Spyderco Knife of the Year 2016

These should be added to the 2016 releases since they've recently shipped:
In the list of post #1 these were technically at dealers in December 2015:

Why ?
Hallow Grind, not the cheap looking and cheaper flat.
Carbon Fiber Laminate, well at least there is some carbon fiber to add a nice look. Could have just used all carbon fiber but there's more profit this way.
Liner lock, yea its my preference.
Tip-Up/Down - Left or Right --- Common Sense thank you.
No B.S. clip, not the wire, not some crazy looking modern art piece but the best clip, the hour glass, there is only one.
Steel.... tool steel, Thank Gayle.... I guess I'll just keep oiling it. Could have used CPM S30V but even VG10 would have been fine. It is what it is, at least they used good tool steel.
Last edited by zeroed4x on Sat Dec 31, 2016 8:42 pm, edited 1 time in total.
Top

Manix S110V G10.
Love the size, ergo,lock, steel,skeleton liners, dark blue G10, its stainless.
GB2 is my second.
Classy, beautiful grind and blade shape, excelent slicer.
I wish it was not so serious, "hard work, no fun knife". If its easier to open, hole not cover in handle, easier unlock, plus some stainless steel like S110V. It will be perfect.
Top

My vote goes to the Para3 although that should probably end up on the '17 list with so few people having even held one this year..
(held it at Spydiemeet and loved it, have pre-ordered one but will be way into '17 before that reaches the Netherlands)
Top

52100 Military for me, CQI was perfect and love 52100 steel, also like the scale texture and how lite the piece turned out to be.
Happy to be part of this great forum and group of down to earth spyderco addicts, Thanks Sal and gang.
My Grails: Lum Tanto folder sprint, Sprint Persian(red), Captain, Manix 2 (M4), SB MT, PM2 M390, CF dodo, Manix2 (CF S90V),Manix2 XL S90V, Zowada CF Balance Rassenti Nivarna, Lil' Nilakka, Tuff, Police 4, Chinook 4, Caly HAP40 52100 Military, S110V Military, Any/All PM2 & Military sprints/exclusives I can get my grubby hands on

Yes! So happy to see some love for this little guy! I finally got to handle one yesterday and it is even more beautiful than I imagined. It's still too expensive for me right now which one could argue disqualifies it for KOTY, but it is the only knife I can't get out of my head! Like that cute girl in class that sits across the room, comes from money but changes her own oil, and best of all, her favorite color is blue! If I could just muster up the courage...

One more vote for the Vrango, and for love!
"Be the person your dog thinks you are."
Top

This, closely followed by the CTS-204P Military.
SPYDER SHOTS!
Top

For 2016, my vote is going to go for the S110 G10 Native 5. By far my most carried knife this year. I was really suprised by this and it kind of just happened. I have a drawer full of PM2s that mostly just sit and look pretty with the occasional weekend carry. Come Monday back goes the little Native into the pocket. Here is my New Years wish for 2017, more Native 5 sprints! Looking forward to the Maxemet Native.

Great choices everyone. I wish you all a Happy New Year!

Not too difficult a choice for me! Clearly the Best Spyderco of 2016 for me is the Nirvana.

Other notable favorites for me are the 40th Anniversary Native 5, Pattada (an excellent knife!), Magnitude (the best Carey collab by a long shot!), and the Advocate. As RamZar pointed out, the GB2 and Mantra were Dec 2015 releases but they top my list too!

Huge shout out too to Spyderco for really pumping up production in their expanded Golden facility! The CQI changes on the Military are great (except I think they should not have updated the fluted Ti version), and they certainly came through on the steels we wanted on the PM2 platform (with clearly Cruwear taking the cake!). Here's to a great 2017 folks! Cheers, Radioactive

Gotta be the Nirvana

The 40th Native must be an 'honorable mention' for what it is and represents though
Warhammer 40000 is- basically- Lord Of The Rings on a cocktail of every drug known to man and genuine lunar dust, stuck in a blender with Alien, Mechwarrior, Dune, Starship Troopers, Fahrenheit 451 and Star Wars, bathed in blood, turned up to eleventy billion, set on fire, and catapulted off into space screaming "WAAAGH!" and waving a chainsaw sword- without the happy ending. 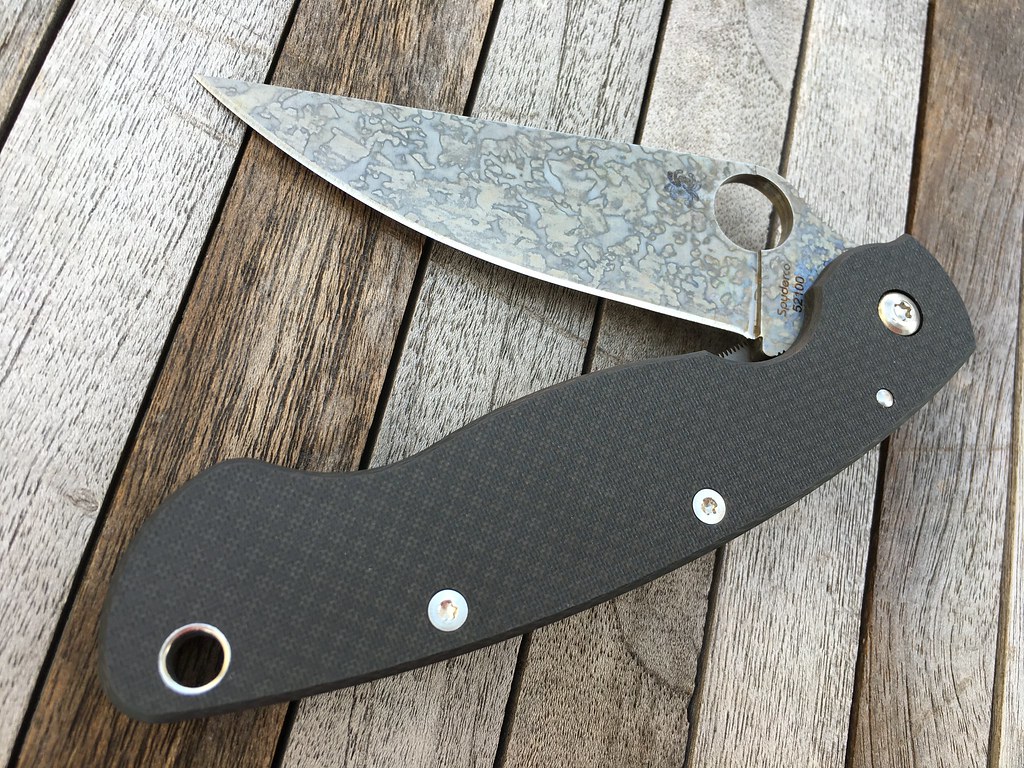