A place for you to post your pictures of Spyderco knives. Read Announcement before posting!
Forum rules
Post Reply
5155 posts

VashHash wrote:Hey donut can we see that lionsteel in the open position. Also looks like there's a cutout for a thumbdisk

Sure, here are some more pictures. I don't think it's actually a Lionsteel, it is the HEST Folder and was designed by Robert Pelton. It is manufactured by Lionsteel.

This is it opened with the blade up. There is a texture on the G-10 that I've never seen or felt, it provides a lot of grip, deeper grooves than the Peel Ply that Spyderco typically uses. The blade came from the factory at near a 40 degree angle on the edge, I think it came 40 degree as ode to the fixed blade it was designed to be like, I reprofiled it to 30 degree yesterday.

Opened, blade down. Not easy to balance this way, it fell a few times. The notch you're talking about is a bottle opener. The bottle opener doubles as a Wave opener. This knife has some hidden uses. The jimping is said to double as wire strippers. I think the notch under the blade can be used to bend or break wire. It has a big clip, rides pretty low in the pocket but the clip makes it fairly obvious. The clip is actually going up against pretty smooth titanium and it doesn't have too much grip. It is possible that it can slide out of your pocket. To support the lock, because of Lionsteel, it comes a screw that makes it so the lock will not disengage. The lock is very strong and I'm not really sure why anyone would use the screw.

Has a pretty thick layer of titanium for the lock bar and a very skeletonized layer of what I think is titanium to support the G-10, I like how the skeletonized side is. I'll talk about that in the next picture.

This is a picture of how the G-10 scale is supported. It's one big hole in the liner, which can bend some, but I think the G-10 side is supposed to bend some, so I like how this feels.

People ask me how big it is and I tell them it is small, it is delica sized but thicker. I sense a lot of disbelief when I say this, so I want to post a size reference.

Handle is just as long as the Delica's. The handle to point distance is pretty close to on par with the Delica, but because there is so much curvature of the blade, I think there is more cutting edge, probably closer cutting edge to the Para 2 or Manix 2, also pictured here.

Here you can see the very tip of the HEST, below the Delica edge! There is a lot of drop to the edge.

With some light and a better view of the HEST tip. This is closer so you can see the size reference to the smaller knives. Excuse the dust!

I´ve been watching this forum for a while...Now I purchase my first Spyderco and I can clearly say that I am in love !! Thanks so much guys !!

Gtavares wrote:I´ve been watching this forum for a while...Now I purchase my first Spyderco and I can clearly say that I am in love !! Thanks so much guys !! 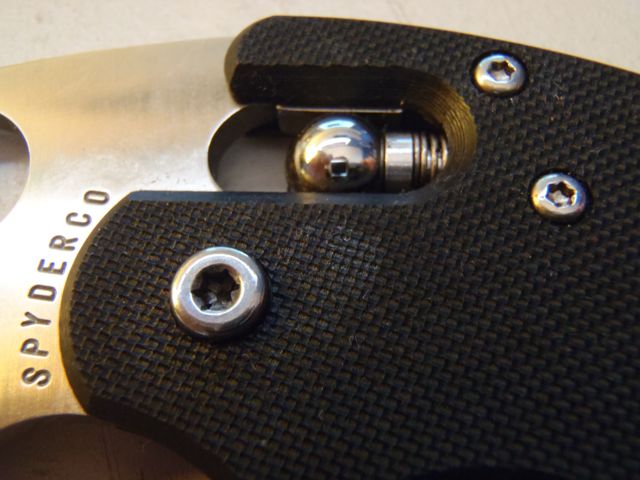 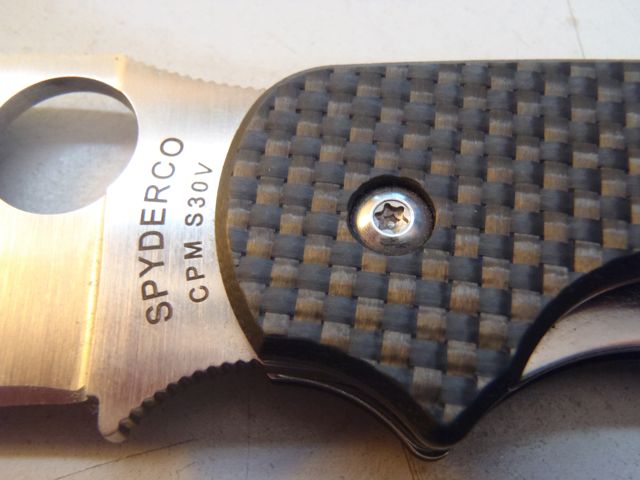 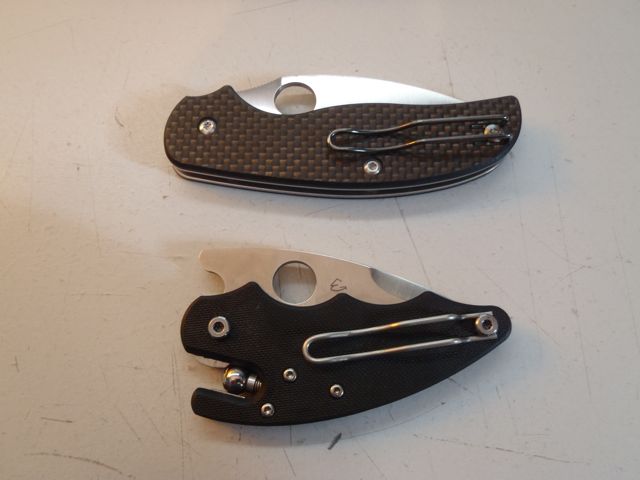 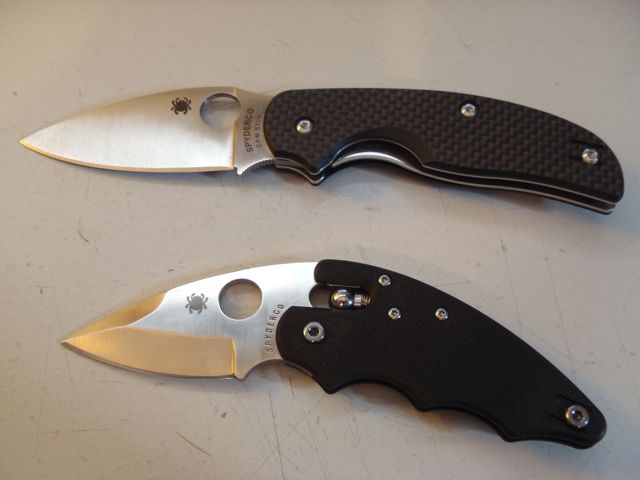 "You could have opened that with your hands." "Ya, but this knife cost me $60...the hands were free.":spyder:
Top

Got these two in the mail which i've been eagerly waiting on!!

Then all my current spyders

**** that thing is burly....i love it. It's not often you see a heavy built folder in a smaller Delica sized package. If that thing was a Wharnie i would be all over it. How thick is that blade?
SHARPEN IT LIKE YOU LOVE IT, USE IT LIKE YOU HATE IT
~David
Top

I think the specs say 3/16" to match what the fixed blade is. 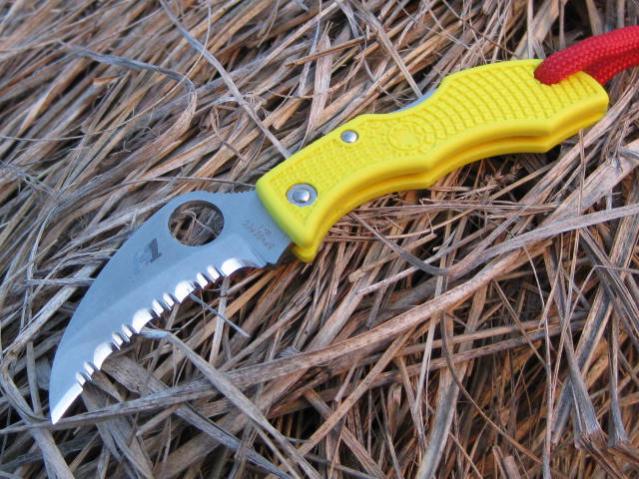 Here is my latest Spydie in Play by Play mode 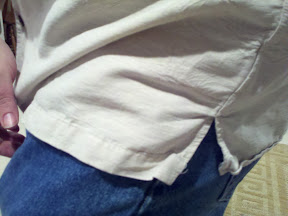 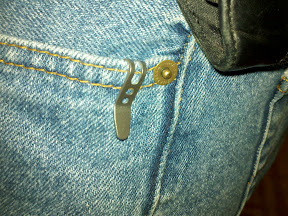 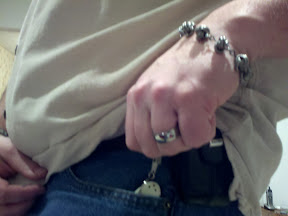 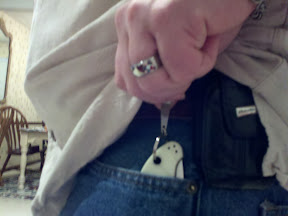 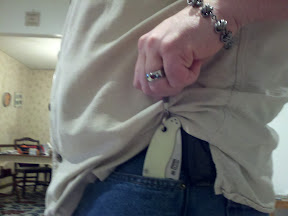 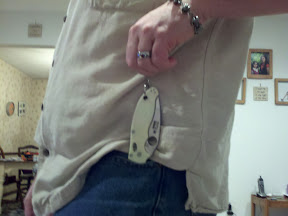 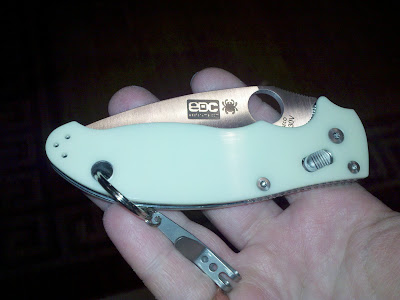 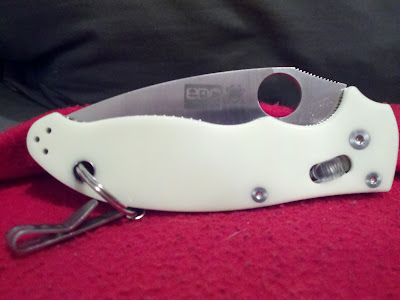 And there it is in all its new awesomeness!!!
Top

Got a SuperHawk yesterday and LOVE IT !!!

And there it is in all its new awesomeness!!!

Won't carrying it like that prevent it from glowing?

Donut wrote:Won't carrying it like that prevent it from glowing?

It definitely won't charge while it's in your pocket, if that's what you're asking.

I just ordered a ladybug hawkbill H1, I'm way pumped. It should go perfect with my spyderhawk

I'll get pics up as soon as it comes in.
:spyder:My mind is the sharpest weapon I have, my spyderco is the second!;)
Top
Post Reply
5155 posts