Another vote for the Rhino. I did add a Bugout clip to mine though. 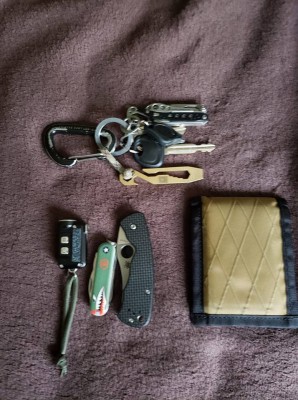 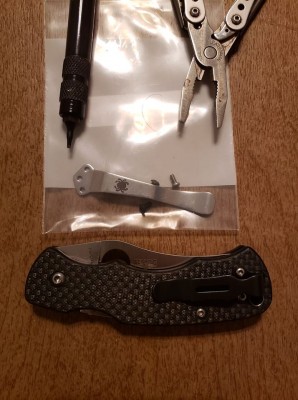 JuPaul wrote: ↑
Wed Sep 23, 2020 9:08 pm
...I even offered him my brand new cruwear Delica, my Sun and Moon Chap, or my hawkbill dragonfly, but I still failed to get a Spyderco into my husband's pocket. He actually came to me wanting to look through my collection for a new knife - specifically for something small, slim, and really light that he could carry in his lightweight shorts. Alas, turns out he doesn't like backlocks, which rules out most of the small frn spydie lightweights (para3 lw was bigger than he wanted).

So I guess my point is, there's a gap in the spydie lineup that could be filled by something like a lil native lightweight comp lock, or a mini Manix lightweight.

Am I missing any other small non-backlock lightweight spydercos??

Look at these marvels.
I Pray Heaven to Bestow The Best of Blessing on THIS HOUSE, and on ALL that shall hereafter Inhabit it. May none but Honest and Wise Men ever rule under This Roof! (John Adams regarding the White House)

The Rhino seems to fit the bill pretty well indeed... in some dimensions it is actually very "Chaparral FRN-ish", while featuring a comp. lock instead of a backlock:

Same closed length, almost the same amount of edge (2.29 vs 2.35), just a bit heavier (and has a thicker blade, which I would not like)
But: Much shorter actual blade (2.37 vs 2.8), cause the Rhino has no choil.. so, just going by my male L to XL hands and assuming Julias husbands have roughly the same size, I figure the Rhino must be more or less a three finger knife, right? (Since the Chap would be just that for me without its choil to choke up on).

That does not have to be a bad thing, don´t get me wrong, but can be sufficient for the tasks such small knife gets used for!
Just something to consider. (But still amazing: The Chap, while having the exact same closed-/handle length as the Rhino, manages to fit a bit more edge AND a full sized finger choil into that same length handle..)
Top three going by pocket-time: Endura 4 in VG 10/Micarta-scales; Stretch 1 in VG 10; Endura 4 in HAP 40
Top

Hey Julia, tell hubby to buy himself a Military and stop being a woose.

I really think this is the way to go, if you can convince him to try. Just judging from my own friends that are slightly knife interested, both the back lock and the Spyderco aesthetics isn't something that intuitively appeals to them. And it's often something that has to be experienced before they understand the beauty that lies beneath.
Top

...But in general, I'm all about high performance, Ergos, safety. That's why I've been accused of "deigning in the dark"...


I thought of the Ambitious too already... but I am afraid both this and the Alcyone are not light enough for him, since the Lil Native comp. lock is not either... sounds like what he'd want is something like a DFly or Chap FRN, but with liner, comp. or CBB- lock...

Maybe even a fictional comp. lock Native LW or comp.lock Delica, since both have a slightly smaller footprint than the Para 3 LW (which is "too large" for him) and are a tad lighter?

I definitely will.
- Julia


I thought of the Ambitious too already... but I am afraid both this and the Alcyone are not light enough for him, since the Lil Native comp. lock is not either... sounds like what he'd want is something like a DFly or Chap FRN, but with liner, comp. or CBB- lock...

Maybe even a fictional comp. lock Native LW or comp.lock Delica, since both have a slightly smaller footprint than the Para 3 LW (which is "too large" for him) and are a tad lighter?

Yes. Something in that under 2-2.5 oz range seems to be the size he wants. Something for around the house in basketball shorts that won't flop around in his pocket. A chap, a dfly, or a lil native with frn AND a comp lock would be perfect.

The Lil'Native might do the trick even though it's not frn. Possibly the Rhino if he likes the trailing point blade.
- Julia

I know what you said regarding locking systems but over the years the one model I've had success with getting "non-knife" type people to try and end up liking is the GOLDEN, CO NATIVE model. And at one time I had 4 of the ZDP-189 Delica models of which 3 of them I put in the hands of people that are not so enthusiastic about knives and I never had anyone want to give me one of those back either.

Those may not be what you're looking for but it's at least a place to start. Also I've noticed that a lot of guys and gals out of my era ( Jurrassic

) tend to like Spyderco models that oddly enough don't have a pocket clip. I guess the reason for that might be that it would remind them of "dad's" or "grandpa's" old Case folder

But do let us know how it works out.
Top

Only because of the preference on the liner lock, otherwise a Tatanka would fit the bill...
Top

Hallelujah!!! I never thought I would ever hear Brother BLOKE singing the praises of a full sized, GOLDEN, CO made flagship Spyderco model !!!

Hey another thing you might try Ms. Julia would be to start him out on a modest sized Spyderedged model. Something like a NATIVE, DragonFly, Harpy or just a "plain Jane" Delica for that matter. Because I'm finding that many non-knife people are starting to respond positively with a Spyderedged model of some sort for their first EDC.
Top

My wife is the same way. I had a fairly decent sized collection of SAKs and other knives, in addition to my handful of Spyderco's, and she wouldn't budge from her Vic Classic.
Barry

For the word of God is living and powerful, and sharper than any two edged sword

Do what you can, where you are, with what you have! Theodore Roosevelt
Top

How about an Ambitious or an Efficient as a gateway model?
Top

Yeah, I should probably just go ahead and get him a Watu, and if he doesn't like it oh well, I guess I could take it if I had to.

Haha! The shoe is on the other foot now, isn't it missy! Yours is the dilemma that we gentleman have been trying to deal with since... since... Atouk the caveman dragged home a saber tooth cat skin for his wife Kaltaka's birthday. "Oh, honey, it's beautiful, but I really wanted the tan one. Can you return it?"

If I was looking for a small knife that wasn't a backlock, I'd definitely be looking at the Lil' Native. My wife and I, when faced with similar dilemmas, joke that we'll just get it engraved with "Homer." (Obscure reference to old Simpsons episode where Marge and Homer go though this sort of thing)
Top

I'm going to commit a sin here and recommend something outside the Spyderco lineup, that I recently acquired...a Civivi Elementum. Small, lightweight, snappy action with the flipper, plenty of options on BHQ and also under $70 so it's not a big hit if he doesn't care for it much.

I haven't cut anything with mine yet, but I've carried it a few Saturdays and fidgeted with it a bit. I think it's a great deal for $63
20

Everyone ignore what I'm about to say: I've been carrying an inexpensive Chinese made Kershaw Natrix as a "self defense knife that I won't mind if I lose it or destroy it" and it's not a terrible knife. I carry it with gym shorts and it's pretty light and a liner/frame lock.

I used to carry a G-10 UKPK Drop Point or a Carbon Fiber Dodo to the gym. Both are on the limit of how light a knife can get. There is minimal steel other than the blade and lock.
-Brian
A distinguished lurker.
Waiting on a Squeak, Pingo, and Cliptools with a Split Spring!
Top

I'm sorry I'm afraid there's only one solution here. Gotta divorce this guy and start over.
SHARPEN IT LIKE YOU LOVE IT, USE IT LIKE YOU HATE IT
~David
Top

JuPaul, your husband needs an intervention. Bring him here and we can all sit down and explain the Way of the Hole and True Path of the Lockback.

Used to be JR in CT with a much earlier join date.

Wharnie for the whin! Friends call me Jim. As do my foes.
Top
Post Reply
86 posts