The Show youre manixes thread.

A place for you to post your pictures of Spyderco knives. Read Announcement before posting!
Forum rules
Post Reply
167 posts

The Show youre manixes thread.

I am a manix addict so i would like to show the manix part of my collection.
So here they are on my top shelf.

I hope all of you manix fans join me and let us enjoy all those beautyfull colorado made tanks. JohnnyGeek where did you find that manix 2?

Are the saber grind manix's a thing of the past, I have one that I put after market scales on, thinking I should put the old scales back on, and get another full flat grind for the custom scales....just from a collector standpoint. Relatively new to this, is that what you'd do....
Also love that cru-wear Manix....see them for big bucks at the bento box shop...still very tempting.
Top

And all I have is this one. If it wasn't for the fact that the Civilian and Paramilitary have my attention, the Manix series would!

JohnnyGeek where did you find that manix 2? So much Beautyfull pictures guys!
I love the used manixes! of my 8 manixes at this point 2 of them are real edc's.
The Big manix 1 is my around the house and in the forrest edc. I love the scratches on him aswell it gives him a " I have gone to war look "

The other is my bd1 lw. I carry that one every day everywhere! When the Big brother steps in it still is a side kick.

Could possibly be my favorite model overall, but I've had a lot of catch and release issues with them so I currently only own the S110V LW. Here's a bit of a timeline story..

My first Manix 2 I owned for such a short time, I think this may be the only pic I ever took of it. 154CM and I do not have a fondness for one another...and that's putting it lightly. When this knife came out I was very new to the brand and had no idea what I was getting into. I bought it on impulse at my local knife shop, carried it for a couple days, and sold it back to them for a Para 1. It was a combination of the steel, which I just never liked despite so much praise and love, and the super low hollow grind which I loathed.

Then one day years later while hanging out at my local shop (you know it's bad when you just stand around and BS with the owner and fondle random knives) a fellow customer came in who had ordered a DLC Manix 2. The owner had ordered 2 of them, and the second one went home with me that day. I had previously owned a DLC Para 2 which I absolutely loved, and this knife very much reminded me of that Para. So, despite my loathing for the low hollow grind, this was at least S30V, so I gave it another chance. That, as they say, was all she wrote..

That eventually lead to scoring some skeletonized liners to swap into it, in an effort to lighten it up. I was also never really fond of the crazy jimping all over the place, so that got modded as well. I didn't care much for the silver liners in an otherwise blacked out knife, but it worked ok I guess.

(this knife works so well with the zip tie mod)

It turned out to be a very well balanced knife with skeletonized liners.

Because of my newly rekindled love of the model, I had to find one that was FFG. The DLC version was put back to original with the black liners and eventually sold once I got a FFG version. I happened upon the M4 version NIB for a good price so I had to jump on it, which stayed original for about an hour before the mods started..(collectors may wanna look away).

And it eventually became this. I RIT dye the G10 to be a more dark khaki color, forced a patina on the blade, swapped in my smooth out jimping scales, and gave the blade a horizontal brushed finish.

The brushed blade came on accident after trying to clean off a bit of light spot rust...I had a brain fart and didn't consider what a scotchbrite pad would do to the patina (duh) but once the first scratches were there I just rubbed the whole blade and I kinda liked the end result.

Unfortunately, I had this really odd issue with this knife on my Edge Pro one day, and just typing this out and reliving it all honestly makes me sick to my stomach. For some reason the bevel began to develop a "kink" in the curve of the edge, and I could not get rid of it. It made my OCD go crazy and I worked it on the EP until I was able to bring the edge back to a smooth curve again. By the time that was over, it had lost a ton of metal and most of the belly, creating this weird almost wharnie type shape to the edge. Despite my love of wharnies, something about how the blade looked after this ordeal just made me sick to even look at it...I'm still upset over it to this day. I ended up selling it on Craigslist. Such a shame too, I especially loved those khaki scales. I think if I ever do a S110V blade swap, I'm going to try to find some more of those tan scales and dye them again. I really liked that color.

Here's the blade horror, as compared to my other Manix 2 which I hadn't sold yet.

So that pretty much ended my Manix 2 run until the S110V LW was announced. This is still to this day one of the only Spyderco knives I've ever ordered off the internet without ever having handled first. When the original LW was announced, I really loved the clear handles of the prototype, but then didn't care much for the blue of the production version, and wasn't really drawn to the steel. Then, the lack of liners kinda put me off too. For the steel though, I had to try the dark blue version, and I'm so glad I did. After about a year or so of use now, I don't have any fear of it not having full liners, and it has been a joy to own and use.

(it sure isn't a very photogenic knife though)

One day though, I will make this knife a reality...of sorts. My favorite Spyderco handle design is the Yojimbo 2, but my favorite blade shape is the Manix 2. I want the handle of the Yo 2 and the blade of the M2. So, one of these days I'm going to mod a Manix 2 handle as much as possible to be the same shape as a Yo 2 but with a CBBL lock. Someday...

I thought you were going to say you sold the stock one with the skeletonized liners.

Nice knives. The two that are in my carry rotation are the Cruwear and my Green M4 one. I traded away my blue one a few months ago, and I probably shouldn't have, but I really don't miss it. I NEED to find myself a cage. I tried to disassemble one (XHP reground with titanium scales)... and one of the pivot screws got stripped, and I ended up breaking the cage to get it apart. Someone let me know if they have a line on a really messed up Manix 2 (broken blade would be great) that someone wants to get rid of.

Nice "photoshop". I wonder if the blade would fit in the handle at all.
-Brian
A distinguished lurker.
Waiting on a Squeak, Pingo, and Cliptools with a Split Spring!
Top

Ive only got the one manix. I really like it and im sure there will be more to come. 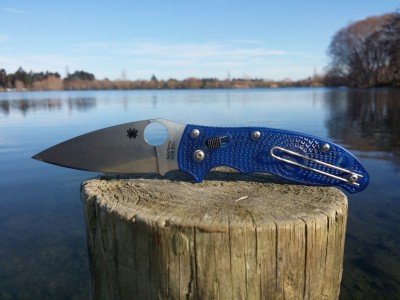 What a story and pictures Evil D :O
The blade of youre m4 reminded me of how i messed up my Tenacious

Never goint to do that again.

Nice manix gingeminja! where is that beautyfull lake/river?

I should take pictures of the S90V Mule that I messed the edge up on and spent forever trying to fix it.
-Brian
A distinguished lurker.
Waiting on a Squeak, Pingo, and Cliptools with a Split Spring!
Top

I like all three of mine, all are slightly modded

Thinned out and scale jimping removed: