by TkoK83Spy
My buddy at work just text me, he got home and his knife was in his mail box. He's going to bring it in to work tomorrow. I'll bring one of my PM2'S to compare it. I can't imagine an $18 knife comparing to an actual PM2!! He seems to think it's quite similar to what he's seen from mine. I'll provide some comparison photos.

by BornIn1500
If you can find someone who never heard of Spyderco or Ganzo, please present them with both knives. That way the person has zero bias. Ask them to handle them and then ask them to guess the prices. It's a fun little game.

I don't think you should go into this trying to compare them. Take it for what it is. Ethics/morals aside, it's simply a PM2 silhouette with Ganzo's own inexpensive spin on it. It's not attempting to be a counterfeit.

by TkoK83Spy
So I've got the Ganzo knife in hand. Honestly, it really does "feel" like a PM2. Granted the scales are smooth and a bit slippery, they are also slightly thicker. As mentioned before, these scales actually have a bit of chamfering around the edges which is a nice, subtle touch.

I brought in my Torx bit set and some lube because he told me it was a bit stiff. Loosened up the pivot a bit, gave it a little lube and a small drop to the "axis lock" as it sounded like metal on metal grinding and didn't disengage very easily. The action on this thing is actually pretty good now after playing around with it a bit. The blade is still centered and there is hardly any side to side play. Something about it doesn't sound quite as convincing with the lock up compared to the PM2 with the compression lock. I'm not sure if that's an axis lock thing or if it's this knife, as I don't own any Benchmade knives.

The 440C steel is actually ground very evenly and is shaving sharp. There is no jimping on the underside of the choil and the jimping on the thumb ramp is rather large and chunky.

I have to say...If I wasn't a Spyderco nut that didn't care for the top notch quality of all aspects of the PM2 that Spyderco provides, and I was just getting into knives...I would have no problem paying $18 for this knife. From what I've seen, it's totally worth it. 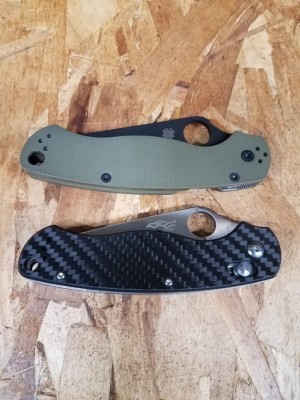 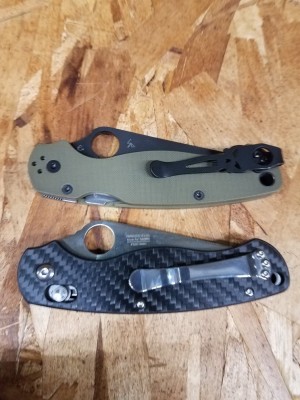 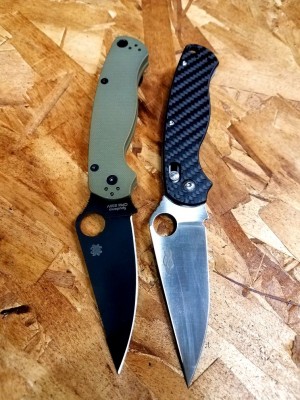 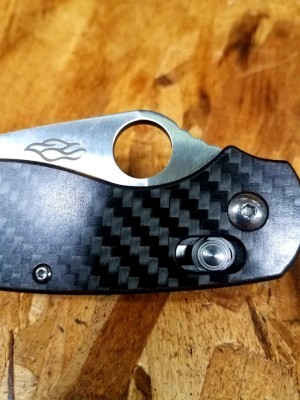 by Wartstein
One sad thing for me or better one I personally don´t understand (though I don´t want to critisize it, to each their own): There are not too few people as far as I see, who own both quality knives (like Spyderco) and cheap ones like Ganzos. And the ones that get really used (and are their "users") are the latter, while the quality knives, perfectly designed for the task and to withstand the test of time,are too precious to become scratched and beat up and sit at home at the shelf...

Again, I can see that´s just a different approach, and beeing a sole collector of quality knives but user of cheap ones instead is ok of course if one likes to do so. I personally just can´t imagine that I would NOT want to really use all the great knives I have,and so each of my at any point of time around ten Spydies gets used regularly for about any knife-task (except my back up second Stretch 1 in VG10, which I only have since this model is discountinued)

by TkoK83Spy
I hear ya on that one. Yea, I'll buy an expensive Spyderco knife and baby it for a week or so...but then I want to use it! I can't spend that kind of money on something, not to see it's potential or why it costs what it costs.

My friend has been using his Ganzo and seems to enjoy it, maybe I can get him cross over to the dark side and join us! Baby steps.

by TkoK83Spy
Last night my buddy texted me to see if I could touch up his knife for him. He also mentioned it sounds like something is grinding in the pivot area. Came to work armed with my Sharpmaker and Torx bits. On break this morning I went over to his shop to check it out. The knife came apart quite easily, though the axis lock is something new to me and one of the springs went flying when I engaged the lock without the scales on. Luckily it landed right on the table.

This is where quality plays in with this knife. It has one bronze washer, that after cleaning the access gunk...seemed to be a bit pitted. Him being a maintenance tech, took it and smoothed it with some fine grit sand paper as I cleaned up the rest of the knife. The washer isn't mint, but better than it was. To my surprise, the other washer appears to be a white, teflon washer. I couldn't believe they used a different washer on each side of the blade!

I put it back together pretty easily and moved onto sharpening. I applied some Sharpie to see where it would hit on the brown stones at the 40 degree settings. To my surprise, it was quite even on both sides right at the edge. I've never used 440C steel before, but it touched back up to shaving sharp within 10 minutes.

He likes the knife, but after fiddling around with my PM2, he likes the compression lock better than the axis lock. He also wants something similar, but smaller...I may introduce him to one of my Para 3's tomorrow and let him borrow it for the day. We may have a new member before we know it!

by The Meat man

He likes the knife, but after fiddling around with my PM2, he likes the compression lock better than the axis lock. He also wants something similar, but smaller...I may introduce him to one of my Para 3's tomorrow and let him borrow it for the day. We may have a new member before we know it!

by TkoK83Spy
I currently only own exclusive models of the Para 3...it actually just hit me this morning when I was deciding which one to bring in for him. Made me a bit hesitant, but I trust him not to use it on anything crazy, so I decided to let him use the BBS/M390.

I brought it in for him to use this morning. He's not the biggest fan of the blue color, but likes the way it fits his hand when choking up. He also likes the shorter blade for more precise cutting based on his first look and handle of it. Have to see what he thinks by the end of the day!

by TkoK83Spy
Well, after letting him borrow the BBS M390 Para 3 for the day, this is what he told me.

He really liked the action and sound of the lockup. The ease of one handed opening/closing (this knife is probably the smoothest of all my PM2/Para 3's) The grip that the G10 provides also rated high. He didn't like that for his hand, it wasn't comfortable if he didn't use the finger choil. His pinkie slips off the back and apparently drove him nuts. He did like the short blade for most of his uses though. He also loved the MXG deep carry clip I put on it...more on that in a second.

So I asked him if he would ever consider this knife, or if the shorter handle is a deal breaker. He said it was, but asked how much the knife costs. I told him, and he

He couldn't believe I let him borrow it coming in at that price! I told him I was trying to woo him to the dark side hahaha. He then said that he imagines the one I have that's "like his" (PM2) is probably more money than the Para 3, and I told him...typically, yes. He then goes on to say that I'm crazy haha.

He asked if he could get one of those pocket clips for his knife, which I said I have no idea and asked how much it was. When I told him around $20, he

again! That's when he said I have a serious problem, that I have a pocket clip that costs as much as his entire knife, that cuts things just as well as these knives. That's where I just laughed it off and gave up.

I don't see him as a new member anytime soon

by BornIn1500
I used to be like him. I viewed a knife just like I viewed other tools like a screwdriver, hammer, wrench, etc. Would you ever pay $150 or more for a screwdriver? Probably not and you'd probably think someone that does is crazy. But now here I am.... having just bought a $200+ Lil Temperance 3. Not everyone is cut out to take the leap to the crazy side with us.

by The Meat man
That's how I used to think as well. For years, I used and carried a $20 Kershaw knife. $50 was expensive, and $100+ was ridiculous. My first Spyderco, the Dragonfly Salt, was a tough decision. But being a steel nerd, I was soon sucked in and my third and fourth Spyderco knives were the Native 5 Maxamet and the Advocate.

Needless to say it's all been downhill from there.

by ugaarguy
This is an interesting one. Clearly the Ganzo model in question is basically a Para 2 with an Axis type lock. But, Ganzo calls that lock the G Lock, and although the Axis Lock name is trademarked, the associated patents are expired. Likewise, the Spyderco opening hole's patents are expired, but the perfectly circular shape is trademarked. Is the Para 2 shape trademarked? Is the perfectly round opening hole the only IP violation? If this knife had an oval shaped hole, would it be legal (in terms of IP) but just in poor taste?

by RustyIron
I have a bunch of top-shelf knives, and recently I bagged a couple Ganzos just because they seemed intriguing. I'm a sucker for the Benchmade Axis Lock, and Ganzo ripped off that idea and put it on some of their knives. The Ganzos that I picked up have the Benchmade-style lock, and some Emerson-like characteristics. At under twenty bucks apiece, it wasn't going to cost much to satisfy my curiosity.

On both Ganzos, the pivot is smooth as glass. Ok, maybe not as nice as a premium knife from a legit knife maker, but it's still pretty nice. One was a little tight, so I loosened it up. It's not bad. The Axis-style locks had a stiff spring, which I was able to reshape. The barbell is also short, but it's ok with the weaker spring. Fit and finish are nice. One of mine has the carbon-fiber look, which is a little too smooth. The one with G10 is as good as you could want. The stiffness of the blade/pivot/handle isn't that of a "good" knife, but it's better than I expected. The blade is 440C, can came sharp enough from the factory. I whipped some nice polishing onto it, and now it has an impressive edge. Not sure how it will wear, as I only carried one of the knives for a couple days.

My takeaway is that the Ganzo is a GREAT knife fo the money. For someone who doesn't care about knives or can't spend ten times as much, the Ganzo is a great option.

by TkoK83Spy
I have to agree, for the cheap price of this knife...it's much better than any other sub $20 knife I've handled.

When I get back to work next week, I'm going to show him the Para 3 LW. He likes the wire clip on the Chaparral and DF, wonder if this knife at sub $100 could change his mind...unless the shorter handle is too much for him.

I'm gonna get him eventually