A place for you to post your pictures of Spyderco knives. Read Announcement before posting!
Forum rules
Post Reply
15 posts • Page 1 of 1

I just returned from a long trip to my home town. In early December, my younger brother was diagnosed with liver failure and unfortunately, he passed away on December 30 at the age of 55. I was with him when he died and he passed away peacefully in his sleep.

It was a tough time for all of us.

After the funeral, we started closing down his businesses and sorting his personal effects. It was exhausting work, so to get away from things for a while every evening, I headed to his shop, which in many ways, was his sanctuary. I cleaned and sharpened all his tools and hung them back on their pegs. I sorted his turning blanks and stacked them above the lathe. I swept the floor and carried out the remaining trash. As I was going through the drawers in his tool chest, I opened a drawer that stopped me in my tracks.

I stood staring at my Brother's knife collection - built over 40+ years. He was a haphazard collector - he had ancient trusty Case knives, some older Buck folders, a few newer Gerbers, Boker, Benchmades, and Cold Steel models, as well as an assortment of "user" knives. He also found switchblade knives irresistible - he had some nice Microtech models, some nice quality Italian stilletos, and some German lever-action models. He also had a soft spot for cheapo flea-market chinese switchblades in all sorts of configurations. Probably sixty total. What a hoot to sort through them.

Then I spotted the Spydercos. He had four of them - lined up in the front of his cabinet. All of them with a patina that you only get with prolonged usage over many years. I had gifted all four of these to him over the past 30 years.

The first one was the original Ecomony/Standard model (C05) in AUS-6 steel. It was infamous for its clip which was punched out of the handle - but which was still revolutionary when it came out. I bought it for a Christmas present to him in 1986.

Next was an original serrated yellow Catcherman (C17) in AUS-8. It served as his primary filet knife for many years. I believe I got this for his birthday in about 1992.

The third Spyderco is the MT06 Mule in CPM-S35VN. I hand crafted some scales for him out of burgundy micarta and made a horizontal belt sheath for it. The Mule survived, but the sheath did not... I gave this to him in late 2010.

The fourth and final Spyderco is the illustrious Paramilitary Sprint in CTS-20CP (C81GGY20CP2) in grey g10. When these originally came out in 2011, I bought two of them. I put burgundy micarta scales on mine, and gave my Brother the other one with its stock grey scales for Christmas. It is possibly my favorite Spyderco of all time. And my Brother's Para proudly shows off its years of loving use. I plan on sharpening it and carrying it for the next few years.

To Sal, Gail, Eric, and the entire Spyderco crew - thank you for sharing your incredible, visionary products with us over these past four decades. 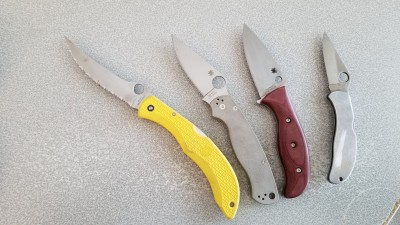 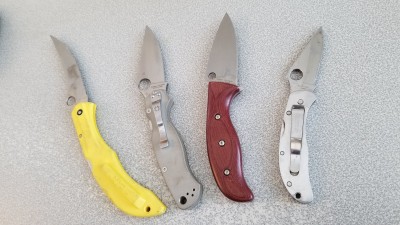 Very refreshing to see your brother used them as tools! I'm sure for most, that PM2 became an instant safe queen. He clearly put that baby to use!

I'm fairly new to Spyderco, only about a year of experience, I've heard about but have never actually seen a Catcherman..that thing is bad a$$.

Had to be a great feeling to see he must have used these knives that you bought him, quite regularly. Thanks for sharing!
Currently have 18

RIP to your brother Ted. Sorry for your loss!
Of all the things I've lost I miss my mind the most!
Top

I'm sorry for your loss, thank you for sharing this story and photo with us.
My Spyderco Pics & Reviews: www.spydercollector.com
Last website update: 05-24-2020 - Twitter - Instagram
Top

My condolences to you and your Family. Dont think the collection could go to anyone better

Condolences!
Sounds like you had some good times with a special brother.
Peace.
Top

Condolences.
55 years old, that makes me Sad.
I hope it gives you some comfort in knowing he used and probably treasured your gifts.
I can't even apprehend what it's like to loose a sibling and I feel for you..
Take care m8.
Dream as if you'll live forever. Live as if you'll die today.
James Dean
Top

Sorry for your loss, bro. Thanks for sharing with us. He was way too young.

Very cool about the knives.

My sympathies for your loss Ted.

Sorry for your loss, My condolences to you and your family. He had good taste in spydies!!
Sprint request: Flat Iron Salt (CE w/ yellow FRN)
New knife request: Police 4 LW Salt!!!

Sorry for your loss Ted, that is far too young

Thanks for sharing the story about the knives. Those will hold a special place in your collection
-Spencer
Top

Users browsing this forum: No registered users and 8 guests