Page 6 of 11
by GoodEyeSniper
nice collection, do you have any fallback users? do you EDC any or pretty much just collect?
by Reject

GoodEyeSniper wrote:nice collection, do you have any fallback users? do you EDC any or pretty much just collect?

If I did EDC one it would be the Perrin Street Beat, a very versatile little knife.

Out bush? A little harder to choose, Temperance 2, Bushcraft and Puukko as a kit. The Schempp Rock is light and would tuck away nicely in a backpack and in wet conditions, any of the H-1 blades would be great to carry and forget, until you need it.

The Temperances would work around a camp, as would the Bill Morans or the Perrins. The new Enuffs feel great in the hand and then you have the Hossom series.

I don’t go bush much these days, when I do, I am going have to decide on which knives to take at least a week in advance. Because if I try to do it on the day,

I will most likely never get out of the house.
by Pockets
The Enuffs and the Aqua Salts look great!
by shunsui
South Fork with a Green Para2 by DRKBC
Wow...most impressive, what a great collection! I am crazy about all the Lum knives and the Ronan is incredible. That said with too many knives and too little money, I think the Forum knife and the Domino are destined to be my next cash drain.

At present this is the only fixed I own and its from a long time ago.

by Reject
The Spyderco Enuff H1 Ser; a knife of mixed heritage.

Like the rest of the Enuff family, it feels solid in the hand.
The handle looks to big for the blade, but as soon as you get it in your hand you will understand why it is made like that. 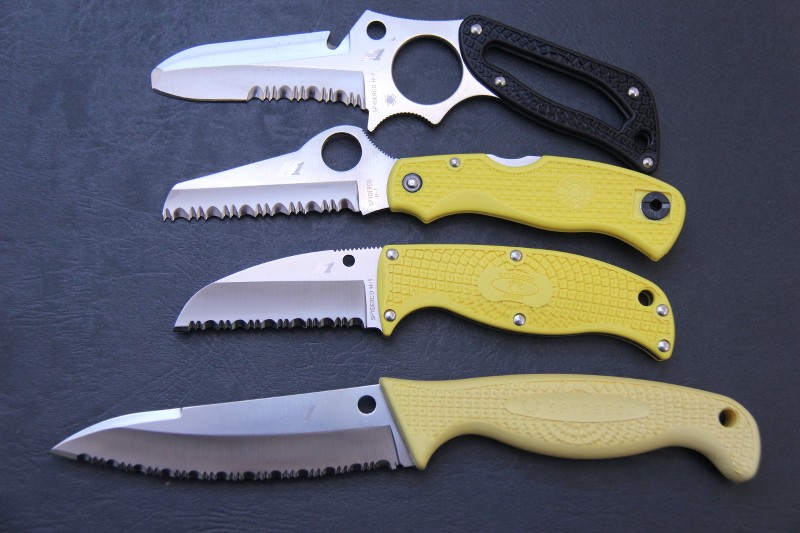 There is on doubt it is part of Enuff 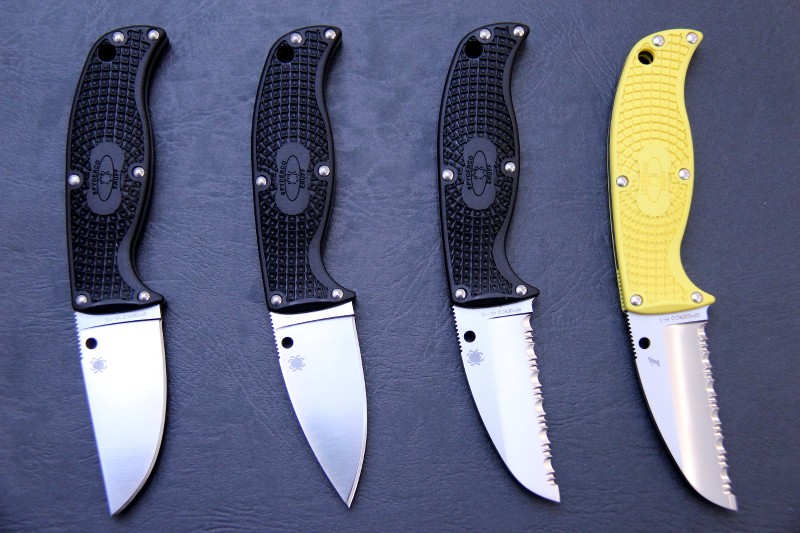 But it is also part of the Salt Family. And as you can see; it seems to be little brother to the Jumpmaster. 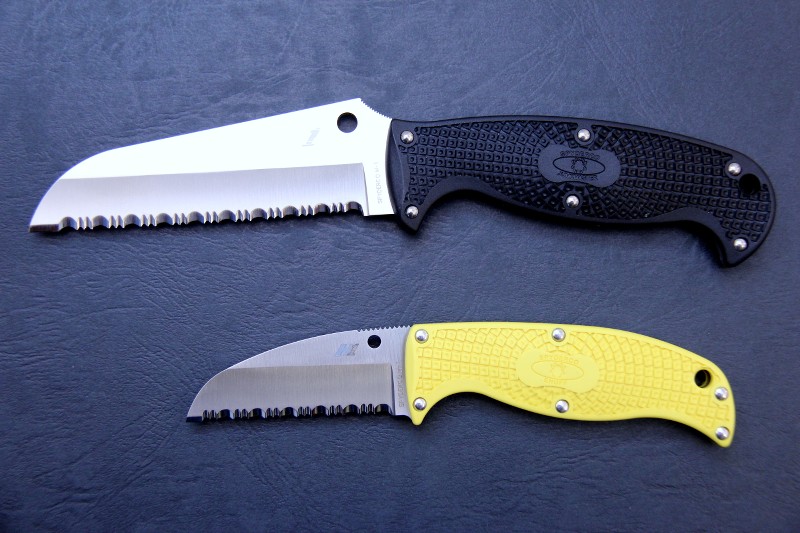 by Reject
The latest edition to my Spyderco fixed blade fetish.

A knife I didn’t know existed until a few weeks back, but I was lucky enough to find one.
First of the Spyderco Swick series, minus the Spydie hole.

The Swicks came about when the people that liked the Spyderco Spot series wanted something a little bit bigger. 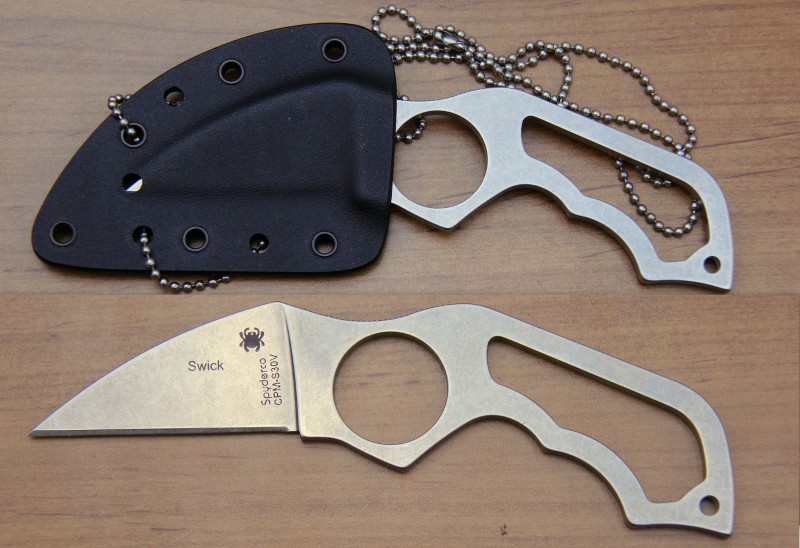 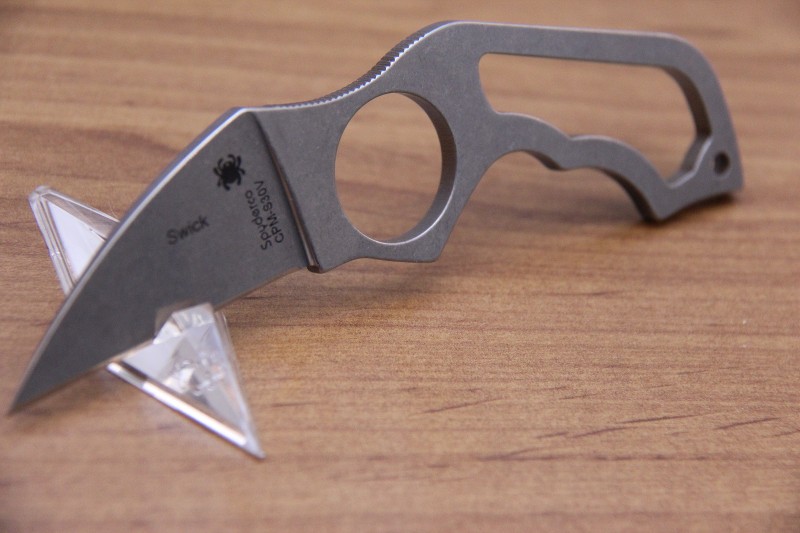 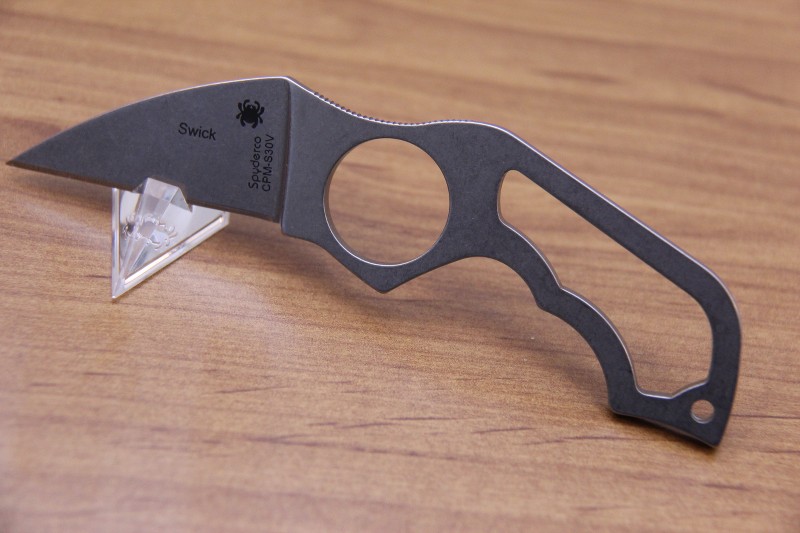 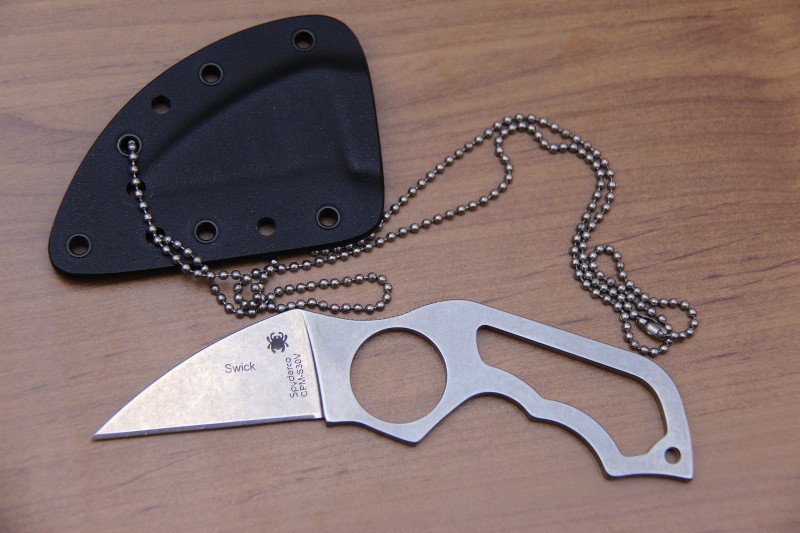 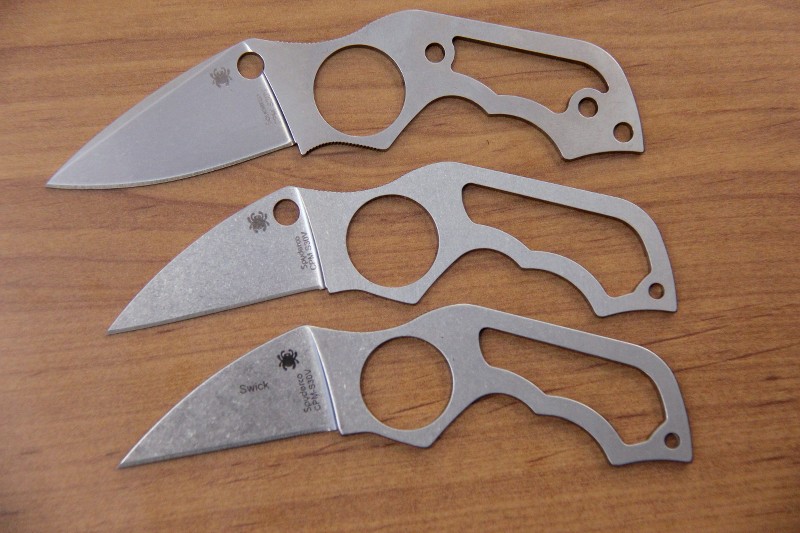 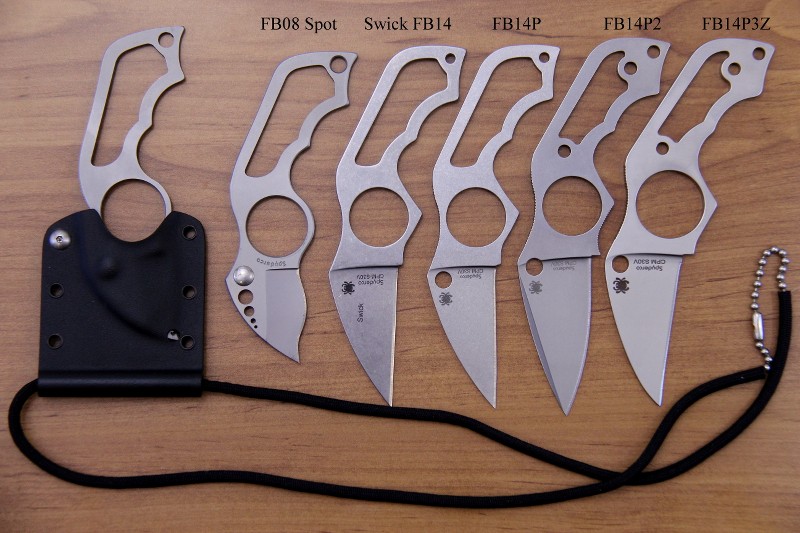 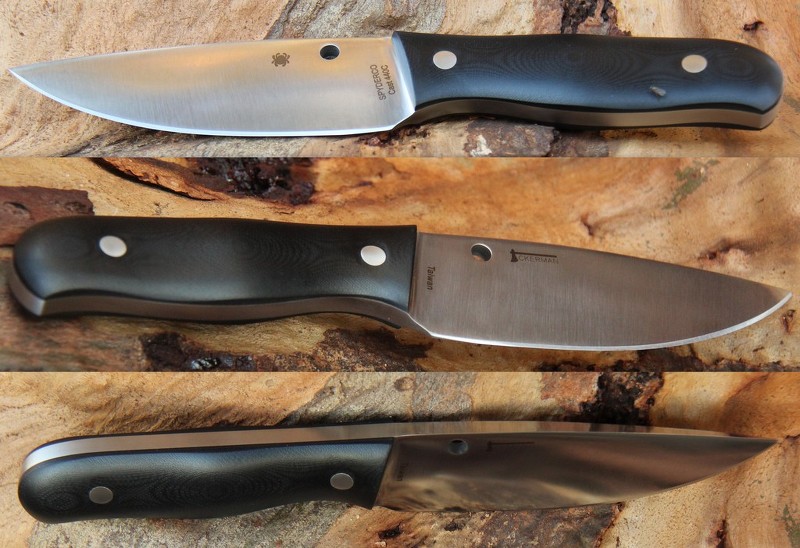 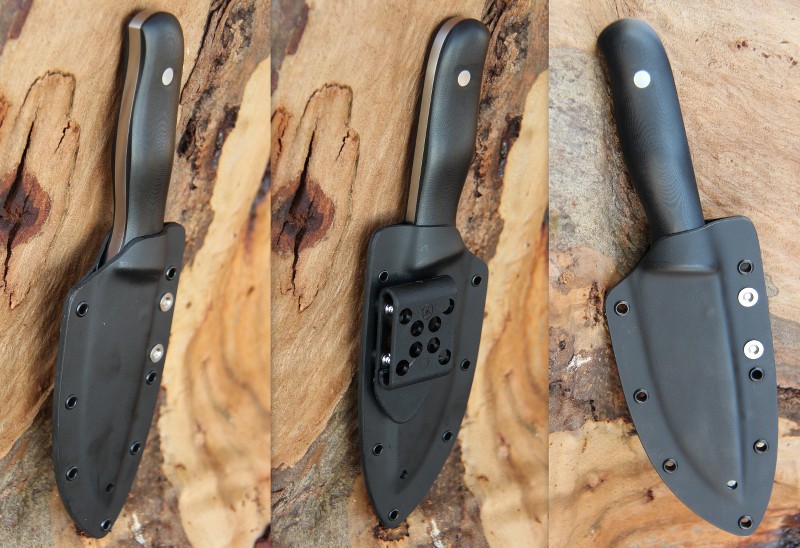 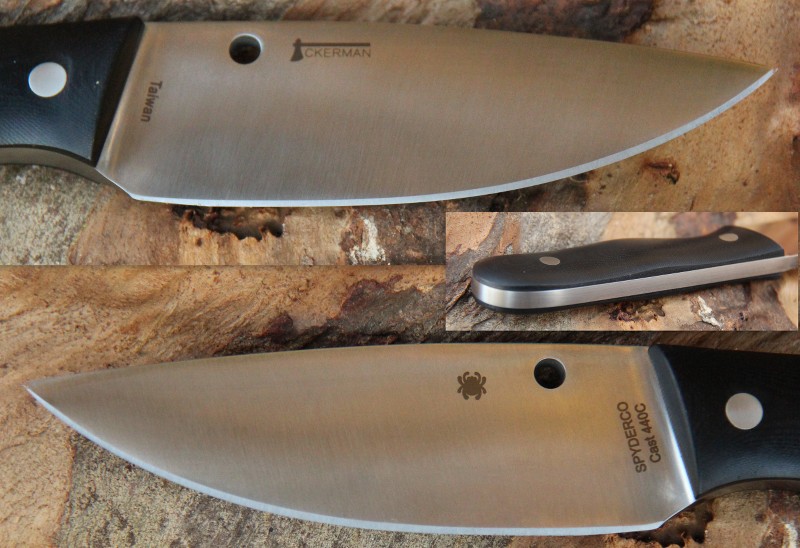 by Officer Gigglez
Good stuff. I like fixed blades quite a bit too, but I can't use them as often as a folder, so they take back seat.
by Ned
What a magnificent collection! I just picked up my first Spyderco fixed blade yesterday...the Street Beat.
by Reject
If you only like pretty knives; turn away now.
This one is ugly!

Strange knife; when you first pick it up it feels like a heavy little beast. Feels maybe; to heavy for it’s size. If I had first handled it in a shop, I may not have purchased it based on that.

But this is where it gets strange, the more you handle this knife, more times you pick it up, the lighter and more lively it feels. Just in the handling of this knife and getting the feel of it, it seems to be coming to live. 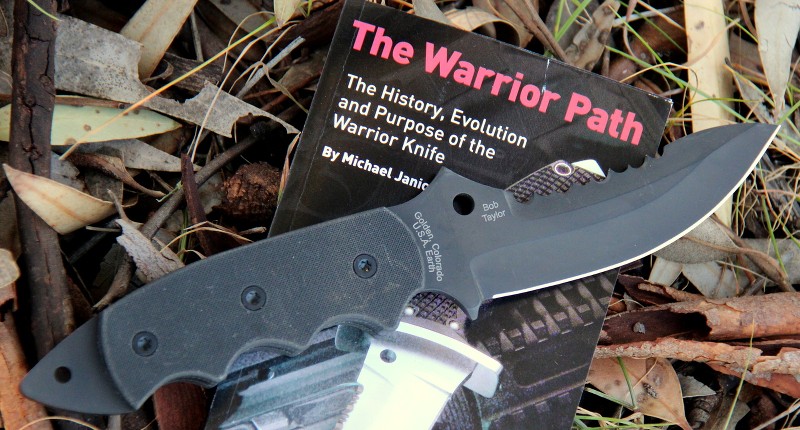 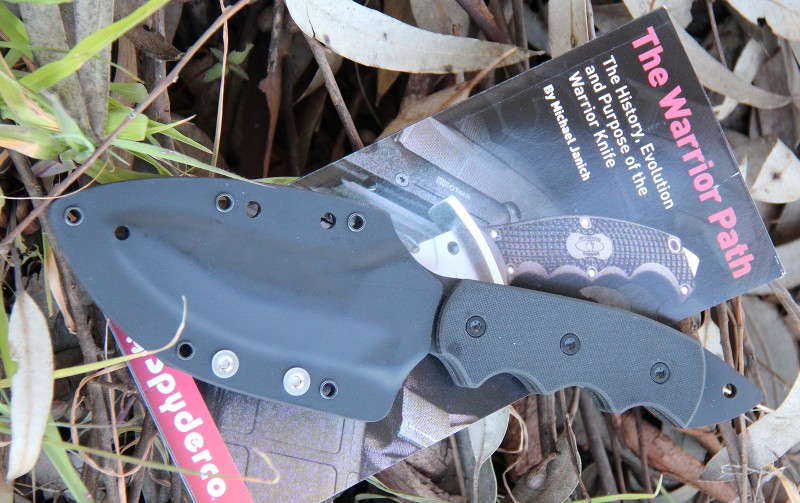 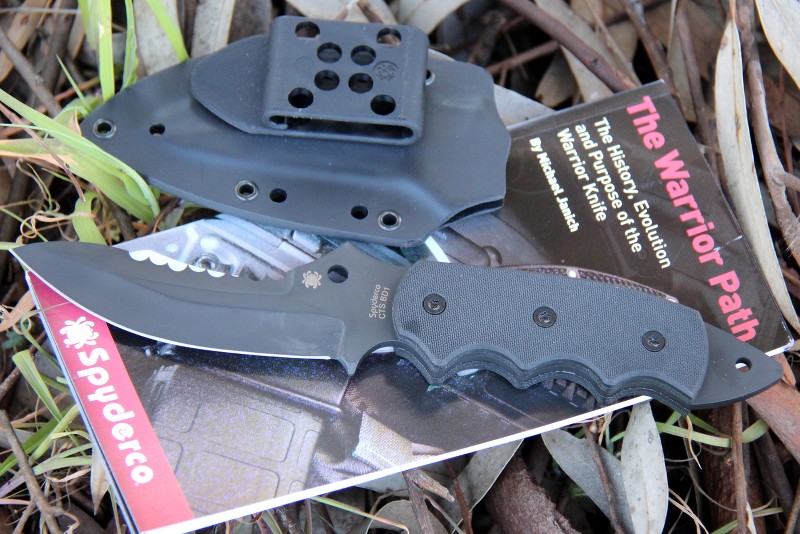 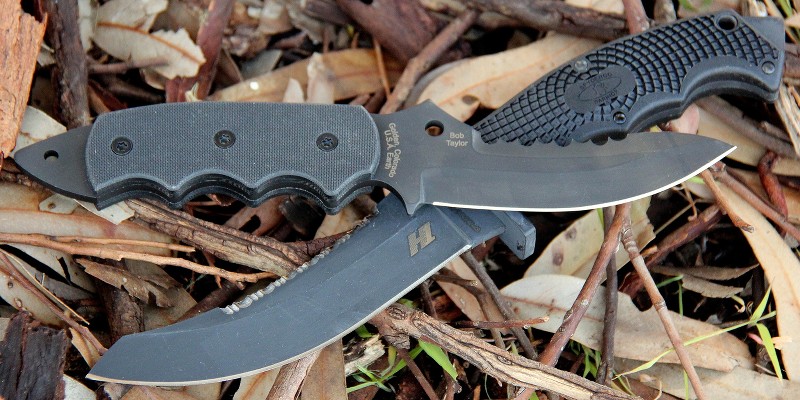 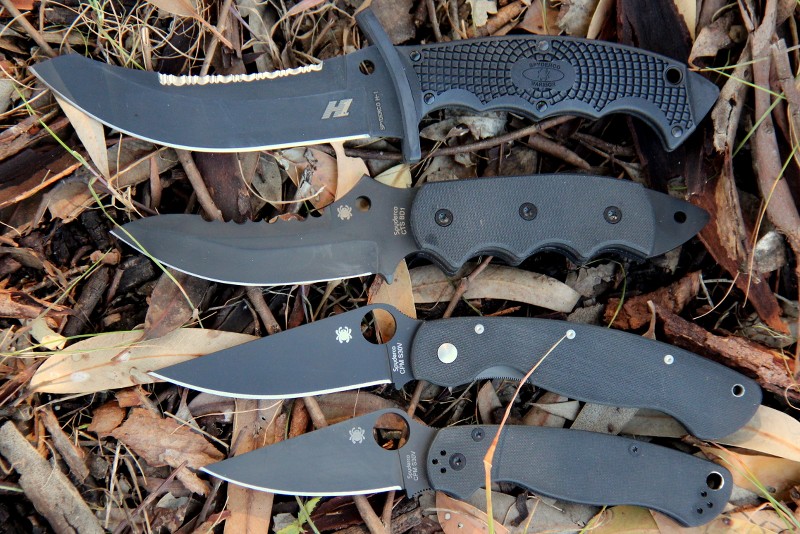 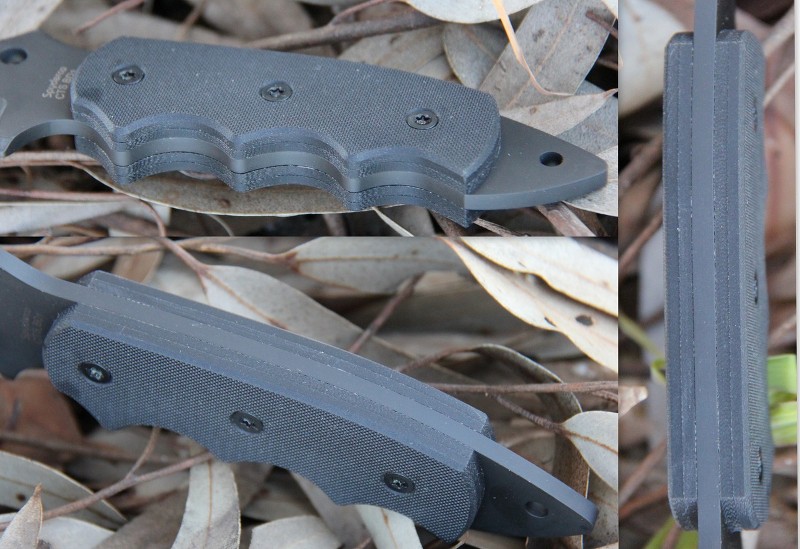 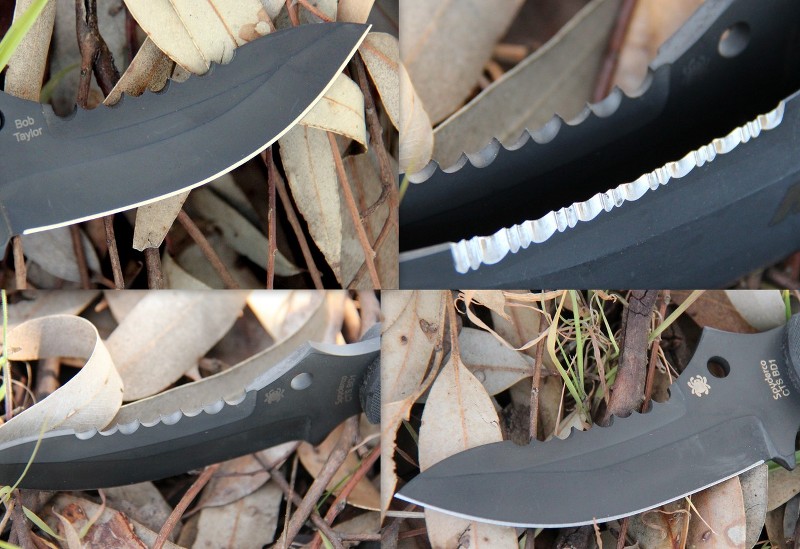 Street Beat was a little big and heavy for me to want to EDC, and a little small & pretty to use as a utility / camp knife.

Bought this as my backpacking knife. Love VG10, love the ergos, and its extremely light for it size. Very happy with it.

by chuckd
So, on the Pygmy, does the second edge on the swedge cut? It just doesn't look sharp from the pictures, especially that picture next to the warrior.

chuckd wrote:So, on the Pygmy, does the second edge on the swedge cut? It just doesn't look sharp from the pictures, especially that picture next to the warrior.

Yep! That’s the story I was trying to tell with the photos of the blade.

It’s a saw blade on the back of this one, not a serrated knife edge the warrior.

by Donut
That's pretty interesting. The pictures look like alternating scallops, but the flat from one side of the blade to the other looks counter productive for cutting.

It looks like you'd HAVE to use JD's serration sharpening method on it.

Do you think you could take some metal off to turn those flats into points?

Donut wrote:
Do you think you could take some metal off to turn those flats into points?

Anything is possible; but you would need to remove a lot of steel.

It’s a saw edge, but you can, using the weight of the knife drag the edge across the finger without breaking the skin. Plus the blade thickens out quickly behind the serrations, so not great for cutting through large timber.

Not sure what the go is here.

Maybe in a bush survival role it would good at notching timber and cut through bone. 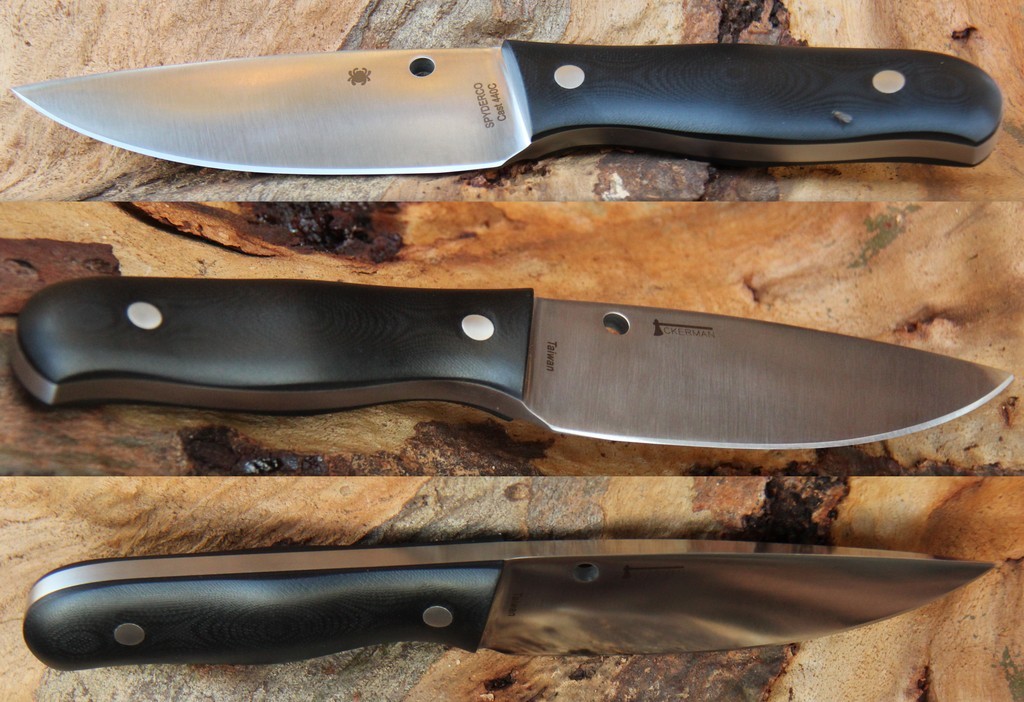 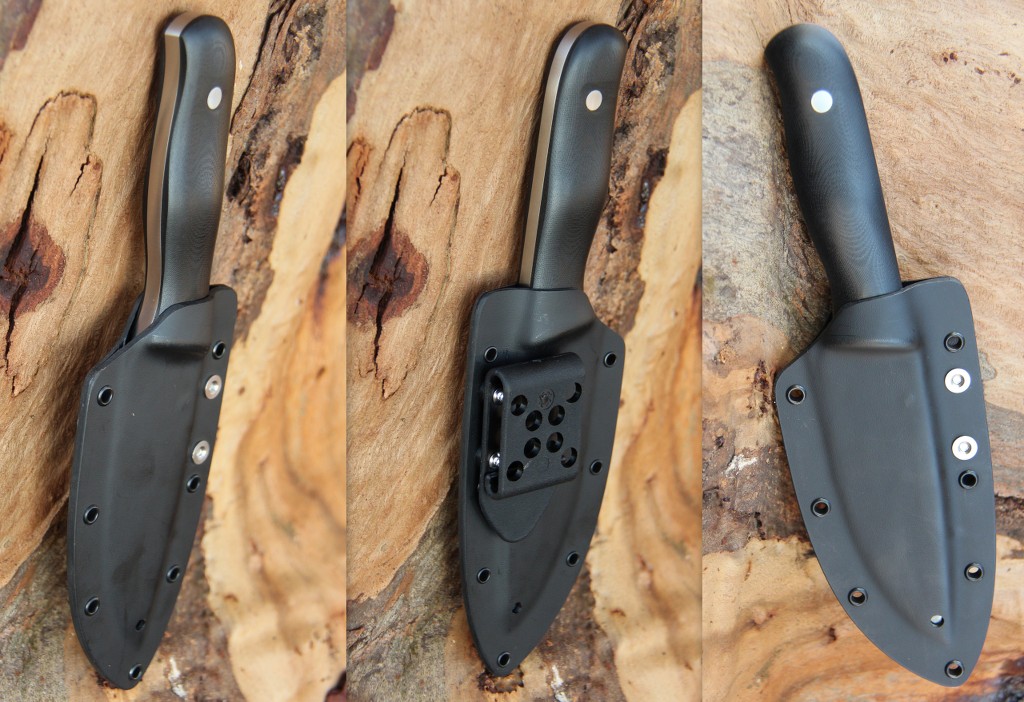 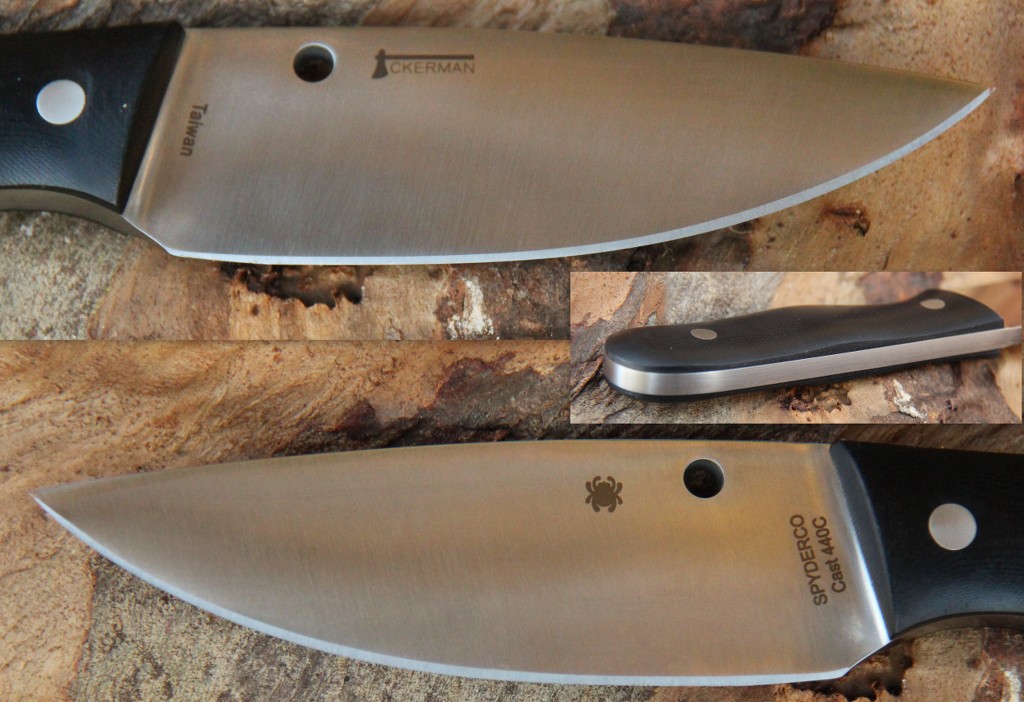 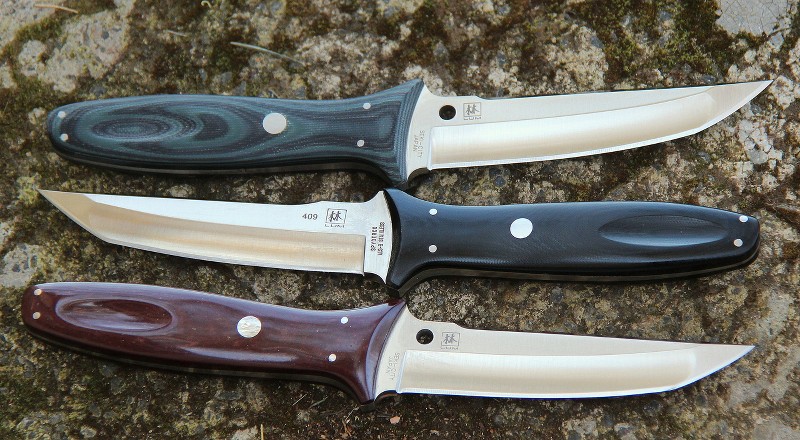 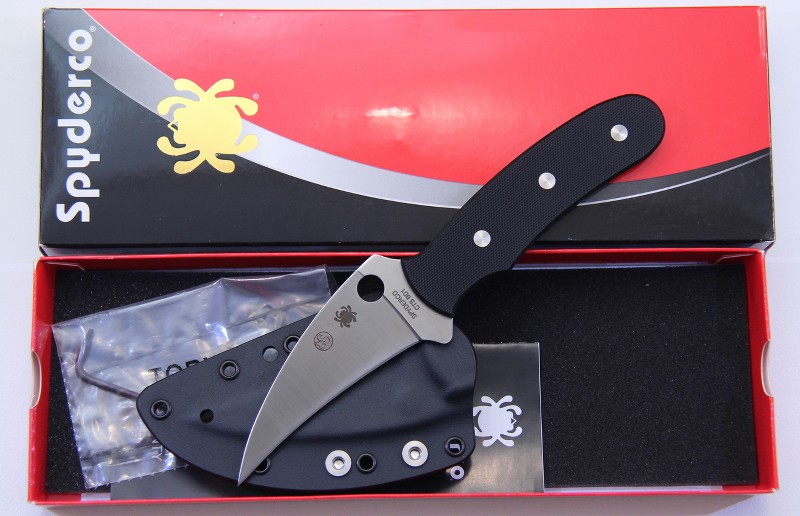 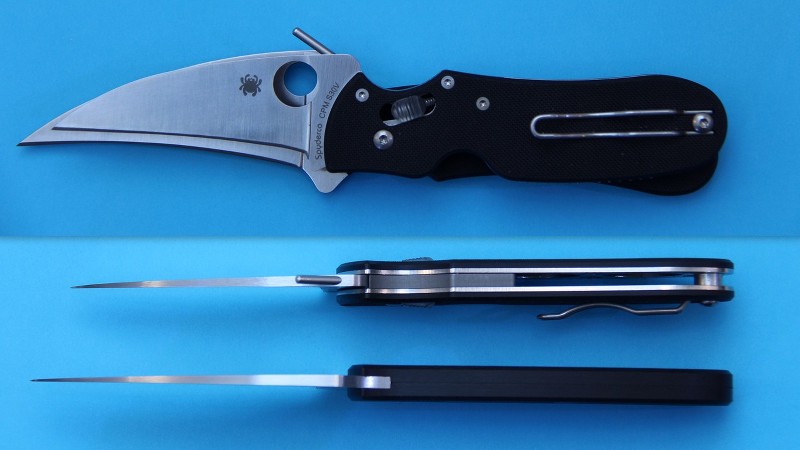 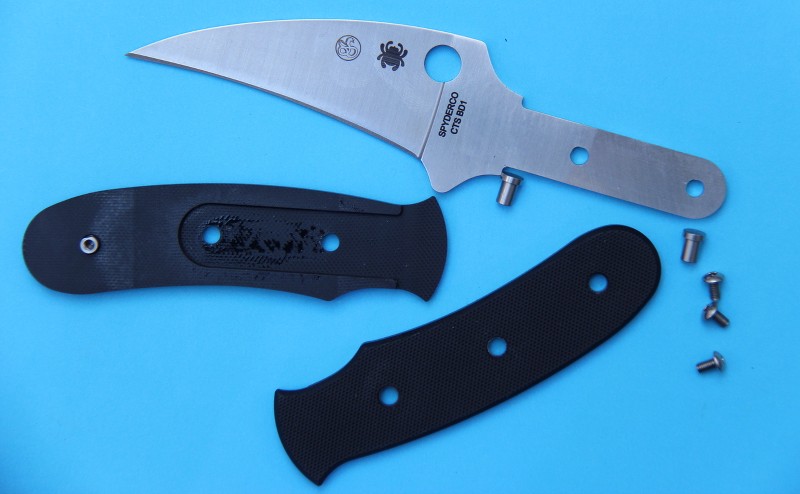 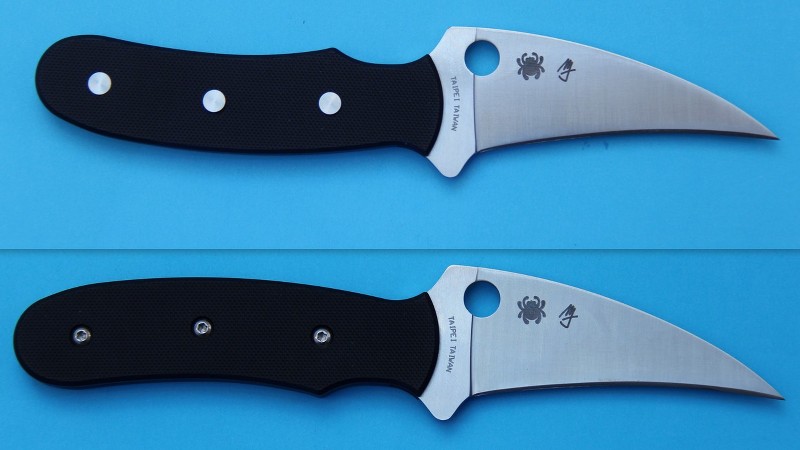