A place for you to post your pictures of Spyderco knives. Read Announcement before posting!
Forum rules
Post Reply
5155 posts

I Still Love Spyderco Beyond All Others, But I Felt The Need To Touch My Toe Into The Pool Of Custums.

Get ready to open the wallet WIDE!
Top

I have another few Spydie purchases on the way. Pictures once they arrive will be posted.
Top

Man i want a Cent 4.
It is kind of funny but it is almost a grail to me.
Nice score Evil
Top

I handled one on several occasions and i don't know why it took me so long to buy it. I think it was because the blade is so thin and i like a thicker blade. Still i can appreciate the overall thin and light weight package it makes for. It's the kind of knife that exudes class. This knife really deserved the carbon fiber treatment....that would've made for one seriously sexy knife.
SHARPEN IT LIKE YOU LOVE IT, USE IT LIKE YOU HATE IT
~David
Top

This is the last one I got.

I just went to the mail box and this was in it.
Dragonfly SE aus-8 NIB 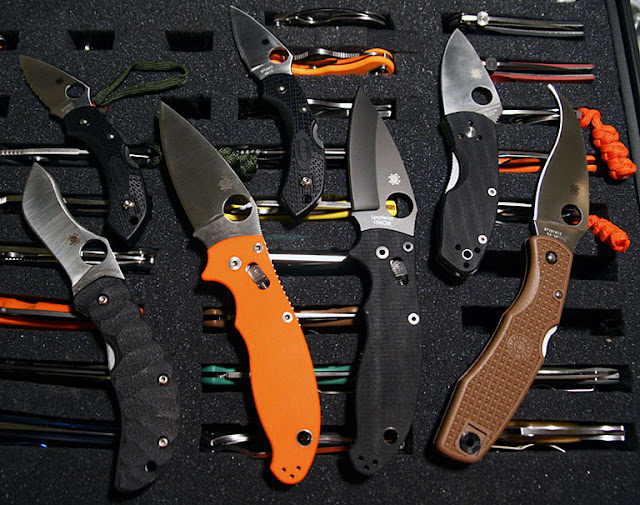 I wish Sal and Rick would do a colaboration. An XM with a Spyder hole would be the ticket...

Beautiful knife! Of course I'll give a big disclaimer before saying this... I've got about 50 Spyderco's and I LOVE the company. My last two purchases were a Manix2 and I've got a pre-ordered Para2 on the way (finally!).

Having said all thatI'd hope that I'm on solid enough ground to say that that knife doesn't need any holes in it! LOL! Just magnificent.

That having been said, a Sal and Rick collaboration would certainly be welcome!
Top

How do you like that mouse lite? When I got mine it had a corner on the action that made it funny to operate and also there was almost a 1mm gap of movement between the blade and the lock before it engaged. I tried open it to fix it and the first time I tightened the pivot, it stripped. Now I have an inexpensive/useless knife.

I emailed the company and never got a response.
-Brian
A distinguished lurker.
Waiting on a Squeak, Pingo, and Cliptools with a Split Spring!
Top

My newest additions. Caly 3.5, another Stretch, Ambitious and a Spin.

Donut wrote:How do you like that mouse lite? When I got mine it had a corner on the action that made it funny to operate and also there was almost a 1mm gap of movement between the blade and the lock before it engaged. I tried open it to fix it and the first time I tightened the pivot, it stripped. Now I have an inexpensive/useless knife.

I emailed the company and never got a response.

I have to say I share your thoughts exactly.. Ended getting it as a "side order" to something else, liked the looks of it. And the looks are OK, and the orange colour, I'm an orange freak

The sad truth is that you get what you pay for - which is not that much in this case. It's just not pleasant to use... The mechanics of it have not been thought of to the last detail.
Maybe some of the sites that sell folder kits and parts would have something you could repair it with?

Although no picture proof this time I could add that an in-promptu visit to the local knife shop ended up with a White Delica4 CE and a White Ladybug SE in my pocket.. Was not going to actually get anything this time but when I saw he still had those I could not resist - I believe I took the last ones... Also, it was nice to support the local business for a change.

one and two are quite similar but the 3rd got a different overall shape. if you align all three the spyderhole of the blue one is off set...
I ♥ blade, kite, motorcycle and _ _ X!
Top 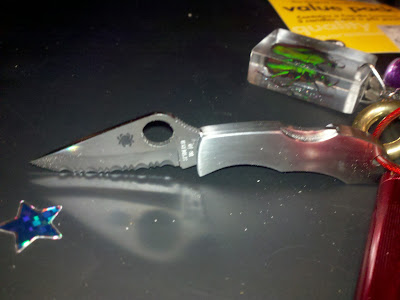 Ladybug Stainless, straight to the keychain for some hard use.
and this great tool! 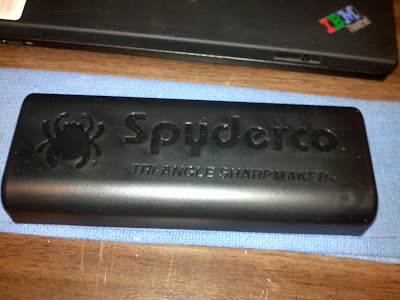 I got another Swick2 with a nice sheath from a fellow forum member.
Now i just need to figure out how to put on some nice scales.

I cant Wait for my EDC GITD Manix 2, hopefully this week. if not at least I know he cashed my check and it should be soon.
Top

It's been a good week!

First, picked up a Lava and Persistance from the Knife-BST forum;

And then added a Dragonfly Tattoo, Ambitious, and purple Ladybug from CS;

The Ladybug is for my wife, so she'll give me my black one back . . . but it already bit her, so now she's not sure she wants it anymore!

I also got an Atwood Prybaby, so I won't be tempted to open any bottles with my