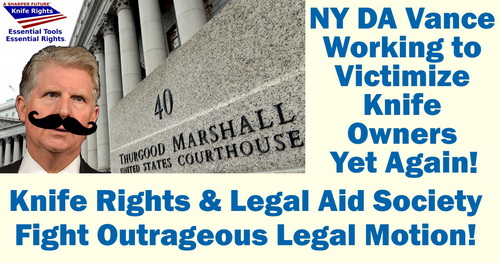 New York District Attorney Cyrus Vance, Jr., is up to his old tricks again, still trying to victimize law abiding knife owners. The contemptible DA is attempting to vacate the Federal District Court decision that ruled the “wrist flick test,” used by NYPD and prosecutors to determine if a knife is a gravity knife, was unconstitutional under some circumstances. His outrageous motion is a blatantly self-serving and highly inappropriate effort to abuse a foundational principle of jurisprudence to his benefit. Knife Rights and Legal Aid Society have filed an Amicus Curiae (Friend of the Court) brief opposing the DA’s motion.

As you may recall, prior to the Governor signing the law repealing the state’s gravity knife ban completely, a District Court Judge, who actually ruled on the merits and in accordance with the law, declared the wrist flick test unconstitutionally vague.That limited decision was cited by the Governor in his bill signing statement when it appeared that our case at the Supreme Court might be accepted, which he wanted to avoid at any cost. The DA, as was expected, appealed that loss to United States Court of Appeals for the Second Circuit. Now he wants to make that decision simply go away, like it never happened, potentially allowing NYPD and prosecutors to return to using the unconstitutionally vague test in the transit system where gravity knives are still illegal.

The DA is arguing that the Plaintiff no longer has any legal claim because the statewide gravity knife ban was repealed. But, he ignores the fact that gravity knives remain banned on subways and buses in NYC and that the NYPD has made it clear they intend to enforce that ban.

Worse, he wants the Appeals Court to vacate the original decision, claiming that since the case is now moot, they do not have the opportunity to appeal that decision. Except, in this case, they had a choice to continue the appeal and instead the DA himself chose to make a motion to have the appeal dismissed as moot. That is a brazen attempt to manipulate the system unfairly to vacate the case. They would automatically win the appeal without having to actually win the appeal. In essence, the DA is the proverbial child who murders his parents and then throws himself on the mercy of the court because he is an orphan.

The DA, having made the motion and having argued in favor of mootness, should be precluded from benefiting from its position by also having the decision vacated, regardless of the Appeals Court decision, for or against, on the mootness motion.

Just 4 days remaining to support Knife Rights’ efforts to Forge a Sharper Future™ with a donation in the Ultimate Steel™ Spectacular and get a chance to WIN from OVER $167,000 in Custom Knives, Guns & More! OVER $27,000 of TAIL END BONUS Prizes Received at BLADE Show have been added! DONATE NOW or DONATE AGAIN to get your chance at these Tail End Bonus prizes and DOUBLE YOUR CHANCES OF WINNING! www.UltimateSteel.org
Doug Ritter
www.KnifeRights.org
www.Equipped.org
www.DougRitter.com
Top
Post Reply
1 post • Page 1 of 1