If your topic has nothing to do with Spyderco, you can post it here.
Forum rules
Post Reply
50 posts

FWIW, I'm fairly certain that the original idea behind tactical pens was for them to be used as compliance tools, not deadly weapons.
Paul
My Personal Website ---- Beginners Guide to Spyderco Collecting ---- Spydiewiki
Deplorable

I Pray Heaven to Bestow The Best of Blessing on THIS HOUSE, and on ALL that shall hereafter Inhabit it. May none but Honest and Wise Men ever rule under This Roof! (John Adams regarding the White House)

As a pen & ink draughtsman, I spent many a happy hour with these! Especially the 0.3 - hideous to write with but essential for drawing on film.
Top

Oof, 0.3 would be rough! We had to use rapidographs on vellum in undergrad geology. Easy to tear!

I was an undergraduate in the late 80’s; when the Mac first appeared the drawing tool was a revelation. The future was immediately clear: the only question for companies was only really *when* they were going to adopt CAD - and how far they wanted to be behind their competitors before they did.
Top

There is a martial arts company known as US Tactical that has what looks exactly like a ball point pen but an Ice pick type spike comes out of the end of it. I"m seriously thinking about getting one of them. Heck that would fool even most police. Not sure of the legality of it but if it comes to someone jumping me and/or killing me I will take my chance on a jury trial.

I've seen other tactical type weapons disguised as ink pens in the past. But that one by US Tactical looks like a really nice piece.
Top

JD Spydo wrote: ↑
Mon Jul 01, 2019 10:49 am
There is a martial arts company known as US Tactical that has what looks exactly like a ball point pen but an Ice pick type spike comes out of the end of it. I"m seriously thinking about getting one of them. Heck that would fool even most police. Not sure of the legality of it but if it comes to someone jumping me and/or killing me I will take my chance on a jury trial.

I've seen other tactical type weapons disguised as ink pens in the past. But that one by US Tactical looks like a really nice piece.

Do you have a link to the "pen" or whatever it is.

Picked up one of these. More discreet than most tactical pens. It's a tuff writer. I like the fact that it doesn't draw much attention but I also like the heft when writing. It's not overly large or anything but it's definitely overbuilt. Solid copper with a fisher space pen inside. Nice click mechanism too. 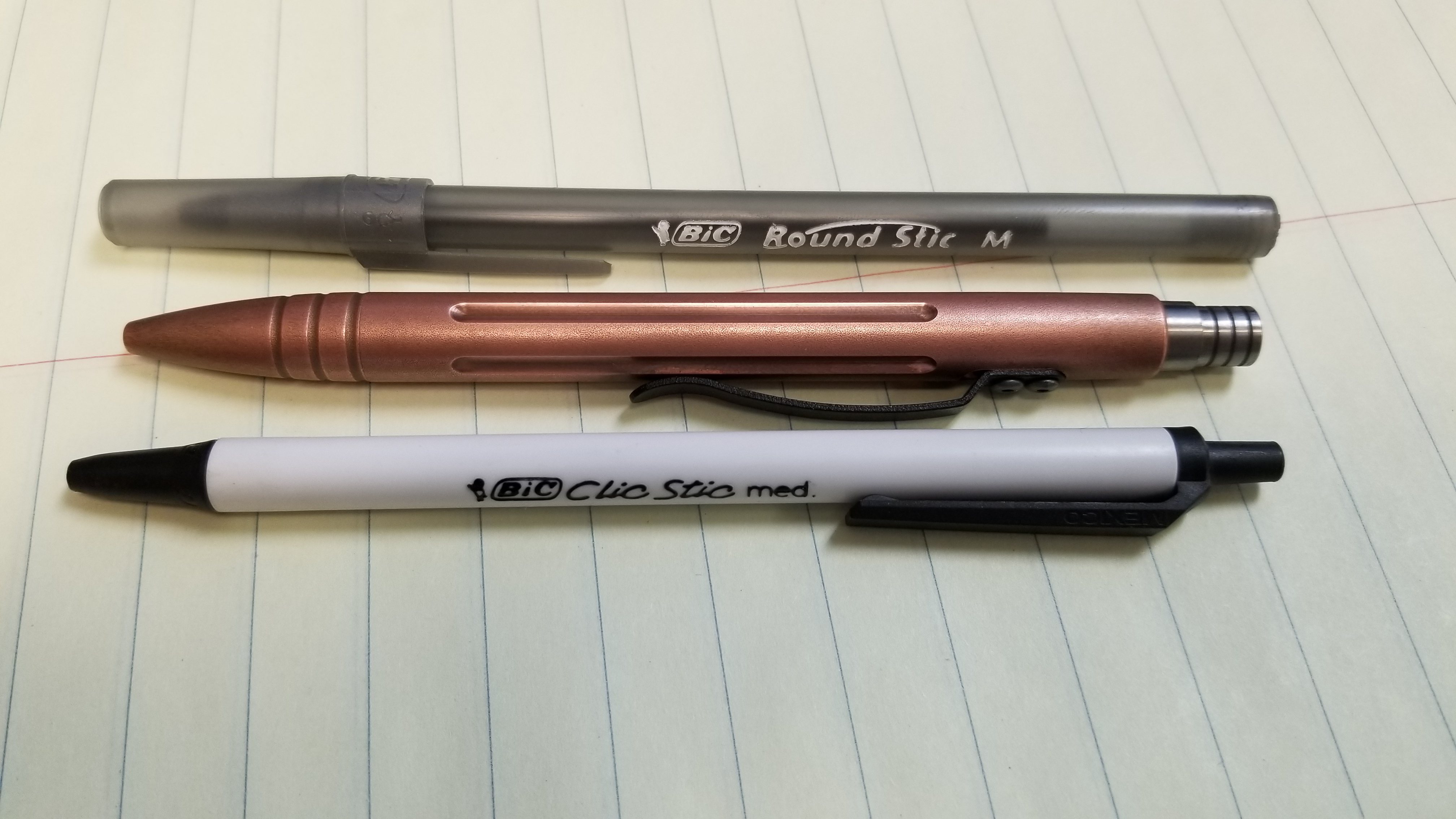 I like clickies, but I wonder how easy/hard to hold. Is the texture adequate? My favorite daily writer is a blue 0.7 pilot G2

They make one with actual finger grooves and a mini with o rings but no grooves. It works really well for writing. I can grip it pretty well for other uses too. Like breaking ice and stuff. You can always cap it with your thumb too. Sure it'll click the pen out but does that really matter in an emergency situation? They offer replacements for the mechanism if it breaks.

You can fit multiple refills in them because it has a adjustable block inside the pen. I used to use G2s all the time but I work in a dusty environment and it gets in the roller ball. Stops em pretty quick. 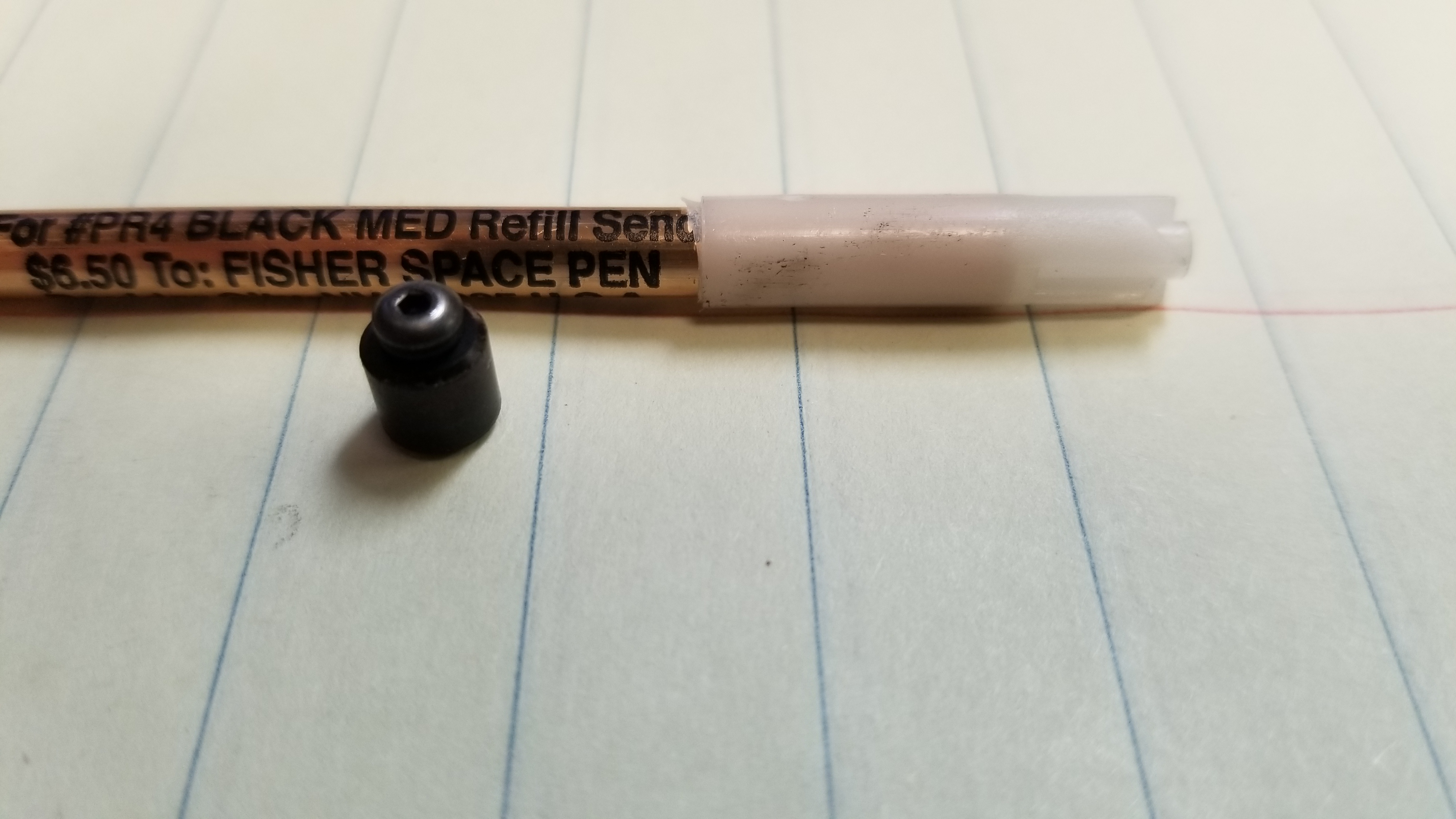 I've tactical pens and found a couple I like but they all take space pen refills. Do you all know of any that take a bit smoother cartridge? Under $100?

I just like how they don't feel cheap.
I own an assisted knife and am embarrassed to admit I enjoy it.
Top

SpyderEdgeForever wrote: ↑
Fri Jun 21, 2019 7:44 pm
Sometime ago there was a discussion on the forum about tactical pens. There are many such pens available, in assorted price ranges, and quality levels, made by different companies, everyone from Smith and Wesson, to Maxam, and Benchmade.

However, some commenters have said that there are several drawbacks to these specific Tactical Pens:

It has been suggested that a person purchase and carry a "normal but strongly built pen" such as this:

The Zebra Pen like others is made of stainless steel, the barrel is stainless steel, and it is very durable. There are other models and companies, too. Something can be "tactical" without being tactical. If the self-defender knows what they are doing, it is said these durable metal pens can be as effective as the specific "tactical pens" if not more so.

Is this true and are there any drawbacks or downsides to using and carrying one of these durable "normal pens"?

Next: Is the Spyderco Baliyo a tactical pen? Could it stand up to such use if needed?

I don't believe the baliyo was meant for anything but as a toy. For serious situations you, imo, should look for pens that CAN double as a self defense tool or a self defense tool that can realistically pass as a pen. Tuff writer or similar can pass as a pen and zebra pens can pass as a self defense tool. Choose wisely. I'm currently using a nextool tactical pen and I've not gotten one odd look when i use it and it's about $25. I don't doubt that it can and will do what it's supposed to in a self defense situation though there are some flaws. I can't blame spyderco for not wanting to get into this market. There are a lot of people that have no idea what they really want, let alone need. Mike Janich would be a great resource in this but he's already fully behind tuff-writer leaving spyderco no room to move. Even if spyderco did move into this territory they'd be way outmatched and outnumbered in several ways.

I do love the idea of a good tactical pen, though.
Top

Pentel mechanical pencils are quite stabby, though I couldn’t say how they’d handle lateral torque. 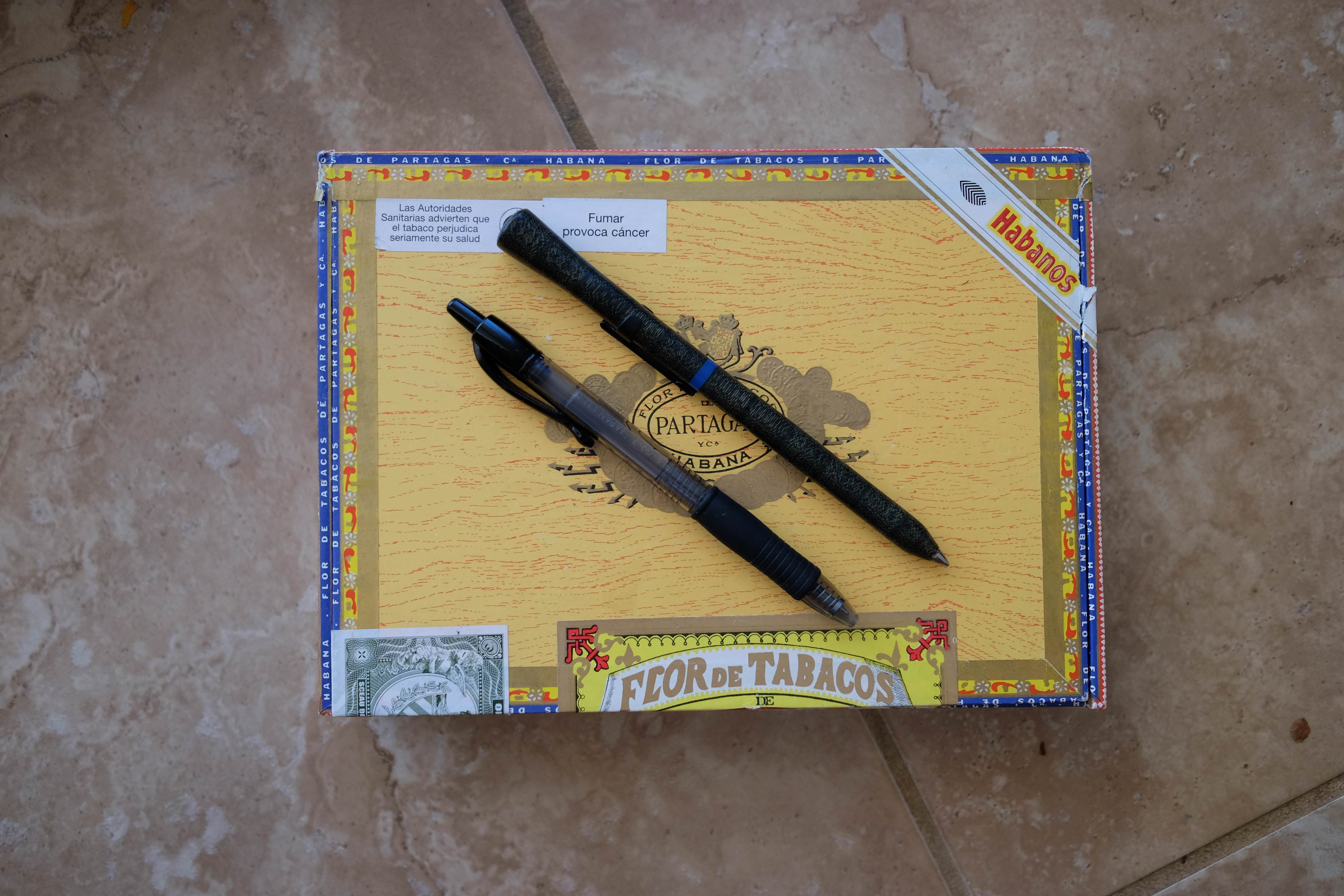 I carry a Gerber Impromptu everyday

Can always have a nice pen for when signing papers or documents on errands or simply taking notes in a pocket journal.
Last edited by stream26 on Sun Oct 20, 2019 11:36 pm, edited 1 time in total.
Top

Do you have one of the new F-701's? I've done the 701-402 hack on previous models but the new 701's do not have the plastic piece at the top. They claim to be all metal "from tip to clip". I bought one today and it was under $6, which I think is a bargain. The only thing I don't like is that I can only find them with black ink and my job requires that I use blue ink. I usually swap the ink cartridges for Zebra fine tip blue cartridges that seem to work well. Do you think the Fisher Cartridges are worth the extra money?

BTW, I'd recommend the F-701 to anyone that wants a pen that writes great and carries easily, and could be used for self defense if you absolutely needed to do so.

I would not recommend a Bali-Yo for self defense because they are not built strong enough to withstand that kind of punishment.

I have the new "all metal" version but it's BS, it all screws together into a plastic tube underneath a stainless tube on the outside of the body. I like the Fisher cartridges because I write in all climates so rain/snow/heat/cold and sometimes on random surfaces other than paper. It does take some mods to get the cartridge to work though.

I did a little write up here. If you aren't familiar with doing the mod you may need to read up on it, I didn't go into great detail about the basics, only about some of the issues I've had and how I corrected them.

Excellent mod thanks, I'm going to try this.
Top

Lots of the metal pens that drug reps used give to us physicians back in the day make for nice discreet tactical pens. Especially the ones that twist deploy rather than with a push button. Google "Drug rep pens".

I like the new version of the Urban Survival Gear Ti Scribe Bolt too. Takes both the popular gel refills or Parker refills with an adapter. The pocket clip is the bolt so no button on top.

The Retro 51 Tornado is a sturdy pen as well but IMO a tad short for tactical (stabbing) duty. 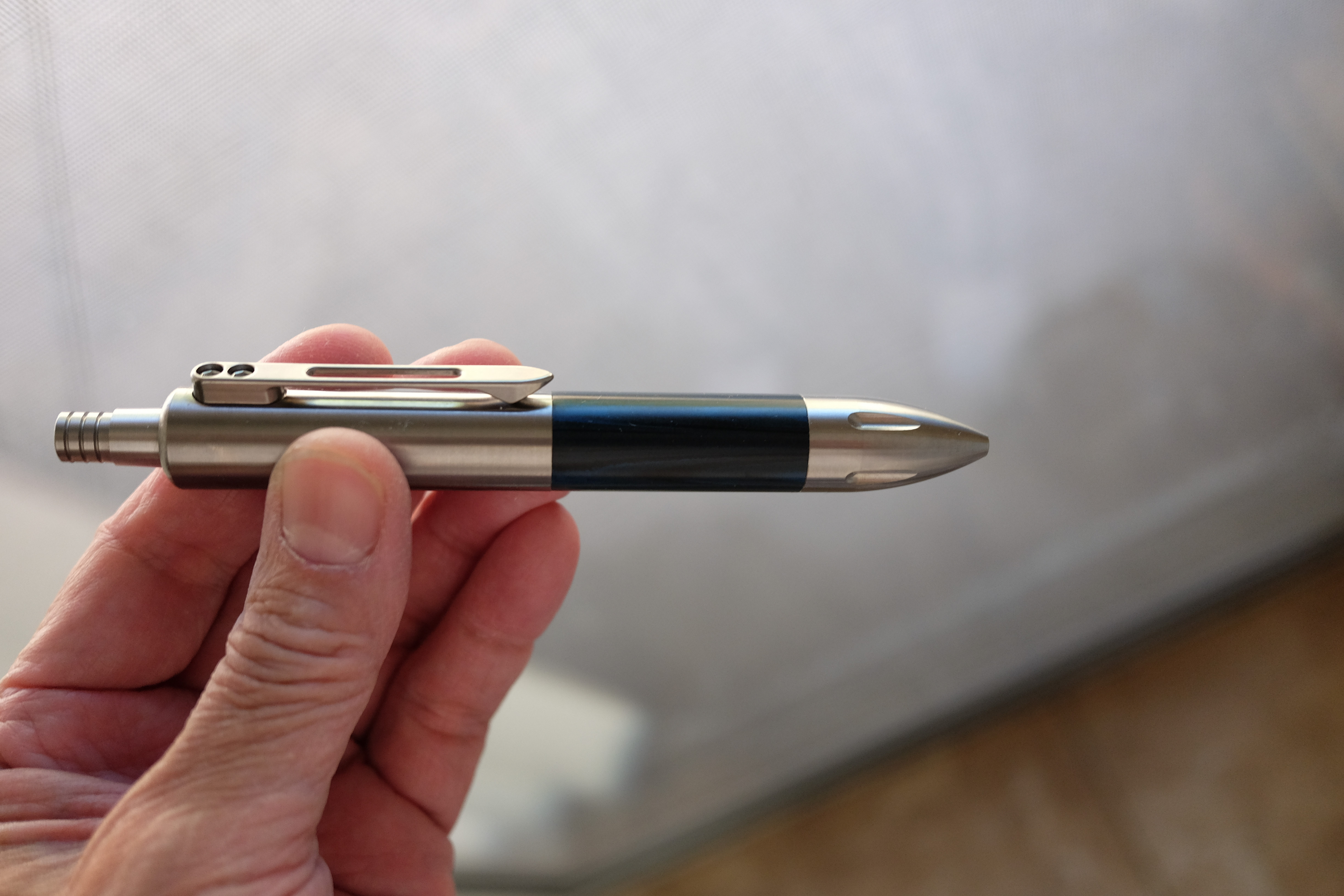