If your topic has nothing to do with Spyderco, you can post it here.
Forum rules
Post Reply
37 posts

I've been wanting to purchase a tactical pen for some time, so today I did! I purchased a S&W Military and Police Tactical Pen, in black. The reason why I did not buy one sooner is because I always have at least two knives on me. Oh, I also have a BOOM stick on me too, along with an illuminating device with mega lumen output.

The reason why I finally bought it is because I'll be flying next week. I really did not dig the thought of flying with only a mini maglite on my person. So, I ordered the pen and two Cold Steel Sharkies, one black and the other white. I'll only bring one Sharkie with me, but I bought two because they were different colors.

I bet when Doc flies the airport magnetometers go off as soon as he pulls into the parking lot.

Seriously though, I have an Smith & Wesson 'tactical' pen, and I must say I like it a lot.
Top

Dr.Snubnose gifted me a blue one a few days ago, he insisted I hve one. really do like it. Im going to buy it a parker refill

spyderkoholic wrote: Oh, I also have a BOOM stick on me too, along with an illuminating device with mega lumen output.

You carry a shotgun?

TSA will not you let on the plane with a Tactical Pen...Don't try to take it on the plane it will be taken from you.... Get a good steel body pen that does not look tactical. The S&W Tactical Pen is on their list of no no's. Take the Mini-Mag-lite, Take a pair of Scissors (no more than 4" blade length), Take a pair of knitting needles and some yarn...wear a pair of heavy boots, put your belt with the biggest pointed sharpest edged belt buckle you have on , Take a roll of quarters with you so you can make a make shift sap from the flight magazine in the seat pocket in front of you on the plane but leave the S&W Tactical Pen and Sharkie at home.... Doc

AAAGGGHHHHH!! I should've known better then to think I could've brought those items on the plane with me. Thanks Doc for the heads up. I do have a steel body pen that I've had for about 14 years now. I guess that is one of the items I'll have with me.

It's funny too because I do have a pair of steel toe boots that I was planning on wearing. I will also take a trip to my local clothing store to purchase a belt with a nice buckle on it. Oh well, at least I have new EDC items to play with at another date.

Evil Dead fan, oh yeah! Nah it's not a shotgun, it's whatever handgun I have on me, which is normally my G22. I just love calling my handgun BOOM Sticks! Only an Evil Dead will know what I'm talking about.

I have a 45-70 crack barrel that I call my boom stick. Still working on a sawed off 12ga. I thought about pistol gripping the 45-70 just didn't get around to doing it yet.
Top

I own a S&W pen that I keep in my bag. I like it, does not get used much but it is nice.

I went ahead and ordered one of these. 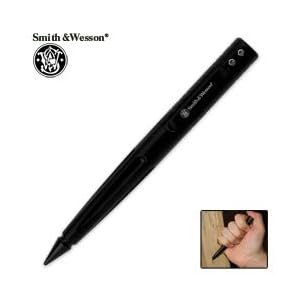 I like the idea of a screw on cap and it will be great for field work in that regard. Also will keep dirt out and I can put a Parker refill in that I will prefer. Dont really care for the "tactical" aspect and will probably remove the S&W logo.
"If you wish to live and thrive, let the spider run alive"
"the perfect knife is the one in your hand, you should just learn how to use it."
If you don't have anything good to say, then don't say anything at all

VashHash wrote:I have a 45-70 crack barrel that I call my boom stick. Still working on a sawed off 12ga. I thought about pistol gripping the 45-70 just didn't get around to doing it yet.

LOL....I don't call it my boom stick....I call it my "Walnut Howitzer" I have a derringer made by American Derringer corp. in 45-70....Talk about recoil lol...The top barrel is plugged with steel to keep the recoil down...haha...so there really is only one shot...the 45-70 rounds goes the entire length of the barrel and almost looks likes it's sticking out...Walnut is to describe what it feels like you are holding in your hand for a grip.....LOL...If it hits its target...well that target is destroyed, so you don't need more that one round anyway...if you miss and you are at contact range...the muzzle blast and flash will knock out your opponent unconscious on the spot.....LOL.....either way it's a good thing......Doc

Will they let you on with metal pens? I've got one with a level built in, twist style pen. I'd like to take it but I don't know if they'll take it off me.

Doc love that Derringer!
Welcome to our newest member, Half Sack

Half Sack wrote:Will they let you on with metal pens? I've got one with a level built in, twist style pen. I'd like to take it but I don't know if they'll take it off me.

Nyce! Watch out tsa.
Welcome to our newest member, Half Sack

Yea I would check it. People have caught MAJOR heat (and fines) for those. Funny because a 20 cent Bic will go right in someone too.

Doc I do not think I will ever shoot a 45-70 Derringer, your hand looks like it was dipped in acid!

Blerv if I need to check it I'll just leave it and bring other pens its not an essential item like my knives, just curious as to what others thought. I assume they'd take it though since its all metal.
Doc OMG! I hope this is one those, "yeah but you should see the other guy" deals, looks like you feel off a bike or something.
Welcome to our newest member, Half Sack

I have traveled on planes with metal pens in my briefcase. No one looked twice. I would advise against the CS Sharkie as well. It is advertised as a weapon so TSA can confiscate it. Sharpie makes a large size (5.5" long 0.75 wide) marker that will fill your hand and work as a make shift kubaton. It's manufactured and sold as a marker so you shouldn't have any problems. Besides, if they take it at the airport, find a Staples or Office Depot and buy another for about $2.
A civilization is built on what is required of men, not on that which is provided for them. Antoine de Saint-Exupéry
Top

Doc, that CAN'T be your hand! Holy smokes!

As for the pen, I own a S&W pen myself! It most certainly makes a good conversation starter at my store and it really does sell itself. People sign their receipts with it and naturally ask where they can buy the same exact pen. For $20 you can't go wrong. You can find tactical fountain pens now

Gotta get one soon.
Instragram
Top

Will they (TSA) confiscate a Spyderco Bali-Yo