If your topic has nothing to do with Spyderco, you can post it here.
Forum rules
Post Reply
14 posts • Page 1 of 1

I have no experience with the cardini holsters, but I am interested in any thoughts you have on that Hellcat.

I cannot abide an IWB holster but I have been very pleased
with the new OWB Lock Leather pancake holsters sold by Urban Carry.
https://urbancarryholsters.com/order-ne ... lster.html

Modestly priced at $59, the sturdy holster for my Kel-Tec PF9
was so impressive I bought another for my Springfield XDs.

Instead of using molds for hundreds of pistols
crafting them one at a time, they have 25 different sizes
in inventory allowing for prompt delivery.

The leather was snug fitting and well sewn.
An adjustable internal Kydex trigger guard lock
keeps the shootin' iron in until you slap leather and fine tunes the draw.
They have a 15 degree cant and are available in brown or black.

TomAiello wrote: ↑
Tue May 04, 2021 8:19 am
I have no experience with the cardini holsters, but I am interested in any thoughts you have on that Hellcat.

i originally bought a p365 2 months ago but could not shoot it worth a ****. so i bought the hellcat. it was like night and day difference. love my hellcat very accurate, recoil is on par with a shield and g43. i currently carry a kimber evo and wanted more capacity for when i go places i dont normally go. i do have a reckoning holster from crossbreed coming for aiwb or if i can get it canted enough even 4 o clock iwb like my mini tuck for the kimber.

No experience with that brand, but Alien Gear makes several IWB holsters with adjustable cant for the Hellcat. I've been using one of their Cloak Tuck IWB's for my Langdon Elite Centurion for the past couple months and find it very comfortable.
Paul
My Personal Website ---- Beginners Guide to Spyderco Collecting ---- Spydiewiki
Deplorable

Stealth Gear for everything I carry.
How you carry yourself is just as important as what you carry.
~David
Top

Must be nice to have lots of options... My stoeger has only a few! Lol currently use a clinger gear iwb with the cushion... Works great. Have an aliengear cloak tuck as well, and it works but I don't like not being able to reholster, and my cloak mod owb is a winter only holster so I can cover it up with other clothing.

My thoughts on IWB vs OWB. With IWB, the grip has to be covered with something, typically a loose fitting top shirt. If a cover shirt is to be worn, might as well have an OWB rig. And the pancake does stay close to the body, but so much more comfortable, especially in hot, humid weather. Anyhow, here in Texas now that we have open carry and may soon have constitutional carry, it does not matter so much if the shirt tail gaps open and gives someone a peak.

Also, with an OWB pancake, the holster belt slots are five or six inches apart. Depending on the belt loops on your trousers, the holster can easily be slid back and forth between the 3 o'clock and 4 o'clock. 4 o'clock is more natural and comfortable, but in a store for example, I like it in 3 o'clock to reduce printing when I'm reaching for the broccoli.

From a fashion standpoint, in my opinion a pancake holster is ugly. Given my druthers, I would rather have something like an Askins Avenger named for Colonel Charles Askins, Jr., a gunfighting legend. The same 15 degree FBI cant is available and it is almost as stable because of the second trailing belt slot. Versions of the design are crafted by most major holster manufacturers, however it will not ride as close to the body as a pancake and the short distance between holster belt slots limits choice of position and may require skipping a trouser belt loop. It is, however, easier to reholster because it tends to stand open due to the lack of belt tension compared to a pancake.

In holsters, as in life, there are many compromises.
That is why most of us have a cardboard box full of holsters.

I carry my XDS 4.0 in an Alien Gear IWB rig. I've tried others but keep going back to the Alien Gear.
Of all the things I've lost I miss my mind the most!
Top

Mad Mac wrote: ↑
Mon May 10, 2021 7:10 am
My thoughts on IWB vs OWB. With IWB, the grip has to be covered with something, typically a loose fitting top shirt. If a cover shirt is to be worn, might as well have an OWB rig.


Yes, no, and maybe. In most states that require concealed carry an IWB holster only needs to keep the portion of the gun that protrudes above the top of your pants covered. An OWB hoslter, on the other hand, must be kept completely covered.

Granted, it will depend to some degree on the gun's barrel length and the holster's ride height and cant, and to some degree on the way your state defines "concealed". While there may be one or more states where the definition of "concealed" allows having something visible on one's person that hides the firearm itself from view but is so obviously the holster for a firearm that it could not be interpreted by any reasonable person to be something else, I suspect most do not.
Paul
My Personal Website ---- Beginners Guide to Spyderco Collecting ---- Spydiewiki
Deplorable

You are absolutely correct, Sir.
But for vertically challenged people, such as myself,
almost any shirt is long enough to cover the holster
unless I raise my right arm, which I try to avoid doing.

i always carry iwb or apendix iwb. do not own any owb and never will. i may get a leg drop holster but not for conceal carry. carrying owb without a long cover garment just doenst work. i carry my gun if a manner to which no one ever knows i have a gun, no printing no showing no bulges, ever. you cant take my gun and shoot me if you absolutely do not know its there or find me threatening.

I carry at about 315, canted. The grip perfectly molds into my love handle (lol!) and the rest of my piece nestles between my hip bone and the concave portion of the side of my glutteus. It works for me! No one knows and I like it that way.

Went to the grocery store one night with the wife and a guy had his s&w sd9 just hanging out for all to see. I respect he wants to open carry, but he's a target. Me, nope... Nothing to see here.

We're constitutional here in Mississippi. Open or concealed. I carry because it's my right, and I have a family to protect. Nothing much happens where I live, but I always stay aware. Still need to get my ccw so I can carry in other states as well. Working away from home a lot and I take my pistol anyway, better safe than sorry.
Spyderco : Resilience, Tenacious, Persistence, Manix 2 G10, Para 3 G10, Para 3 LW, Paramilitary 2,
BBS Paramilitary 2, Amalgam, Native Chief, Blade HQ Manix 2 XL, S30V Shaman, Gayle Bradley 2, DLC M4 Shaman, Magnitude, Z Wear Shaman, DLC S30V Shaman
Top

The topic has already veered far from the question in the original post,
but I must make a pitch for my most concealable pistol.
A .32 Seecamp in a Bear Creek convertible holster.
The only rig I've been able to carry all day every day for a week at a time. 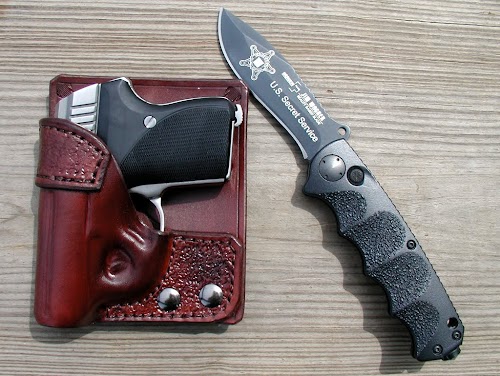 The knife was a gift from my Special Agent son-in-law.