Has anyone noticed the quality of Golden made knives go downhill lately? I recently picked up a Rex 45 Native 5 LW and I am really not impressed with this:

My new St Nick's exclusive is much better, but stacked up against an older S35VN version I noticed a small difference. Can you see it?

Don't get me started on grind lines on the Shaman...

My Taichung knives are starting to outnumber my Goldens. And I never thought I would say this but the budget Chinese made versions are becoming more aesthetically pleasing!

Haven't noticed any issues from any of the Golden models I've received lately. I also don't look at my knives with a magnifying glass like some do either.

FWIW, my REX45 N5 LW and both of my St Nicks N5s don't look like yours

Also, the jimping in your St Nick's N5 looks much better to me than the S35VN model on the left
Of all the things I've lost I miss my mind the most!
Top

I'm not sure specifically what you're looking at here but keep in mind how very very small your sample size is.

I tend to have more Taichung models but I think that's more just random than any actual preference (unless you count multiples of the same models, in that case I definitely have more Golden models).
SHARPEN IT LIKE YOU LOVE IT, USE IT LIKE YOU HATE IT
~David
Top

Ive been picking up more Golden models than anything else lately.

Are you complaining that the lockbar jimping is at a different angle than the blade spine jimping? Every single native 5 I have seen or handled does that. I dont know why, but it doesnt effect anything either.

Whats wrong with the grind lines of the shaman?

Sharp Guy wrote: ↑
Mon Aug 31, 2020 5:08 pm
Haven't noticed any issues from any of the Golden models I've received lately. I also don't look at my knives with a magnifying glass like some do either.

FWIW, my REX45 N5 LW and both of my St Nicks N5s don't look like yours

Also, the jimping in your St Nick's N5 looks much better to me than the S35VN model on the left

How are your St Nick's knives different?

The jimping on my S35VN knife has a very slight bevel on the edges. It was hard to get a good picture of it but it was just a small detail I noticed.
Top

VooDooChild wrote: ↑
Mon Aug 31, 2020 5:21 pm
Ive been picking up more Golden models than anything else lately.

Are you complaining that the lockbar jimping is at a different angle than the blade spine jimping? Every single native 5 I have seen or handled does that. I dont know why, but it doesnt effect anything either.

Whats wrong with the grind lines of the shaman?

VooDooChild wrote: ↑
Mon Aug 31, 2020 5:21 pm
Are you complaining that the lockbar jimping is at a different angle than the blade spine jimping? Every single native 5 I have seen or handled does that. I dont know why, but it doesnt effect anything either.

After seeing the OP's pictures I decided to get a magnifying glass out. Only the 3 recent Natives I mentioned above are like that. The SNK G10 one I just received is pretty messed up. It looks like the tool they use to cut the jimping needs to be sharpened or changed out. The other 5 Native 5s I have are a little older and the jimping on the lock bar is square to the jimping on the blade on all of them.
Of all the things I've lost I miss my mind the most!
Top

I have noticed the uneven front side/backside edge bevel at the tip happen randomly on different spydercos I have bought. It is not limited to the Shaman. I dont know why it happens, or why it seems to be random.

I'll admit up front that I haven't bought a brand new, in the box GOLDEN CO made Spyderco knife since about 14 months ago due to several medical bills I've had.

But over the years I've had great quality to report on with all my purchases of Spyderco's USA, GOLDEN CO made knives. If the flaw you've found is really as bad as you report to us that it is then I highly encourage you to take it up with Spyderco's Warranty & Repair Dept. I've had nothing but great results with anything I've sent to them.

They are very reasonable and kind people and I'm totally confident you can get your problem resolved with them. Keep us posted and let us know how it works out for you.
Top

It looks like the lockbar jimping is out of alignment on OP's Rex Native. That wouldn't bother me too much if it were mine, but as long as that really is what I'm seeing, yes it does look slightly out of alignment with respect to the blade spine jimping. That said, one of my 52100 Millies has some very very minor imperfections in the jimping, and it doesn't bother me at all. Manufactured products have minor variations from piece to piece, and overall I've found Golden quality to be, well, golden. Also, Taichung is known for producing very high quality pieces.
My collection so far: 52100 Military (2); 52100 PM2 (2); 52100 Para3; Stretch2 V-Toku; KnifeWorks M4 PM2; BentoBox M390 PM2; BentoBox S90V Military; Police4 K390; S110V PM2; SS Delica AUS-6; Wayne Goddard Sprint VG-10
Wish list: Hundred Pacer; Sliverax; Mantra; 52100 PM2 SE; Kapara
Top


This. I've not noticed any decline in quality.
So many knives, so few pockets...

The only issues I can make out are the jimping being skewed on the Native and the Shaman's wonky bevel(which looks quite severe).

I've not had any quality issues. But, the last knife I bought from a retailer was the Watu and it was perfect.

I'm sure they will see this thread and rectify the issues.
Top

I purchased at least half a dozen Golden Spyderco models between 2017 to 2019, and haven’t had a flaw in any of them. I’m not saying flaws don’t happen; they do. I just haven’t gotten any.

When I order a knife, I always call the online dealer and order over the phone. And I have a pre-written list of things (things I want, as well as flaws) I ask them to check the knife for, before they ship it. I’ve never had any dealer who thought this was unreasonable to ask. Doing it this way makes a BIG difference, instead of pressing buttons and hoping for the best. And there are only three different online dealers I order from.

All my Golden knives have been top notch, and I’m obsessed with their detents! I wish Golden could double the size of the factory and clone the crew and make everything they can there!
Top

After the Cru-carta Shaman, every single one of the 5 Shamans I’ve had has had the show-side tip over-ground. It’s a flaw in the sharpening robot’s programming.

Here’s my best picture of it. It doesn’t look severe from this bad angle, but the edge bevel was 1.5-2 times as tall at the tip than the average along the rest of the edge, and the BTE was well over 0.030”. 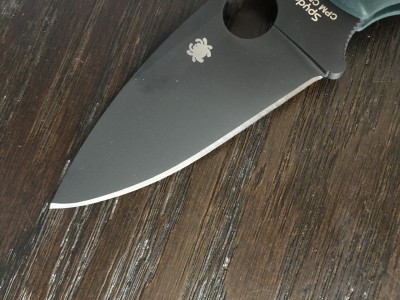 At least the post-Cru-carta Shamans, some early backlock Lil’Natives, and St. Nick’s Lil’Natives we’re afflicted by this specific grind flaw.

Other models (Military, PM2, Manix) each have other recurring grind inconsistencies unique to them.

Most of my Manixes have also been ground unnecessarily thick BTE in the recent past.

My native's jimping is just as, if not more uneven. However, it's the only problem with the knife. Spectacular action, spectacular grind, spectacular handle. Plus the uneven jimping doesn't effect function whatsoever. I consider most golden and seki models, if not all golden and seki models, to be working knives (especially the ones under 150), so minor cosmetic stuff doesn't bother me.

Also I don't really consider uneven bevels to be any sort of a defect, since it's so easily fixed.
I require more lc200n and thinner grinds

First of all, sorry to everyone for continuing this tangent...

Abyss__Fish wrote: ↑ Also I don't really consider uneven bevels to be any sort of a defect, since it's so easily fixed.

Abyss_Fish, please don’t mistake this as an offensive response. I’m just compelled to better explain my experience and meaning.

Unevenness on a thinly-ground blade is indeed tolerable and fixable, but a Shaman blade is rarely, if ever, thinly ground.

The problem with over-ground edge bevels is that you can never fix them to be less over-ground, barring an expensive professional regrind. It’s not just an aesthetic annoyance, because it leads to fat BTE numbers before any sharpening has even happened.

We all know that thin BTE is better for cutting performance. This is especially important on thick blades like the Shaman, on which the BTE thickens quickly as you grind away the edge during sharpening. My thinner-bladed and thinly-ground Endura and thinly-ground PM2, with plenty of sharpenings, are still thinner BTE than any new Shaman that I’ve had since the Cru-carta Shaman and several of my Manixes.

Funny enough, my REX 45 Manix has the same jimping patterns, a bit crooked and a wider on one side.
In the pocket: Chaparral FRN, Native Chief, Police 4 K390, Pacific Salt SE, Manix 2 G10 REX45
On belt: Waterway
Top