I was hoping the delay was for some CQI to move these to screws. Bummer. My wallet lives to fight another day.

When they come up in a google search, it always says in stock under availability on the search engine list. When you go to their webpage it says out of stock. Because of this Im not sure they have actually sold out.

I made a few calls over my cars bluetooth system, while traveling today. Once I had heard this model was trickling out to some Dealers. As far as I can tell at this moment (4:40-ish PM Central), only about 15 of these have been sold so far, in the past 1.5 days. So it's real early yet, and plenty are still available.
Top

It's a matter of luck/chance-
Dealers get a box of them, put them on the net and they start selling. People may not know exactly when they are going to be availabe so whoever happens to go to the website manages to find them. I wonder if this keeps some of them out of the hands of the scammers.
Top

Thanks Julia! Especially for the link. I had searched their site before a couple times for this model and wasn't able to find it.
Top

Thanks. I got one.
Think theyre gone now though.

I resisted... then they were gone.

Then I found more at Smokey Mountain.

One is now on the way.
Top

Then I found more at Smokey Mountain.

One is now on the way.

Thanks Julia! Especially for the link. I had searched their site before a couple times for this model and wasn't able to find it.

Excellent! They didn't have a page for it on their website until they were actually for sale. I just happened to run a search at the right time.
- Julia

So I got mine in today.

2. It has the little opening click which seems to be pretty random. It doesnt bother me but I know it bothers some.

3. The action is very tight. Definitely not as smooth as other manix lightweights I have.

4. I had to adjust the pivot screws. Even after readjustment, and getting them just right, the action is still tighter than my other manix lightweights.

5. The biggest thing, mine has lock stick. I havent had this with any other ball bearing lock.

Im going to carry it and open and close it a whole bunch to break it in. If the action smooths out and loosens up, and the lock stick goes away, then I will be happy. Hopefully it just needs breaking in.

Just got mine in the mail. I've purchased a handful of knives this year, but this is the one that I've really been waiting for. I've been eagerly waiting since it was revealed. I LIKE the Manix 2 knives. I LIKE the LW version. I LIKE REX 45. The only change I wanted was the deep carry clip, which is just to satisfy my curiosity.

Under the scope, the edge looks very consistent, even at both ends. Like VooDoo said, the blade was a little tight in the pivot, and there's a slight bind when the blade is about 25 degrees from fully closed. A little lube and loosening made the tightness better. The blade will now fall with a little flick of the wrist. I expect that everything will break in nicely after a little use.

Every time I look at this thing, it really amuses me that a plastic-handled knife can work so nicely.

P.S.
I got down to the kitchen just in time to slice some super-thin onions to go on top the pizza. Fun times! 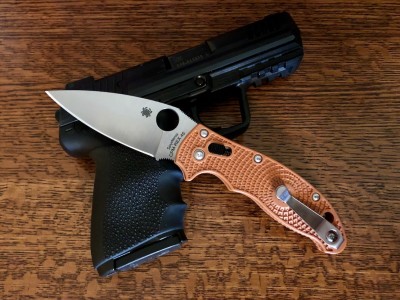 I ordered and received two. Both click and both are off center but neither enough to affect function. The edges are sharp but far from consistent. One will go into the work rotation the other may get moved along. If I hadn’t lost one of my G-10 models I would have passed on this LW altogether but I really like the Rex45 so I’ll take it and shut up now

I just got mine and it's the same. It will replace my old M4/G10 version as a work knife.
Top 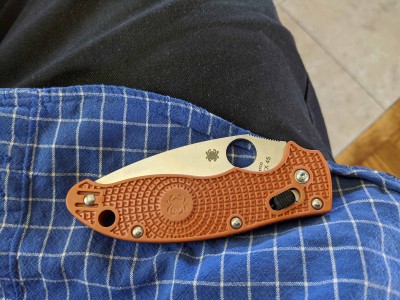