Difference in the wave?

Difference in the wave?

I've owned an Endura wave for a few years now. Loved its function, ease of opening and closing, the weight and how slim it fits in the pocket. I've found i didn't use it much for a work knife though and tended to lean towards a dragonfly for basic needs (I'm a manager in a warehouse, so usually i''m cutting tape or boxes).

With the state for the world, hoping never to use it, and finally noting that I'm not using that pocket space. I picked up a Spyderco Matriarch 2.

I'm seeing a difference in the wave feature though. The "hook" on my Endura seems to be much more smoothed out and rounded. While on the Matriarch it is more jagged and catching. This could be with the way the blade is designed. I know a saber grind and hook bill are totally different grinds, not even throwing the serrated side into it.

I've never had an issue with my Endura deploying though. Even by accident when i'm just emptying my pockets at the end of the day, sometimes it catches and pops open. Now, the more jagged design on the Matriarch isn't an issue by any means. I bought this knife with the sole purpose of only pulling it out when i need it. So knowing it's going to catch it really a big plus.

I am concerned about my pockets though. We're all flashy in our own regard. Sometimes it's just the clip a few people will notice, other times; It's that beautiful moment when a "knife person" shows you that gas station knife they bought for 4$ and claim it's better than yours because it has a "seat belt cutter". Despite being made out of a cheap steel, cheap handles, and is about as comfortable to grip as a fork pushed into an electrical outlet... I digress.

The main point is I have seen a difference in the wave feature. Is there a point in one being "more catchy" than the other? Neither have failed me.

Would love to hear others thoughts. 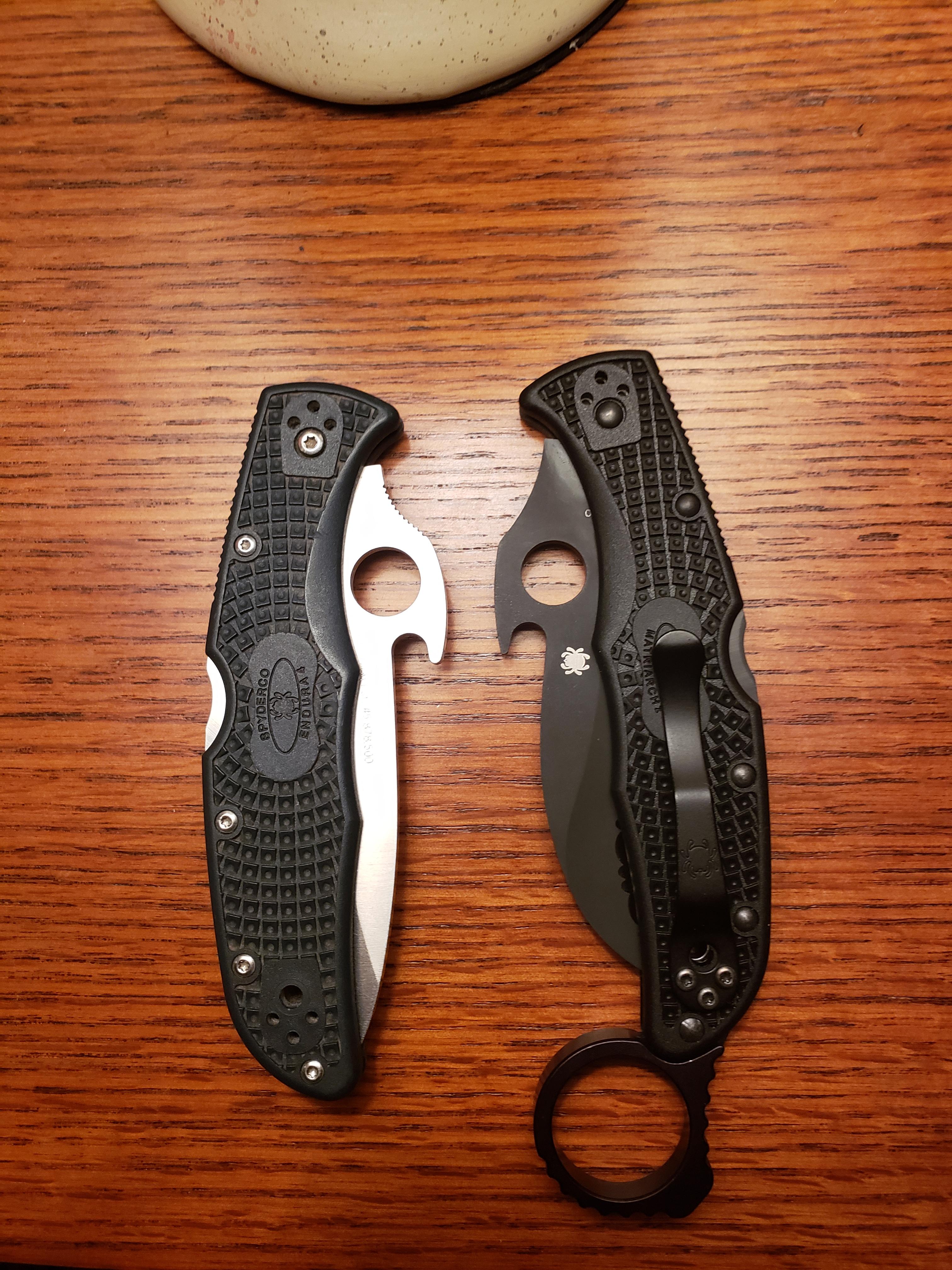 I used to collect a lot of knives... I still do, but i used to too.

I can´t help. sorry, but interesting to see...

Might be, as you implied anyway, that the Matriarch is meant to be more of a self defence tool, so tendentially it will be deployed not often, but IF, the knife absolutely HAS to open on the first try and pocket wear is not an concern in a life and death scenario?!
While the Endura is more of work knife, more often deployed, it does not have to be THAT reliable when it comes to opening each time on the first try, and pocket wear actually is an issue here?!
Top three going by pocket-time: Endura 4 in VG 10/Micarta-scales; Stretch 1 in VG 10; Endura 4 in HAP 40
Top

I was gonna say it's probably CQI, but the upcoming Para 2 with the wave seems to be somewhere between those two in how thin and sharp the hook is. Maybe it's just a model by model choice, maybe the Matriarch just had less blade profile to work with and ended up that way.
SHARPEN IT LIKE YOU LOVE IT, USE IT LIKE YOU HATE IT
~David
Top

This looks to me like a compromise between wave design and tip strength.

You'll notice that on the endurance, the line where they routed out/ground out the wave is pretty straight, see the green line below.

On the Matriarch, if they had done the same thing (red line), they would have had to remove a lot more material from the blade, compromising the strength of the blade towards the tip. Instead, they routed out a curved line (green line). 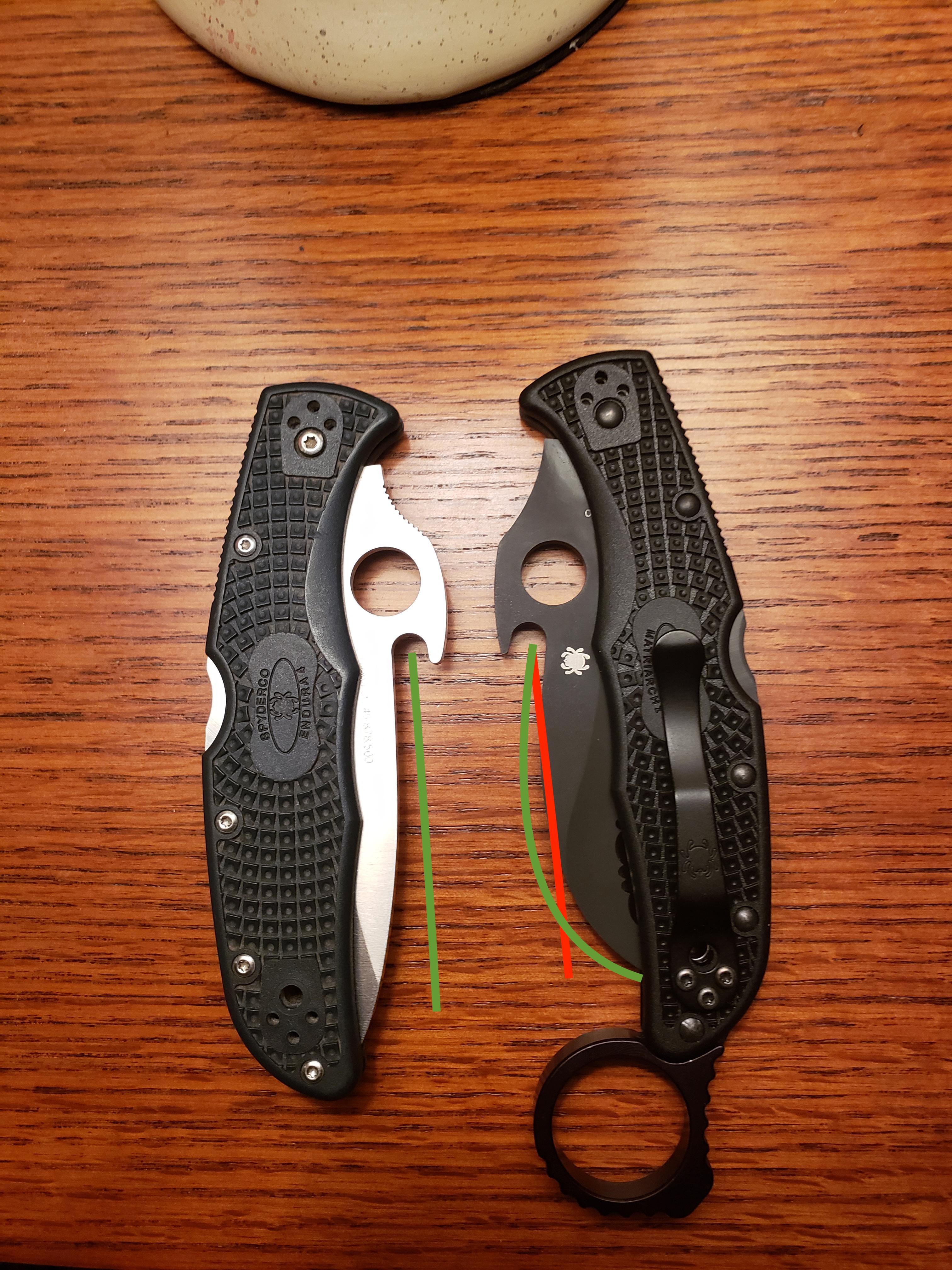 I lost my Matriarch 2, but I had the satin finish blade. I felt it was nice and easy to operate. It may be the DLC is higher-friction and is adding to the "catchiness" of your Matriarch's wave. I wonder if you could polish the DLC without removing it? Just on thew wave itself.

It’s definitely to do with the blade design/shape.

At first when I read your post, I thought you meant that your Matriarch’s wave’s inner curve was jagged and rough from the machining, but in the pics I see you were talking about the tip of the hook itself. I don’t own a Matriarch, but from the pics, Spyderco ‘flattened’ the back of the blade a little bit above the hole to reduce its profile in the pocket, resulting in a narrower tip for the hook.

Never paid attention to it - still learning new stuff. Just pulled out my Matriarch 2 - same wave as yours.

First waved Spyderco I ever handled was the Delica. Playing around with it I noticed it did not catch as well as my actual Emersons. Decided to pass on it. Just got the Matriarch 2 because of the history behind it.
Top
Post Reply
6 posts • Page 1 of 1