Tried doing a search and pulled up nothing.

So I understand that the intent behind the design of the Civilian (and to a degree the Matriarch) is Self-Defense. From the unique design there was obviously a specific technique. My question is how were they to be used in that capacity?

If I were to guess I'd say disabling attacks that would allow you to create distance to either get away, access a firearm, or get help. I'm thinking along the lines of "Defanging the Snake" as in FMA, or Comma Cuts as taught in MBC.

James Keating once said in his video of the Civilian, words to this effect:

"When you show them the slab of meat you sliced off their forearm, they tend to stop wanting to hurt you."

Mr Janich might echo that paraphrased statment?
It has being years since I saw it, and I am old and doddery...

He did use a Comtech Civilian Trainer in wood ( maybe Koa), and sometimes two...
Top

There was also some made out of a hard white plastic/resin. No idea of the company that made them, I just recall using their trainers (and buying 2 based on knives I had at that time) at the Riddle of Steel.
Top

Someone offered me a copy of his DVD for the Civilian.
I appreciate the offer, but I do not steal someone else's intelectual propery...

James Keating is a member here known as as maajak...Short for Master At Arms James A Keating, but has not posted for years.
Top

May be wrong, but I believe the Civilian was originally designed to be a maximally effective last ditch "flail away and pray" weapon for Federal law enforcement officers who where not well untrained in knife fighting. The Matriarch was originally made at the request of Spyderco's South African distributor (RAMCO?) for similar use by women there as an anti-rape/anti-kidnapping defensive weapon at a lower cost than the Civilian.
Paul
My Personal Website ---- Beginners Guide to Spyderco Collecting ---- Spydiewiki
Deplorable

The Civilian was developed to cause maximum damage with minimal skill. Sal created the Reverse "S" blade shape to replicate the mechanical function of an animal's claw--piercing with the tip and drawing the material to be cut into the concave of the hawkbill section. One disadvantage of hawkbills when cutting limbs is that they can hook on bone, stopping the action of the blade. The "belly" near the heel of a Reverse "S" cuts aggressively, but also "fills" the base of the edge's concave curve. If you make contact and start the cut there, it pushes bones away and feeds the material into the hawkbill section.

During my service with Spyderco, I've had the honor of meeting two people who used the Civilian for "serious" purposes. One was a law enforcement officer who was ambushed by a suspect who tried to take his gun. The officer, to his great credit, had trained for that contingency, maintained control over his gun while drawing his Civilian and killing his assailant with it. The other was a U.S. Army soldier who used it in the context of providing critical medical care for a fellow soldier wounded by an IED in Iraq. Both men assured me that the cutting power of the fully serrated Reverse "S" blade is incredible.

Although designed to be effective with gross motor skills, James Keating took the design and maximized its potential through his in-depth knowledge and skill. His video on the Civilian was actually one of the first to show karambit-inspired technique, long before karambits became fidget spinners for knife guys. James is brilliant and his depth of knowledge on the esoteric aspects of the martial arts is unparalleled.

Back in the day, COMTECH sold Civilian trainers made from exotic wood that were hand crafted by Rob Langford--a COMTECH instructor and one of Jim's primary training/demonstration partners in his early videos. The plastic trainers were molded from resin in rubber molds. The molds were often created by taking real knives, building up the edge thicknesses with clay, and then coating them with silicone. This was done by Edge Molding Company, a partner business of James and COMTECH. Sadly, EMC betrayed James and disappeared.

If you're looking for a bit more history on the Civilian, Matriarch, and their variations, here's a link to an article I wrote for Small Arms Review magazine: http://www.smallarmsreview.com/display. ... icles=3091.

I hope this helps.

Thanx Mike for the info and the article.

I guess there is a lot of Spyderco History.


Stuart Ackerman wrote: ↑
Tue Apr 07, 2020 12:04 am
Someone offered me a copy of his DVD for the Civilian.
I appreciate the offer, but I do not steal someone else's intelectual propery...

James Keating is a member here known as as maajak...Short for Master At Arms James A Keating, but has not posted for years.

Postng the link would be fine. That's how I first met James.

Koa's one thing, the real deal is another "once bitten twice shy"! 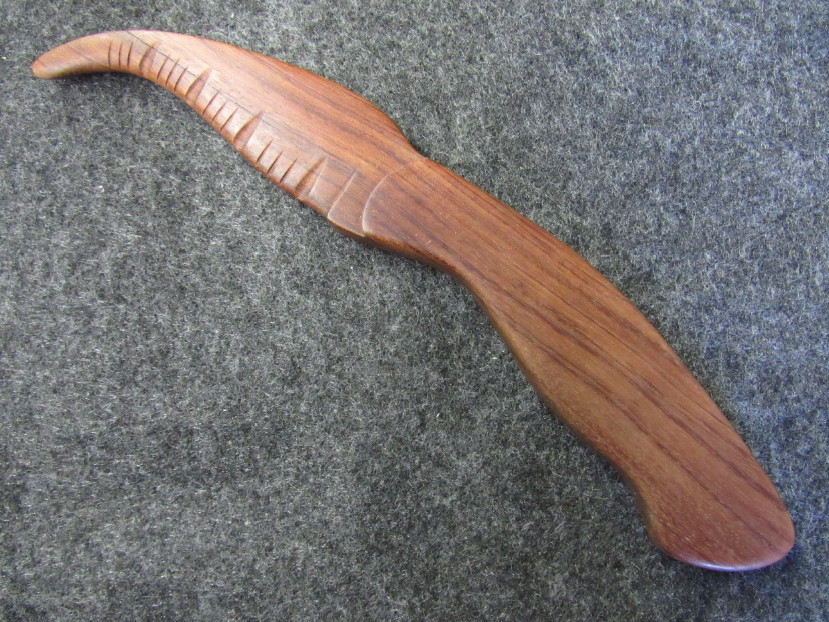 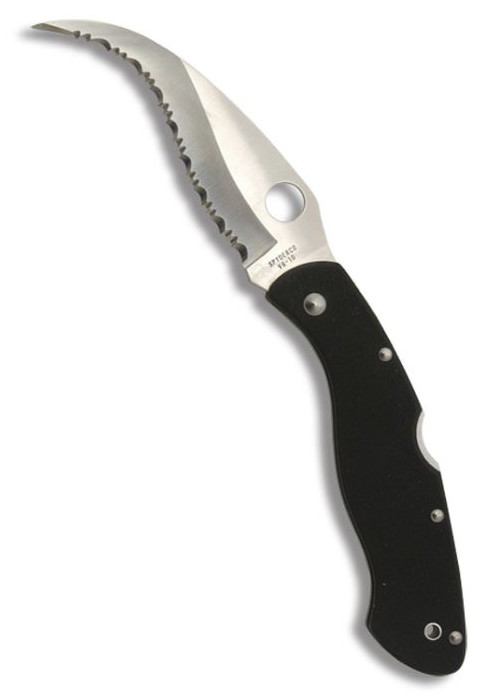 This thread has me wishing that I had not sold my Civilian. It has to be one of the most fearsome knives that I have ever held. To me, it's brilliant in its designed intent as self defense for someone like myself who has zero training in any kind of knife fighting. Unless you have some seriously willful ill intent I can't imagine the very sight of one not being a deterrent.

EDIT: And thank you to everyone above sharing some great information. Just an awesome read!
Do right always. It will give you satisfaction in life.
--Wovoka
Top

These knives are rarely seen, pictures always make a thread better! Actually took this one on Sunday while doing some yard cleanup. Didn't feel like folding it back up and putting it in my pocket when picking up some sticks from under the tree. "Hanging out" sufficed 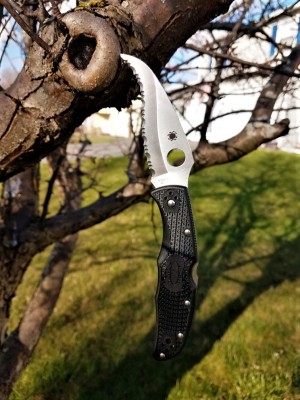 Thanks for the permission, Sal...

For the DVD of the Civilian and other stuff that Mr Keating is adept at...

Almost to the bottom of the page, look for these words?

Spyderco Civilian
Learn the unique abilities of this or any other hookbill style folder, plus a section on lifesaving options as well.
Top

I cringe everytime I see a Spyderco Civilian. In a good way.
Top 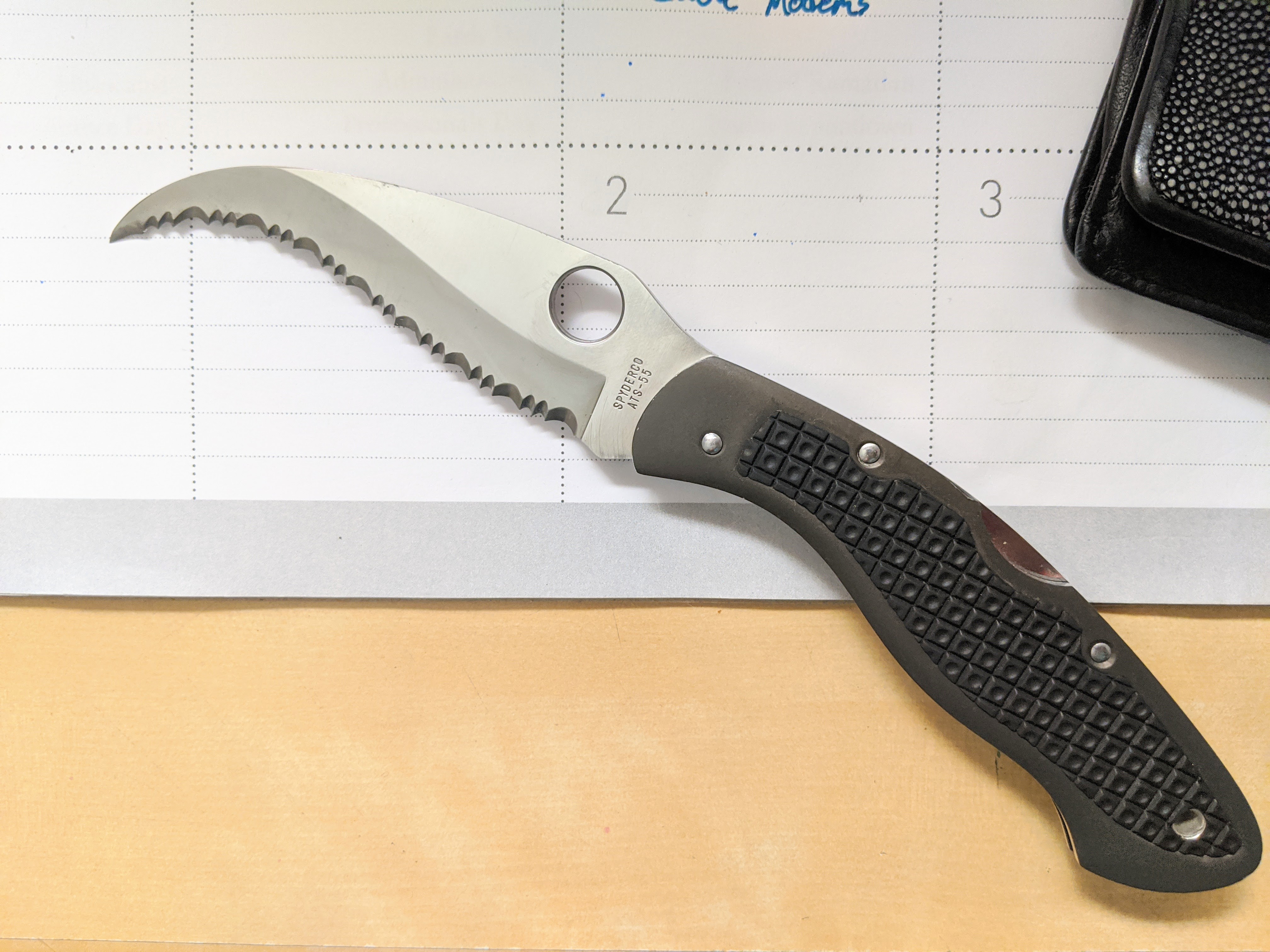 Definitely a classic. Don't have much reason to carry it when working at a desk nowadays, but I used to take it on long-distance motorcycle trips back when that was still a part of my life.

Edit: as you may be able to see from the comparison with other photos in this thread, the tip on mine didn't survive the 1990s. I'm not the original owner, but it's fun to make up stories about what happened.
Last edited by JacksonKnives on Tue Apr 07, 2020 11:01 pm, edited 1 time in total.
—Daniel Jackson
Top

I have never held or owned either of these models, I think I really need to fix that...

I would suggest the all black Matriarch with the Emerson Opener.