I have an m4 pm2 and it's one off my favorite carries. In personality really like the "worn" look a pains gives a knife so I love carbon steels and dlc coatings.

I've read the rex 45 patinas and I'm thinking of buying a second pm2. Knowing all this, what would your choice of steel be and why?

Also, I know I'll need to buy from the secondary market since these were all Sprint runs
Top

Honestly, MY choice would be the S30V "base" model...great all around EDC steel.

But since you'd like it to develop a Patina: Rex45 sure would be a good choice.
Top three going by pocket-time: Endura 4 in VG 10/Micarta-scales; Stretch 1 in VG 10; Endura 4 in HAP 40
Top

Agreed, I have the combo edge and love it.
Top

Agreed, I have the combo edge and love it.

K390 if you want something that M4 wishes it was.
Top

Agreed, I have the combo edge and love it.

Yep, 52100 combo edge. Excellent choice imo, and still available for 40% off msrp at knife center. If you absolutely need plain edge only, I'd get the k390 pm2 from BBS.
- Julia

Another vote for K390.
- it is availble now at a better price than REX45 on ebay
- if patina is what you seek, it will patina easier than REX45
- it is arguably tougher than M4 - my experience; not sure about how it compares to REX45 in that respect
Peter
Top

Maxamet. It takes a little longer to develop patina, but when it does, it is awesome. Plus it has that almost mirror like stone wash that looks incredible from the start. I have a pic of my old Maxamet para3 with a lovely dark patina. I’ll try and find it and post so you can see what I’m talking about.

ETA pic: I know not the pm2. But it shows how Maxamet darkens up. 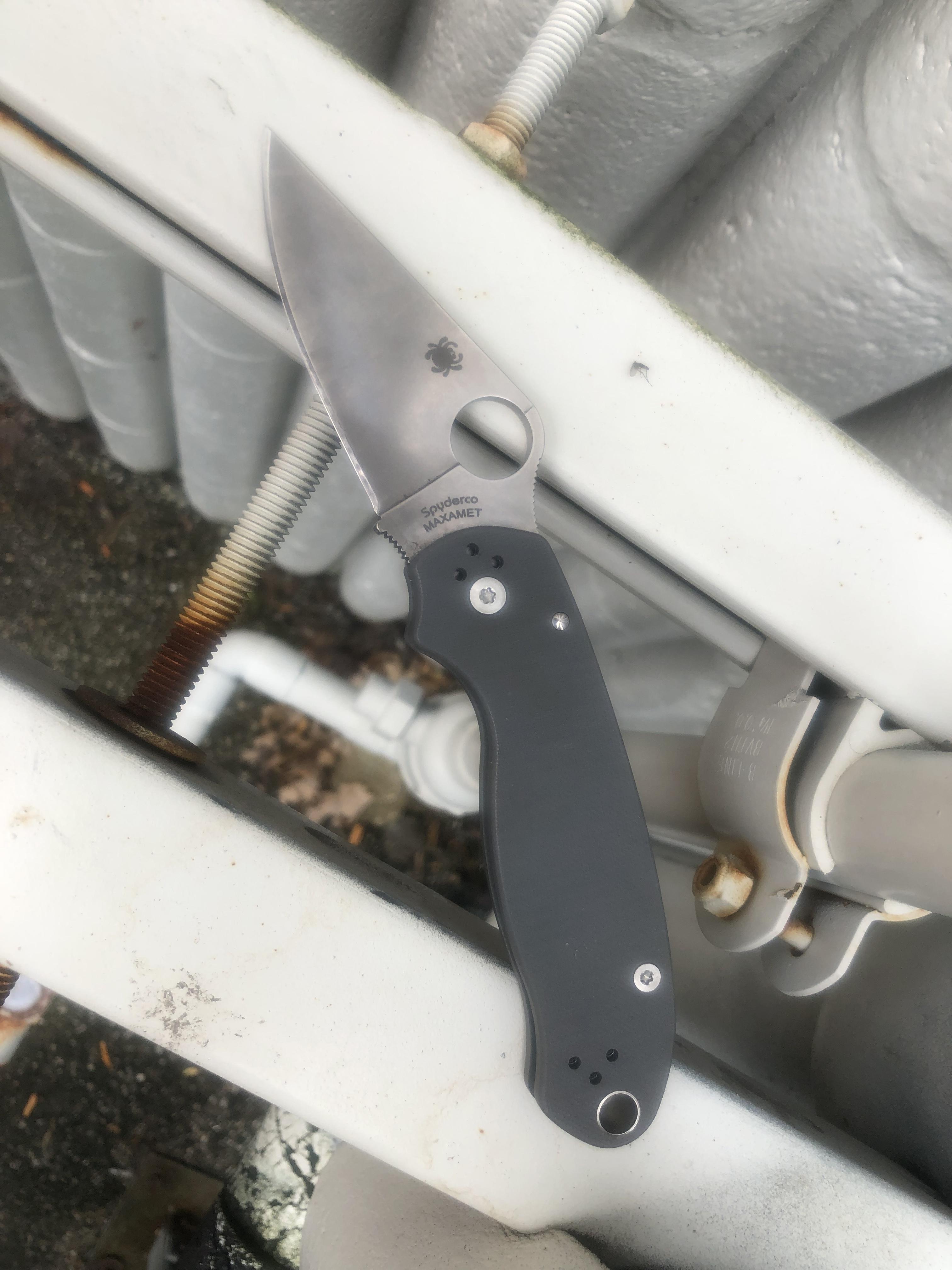 Maxamet for sure. It can develop a patina and gives you the best edge character. You really have to use it to get an understanding for how useful an aggressive edge is.
Top

Which will be easiest to maintain with a basic sharpening system? I have a sharpmaker and a set of diamond stones, I generally only use the stones when the sharpmaker isn’t enough.
Top

I think I would try and hold out for the s45vn sprint coming up. And then of course the tanto, but that could still be a long ways away.

All of those options seem good to me if the price is right. Maxamet is a production run (again?) so I might wait on that. Although even though its a production model it will still probably be hard to get. But I also dont know how much I trust it in a general work knife. There was a thread on bladeforums where 2 or 3 people had snapped a maxamet blade.

If you know how to prevent rust then 52100 might be a good option. It should sharpen better than the rest. But rex45 and k390 are also great options. Tough choice.

Edit.
Saw your first post where you love a patina. 52100 would be a great choice. It should patina very easily from everything I have read.
Top

Which will be easiest to maintain with a basic sharpening system? I have a sharpmaker and a set of diamond stones, I generally only use the stones when the sharpmaker isn’t enough.

Maxamet, k390, and rex45 are all run much harder than 52100. They will have significantly longer edge retention, but take more work to sharpen. Personally, I have avoided maxamet because of its reputation for being a real PITA to sharpen. 52100 is very easy/quick to sharpen, on the other end of the spectrum.
- Julia

The 52100 will patina the most/easiest, and it’s definitely the easiest the sharpen. Those grippy CF scales are the bees knees too, imo. They’re a few grams lighter than regular g-10 scales but still have that grippy texture. My favorite Spyderco scales to date.

You can get all sorts of pretty colors in the patina(strawberries will give it a purplish-pink patina for example, steak will make it blue), but those pretty colors eventually will turn to grey/darkness.

I love my 52100 Para 3, it gets spooky sharp (similar to Super Blue), but it wouldn’t be my first choice for tougher jobs. The other steels pretty much blow it away in every category except sharpen-ability.

I’d go with k390 or Rex45 if you want a slower setting patina in a higher performance steel.
Team Wharncliffe
Top

Which will be easiest to maintain with a basic sharpening system? I have a sharpmaker and a set of diamond stones, I generally only use the stones when the sharpmaker isn’t enough.

52100 is in a totally different class of steel. Great stuff if you like sharpening and especially if you don't want to bother with diamonds, but on Larrin's "relative CATRA cut-test performance table" it shows up as 50 compared to M4's 168. (old-school 440C is 100.)

K390 and Maxamet are on the far end of the other side of the scale. Maxamet tested to a 222 relative to those numbers for wear resistance.

Here's Shawn's breakdown on characteristics of a few of these:
https://www.youtube.com/watch?v=PzIEuz0ogoE

Here he talks about grain refinement in Rex45 and how it takes a finer polish than M4, which is more aggressive: viewtopic.php?f=2&t=80749

I prefer something like 52100, since I like knocking the bevel down to a razor-like angle. But if you want to keep the factory edge angle, there's nothing wrong with having better wear resistance.
—Daniel Jackson
Top