I’m curious to get people’s thoughts on this because I don’t get it.

I’m just wondering what people’s thoughts and rationale are. Do you use folders for food prep? If so, why? I do it very rarely under strange circumstances, but to me it’s just much simpler to clean and maintain traditional kitchen knives.

I think people do it because they want to use their folder and don't have many uses for it. I think they also do it when they're away from home or at another home with dull cutlery.
I rarely use a folder for food prep. I enjoy using my kitchen cutlery.
Top

I never use a folder in the kitchen. Definitely prefer a traditional fixed blade kitchen knife. I will use a folder for food prep when camping, canoeing, on a picnic, etc. Also for eating apples on my couch.
- Julia

I use them away from home. I use a 10" chef knife in the kitchen. I prefer fixed blades for food prep, which is one reason I EDC a street beat. Easier to keep clean.

As far as folders go, the Police 4's make really nice food prep knives with their long, thin blades. The Manix XL also does well, its got the perfect amount of belly for slicing up sausages and veggies at camp.
Knife reviews:

Agree with all of the above, I’ve used a para 3 and PM2 for food prep on a camping trip... but never in my kitchen, lol
Top

I use a few different fixed blade Victorinox kitchen knives in the kitchen.

On certain occasions I’ll use a pocketknife for slicing an apple or something away from the kitchen. The knife is usually a SAK, which IMO works better at slicing fruit as I’m eating it than other folders.

I have used some Spydercos and CRKs for slicing up fruit, just because I felt like it. But I don’t make a habit out of it. The Spydercos I have that worked best for that were: Police 4 LWT, D4 FFG, Military, E4 FFG, and Caribbean. The CRK that worked best was my large 21 Insingo.

I don't use them in the kitchen. Unless I am ready to cut something, and don't feel like walking to the other side. Out of the pocket it comes.

Otherwise, all the time for food prep away from home - anything outdoors, picnic, road trip, office, restaurant when all you have is chopsticks and need to divi something up, someone's house with a knife block full of butter knives, etc.
Peter
Top

As far as spyderco folders that get described as being good for food use, Im pretty sure its just code word for a folder thats a really good edc design. Spydiechef, kapara.

If its just for a quick slice of a tomato or onion to make a sandwich I will use a folder for that. If its preparing a meal then its hard to beat a kitchen knife.

No doubt that a sharp, dedicated fixed blade kitchen knife is best for food prep.

But the ffg Endura, Stretch and especially the serrated Endela do a very good job either, and I just like to use those knives (and typically have one out of the three in my pocket anyway) so I sometimes just do so even at home when cooking.

In my job I am always on the road (car, bus, bike) and like to preper basic meals or sandwiches en route,sometimes I even start a little fire or use a little gas cooker for that when I am not in an urban enviroment.

Likewise in my time off, I am most times outdoors in the mountains and my folders get used for food prep quite often.

Tbh, that certainly is one of the main reasons why I prefer Endura-lenght blades as main EDC knives.

Though a fixed blade is easier to clean of course, its not a problem with folders either. I almost never disassemble my knives, just rinse them off, and they all work perfectly fine for me.
Top three going by pocket-time: Endura 4 in VG 10/Micarta-scales; Stretch 1 in VG 10; Endura 4 in HAP 40
Top

Blade geometry from Spyderco folders (which are more or less tactical) are diametrically opposed to my food preparations. And why should I make my live more complicated than needed, when I use a folder instead of a fixed blade, when it comes also to cleaning after food preparation?

To each his own, but for me a clear yes, I prefer fixed blades designed for kitchen uses!
Peter - founding member of Spydiewiki.com

I use folders in the kitchen from time to time.

For me it's not really a question of what's 'better' in the kitchen, more that the tasks required for food prep give me a good way to gain an understanding of the design and performance of a knife.

Often looking at knife reviews, you see some test operations like feathersticking, slicing prepackaged food, cutting up cardboard or packaging, maybe some cord cutting and the like. That's all to the good, but personally, peeling and paring fruit and veg, dressing out game meats for the table, julienning and brunoising veg, as well as basic stuff like opening packages and the like, also gives me a pretty good idea of what I like and don't like about a knife.

As mentioned above, sometimes a sharp folder is superior to a cheap, dull kitchen knife when helping cook at a friend's place or out on the road, or on holiday at AirB&Bs. I've cooked a lot of meals from scratch with my Superblue and VG10 Delicas, and have gained more respect for them as a result.

Sometimes these tests aren't necessarily a good way to understand a knife. The SE Tasman Salt is an example of a knife which doesn't necessarily shine in the kitchen, but is nonetheless a great knife.

Most of my all time favourites also work pretty well in the kitchen though. The Delica, Gayle Bradley, PE Caribbean, Waterway, UKPK, Police 4 and Lefty Millie are all a pleasure to use in the kitchen.

They don't come anywhere near my hand forged Japanese kitchen knives, but I've gained a better understanding and appeciation for them by using them in the kitchen. 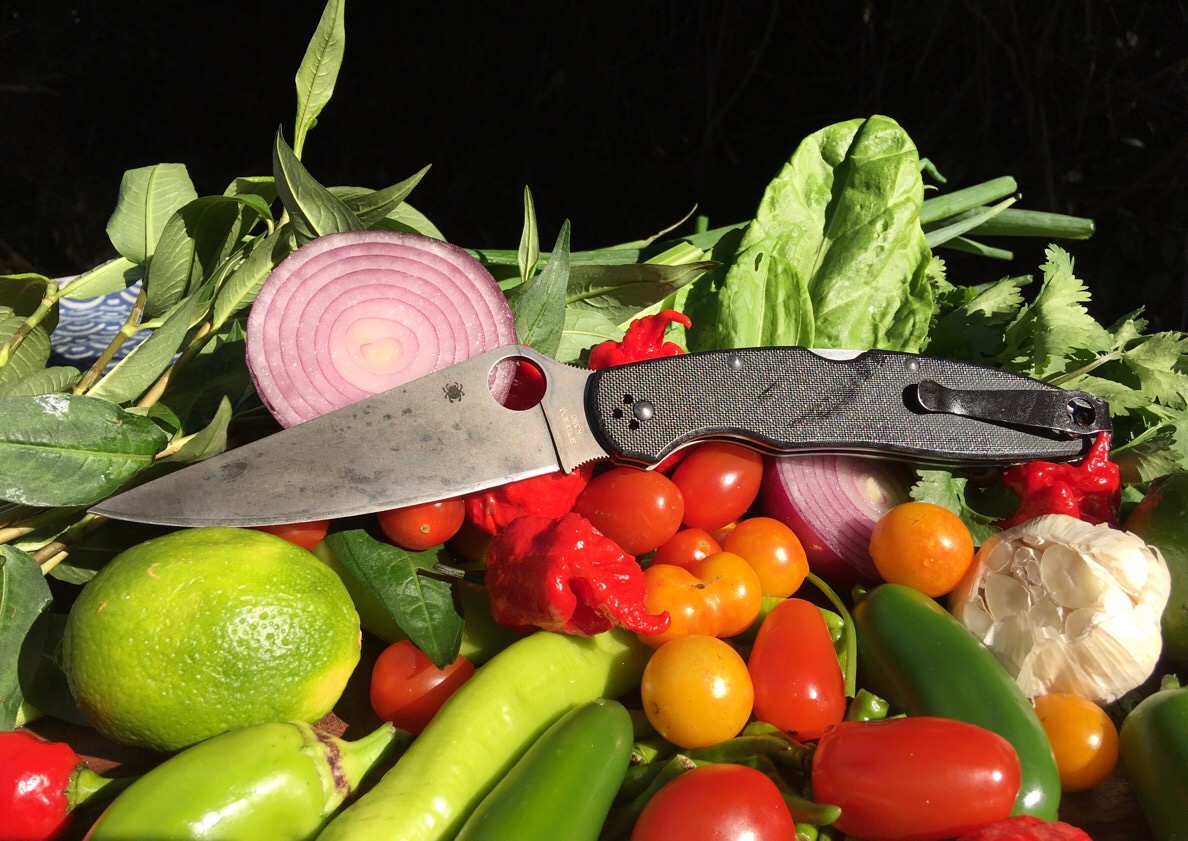 I do sometimes with new models to see how they perform. Slicing veggies will tell you a lot about blade grind geometry.
SHARPEN IT LIKE YOU LOVE IT, USE IT LIKE YOU HATE IT
~David
Top

Have a lot more fixed blades than folders.

I get stick from the misses because:
I have a knife from France with 5000 year old bog wood handle with mammoth inlay I use just for tomato’s
A Japanese butchers knife with 127 layers of steel just for meat.
Etc......
(Each one hand washed after each use)
Im a vegetarian as technically cows are made of grass and water.
Top

Generally speaking, the folder in my pocket is usually pretty gross, and not something I would cut food with without a thorough cleaning.

Aside from trying it a few times just to mix things up, I never use my folder for food prep unless there is no other knife available, which is rare.

I started keeping a Mora Companion in my truck specially for those "picnic" situations.
Last edited by abbazaba on Sun Dec 15, 2019 9:52 am, edited 2 times in total.
Top

They work in a pinch but when people talk about how great a 3” or 4” knife is in the kitchen it makes me think they don’t know how to use a kitchen knife.
Top

I use a ffg endura. And a mantra 3.
Mainly to use them and to enjoy cutting with a Spyderco.

I am afraid to say that a kitchen knife is better to use due to the much thinner blade stock...
Top


Just depends on what you're cutting. I don't need a 10 inch chef's knife to cut up carrots and celery or peel a potato but it is definitely easier to slice a tomato with a longer blade. I can't speak for everyone but when I say a Military is awesome for food prep I mean as awesome as a pocket knife can be at food prep not that I would choose it over a proper kitchen knife. The same Military is awesome at batoning through tree branches but I wouldn't choose it over a hatchet or saw if I were doing real outdoors work. I suspect most people are speaking in general knife capability terms and not so much like a pocket knife is the ultimate kitchen knife.


Also why don't we have a 5 inch Spydiechef c'mon now.
SHARPEN IT LIKE YOU LOVE IT, USE IT LIKE YOU HATE IT
~David
Top

I've used folders for food prep, and it's not enjoyable at all. The geometry is terrible for food prep, when compared to actual kitchen knives. At first it was a curiosity, because it seemed to me, that a large portion of knife users were dicing their dinners with folders. I had to see why. Turns out, I still don't know why, but it doesn't bother me one bit that others enjoy it.

I do use my folders for cutting summer sausage to snack on, along with cheese. If my folders are going to prep food, it's gonna be a snack, because the performance junky inside me, can't handle prepping an entire meal like that.

I suppose for some, it might be a matter of simplicity, or maybe a way to test the geometry of the blade.

...But in general, I'm all about high performance, Ergos, safety. That's why I've been accused of "deigning in the dark"...

Yeah... I've used a folder to prepare food while backpacking in the remote wilderness or when cutting up something I've just harvested from the yard. It would be pretty awful to have to use my fancy Spyderco folder in the kitchen where I have knives that are properly suited for the task. I approach cooking the way I approach putting an edge on my top shelf pocket knives: With focus and precision. Start with the best product for the intended use, and use the process that will achieve the best results.
Top

Don´t think anybody said this.. ?!

When I stated, that I prefer Endura-length blades in a general EDC knife partly cause I (have to) use my folders for food prep on the road or outdoors quite often, I meant a (almost) 4 " blade works clearly better for that than lets say a 2.5" one.

Sure an even longer blade would be even better in many food prep situations, but I would not like to carry such a long folder (for its closed package would be too long).

So for a general utility folder the ffg Endura is really good at food prep (but sure no where near a peroperly sharpened dedicated fixed blade kitchen knife)
Top three going by pocket-time: Endura 4 in VG 10/Micarta-scales; Stretch 1 in VG 10; Endura 4 in HAP 40
Top
Post Reply
69 posts