This is basically a grail knife for me, I've always wanted a PM2 in k390 with that Golden fit, finish and processing. Ever since the Police 4 was launched I'd have conversations on the phone with Micheal Christy and we both agreed how amazing it would be to have a PM2 in K390.

Being a custom Knife maker unfortunately means you have to buy belts, tools and pay bills so there isn't as much free time or income to buy knives for yourself.

This knife was acutually a gift from someone really cool I met at Bladeshow West, I am very very grateful, thank you Andrew! He had a second one that he gifted me after the knife show after I saw his and told him how much I wished I had one xD Quite a special knife to me now and when something is special you must use it to show appreciation

Using a CATRA Hobbygoni I measured the edge angle out of box. 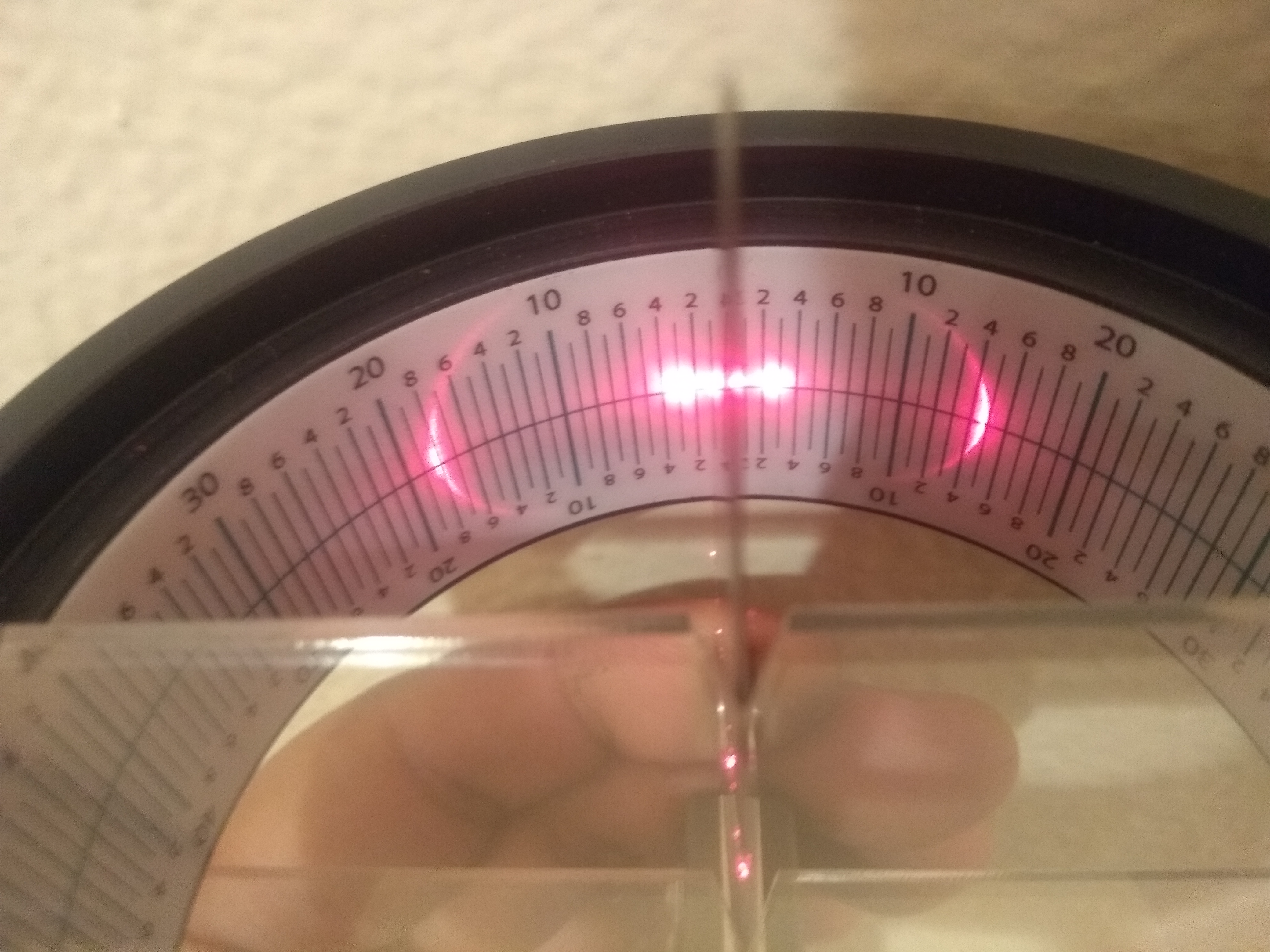 Factory edges have perpendicular scratches that reflects the laser light in a cresent pattern. 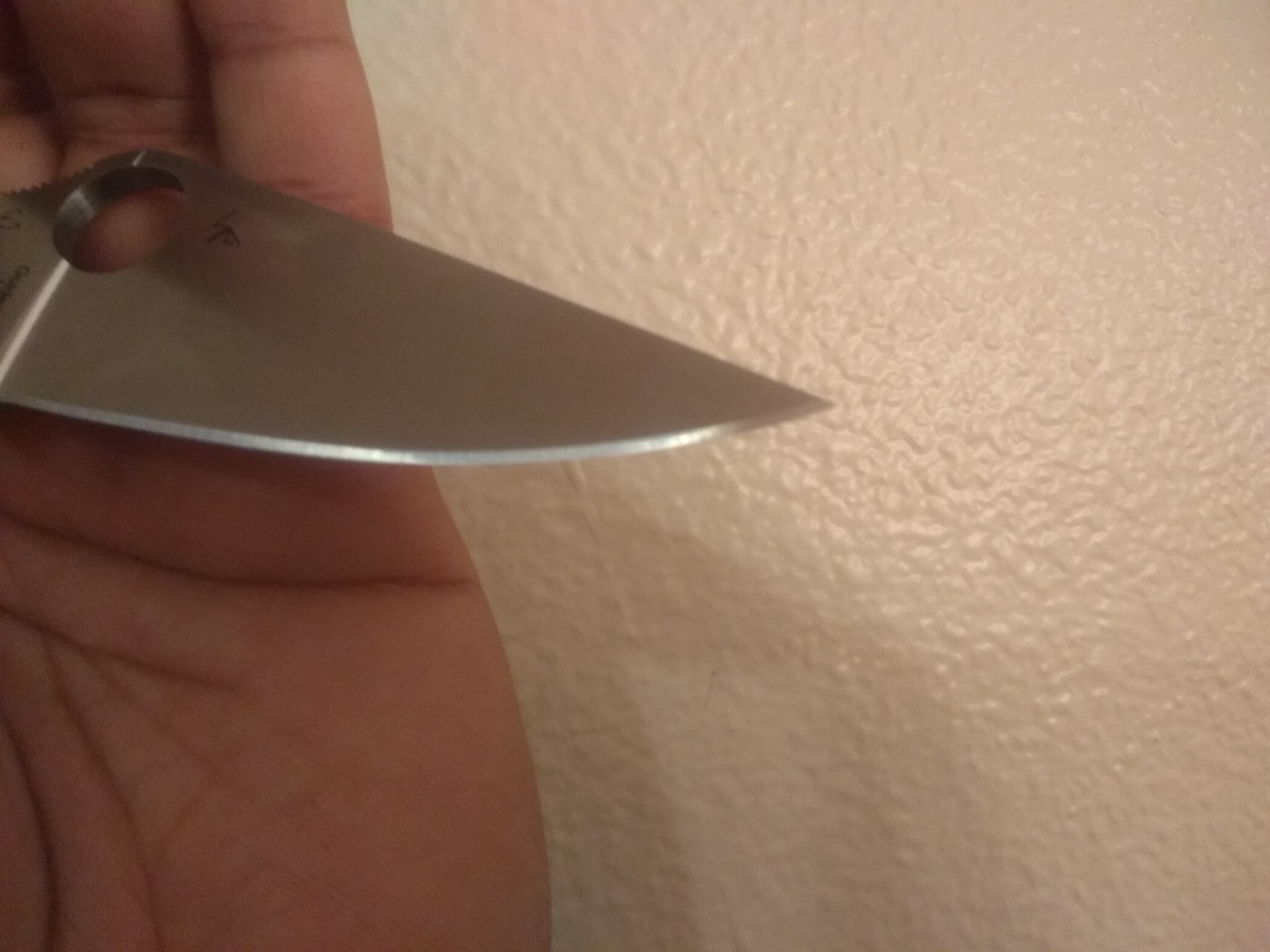 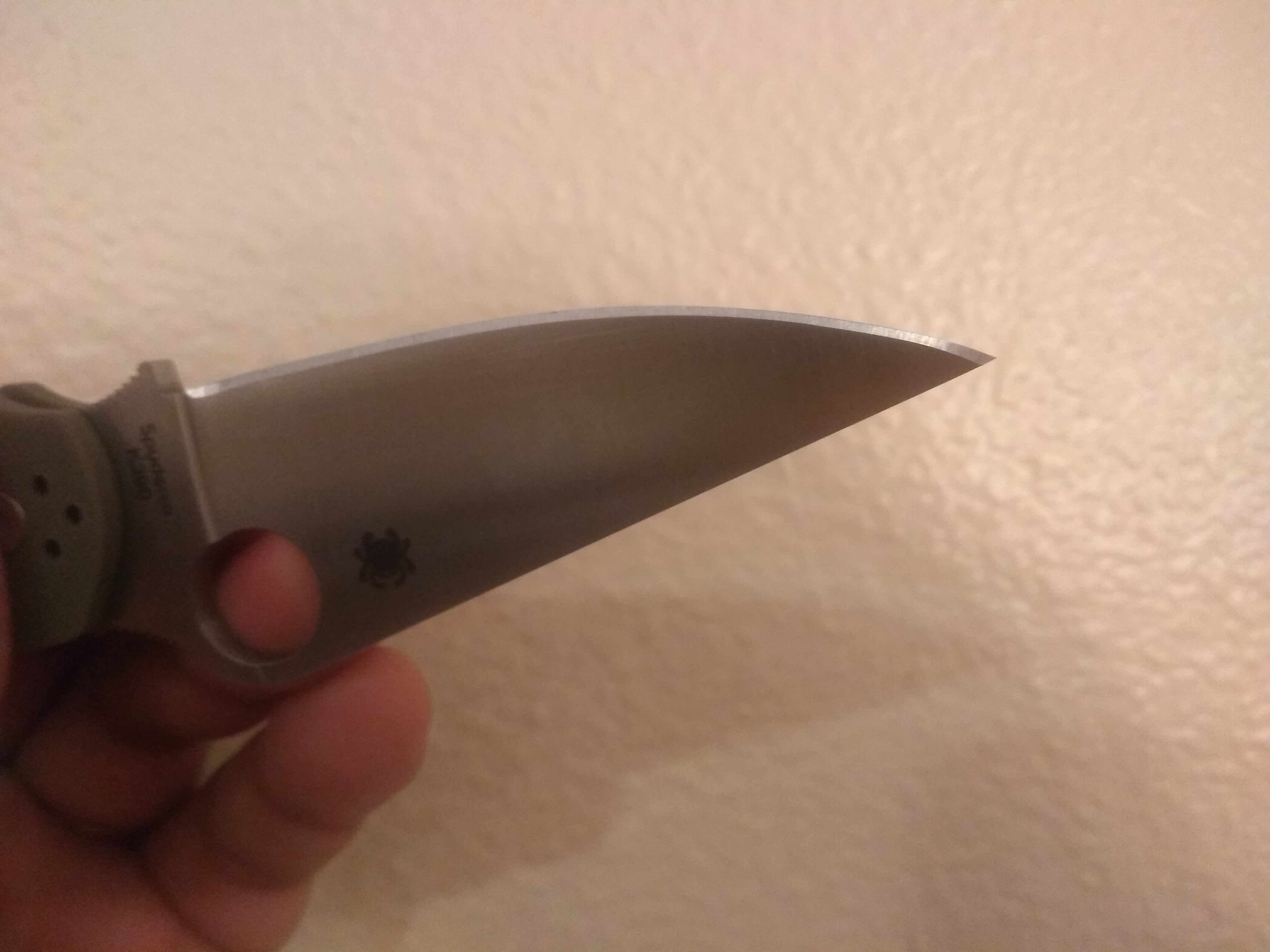 I used an edge pro apex to reset the factory edge to 14dps, Usually I do freehand for edge testing but I like to rule out the variables more for the spirit of testing and I've gotten better with this edge pro contraption.

I used a 400grit Poltava Metallic bonded stone.
No Strop 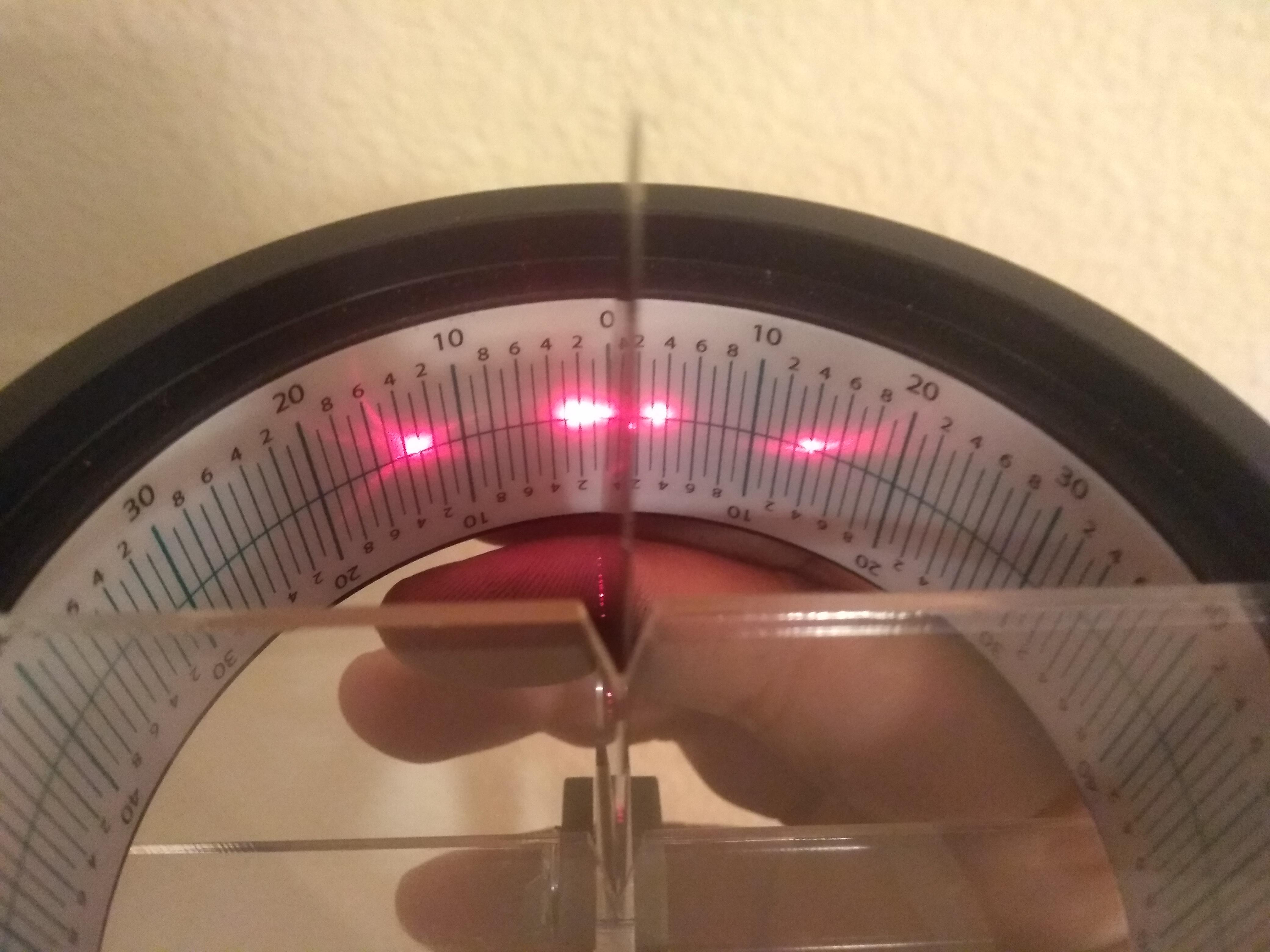 The dot is the edge angle, the cresents are refections off the scratches depending on the scratches orientation to the laser light it will reflect a cresent pattern Vertical to horizontal.

The cresent on the knife left side (right side in picture) is ~ 45 degree backwards scratches, teeth pointing back.
The knifes right side (left side picture) has a mixed scratch pattern. 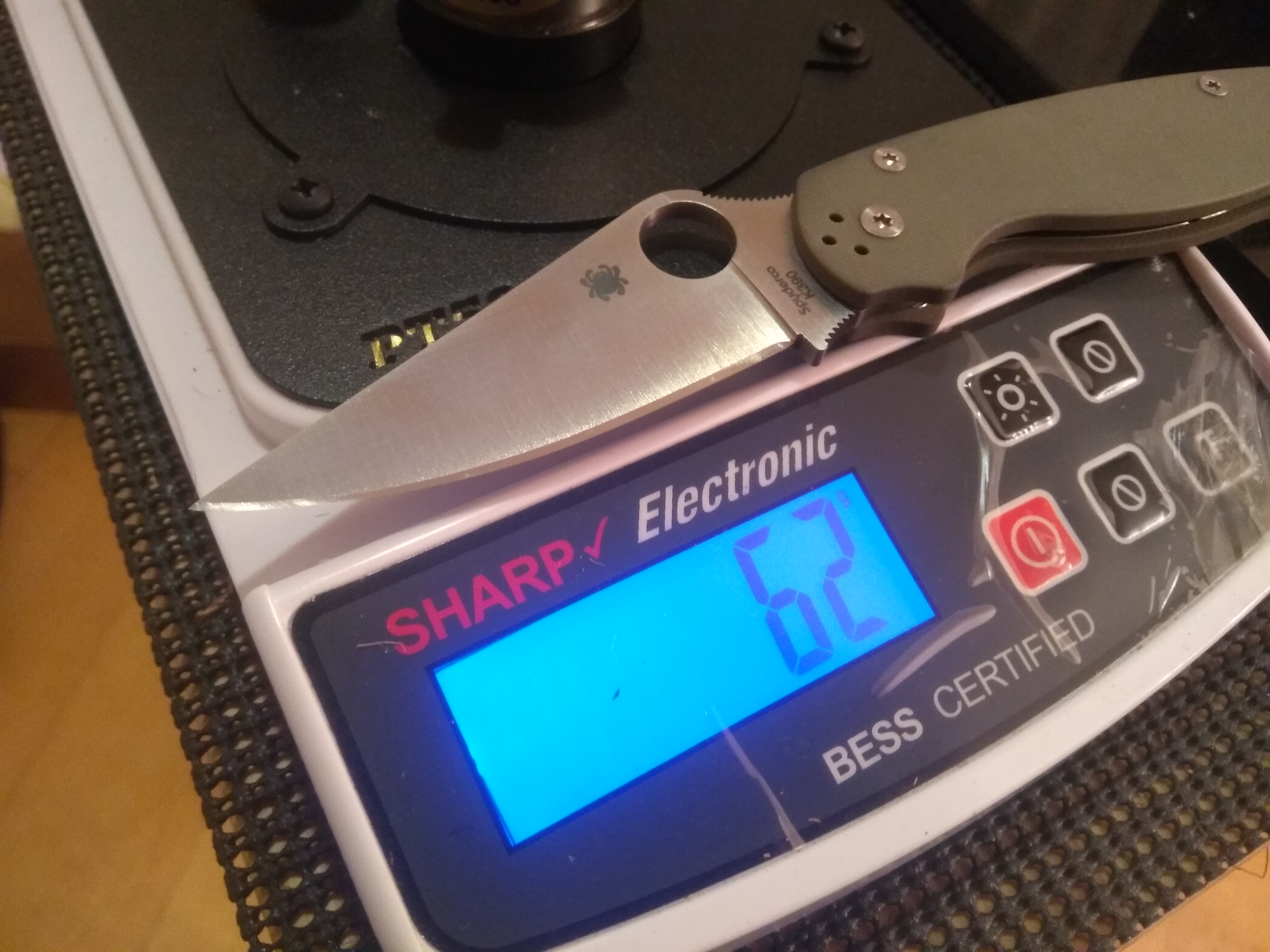 The knife was sharp and ready to test, this was a very low value mostly I get about ~100g with this finish.


The bevels are the same degrees set at the same angle on the edge pro but the grind is uneven so the bevels are not the same size. Usually with all production knives this occurres when the angle is dropped low like this. When the knife is sharpened freehand, the sharpener Natural evens out the bevels by matching them by eye. With a fixed angle system it seems more tricky. 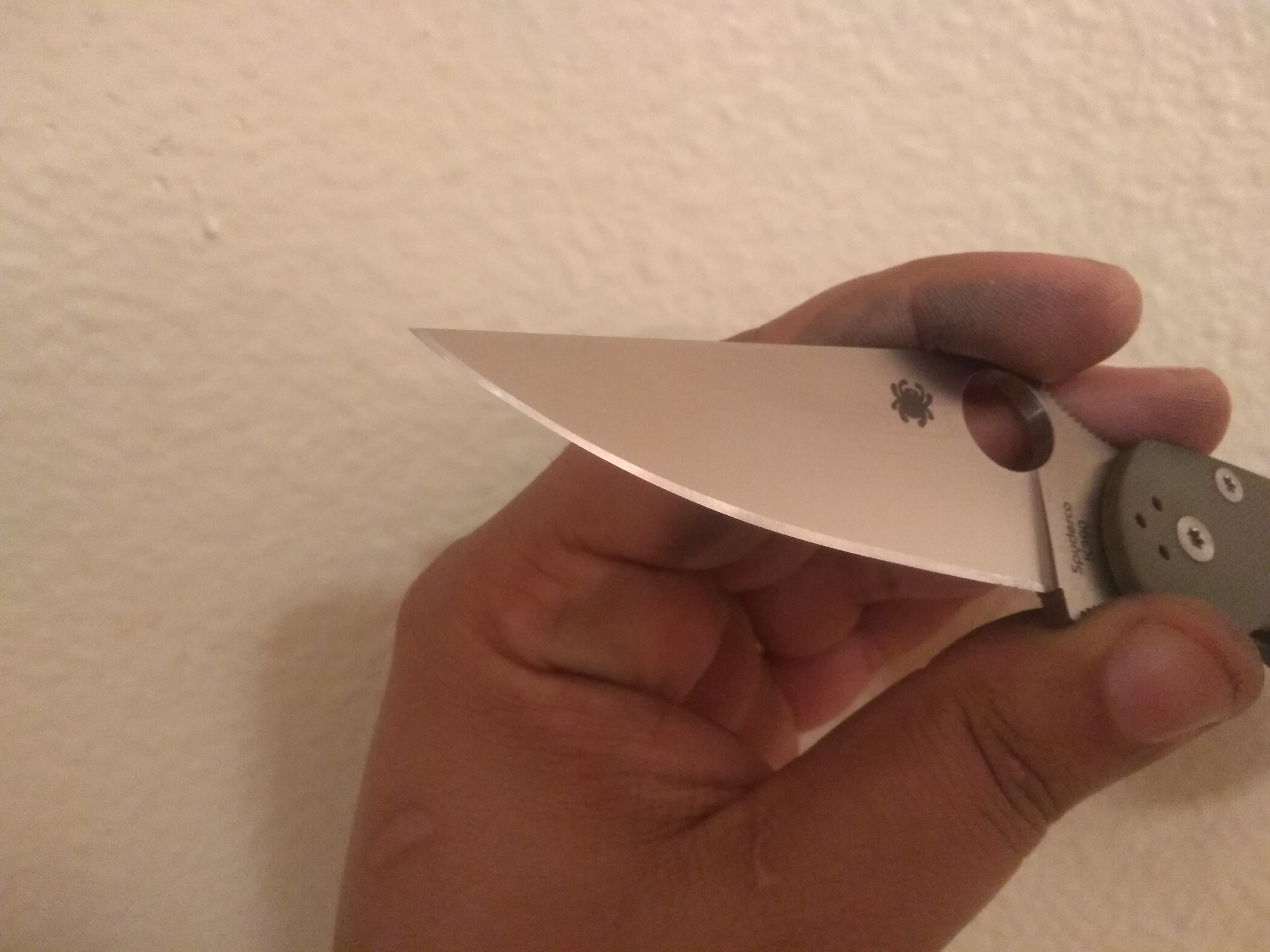 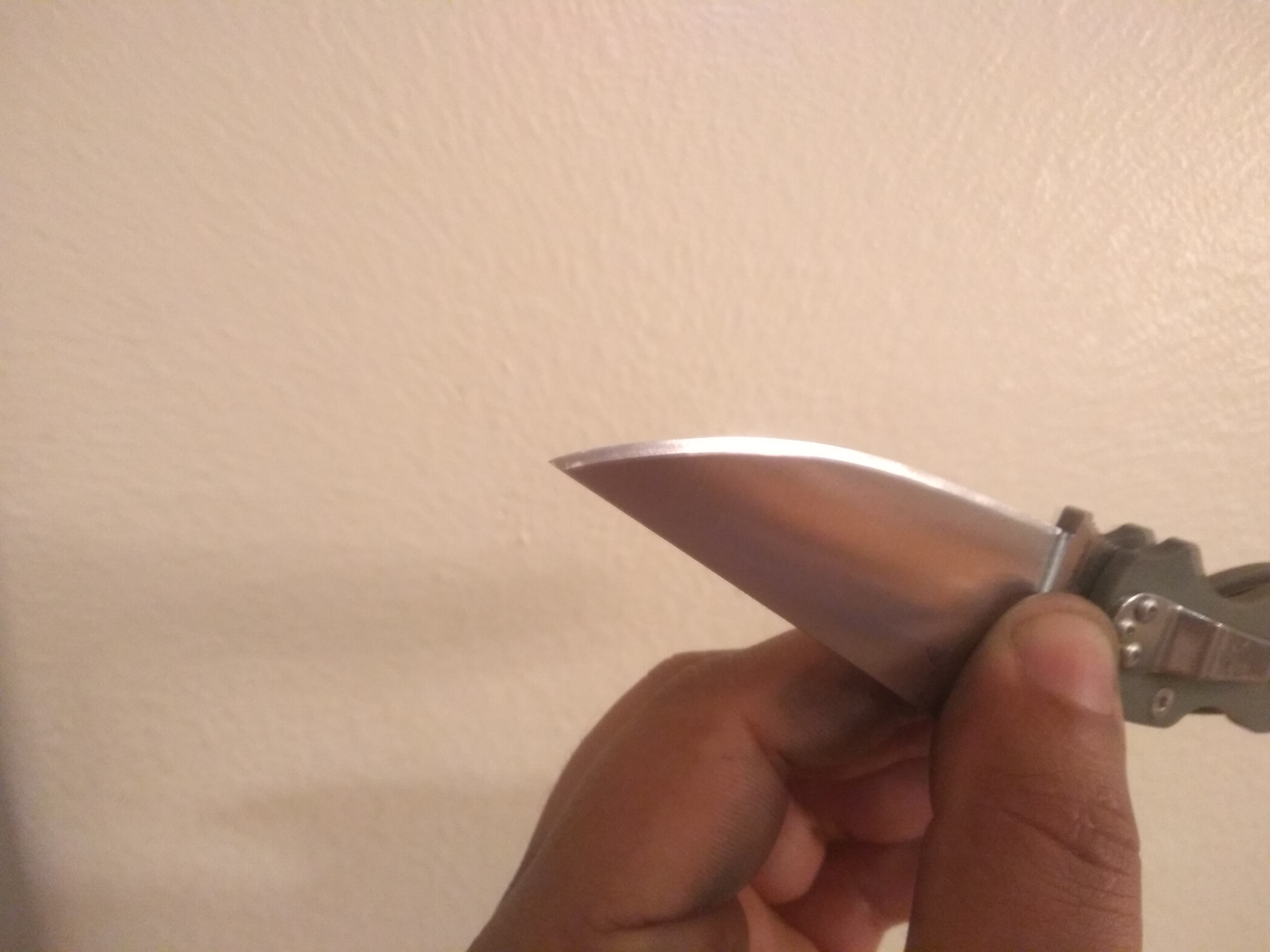 
0.026" BTE was the average thickness behind the edge in the testing area at the belly with a pair of high end Mitutoyo calipers

3/4 Manila Rope was cut with a 7 pass slicing motion to make a complete cut through the rope on a soft wood cutting board.

The Test ends at 100 complete cuts through the rope and we see how sharp we are at the end of the test. I found in my experience, cutting until the knife could no longer cut was an exercise in physical endurance more than steel testing as these fancy steels can keep going and going.

Weight was recorded on a postal scale.
Started at 7lbs and ended at 15lbs after 100cuts

Every 20 cuts was measured. 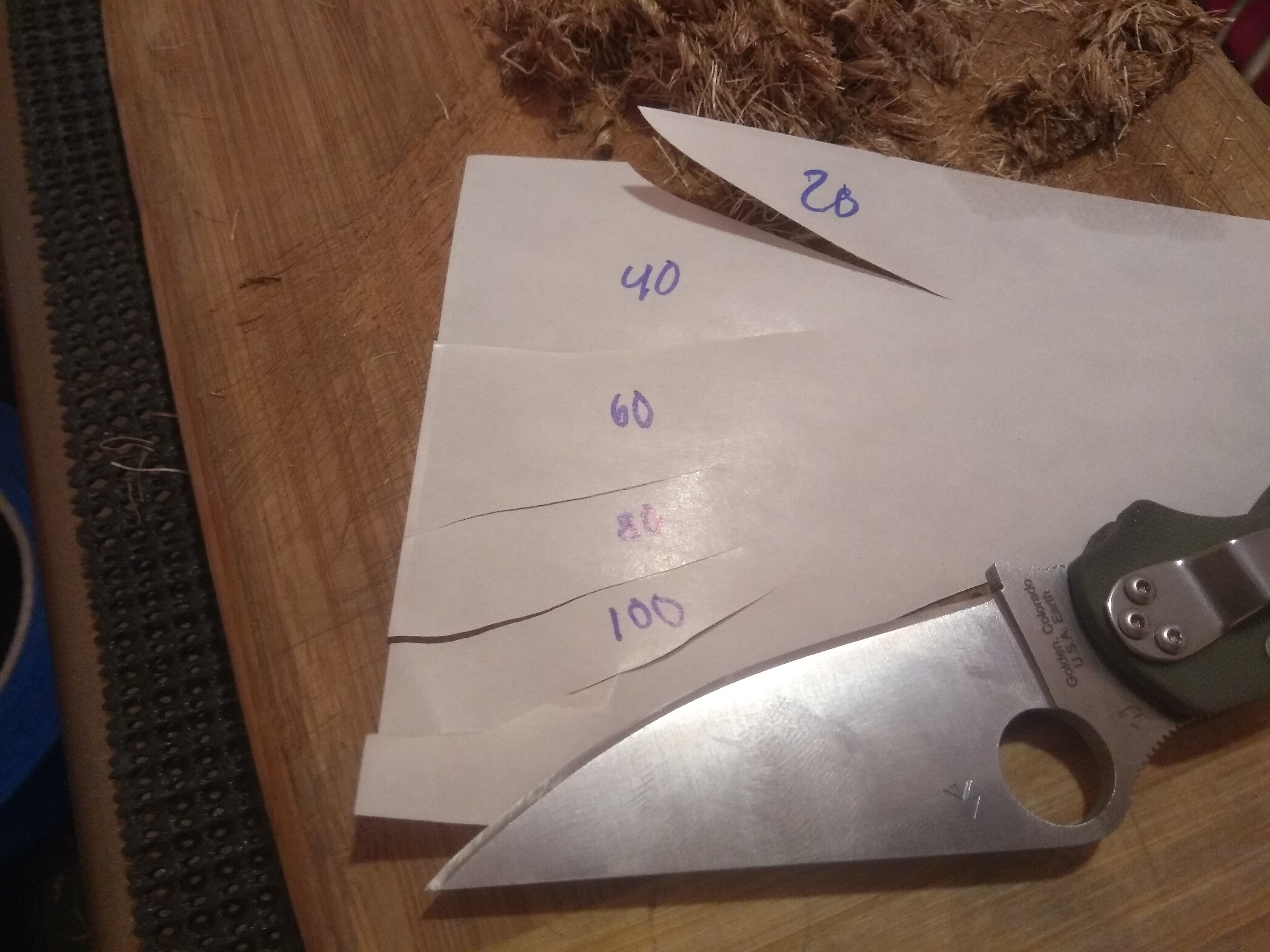 Started at 61g BESS
And ended at 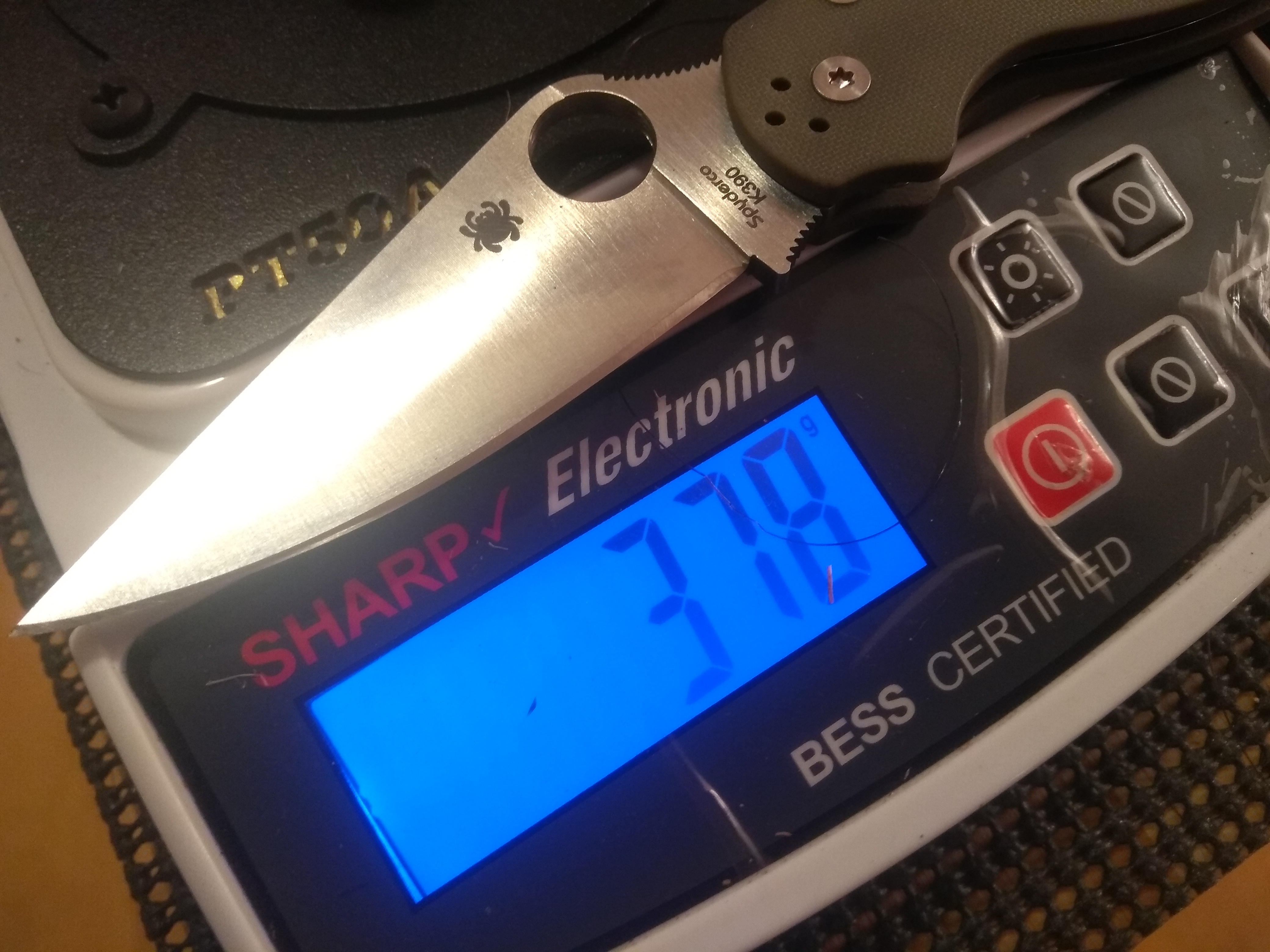 So while it could still cut paper with effort, this would be noticeably duller and most users would want to touch up the edge of it was in this condition however your average Joe would think it's plenty sharp

I thought it would be fun to share and see how nicely the edge recovers from stropping.

I used a leather Benchstrop loaded with 1um diamond spray. 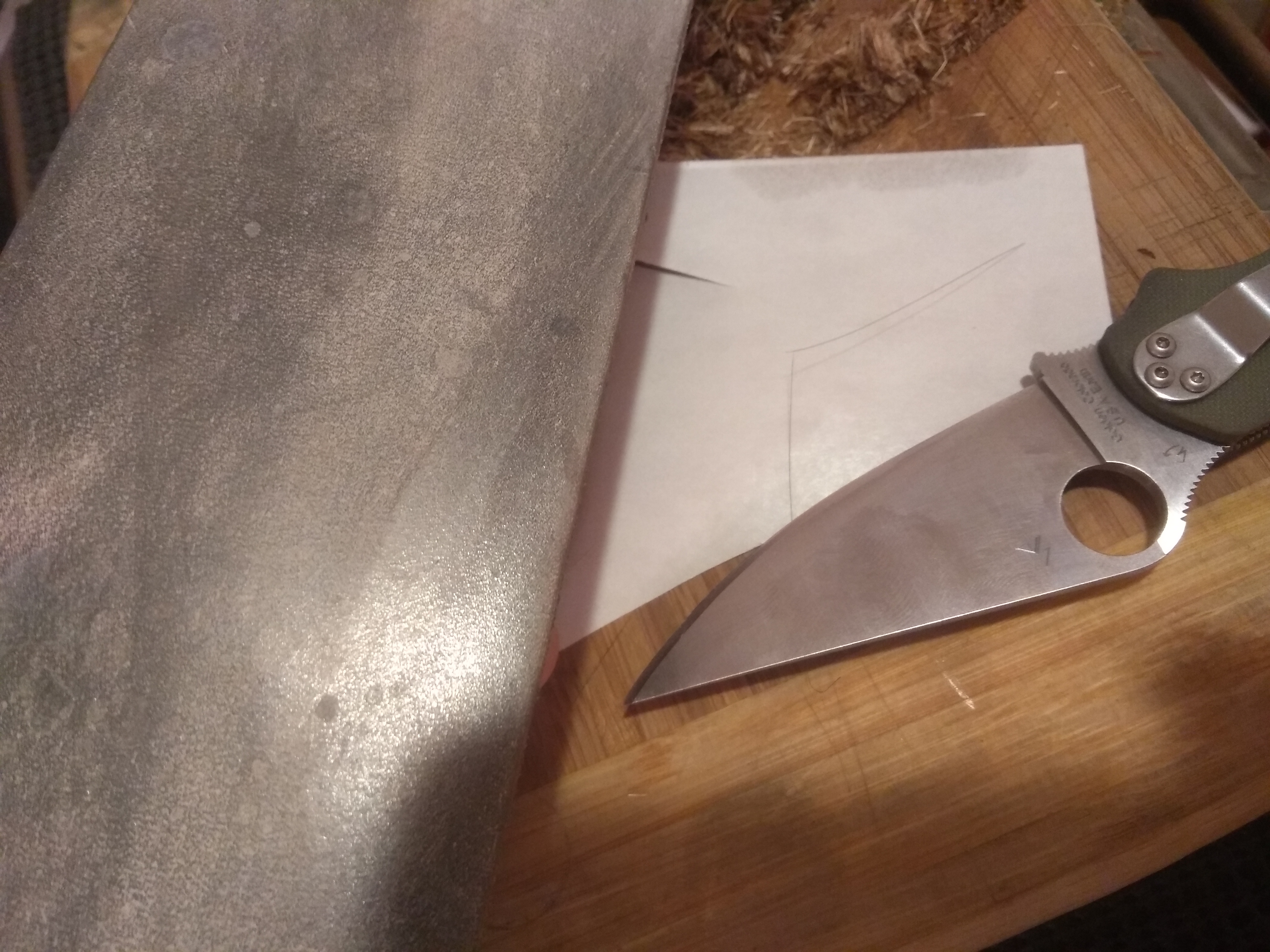 I was able to get those refined and polished teeth to catch a hair and crop it but it took some effort and I would have wanted to recrisp and apex again on the stone if I wanted the edge truly sharp, I noticed there was some raking on the leather which means there was some folded blunted steel at the edge that would need to be removed on the stone for a nice edge. 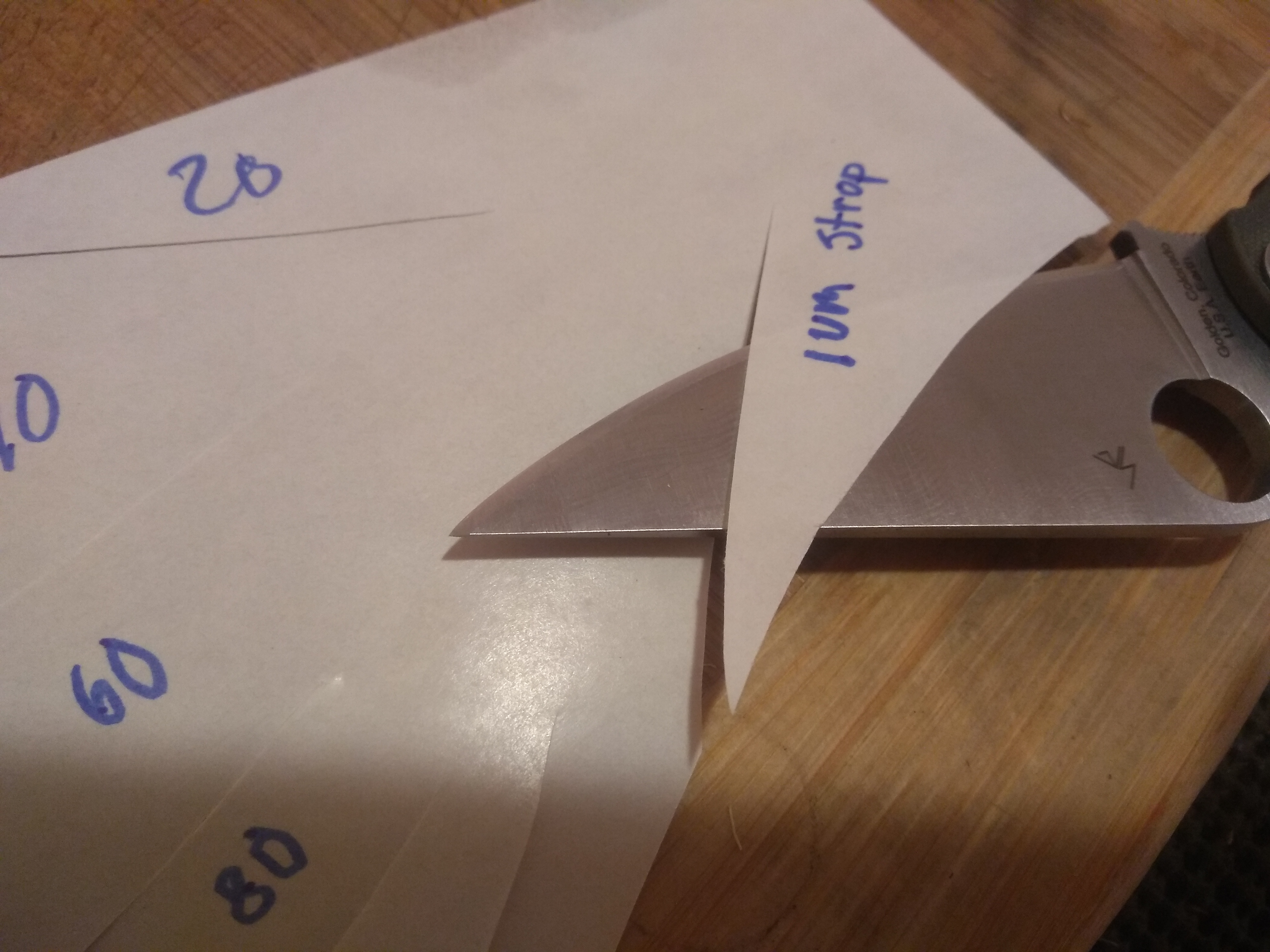 The strop was effective at "honing" the edge enough to cut paper with less effort again however.

But the stroped edge did not recover the sharpeness completely to where we started off the stones. 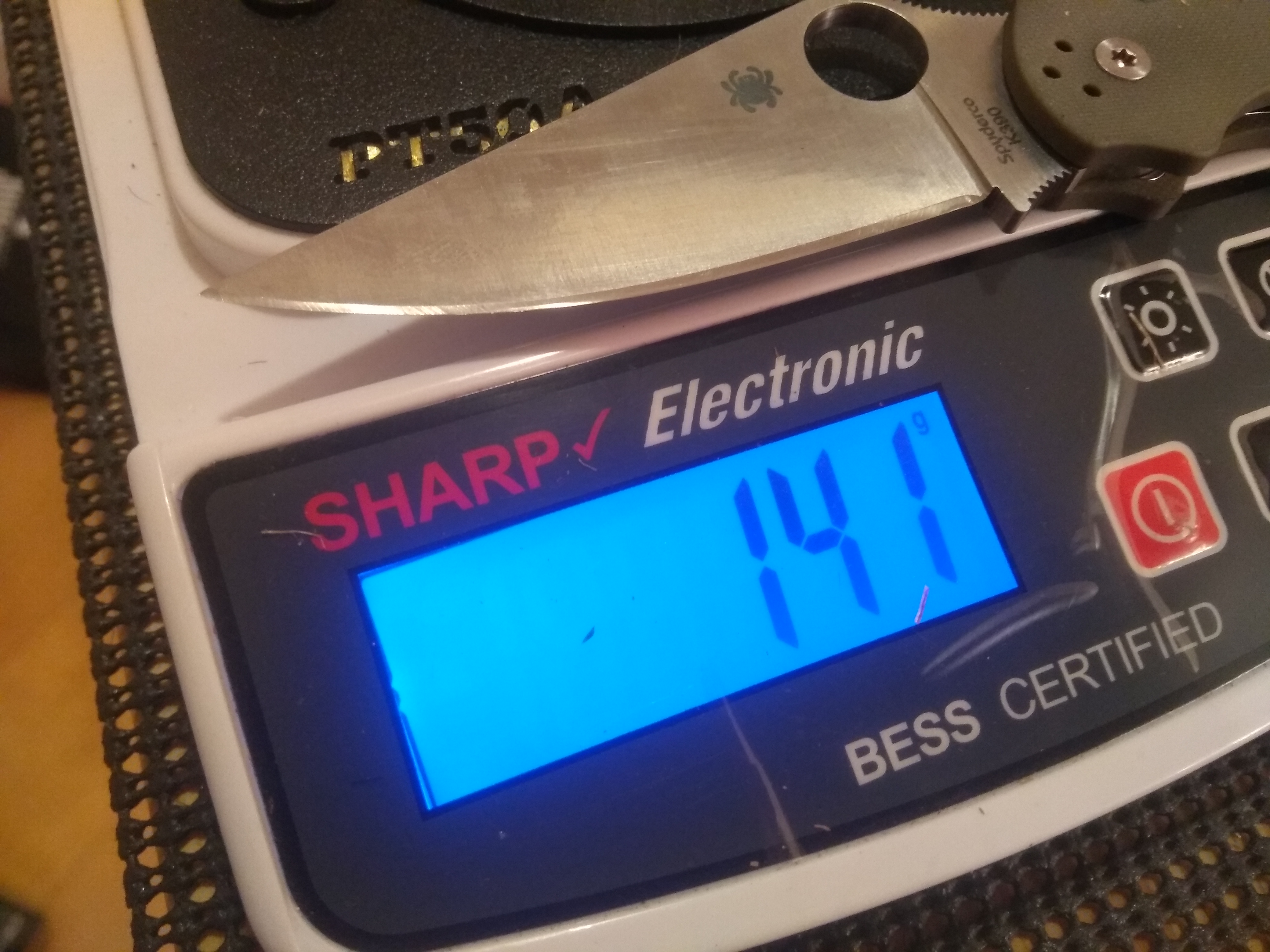 This is why strops are used as edge enhancers and not edge creators. They can prolong sharpeness but they cannot make a dull edge as sharp as a stone can because strops don't cut the steel at the apex as efficiently, they simply refine and polish, especially the teeth.


This is a pretty good result, it would be interesting to test compared to a Police 4 but the Geometries are very different with the factory edge on the police 4 at 28dps and 0.030" bte before reprofiling. 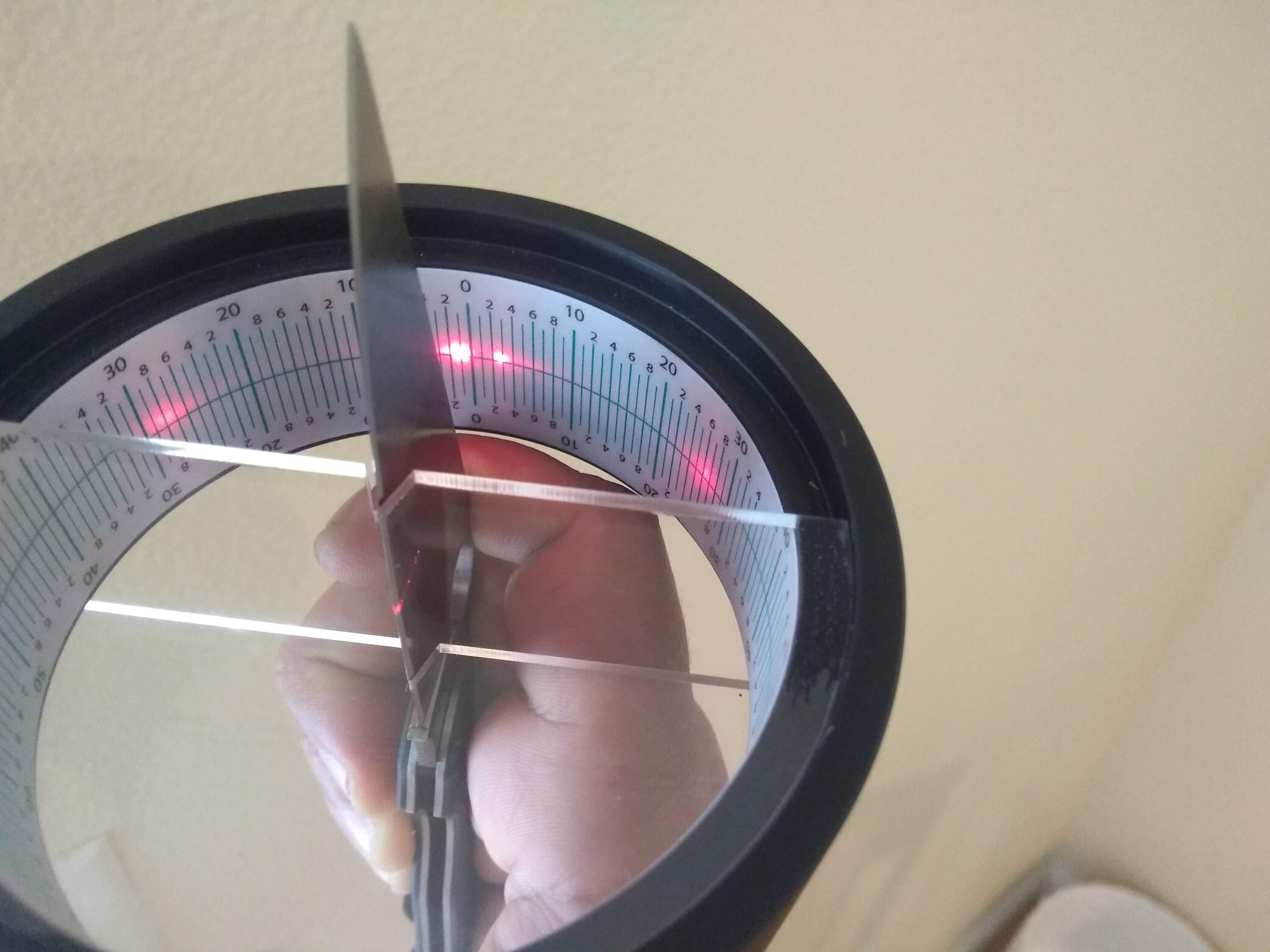 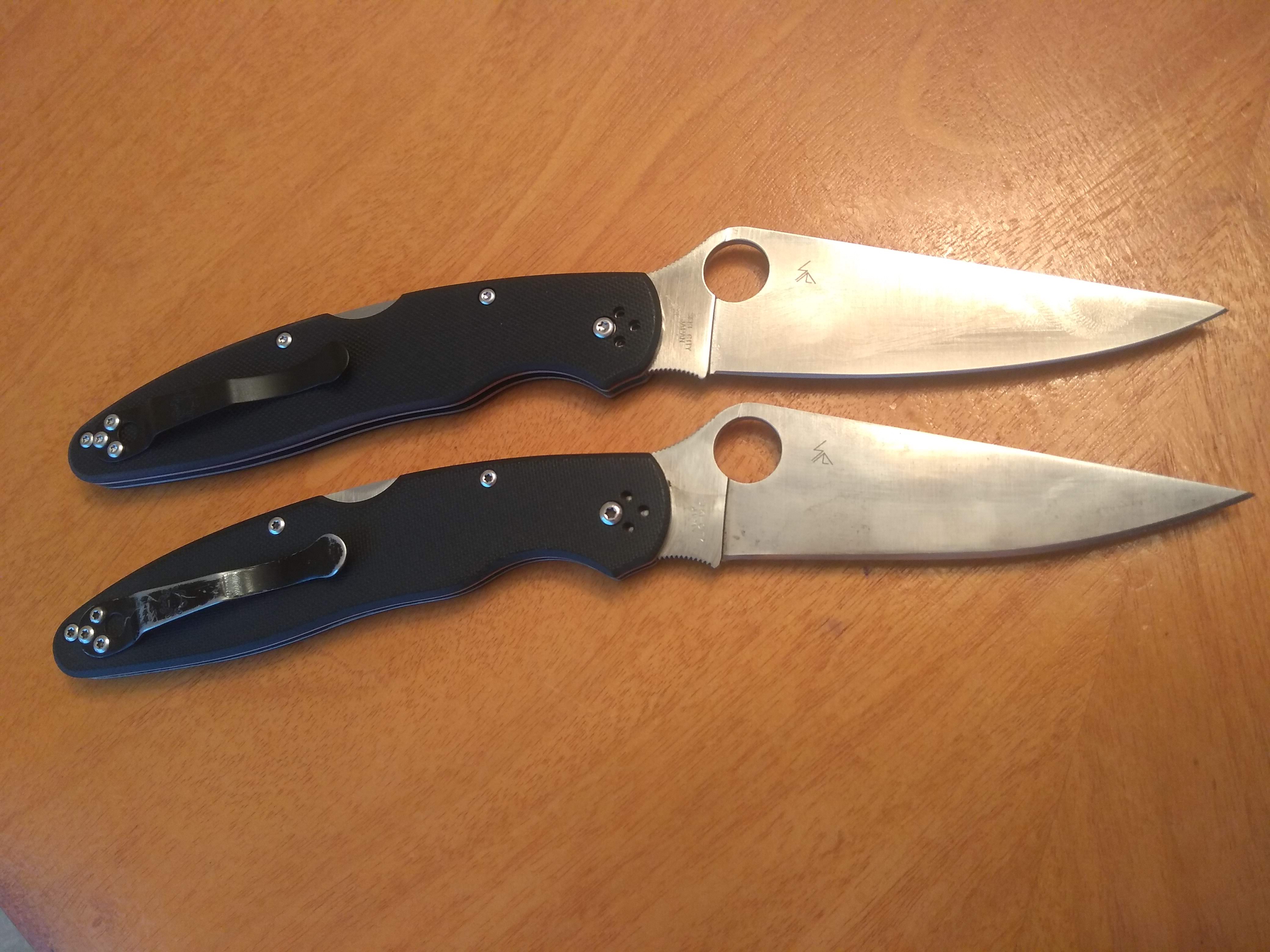 Good stuff, thanks. Surprised at how uneven the grind was. I don't mind bevels being uneven when freehand sharpening. I just keep the angle as consistent as possible and disregard the bevel. I've never had a spyderco show up as uneven as this one did though. Surprising.

Thanks BBB. As someone that only uses his knives for day to day tasks, I appreciate you pushing these knives like you do.

Glad you got your grail. I have this knife and the Para 3 version. Not sure where to go from here.
Top

Pelagic wrote: ↑
Sat Nov 16, 2019 5:44 am
Good stuff, thanks. Surprised at how uneven the grind was. I don't mind bevels being uneven when freehand sharpening. I just keep the angle as consistent as possible and disregard the bevel. I've never had a spyderco show up as uneven as this one did though. Surprising.

It seems most production knives should be kept at 20dps on a system like this to avoid funky looking bevels and there some tricks to even out the bevels aesthetically using slightly different angles on each side.

I've noticed the fixed angle boys complain about this but I never understood because I did not use nor own a good fixed angle system like the edge pro until just recently to play with. I have been curious to see what Jim Ankerson was always talking about and also lots of my customers use this system so I traded a Vanax knife for an edgepro apex to see what this was about.

I wanted to test the edge so I just hammered a 14dps on the blade with a disregard to the aesthetics. If I'm not selling it I personally don't care which feels good when your life revolves around stressing about aesthetics for what you do sell.

I am happy to have this knife and I'mma use it a lot. I could regrind it but I'd rather spend that time and money on work I sell so I can keep doing what I do.
Big Brown Bear
[url]https://www.youtube.com/user/shawnhouston[/ur]
Triple B Handmade Knives
Top

sok wrote: ↑
Sat Nov 16, 2019 7:49 am
Thanks BBB. As someone that only uses his knives for day to day tasks, I appreciate you pushing these knives like you do.

Glad you got your grail. I have this knife and the Para 3 version. Not sure where to go from here.

Nice man, I'd slap a deep carry clip of your choice on that baby. A lynch or MXG.

Yea man,2019 has been the best year to be a spyderco guy. So much good stuff came out that I have been wanting for years. This K390 in a Pm2 and Para 3 was a really nice surprise for 2019.
Big Brown Bear
[url]https://www.youtube.com/user/shawnhouston[/ur]
Triple B Handmade Knives
Top

Do you know the HRC of that PM2?
- Connor

I'll add that later, jcoolg19/Kurt tested one on YouTube to 63rc. I'll test mine when I get the time.
Big Brown Bear
[url]https://www.youtube.com/user/shawnhouston[/ur]
Triple B Handmade Knives
Top

Good stuff. Many thanks. I really like K390 so far but my only knife is an Urban LW.
I Pray Heaven to Bestow The Best of Blessing on THIS HOUSE, and on ALL that shall hereafter Inhabit it. May none but Honest and Wise Men ever rule under This Roof! (John Adams regarding the White House)

Thanks Doc, This is the platform to have it in. Gotta love the flagship models.
Big Brown Bear
[url]https://www.youtube.com/user/shawnhouston[/ur]
Triple B Handmade Knives
Top

Gotta love living in 2019 baby, (63rc too soft on a production knife)
I have not tested mine, with my Rockwell tester, but that's what Kurt got the Pm2 he tested. Kurt has solid practices with astm e18 but there can be a range of a few points hardness between the 1000's of any Production knife made.

We'll see what we see.

Speculation is fun but numbers are better.

I'll compare the hardness when I have the time, no comments until I have all the information from the knives I have.
Big Brown Bear
[url]https://www.youtube.com/user/shawnhouston[/ur]
Triple B Handmade Knives
Top

Between the PM2/para 3 and the police 4 - is there one you prefer ? Does one enhance k390 properties more ? (I guess it doesn't matter if one thinks the police 4 is too big of a knife)
Top

Thanks Shawn,
Just picked up a Maxamet PM2 and the BBS K390 is next! Appreciate the detailed review

You're sure to be ruined for anything less, now.

Wow, I was certainly hoping for close to the same HRC as the police 4. Ultimate performance is key for a steel that will rust if you look at it wrong.

Thank you Shawn. Much appreciated!

As well as excellent Spyderco models in 2019, we’ve been spoilt with a lot of outstanding testing and explanatory material. Thanks for adding to it.

You didn’t happen to take a BESS reading for the factory edge did you? That would be interesting, to start some factory sharpness data comparisons, as per the BTE thickness thread.

Do you get much of a variation range in BESS readings when targeting the same spot on the edge say, three times?

Greatly appreciate your time and effort.