The Life of my lil native

The Life of my lil native

Ok so this is the first time doing this so please bear with me. The life of my lil native. I have not used it rough by any means, but it has been grinded, sanded, soaked, dremeled and a few other things. When I first received my lil native I was happy with it. It felt comfortable in the hand, it was a great size and weight. As I used it however if became apparent that I needed to make a few changes for me. I firstly didn’t care for how squared the edges of the scales were, so I sanded them down and made a decent bevel on the edges, so it was nice and smooth. I started with 800 grit wet but later went to 320 as it was faster. 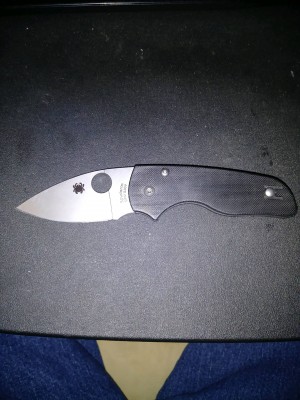 Used it a month or so then I wanted more changes, so I made the groove where your middle finger would go, wider and deeper. It did help with opening it. I also did this with 320 grit wet. I also flat sanded the scale so it was much smoother. While it was apart I sanded the inside edges of the scales too just so it didn’t have anymore sharp edges. When I did buy it the action was a tad gritty so I polished the liners, bronze washers and the tang with 2000 grit sand paper wet. It is like glass. I even tried a new lube, the Benchmade bluelube. It seems to do very well.

I liked those mods so far and it did annoy me that the blade would hit my finger when closing. So out came the Dremel and I sanded down the ricasso so it would not hit my finger, while there I also added a sharpening choil. It made sharpening easier. At this time I did also drop the edge from a 40 degree inclusive to 30 degrees. Looks amazing and it slices so much better now. 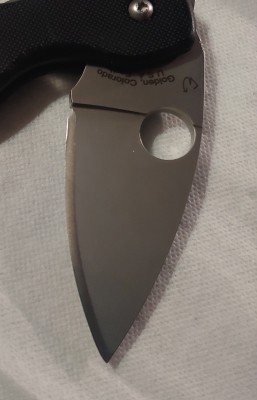 These mods did well for me for another month or so. Well as I was using it a lot more I found that I would turn my knife sideways while cutting and the back binger choil would be in the way. So I went online to see how I could fix this and it came to me while looking at the vrango that I did not even need it there. So once again the Dremel came back out and I ground it down so it sat almost flat across the handle. This mod I did render before I did any cutting.
Render with a line across the scale. 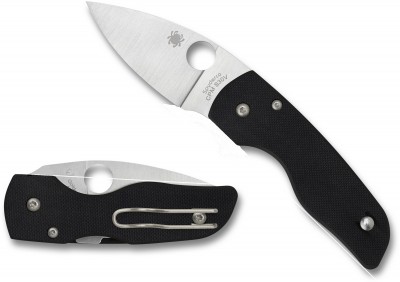 After I did take the finger nub off I fine sanded all the edges with 2000 grit wet so it was even, and looks great.
All Together I Probably have 40 hours into it. If I get another in a sprint it will be easier and faster to get there though.
I like s30v. I did have to use the diamond SM rods to reprofile it.
I have enjoyed the experience and have learned much through it. 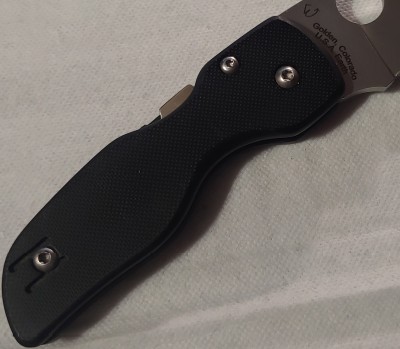 A knife, or any tool for that matter, is so much better once you move in and make it your own. Nice work!
Top

Great work. I think I will not try to flatten the choil like you did because, while it looks great, I prefer the extra margin of safety keeping my finger from sliding onto the blade.
I Pray Heaven to Bestow The Best of Blessing on THIS HOUSE, and on ALL that shall hereafter Inhabit it. May none but Honest and Wise Men ever rule under This Roof! (John Adams regarding the White House)

Nicely done! Someday I'd love to round the edges on my scales and widen the access to the spydie hole as you did.
- Julia

But seriously, nice job. Thanks for sharing, bro. I like mine, but I'll eventually round all the edges and maybe make a ramp in the right side G10 for ease of getting to the hole.
- best wishes, Jazz.
Top

I’ve had similar thoughts of using a compression lock Lil Native to contour the edges to make a Lil Shaman!

the rounded edges made a big difference in how much better it felt. i do have a few more pictures i will upload today when i get time.

Nice job, I do this type of stuff to most of my knives.

I would everything you did except deepening the middle finger groove and sharpening choil. In addition though, I’d remove a bit of the handle belly.
Top

That shape seems so natural I had to look at mine to see the difference lol.
lonerider
"A fool's blade may be sharper than his brain"
“Learn to ride a bicycle. You will not regret it if you live." - Mark Twain
Top

Aw, sweet round edges. I really want to get the courage to take sand paper to many of mine. Those sharp corners on pm2's and a lot of the Golden models have been a turn off lately.
I own an assisted knife and am embarrassed to admit I enjoy it.
Top

Glad to hear others mod their knives.
SCARAMOUCHE!

I did mostly post this for sal and wartstien

Thank you, my friend!

You preannounced to me in another thread you´d do this post, and it turned out to be a real good, interesting and comprehensive one.

I really enjoyed reading it and looking at the pics. Your mods ALL seem to make real sense and to further improve the knife, and if I were into G10 (I prefer FRN though) I´d take some of your mods as examples for what one can do to make a handle even better.

What I totally like is that your mods really show that you´re not "just" a thoughtless, superficial knife user and "knife guy" but have real passion, do really think about knives and have the sovereignty to look further and improve your favorites to your likings and preferences. I think many more people should do this or DARE to do this.

So, thanks again for your write up and the pics!! You know, it´s funny, we are quite different when it comes to preferences concerning locks, size, handle materials... of knives . But I guess we really have the same "passion" for Spydies (sure, like many others on this forum) and that always makes for very interesting and valuable discussions with you.

Enjoy your Lil Native, it is REALLY "YOURS" now!!

Looks like you have evolved the lil native into a lil lum!
https://cdn.brandfolder.io/YLOLU61B/as/ ... th=800/img 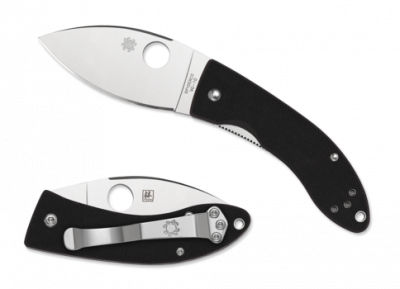