Told my daughter that people are a little bored on the forum and starting games. She said she wanted to count all my spydercos. Fixed blades, kitchen knives, mules, folders, in the car, in the spyderpac, in a drawer, on the desk... all of them.
I said the big question is “is it over 50?”
Wrong spyderholic, it’s officially 88.

So, count them up and share which ones are special and why.

Special is the tufram police that Sal just sent to me as a charity give away and the red Persian, such a cool design.
Top

I counted users, back-ups, retired knives and the ones I'm thinking about trading / selling.

Police 3 that I bought as soon as they came out. Carried off and on for a decade, rotating with my Millies and PM2. Lots of memories attached to it. First dates, job interviews, a few moves, etc.

Aqua Salt PE that Sal sent me for doing something dumb with an Endura. I beat the hell out of it over the years. It's the knife that opened my eyes to the carbon steel level of toughness H1 has, and made me realize rust proof isn't the only amazing quality of this unique steel.

Tasman Salt. This is from the very first run, one of the first ones to be made without a CC number. It was my first H1 knife, first serrated Spyderco, and first hawkbill from any company. It's had a rough life as a pure beater, slicing dirty and heavily abrasive materials I didn't want to subject my nicer knives to.
Current favorites:

i only have seven, which is pretty low for around here, but they are a very selective seven and i only have two hands, so it’s about five more than i need. i have been fortunate enough to have visited the sfo though, so i’ve experienced most of the regularly available knives in hand, which really informed my purchases. nothing in that store could kick the manix out of my pocket except a yojimbo and that’s only because it’s such a cool looking knife.
Top

I have more than two dozen with me. I’m not sure how many in storage.
I Pray Heaven to Bestow The Best of Blessing on THIS HOUSE, and on ALL that shall hereafter Inhabit it. May none but Honest and Wise Men ever rule under This Roof! (John Adams regarding the White House)

They're all special to me in their own way. The S110V PM2 was my first spydie so it holds a special place. But even the ones I've let go are missed.

folders. Another 10-15 in various other manufactures, including several fixed blades. Man, trying to account for them all made my head hurt. And I realize compare to some of you, I ain't go much. I should keep a spreadsheet or something.

In terms of the special ones, I have three and they are all Golden. Steel may vary depending on what is sharp at the moment. 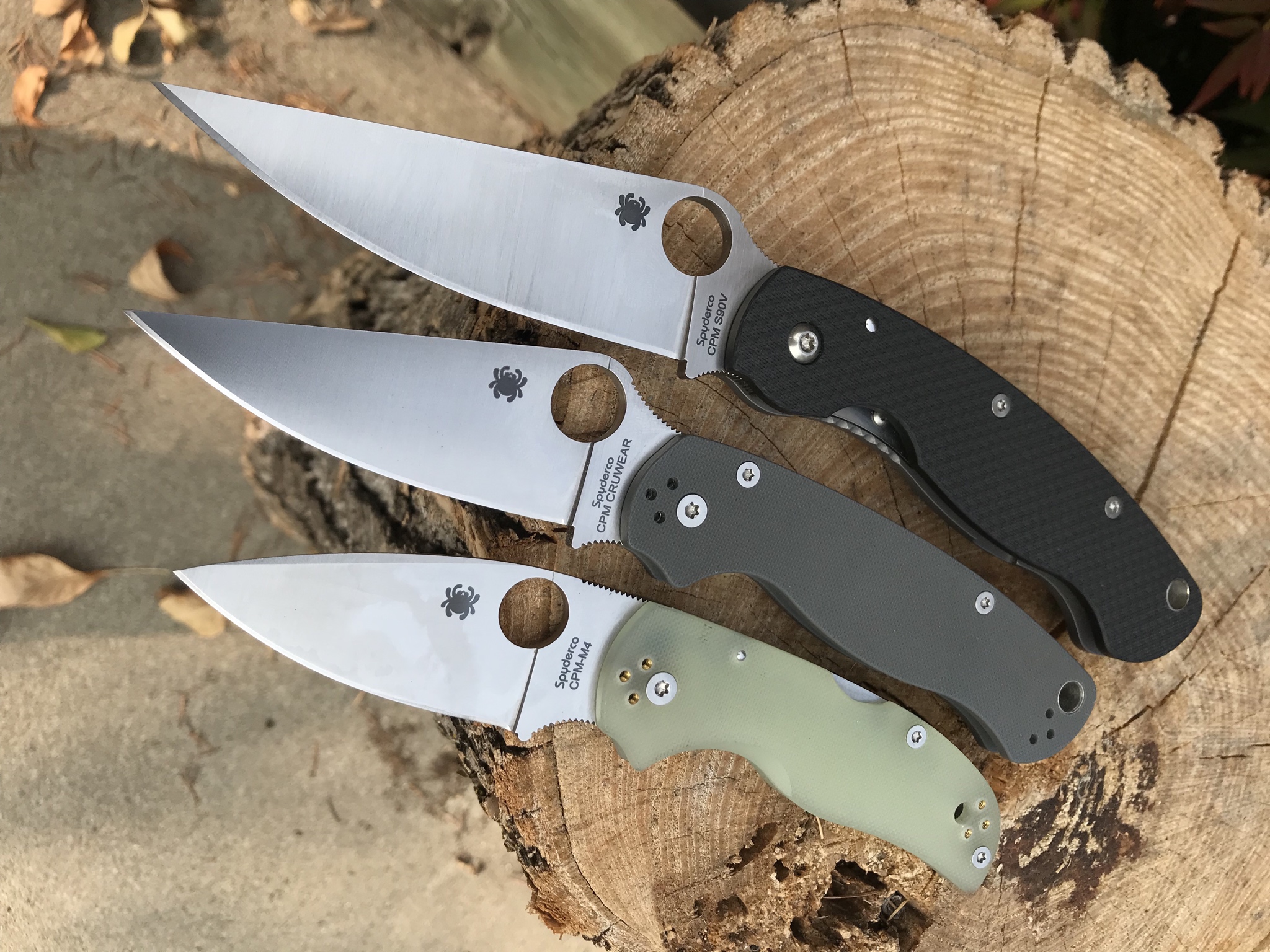 Plain edge folders: Spyder Edge & Combo Edge folders Fixed-blades Twenty-five Spyderco folders (although one of them is a Byrd), three Spyderco fixed-blade knives, twelve steel types. I used to own a Para 3 Lightweight but gifted it to my brother. As for special ones... I like them all, but I am especially fond of my combo edge Natives & Delicas which are mainstays in my work knife rotation & my Dragonflies (my very first Spyderco was a Dragonfly).

Can't count at the moment but I'd say I'm somewhere in the 40s.
SHARPEN IT LIKE YOU LOVE IT, USE IT LIKE YOU HATE IT
~David
Top

I don’t even want to know.
- best wishes, Jazz.
Top

The Fluted Ti Native is very special to me. There is a story behind it that I keep to myself, but is a constant reminder of what I mean to Spyderco, and what they mean to me. It’s the only knife I own that will never ever leave my possession. Well, maybe the wolfspyder too.

Deliberately try to limit the Spydies I have at any given point in time to "around ten" (One of those I have currently was a gift). So I have to sell some from time to time of course.

9 of them lockbacks, 9 of them FRN, 8 of them belonging to the "Endura family" (if you count the Stretch as a "member").

Ah, yes, plus only ONE quality folder anymore that is NOT a Spyderco...

My favorites are my ZDP-189 Delica, carbon fiber Positron, and serrated Endura. Each of the Lady/Manbugs is on a 1 1/4" split-ring key-ring along with my two door keys. The two keys and large split-ring serve as a lanyard of sorts and greatly enhance my grip when using the little knives (If needed,I'll slide my little finger into the ring). If I'm away from home I'll have my house keys which means I'll also have a knife.
Top

I've only discovered Spyderco for a little over a year now and went a little crazy once the BITE sunk in! A quick count I totaled 31

Mules have bit me the hardest and probably have enjoyed them more than the folders.

Blurple S110V
Rex 45
DLT M390 (One for me one for my son he just left for school,WKU Red, but he though it was too big to carry around campus so I sold his)

Most days the BBS para3 is in my pocket and is my most carried knife, the blue is perfect for a Dodger and WIldcats fan. Gifted family over 25 Byrds and a few Spydies over last Christmas, so to think I've purchased over 50 knives in a year is a little worrisome....at least from my wife's pov, I'm fine with it

I currently have 9 but I'm sure that number will increase by next year.
Top

"Only" 31 Spydies. But that's about a third of my collection, which now includes 40 different steels. Good grief.
- Mark

I have 20 different steels among my 31 unique Spyderco models. I've had around 60

total so far, and I've been trying to cut back recently.