The new Z-Cut kitchen knife series from Spyderco is unique in several ways. They come in four colors: red, yellow, black, and green. Three edges: PlainEdge, SpyderEdge, and fully serrated. Two blade shapes: pointed and blunt. And most importantly are flat ground from very thin stock. At 0.030” on the spine, they are 40% thinner than the average ‘thin’ paring/utility knife. The reduced resistance found in these blade’s profound thinness allows the edge to glide through whatever it is called upon in the kitchen, making cutting effortless and appearance supreme. 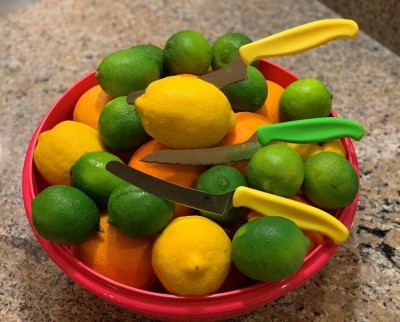 Over a month ago, I received three of the four Z-Cut designs from Frank Dailey at Spyderco and since then have put them to work. I have been using a large kitchen knife made from Carpenter CTS BD1N for over three years, so I had a good idea of what to expect. In my opinion, BD1N may be the best overall steel for kitchen and butcher knives. It takes and holds a beautiful edge, does not tarnish or rust easily―even in the dishwasher, and preforms very well in the rough and tough world of most kitchens where the average user is not a steel fanatic or one who hand sharpens to 10° per side on an 8000 grit waterstone. Most users do cringe worthy things to their kitchen knives and based upon my 43+ years of experience selling and professionally sharpening knives in our cutlery store, the average kitchen knife is used and abused far more than most EDC folders. In testing the Z-Cuts, I did all the seemingly unthinkable torture tests that we always council against like cutting on hard, edge destroying surfaces (granite, Corian, glass, and stainless steel), washing in the abrasive and corrosive dishwasher, and cutting into bones and fruit pits. In addition, I sliced and diced pounds of fruits and vegetables during the preparation of meals. I also boned a leg of lamb and multiple pounds of chicken thighs, trimmed steaks, chunked chicken tenders for Pad Thai, and sliced numerous rolls, bagels, baguettes, and sandwiches. After much use and abuse, when their razor edges began to fade, a minimal touch-up, just light strokes @15° on the fine rods of the Sharpmaker was all that was necessary to bring their edges back to shaving sharpness. 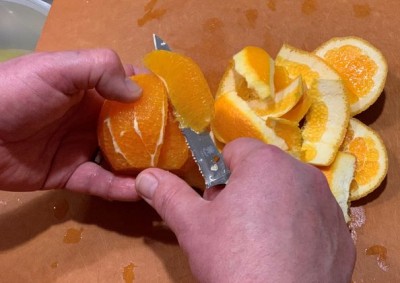 The ‘Z’ shaped offset design gives you the ability to hold the handle above the cutting board for knuckle clearance while providing a comfortable grip. The offset also allows your first finger to choke-up on the handle which turns this EKU (Everyday Kitchen Utility) into a paring knife for peeling and trimming fruits and vegetables. I also used the round tip models for spreading mayonnaise, butter, mustard, and cream cheese. These knives allow you to finish cutting a pizza and then breakdown the box all with the same knife. 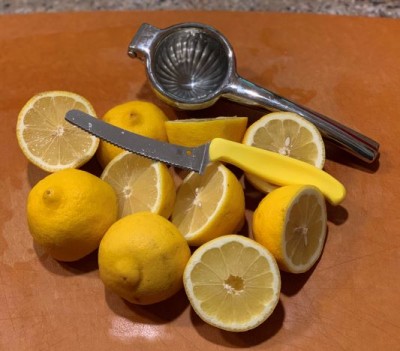 Beyond basic food prep, the Z-Cuts make great informal steak knives for slicing grilled rib eyes, prime rib, pork chops, etc., like scalpels. I can also envision their use for slicing raw fish for sushi and sashimi, and then precisely slicing those sushi rolls into perfect sections. Z-Cuts will also make an excellent bar knife for cutting all those cocktail garnishes. 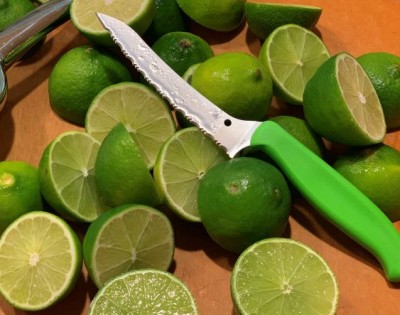 While the versatile Z-Cuts are capable of most everyday kitchen tasks, I don’t see them replacing special purpose knives like those designed specifically for boning, filleting, large loaf bread slicing, or roast meat carving. They will, however, easily become a kitchen favorite―that “Go-to” knife that rarely leaves the cutting board. If anything, Spyderco’s Z-Cuts may be the new ‘Ginsu’ knife that actually live up to the promise of superior multi-purpose performance and lasting quality that the originals never achieved.
Top

Very good review. I will certainly try every version. I believe they will be very versatile. The blunt tip for spreading, the pointy one for piercing, the serrations for bread and the plain for all other stuff.
I am looking forward to these.

All of a sudden i have an appetite for lime and lemons...now where is my Z-cut...
Top

I was making a Citrus (Lime, Lemon, Orange, and Grapefruit) Ceviche on Sunday for my wife's birthday when my daughter snapped the photos.

I am all over two of these!
-Darby

Thanks for this Brian. I'm in for a couple of these too. My girl loves her Spyderco kitchen knives and I'm sure she'll be thrilled with these as well.
Of all the things I've lost I miss my mind the most!
Top

Can’t wait. I’m going to buy at least half a dozen (a few as gifts).
Love my Spyderco kitchen knives!
Top

I have a hard time believing Spyderco is shipping a knife that thin, especially to kitchen users.
Top

Are they already available?
Top

They are not shipping yet. Still working on packaging. They are made in Golden.

Ok. That's fair. Is it ok to ask where they'll be available upon release? Would we be able to get them from the usual dealers or will they be directly from the factory outlet?
Top

They will be available through general distribution.

They sound great, Brian, thanks for an excellent review. Can't wait for them to hit the shelves.
Paul
My Personal Website ---- Beginners Guide to Spyderco Collecting ---- Spydiewiki
Deplorable

I have a hard time believing Spyderco is shipping a knife that thin, especially to kitchen users.

I'm in for a pointy tip. Not sure if I'll go with serrated or plain.
Top

I'm in for a few as well, hopefully we see these soon.
Top

I am looking forward to these. It seems they fix several issues I had with the previous knives.
I Pray Heaven to Bestow The Best of Blessing on THIS HOUSE, and on ALL that shall hereafter Inhabit it. May none but Honest and Wise Men ever rule under This Roof! (John Adams regarding the White House)

Oh these look great!! I might just be retiring my K-04 & K-05 models when these are finally released. I love the ergonomics of the handles. I just hope that they have similar serration patterns as the older kitchen models had.

I would love to see what a fillet knife would look like in this style.
Top
Post Reply
50 posts