i was one of the people impatiently awaiting the native salt, so i feel it’s only right that i make a post about it now that it’s available and i have one in my hands. 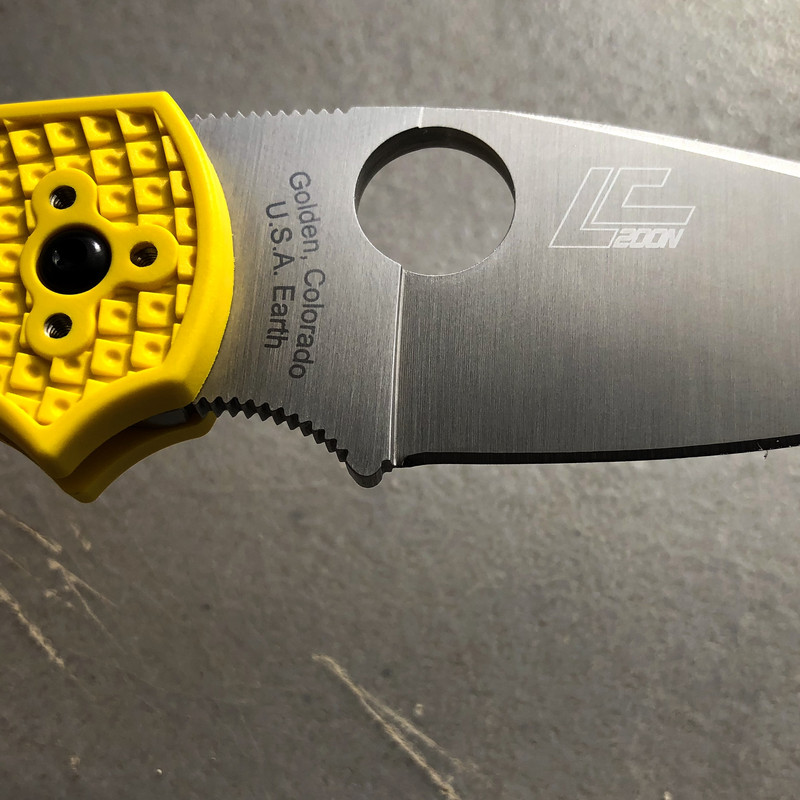 this knife is a thing of beauty. it’s also one of the sharpest edges i’ve ever seen from a factory. golden hit this one out of the park. i’ve not done any real testing with it since i just got it yesterday, but i’ve opened a few packages with it and this edge is no joke. 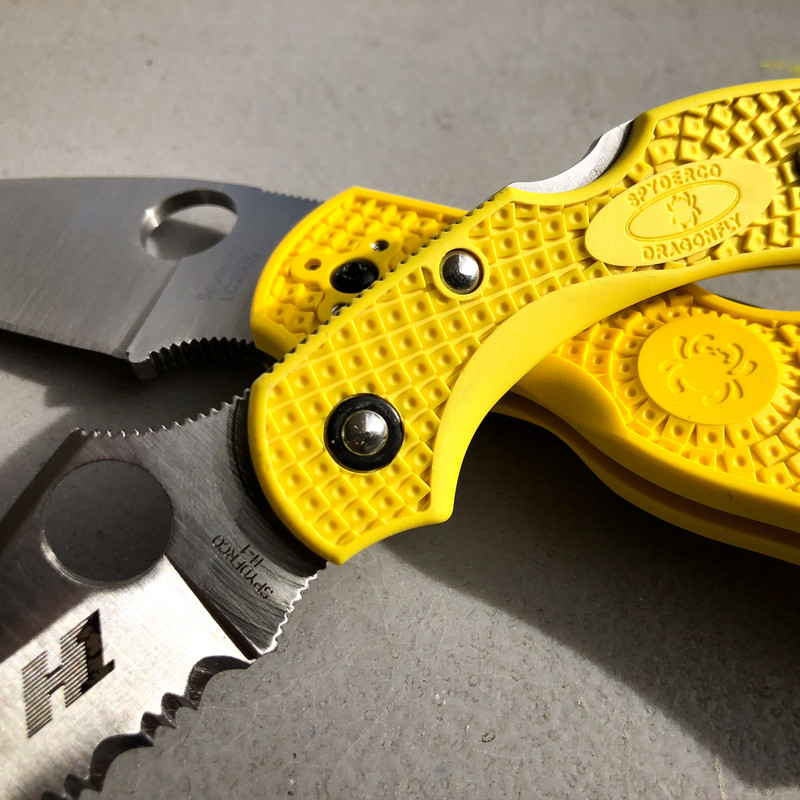 the yellow is still not my first choice (and i’d love to see this knife in all black), but this one does have a slightly warmer yellow than the seki salt models and that’s nice. hopefully you can tell from the picture it almost has more of an orange to it instead of being a pale yellow. i may end up dyeing it, but i’ll hold off on that decision for a while since the yellow really doesn’t bother me at all. 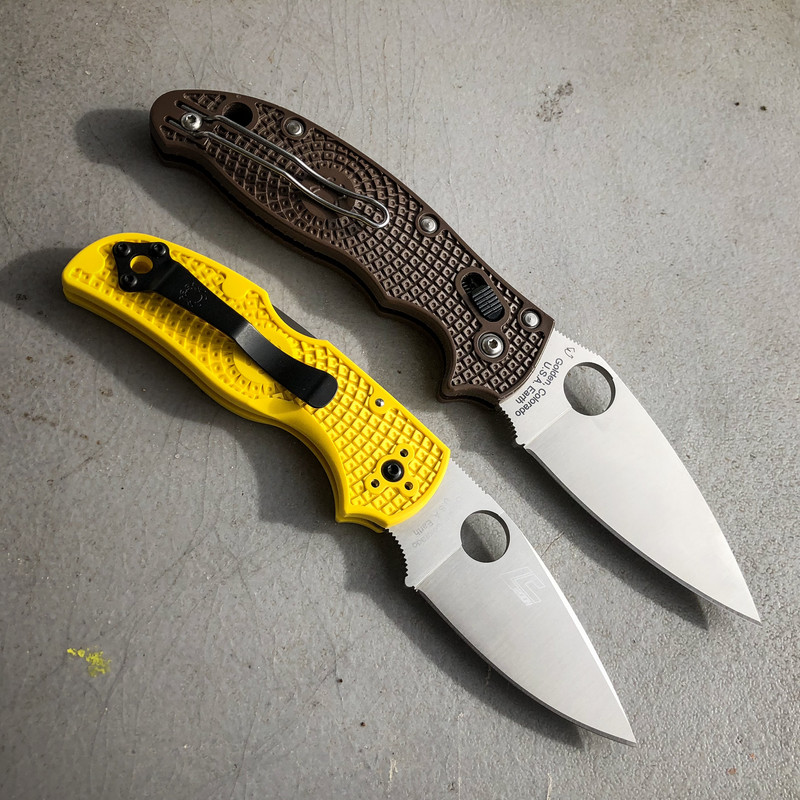 as for the native itself, it probably won’t replace my manix as my favorite knife, but it’s just as ergonomic for when i can’t carry the manix due to size restrictions. as i’ve said in the past, i’m not sure what people are looking for in a “mini manix” that’s not offered by the native. you can see the similarities in the picture. it feels just as comfortable and almost identical in hand despite its differences. i can even get all four fingers around the grip behind the choil (i wear a large glove), which i wasn’t sure i’d be able to do based on reviews. it also has a leaf shaped blade. it’s basically a mini mini manix (that’s for you, vivi) already. 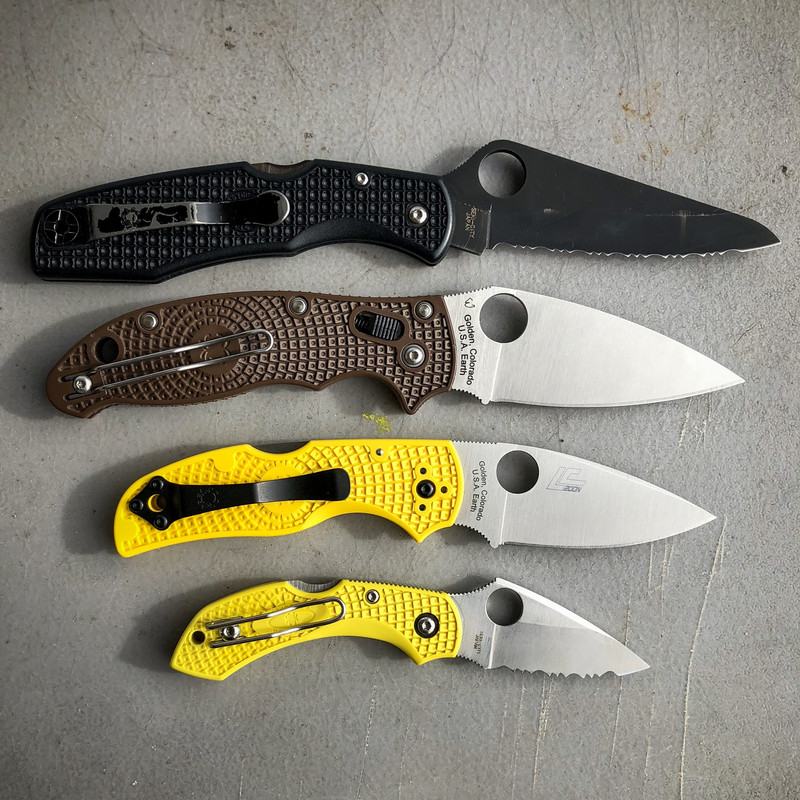 here are the knives i’ve been carrying since i got the native yesterday morning for comparison purposes. the pacific salt and manix 2 are my typical edc pair. i will still carry my pacific salt when i’m in the ocean for the extra length and serrations, but the native may end up being my new running knife and could easily end up replacing the pair for edc some days.
overall, the native is an excellent knife and i’m really looking forward to putting the salt through it’s paces. it’s the perfect companion to my manix when i need a slightly smaller blade (mostly for work) and it feels just as great in hand. if you are on the fence about this one, i don’t think you can go wrong with it.
Top

Awesome looking knife! Really wish they’d gone with the wire clip, but I can deal. Waiting to see what ‘Santa’ brings me tomorrow morning before I pick one up.
Spydiechef, Dragonfly Salt 2, Native 5 Salt, Native 5 Cruwear, and Q-ball (Newest Addition)
Top

one thing i forgot to mention about ergonomics... the native and manix both have clips where the bump that rests against the handle is lined up perfectly with the inside of a knuckle in either grip position. that’s a level of detail that most makers don’t consider and i appreciate it. i’ll have to post some images of what i’m describing. either here or a future thread on ergos.
Top

Very good gold. Is it made in Golden?
Top

Yes look at the first photo
I can do all things through Christ who strengthens me. Philippians 4:13
Adam
Top

Oh neat, thank you, I just looked at it. Very cool.
Top

I just love the yellow. Might get one, even though I’m a fan of the hump. These new Natives are very well made. I have a black SE and 110 V. Sal, why do you do this to me?
- best wishes, Jazz.
Top

How durable and powerful a cutting tool do you think this Native Salt is, do you think it can stand up to the toughest most rigorous use, even outdoor survival?
Top

it should be fine for anything you should use a folding knife for. it's a folding knife. it's not a fixed blade, a pry bar, a screwdriver, a hatchet, a helicopter, a life raft, a rescue beacon, etc. it's not the most durable pocket knife i have, but it's plenty good at being a knife.
Top

How durable and powerful a cutting tool do you think this Native Salt is, do you think it can stand up to the toughest most rigorous use, even outdoor survival?


Only way to find out is to test it and beat it up a bit. I'm not going to, but I'd trust the knife to last, besides batoning or crazy prying.
- best wishes, Jazz.
Top

The yellow is an interesting shade. I think Crayola had a shade like that in the big box. Very nice knife. Even though the Native 5 is not my favorite model because of my hand size, I plan to get one of these as soon as I recover from Christmas.
I Pray Heaven to Bestow The Best of Blessing on THIS HOUSE, and on ALL that shall hereafter Inhabit it. May none but Honest and Wise Men ever rule under This Roof! (John Adams regarding the White House)

okay... time for some full disclosure/updates/questions.

i received the native salt on the 23rd and have done nothing but play with it (opening and closing it) and using it for some light duty package opening on Christmas.

someone asked about how durable the steel is when it comes to scratching compared to h1. from what i can see, it's much better than h1 in this regard. i do see some very minor scratches if the light hits the blade just right. i'm guessing this comes from plastic blister packaging, which is the hardest material i cut. personally, i don't really care since this is definitely a user knife.

the only slight concern i have is that i'm noticing some lateral blade play. i don't remember this being present when i first got the knife and started playing around with it, but it's definitely there now. it seems like maybe the pivot loosened or something because the blade will slide a little from side to side and there is a small clicking sound. is this a normal native 5 thing?

this is not anything catastrophic or anything. i still have no doubt this knife is strong enough to use and i don't feel like the lock will fail. i'm just noting that there is some play after what i consider very minor edc use. i didn't break down a bunch of boxes, cut into anything strong, or even put lateral pressure on it. i just opened Christmas presents and opened and closed it at most a couple hundred times.
Top

I would be concerned over lateral blade play on such a knife as it is not normal. Check the pivot and the handle screws (likely). If all is right with these, I might consider having the knife evaluated.
I Pray Heaven to Bestow The Best of Blessing on THIS HOUSE, and on ALL that shall hereafter Inhabit it. May none but Honest and Wise Men ever rule under This Roof! (John Adams regarding the White House) 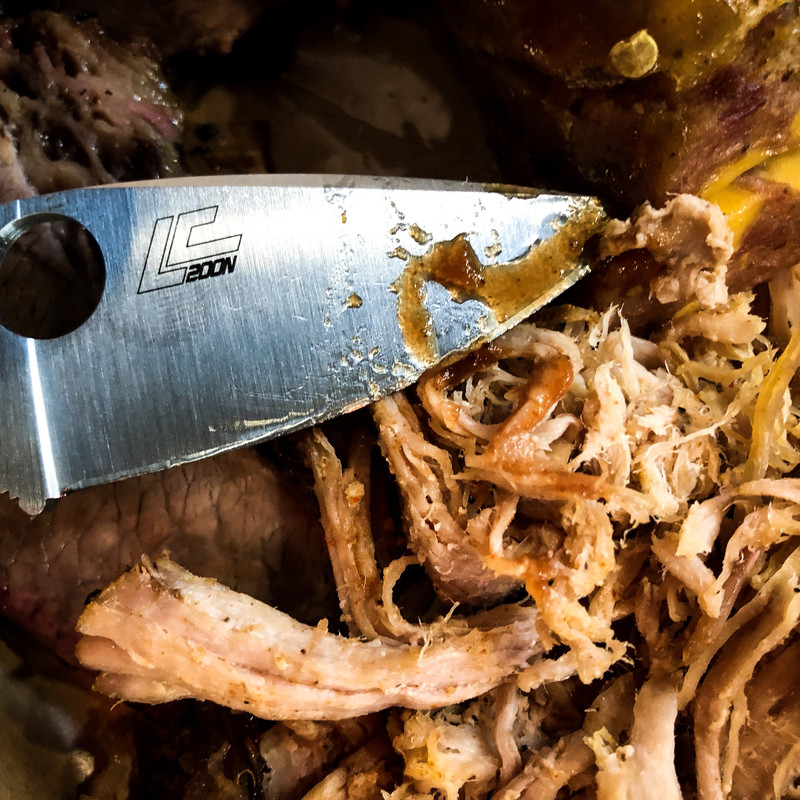 Doc Dan wrote: ↑
Wed Dec 26, 2018 9:32 pm
I would be concerned over lateral blade play on such a knife as it is not normal. Check the pivot and the handle screws (likely). If all is right with these, I might consider having the knife evaluated.

i tried tightening the pivot. it felt like it made a difference at first, but it didn’t. i didn’t crank down on it hard or anything. it’s already tight. it almost feels like the blade is able to move back and forth on the pivot just a tiny amount. i can feel it click back and forth as i move it.
Top

Probably a stupid question, but did you have a screwdriver on both sides when tightening, seeing as how it’s a two sided screw/bolt?
- best wishes, Jazz.
Top

not a stupid question. i actually didn’t, but i had my finger on the opposing side and it wasn’t free spinning. if it had, i would’ve locked the other side down.
Top

The pivot on the backside is actually a hexagon shape where it fits into the frn so it won’t turn. No need for a second screwdriver.
Top

Good grief, now I have a PE in the mail! Thanks a lot for the enabling.
- best wishes, Jazz.
Top

i’m sure you’ll enjoy it. i’ve been enjoying mine.