Well, I guess I'll offset a little of the recent H1 and DLC praise with a slight reality check. No steel is immune to edge damage, and H1 is no exception. Despite recent reports of 180 degree bent tips and such, it will still chip and roll under the right circumstances.

And, it seems those circumstances would be cutting through two strands of coax cable at once. I didn't realize how much metal core there actually was in this stuff until it was too late. It also took a few good rips/sawing motions to get completely through it but by then the damage was done. 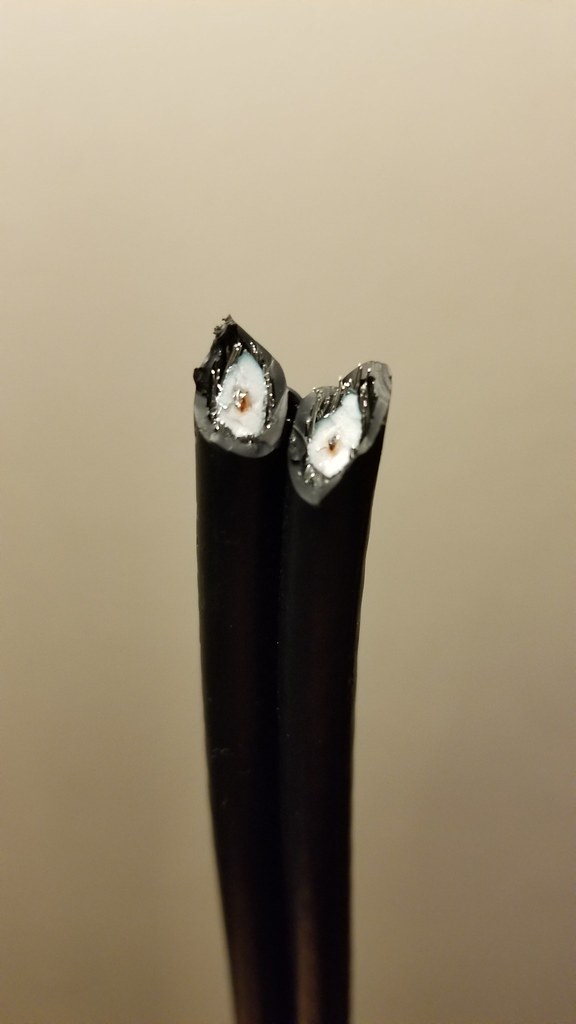 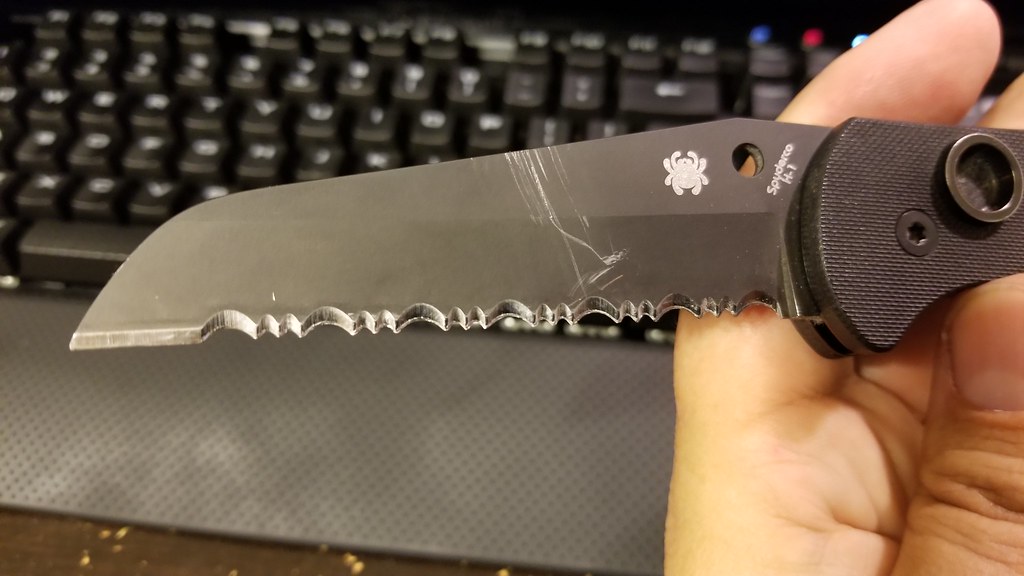 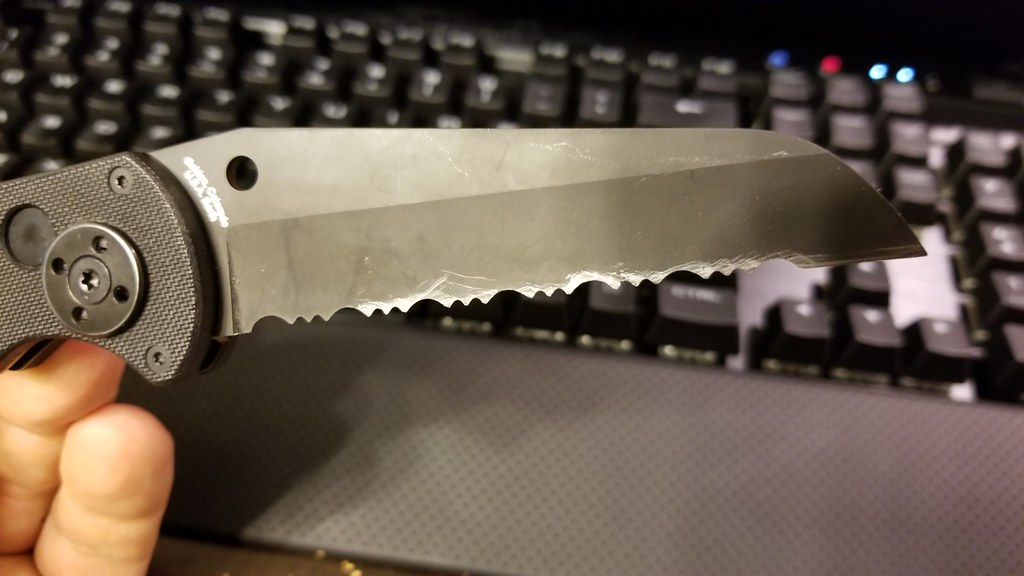 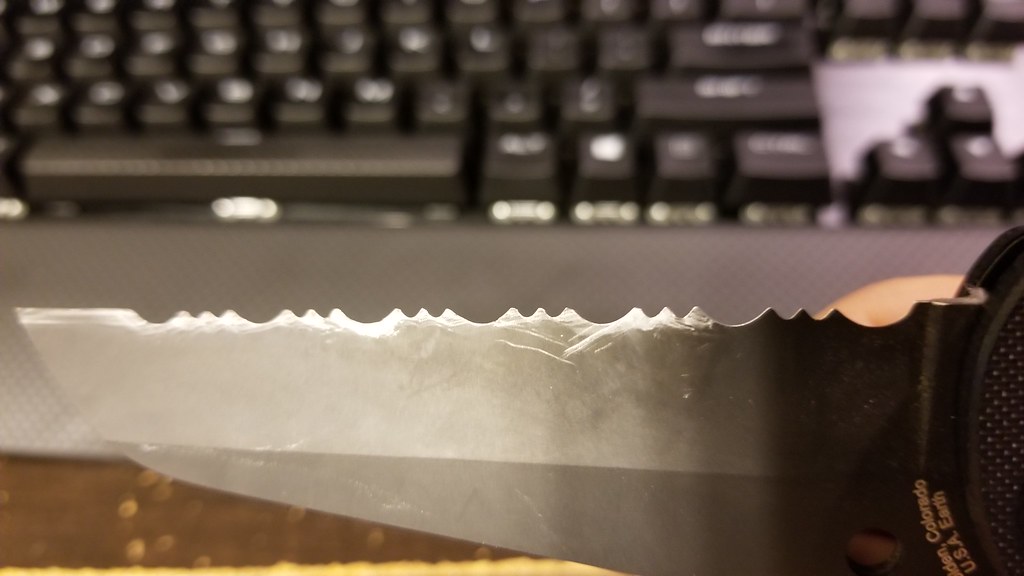 I've started back on the brown rods to try to smooth out those teeth, but you can see several of them are actually chipped off. This was the biggest surprise of all of this, I expected them to roll before actually chipping but there's actually only one tooth that's rolled and it's towards the tip of the blade. This isn't the end of the world for me, since I prefer the teeth to be more rounded than pointy, but the chipping was definitely a surprise. This also was far from being a factory edge and has been sharpened a whole lot of times, as is evident by the visible not-so-micro bevel. I can also assure you there was no burr or anything like that to cause the chips.

As for DLC, it's a pretty amazing coating but it too is not impervious to scratches. What you will see a lot of times are rub marks from other materials and even other metals, and these marks can often be polished off with some Flitz. I was able to get most of what looked like horrible scratches removed, but what you see left are actual scratches down to the metal. There is one scratch on the front side that has a gold hue to it that seems more like a metal transfer but for the life of me I can't get it to polish off. 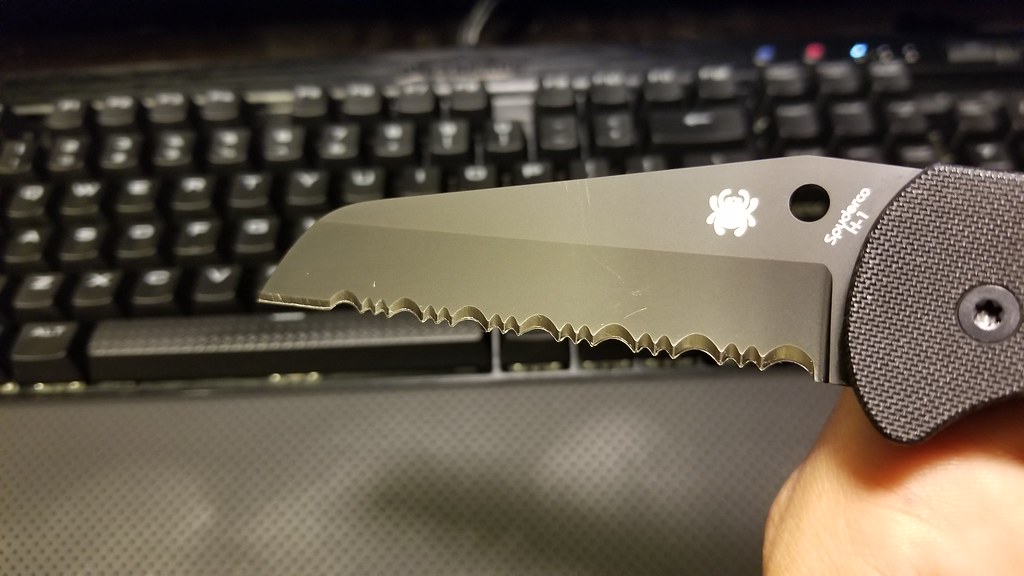 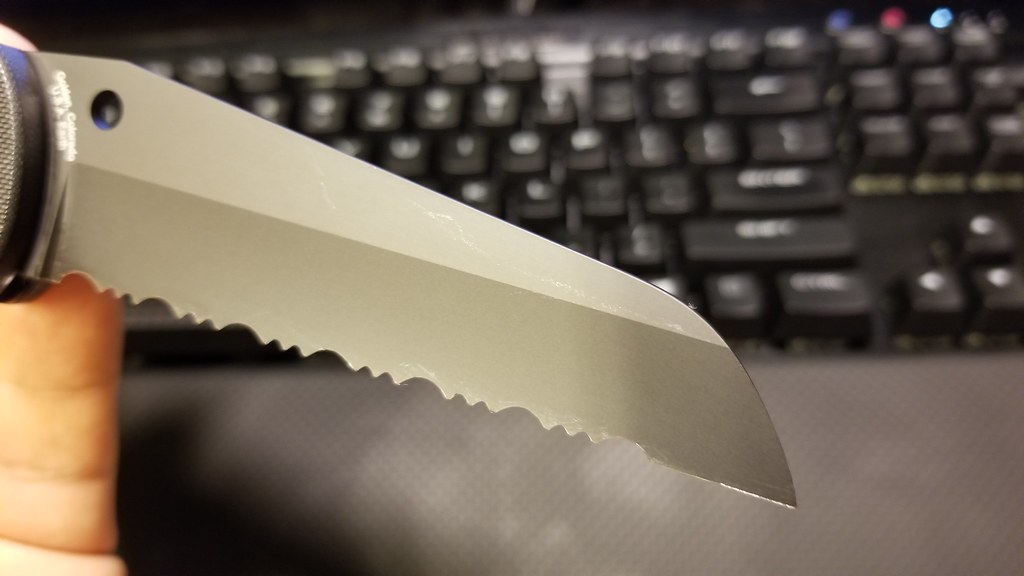 I believe some of these ^^^ at the top flat part of the blade were actually there before this ordeal and I think they're from pocket change, but that's the best I could get them to polish away. That said, it's amazing how much of what looked like horrible scratches were in fact just transfer marks and they polished off. DLC is no joke. I'm fairly sure DLC is actually harder than the H1 underneath it. I would still expect it to scratch from other abuses like cutting up steel cans or any brushes with rocks or stuff that you really shouldn't be using a knife on anyway.


For anyone interested, here's a breakdown of what's inside a coax cable. That center core is solid copper.

I suppose another way to look at this is that H1 is in fact quite tough, since one has to wonder how other steels would have performed in the same situation. I'm still more surprised to see chips than rolled teeth though.
How you carry yourself is just as important as what you carry.
~David
Top

Very interesting David. That coaxial cable looks like nasty stuff though. Not surprised there is some edge damage, but yeah that chipping sure doesn't seem what you'd expect from H-1.

When I first got my Pacific Salt, I used it to chop (literally) through some thick plastic straps. Idiot move.

I didn't notice till I got home, but there was some very bad rolling from that. Took a long time on the Sharpmaker to fix it up. Lesson learned - cut, don't chop.

Yeah that last line of the original post came to be just as I was about to submit this thread. This may have been a whole lot worse with VG10 or S30V.

Come to think of it I do have other SE knives in both those steels. The only question is, how much edge damage do I feel like fixing? Lol
How you carry yourself is just as important as what you carry.
~David
Top

I don’t know if this is a steel issue so much as a geometry issue. I’ve got flush cut nippers that go thru copper like nothing. They’re normal probably medium carbon steel, but they’re shaped for cutting metal. The serrations in particular I think focus too much force on tiny points. Nippers, cable cutters, etc don’t have those high points, so they spread the load better.
Top

C'mon David! Take one for the team!I know I'd be interested in seeing how SE VG10 & S30V would fare compared to H1. I bet others would too.

Do you guys remember seeing this blade? This has always stuck with me (btw not my knife or pics) 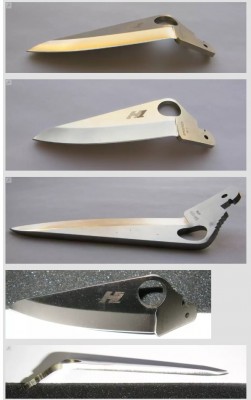 Trimming some profiled polycarbonate sheeting did for the serrations on my old gin-1 CE UKPK in much the same manner. In hindsight not surprising as what makes the serrations so aggressive also means that their edges are relatively unsupported by adjacent metal.
Top

interesting. perhaps the work-hardening result of grinding serrations in it made it brittle?
Top

Thanks for sharing D. Sorry about your knife. It’s not what I’d have expected as I’ve rolled and crushed a H1 SE edge but never chipped it.

I don’t rightly know but I’d speculate the braided shield is stainless (?) and I’d be inclined to think perhaps it did the damage by snagging the tips of the teeth rather than the softer copper core but I’m only guessing.

There was a thread not too long ago about someone cutting bamboo with SE H-1. It was the worst case of rolled teeth I ever saw, but I don't think there was any chipping.

^If that is the case Bloke that would help explain it.
- Connor

Well I went out and checked the trash this morning to get that coax back but someone rummaged through it last night and took it. I guess enjoy your cut up cable whoever you are.

I probably have some more somewhere but I would have liked to do any testing with the exact same cable.
How you carry yourself is just as important as what you carry.
~David
Top

I had a similar experience with my df2 hb. I was cutting through some rubber EMI gasket with a pull cut forgetting the stainless cable that runs through it. The hawkbill ripped right through it until it reached the top cable and I realized what I just did. I put my head down muttered bonehead to myself and went to the garage to get some side cutters to finish the job. I tried with the SM to clean up the blade and work it back to shape but never could get it back to factory edge. Long story short I sent it back to Golden to let the pro's work it out.
-Larry
Hebrews 13:6 So we may boldly say: “The Lord is my helper; I will not fear. What can man do to me?”
Top

I dropped my SE ARK and managed to beat the odds by having it land edge first on concrete. Two of the teeth suffered damage through plastic deformation that left them looking very similar to the damaged teeth on your knife.
Top

Well I'm working on it but man those points were seriously jacked up. This is even after quite a bit of work on the brown rods. I may have to get out the diamond rod and reshape them a bit.

This group suffered the worst of it. 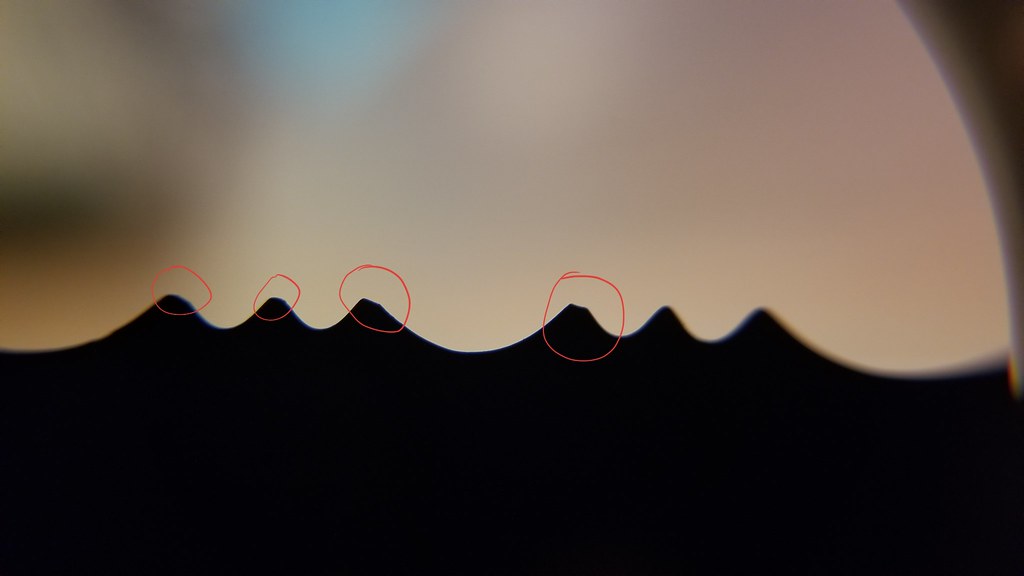 This set is more towards the tip but the one to the left was the only one that actually rolled instead of chipping and it basically honed off instead of bending back to a point. I suspect it more or less broke off. 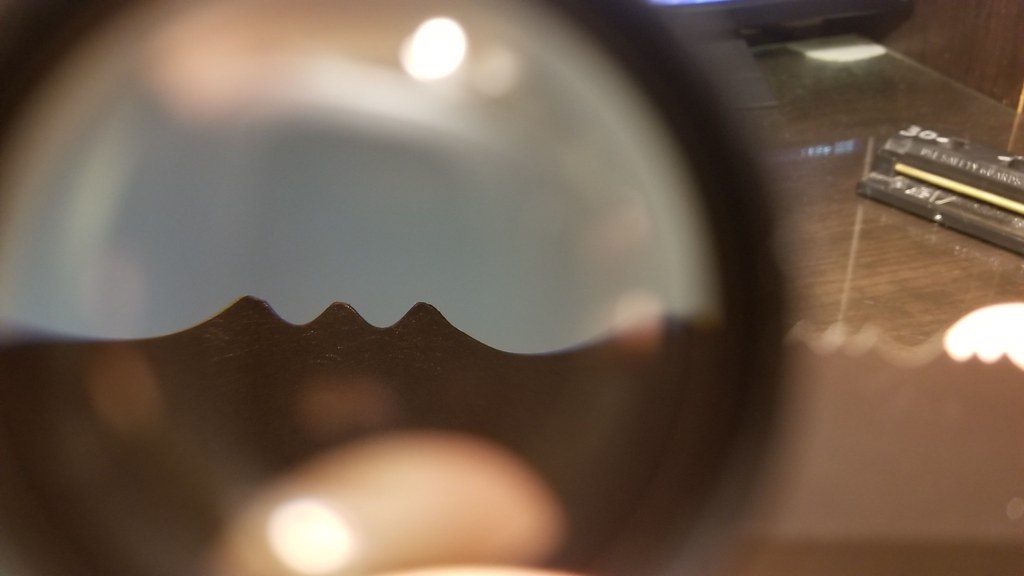 How you carry yourself is just as important as what you carry.
~David
Top

I would use a pair of appropriate pliers for cutting that, not a knife.
Top

Hindsight is always 20/20 ain't it?
How you carry yourself is just as important as what you carry.
~David
Top

I agree that the mesh looks to be stainless in the one you cut. Perhaps it snagged and snapped off the edges of the teeth as they bent. I am a little surprised but not astounded. That cable is pretty tough stuff.
I Pray Heaven to Bestow The Best of Blessing on THIS HOUSE, and on ALL that shall hereafter Inhabit it. May none but Honest and Wise Men ever rule under This Roof! (John Adams regarding the White House)

Whenever these threads come up, I always forget to post: ”inb4 someone says ‘you should use the right tool blah blah’” even though the OP is taking full responsibility and is fully aware that their are specialized tools available to handle the task in question.

Perhaps it’s interesting to some people to hear an anecdote about how a knife handled a particular task that was close to the margins of where you might consider using a knife?
Top

I honestly didn't expect it. I've cut so many wires without any issues like this, but I guess coax is a different animal and like I said I just didn't really think about what was inside the wire before I went for it. I didn't think much more than wether or not it was electrical or not. I live in a 50 year old house and for some reason that line was run from my attic and into my bedroom closet. I was cleaning out some clothes I never wear to donate and I decided it was time to get rid of the wire. Sure I've got the right tool for the job but in most cases a wire is not a big deal for a pocket knife, as long as it's not coax lol.
How you carry yourself is just as important as what you carry.
~David
Top

It helps if you can cut the wire on a hard surface, like a cutting board. Less chance for damage that way.
Join us at the Spyderco Swap!