Still offering my two digital tickets for free to anyone who wants to go on Saturday. I will be a home owner tomorrow and can’t make it!
Josh
Top

murphjd25 wrote: ↑
Thu Oct 04, 2018 10:17 pm
Still offering my two digital tickets for free to anyone who wants to go on Saturday. I will be a home owner tomorrow and can’t make it!

Wish I could be there. Have fun all!

Josh, congrats on being a new homeowner! And thanks for the generous offer - wish I could take you up on it.
- Connor

Starting to make my way down there, doing some breathing exercises so I don’t pass out when I get through the door!

Looking forward to seeing folks I know and folks going that I’ve never met. I have my Radioactive Spyder tag on, so you can’t miss me!
It's better to be good than evil, but one achieves goodness at a terrific cost. ––– Stephen King
Top

Michael Janich is there though which is Awesome.
Big Brown Bear
[url]https://www.youtube.com/user/shawnhouston[/ur]
Triple B Handmade Knives
Top

My flight got delayed so I'll be there around noon. Hope I still have enough time to see everything!
Top

I’ll try to take more pics today LC. The venue is not all that large, and folks can pretty easily cover everything in a few hours. Some of the rarer offerings (from vendors that had any) were likely picked up yesterday. As mentioned, the Spyderco booth was nice but filled only with released models, no prototypes or upcoming releases were on display (unlike the OKCA show). It was really great to meet Michael Janich (a very firm handshake as you can imagine!). The other fellow there seemed kind of grumpy to me though, mostly helpful but not the same kind of cheerful outgoing manner that many other Spyderco folks I’ve met seem to have. They have some fun stickers, catalogs, and bags available but no knives for sale. I’m headed back down sometime this morning so I’ll do my best to take more pics!

A big thanks to Michael Janich for signing my Janisong box!

*To be clear, the knife was not purchased at the show. I've had it for quite some time.*
Time for another

Nice! I got to handle one of those in Taiwan. They're really cool.
Top

I had a great time at the show. I got to meet Michael Janich and Ed Schempp. Michael Janich was very friendly and helped put me at ease (I was kind of in awe and starstruck being in the presence of makers and designers who are practically legends to me

). And Ed Schempp was very humble and gave me some feedback on a design idea I'm kicking around. I had great conversations with both of them at the Spyderco booth. It was really good to put faces to names and get to meet some of the people and get a feel in person of the culture and mindset that I think really makes Spyderco a very special knife company.
Top

*To be clear, the knife was not purchased at the show. I've had it for quite some time.*

The show was great! It was not jammed full of people like ATL which made it much easier to have one on one conversations with the makers and fellow knife enthusiasts. The city itself........interesting. I’ve never been out west but living close to Chicago I didn’t think it would be much different. Man was I wrong. Total culture shock. It was nice to see Paul from the forum , Michael, Ed and all the other Spyderco fans. Food was SPECTACULAR!

I got to meet the legend, Ed Schempp 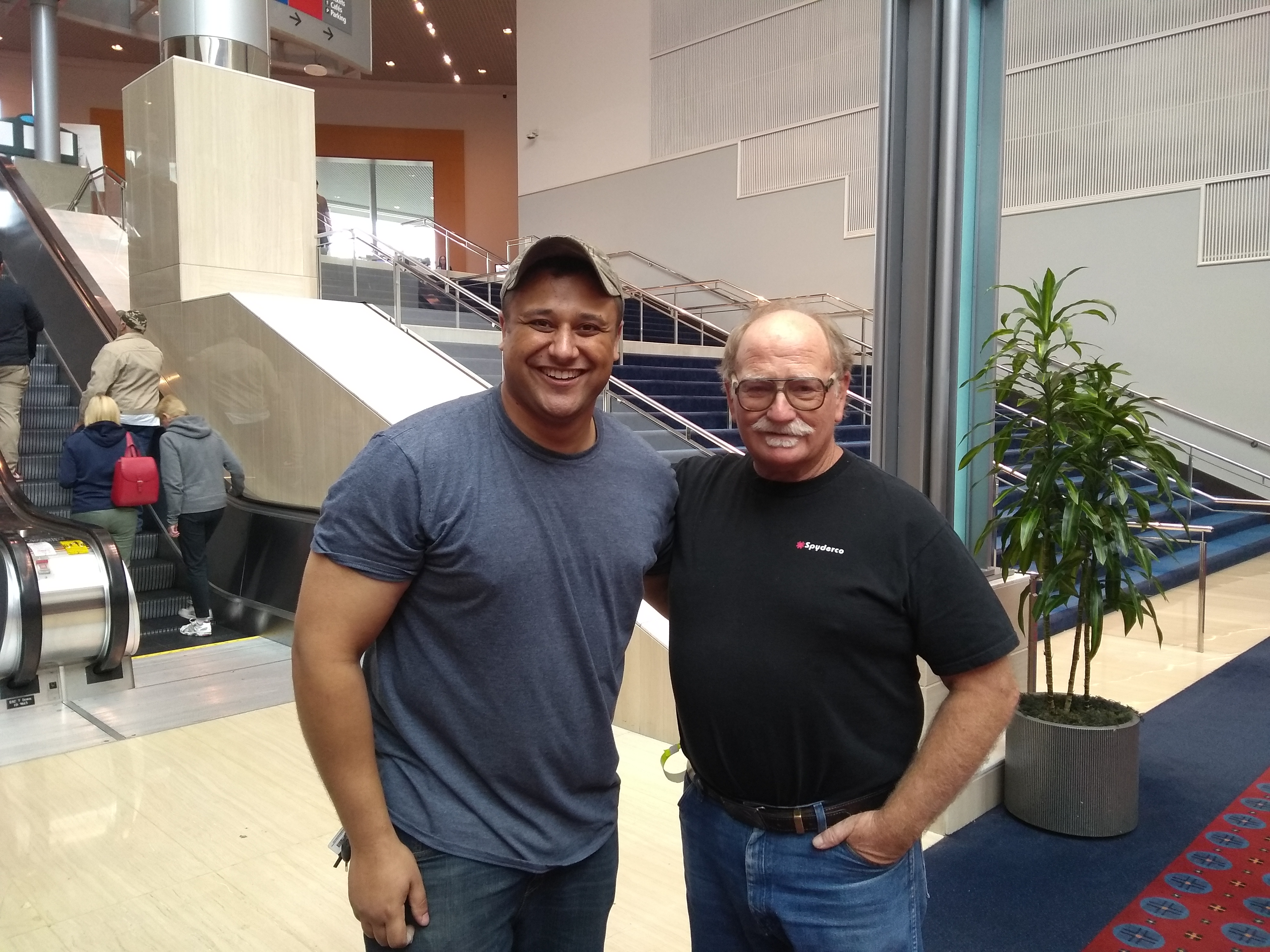 He was carrying his Schempp Bowie. Looked like it was getting some good pocket time. He said he was a huge fan of the deep carry wire clip. I agree, very comfortable and low profile.

I hope Spyderco releases more of his designs.

I also talked to Per Jarbelius at Damasteel. They had their usual luxury Damascus steel but also a new one called DC18N is using a new exotic core steel called N11x.

After talking, it turns out to be a Damasteel version of Vanax Superclean.

I asked if we would see a non Damascus version.
Per said, Nothing planned at this time. Although they do have Nitrobe77 available.

After the show it looks like Per has posted the composition on the Damasteel site. It was first announced back in July I believe and Brian Tighe released the first customs showcasing the steel with Per. However the chemistry had been a mystery until bladeshow West.

They Had brought the Metallurgist from Buderus Steel (German steel company, a part of the Bohler-Uddleholm) 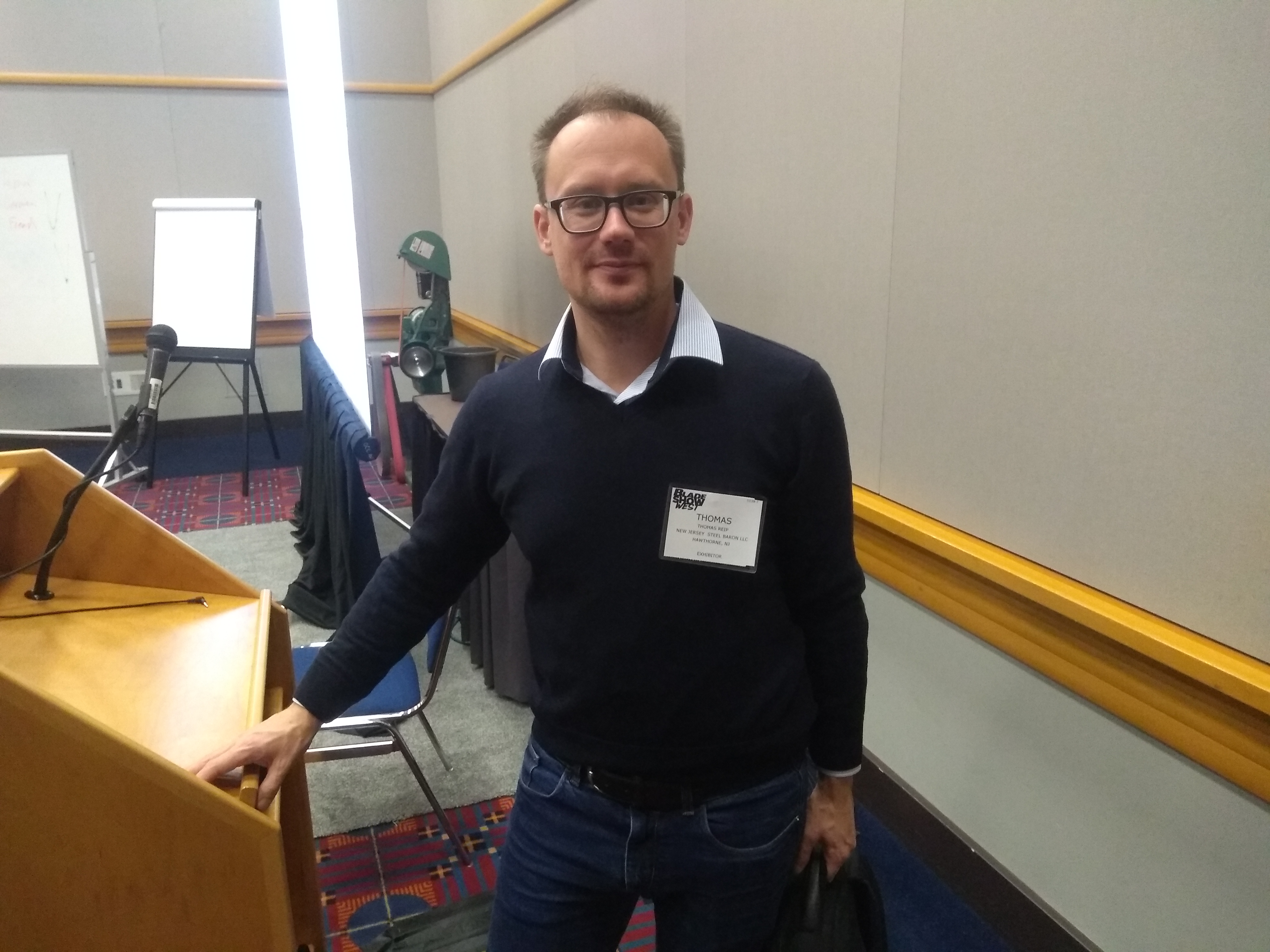 Thomas Relp, who had delvolped Nitro V for New Jersey Steel Baron as a modification and upgrade from AEBL and previous Buderus Steel Nitro B. The composition also resembles 14c28n but a little more "kick".

Its really cool to see steels being made just for knives and for New Jersey Steel Baron to put on the seminar with the Metallurgist explaining the origin of the material, how it is made, it's purpose, and update to heat treatment with from feedback over the past year and a half. 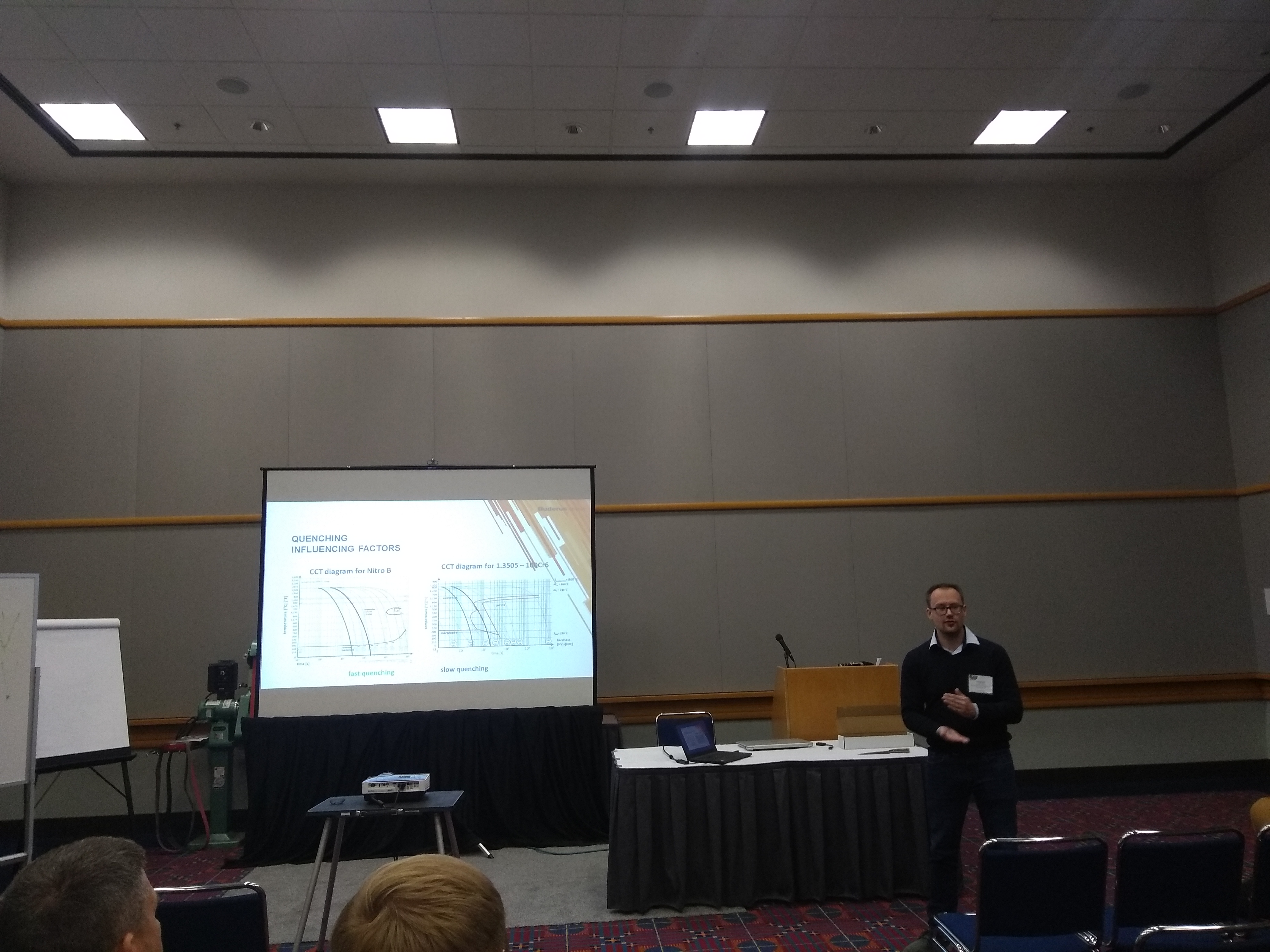 What excited me was the high working hardness that could be achieved and the edge stability it can achieve.

The curves showed the ability for a 62-64 HRC with cryo and after 2 temepers.


It would be interesting to see a Spyderco in the steel.
Especially with a knife using the Nilakka geometry


It would be a great Sharpening steel that's easy to touch up and resist chipping despite being stainless and at higher hardeness thanks to the finer structures in the steel. It definitely won't be as wear resistant as s30v but the geometry can run lower and especially with a higher hardeness to resist the rolling at the edge.
Big Brown Bear
[url]https://www.youtube.com/user/shawnhouston[/ur]
Triple B Handmade Knives
Top

My favorite was meeting CultroTech a Russian based custom folder crew.

They had the best cutting performance folders at the show.

It all comes down to steel, geometry and heat treatment.

They where using steels like s110v at 64 HRC at 0.012" behind the bevel. They even put hand sanded, mirror finishes on the blades using diamond polishing paste removing every last scratch step by step. 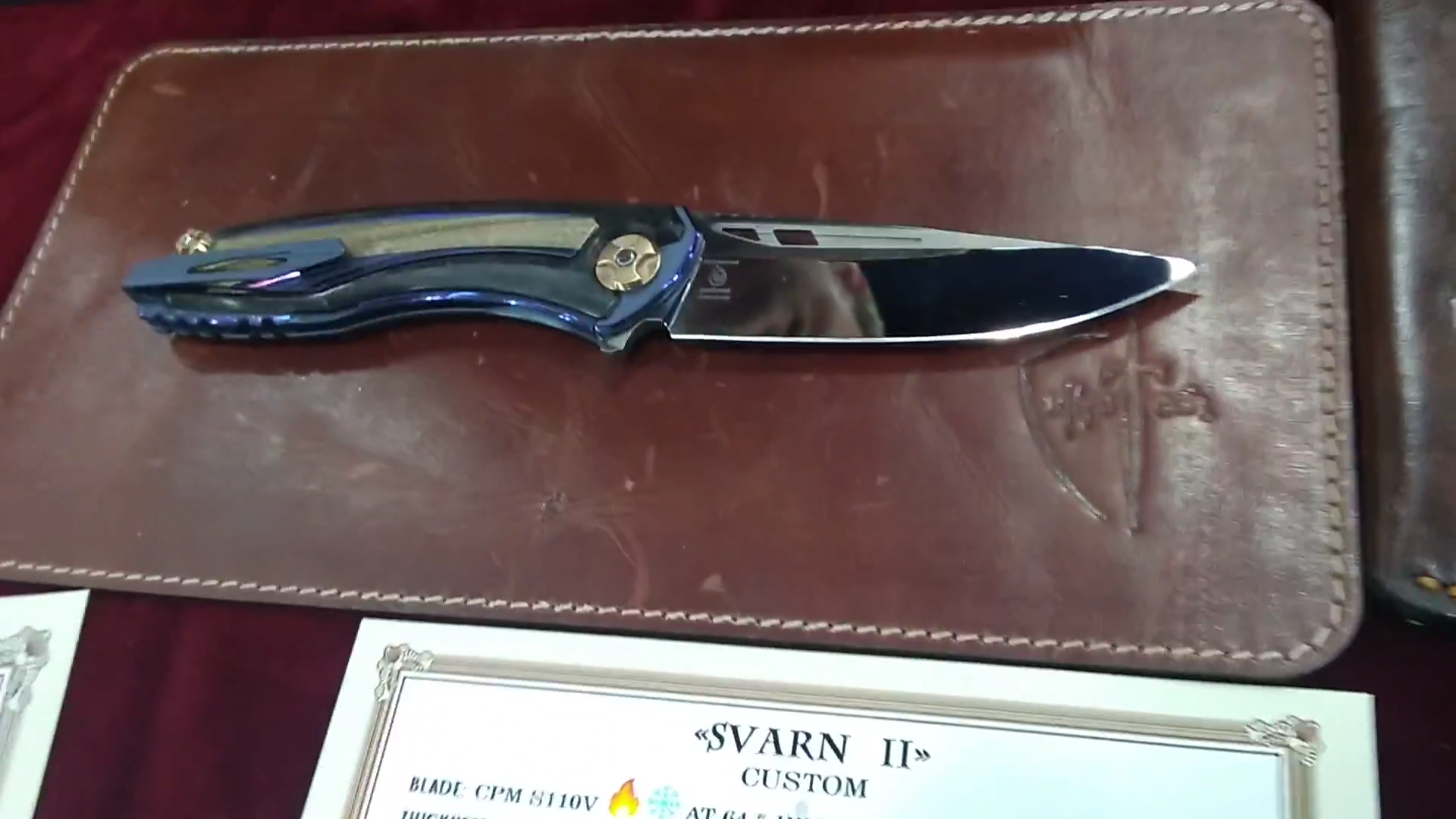 Valentin had said it took him a week just to put that mirrior finish on that one custom 3.75" blade. His dedication was insane.

I was so impressed by there work I had to give them a piece of 15v because the world deserve another masterpiece from these men. It will be cool to see it next year at the show. 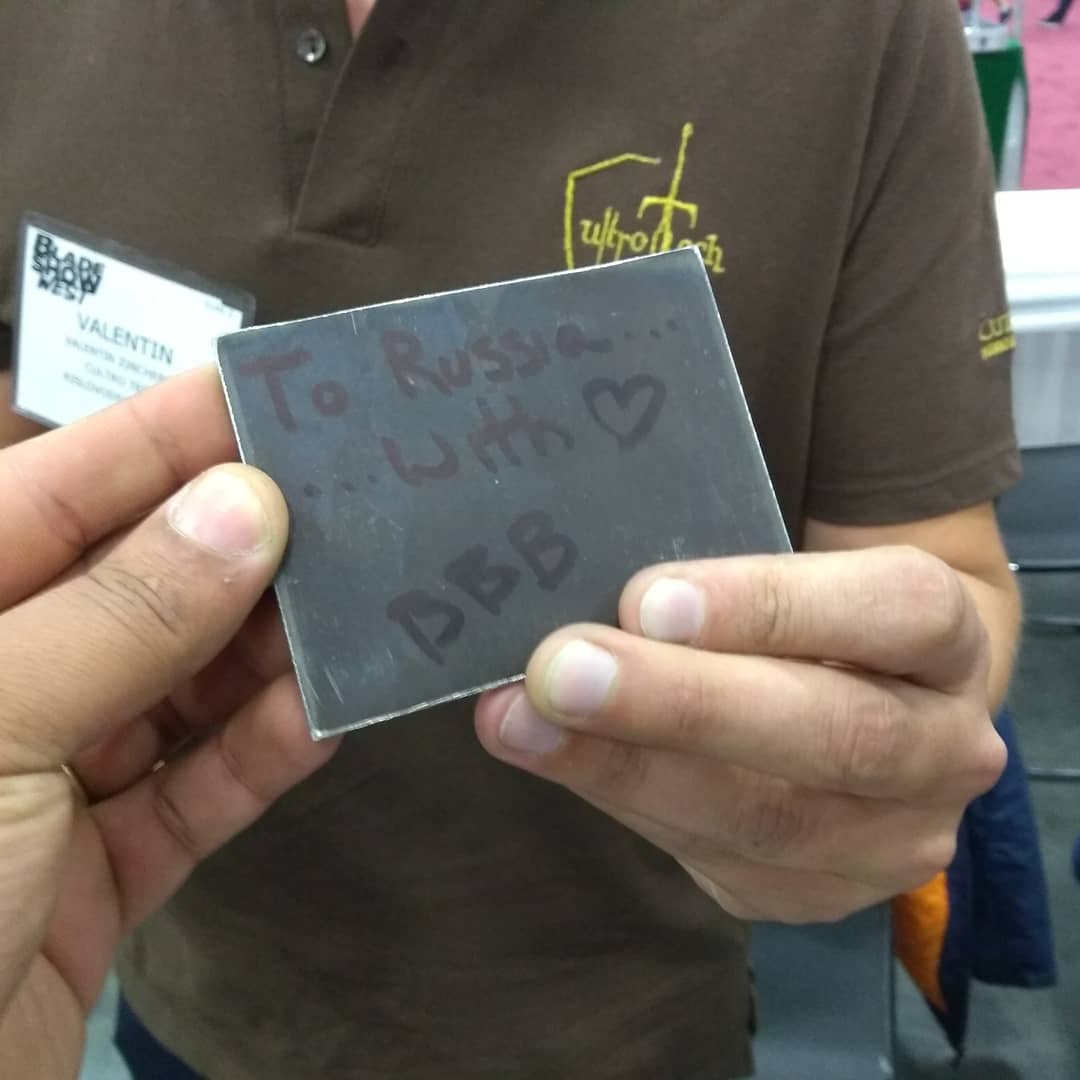 They didn't speak much English but we all understood steel.

It was very exciting to exchange ideas about heat treatment. In Russia, they really push the boundaries with High Vanadium Alloy powder steels at high hardeness with geometries made for high performance cutting.

So much to learn from our Russian brothers. 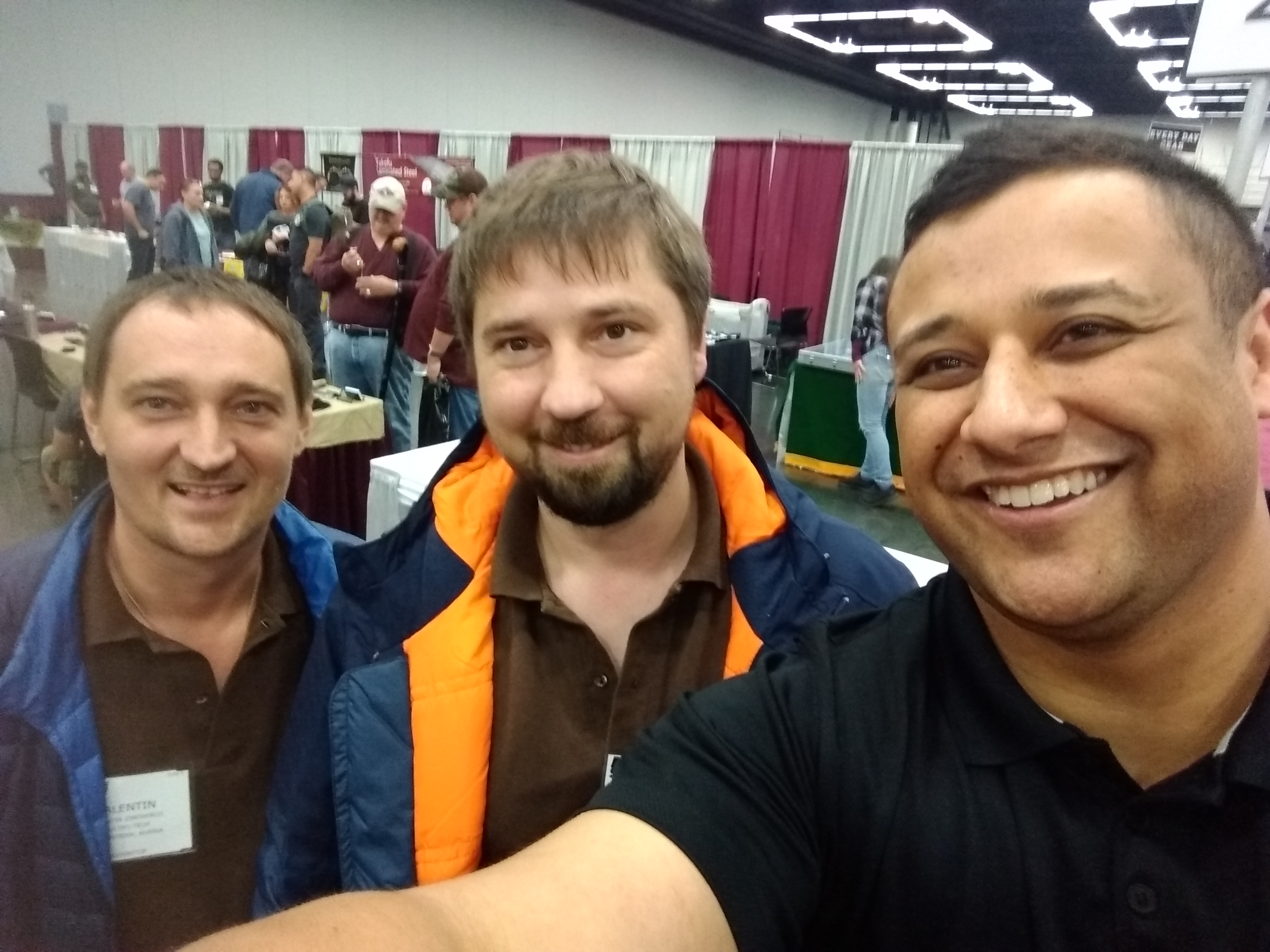 All in all, it was a good show, I hope we get to see a bigger Spyderco presentation next year. We'll all like to see Sal. He is my favorite.
Big Brown Bear
[url]https://www.youtube.com/user/shawnhouston[/ur]
Triple B Handmade Knives
Top

Glad you guys enjoyed the show. Gail and I were working the Annapolis show. Can't be in two places at once. I'm sure we were well represented.

Thanks for all the posts/coverage Shawn!
Top
Post Reply
44 posts