I know, I know, yet another sprint request. But hear me out, I believe this one is more warranted than usual.

I want Spyderco to re-run the R. Let me explain why we need another R, and let me know if you're with me. 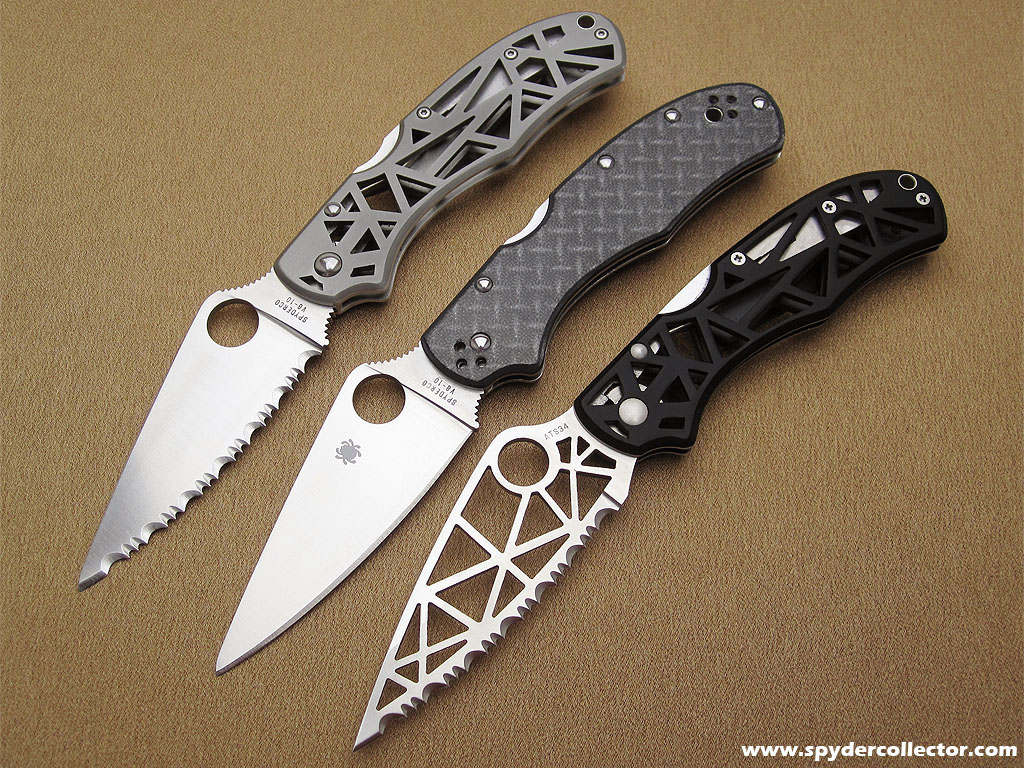 Big thanks to Mr. Blonde for the photo. Above are the 3 versions of the R that Spyderco has made. Unlike the majority of Spyderco's designs, the R was only ever available as a limited run or a sprint, it has never been in regular production. According to Spydiewiki, the Rs were released in '99, '05, and '12 respectively. As such, I think it's high time we R fans got a chance to own another. Perhaps more importantly, I think it's high time some folks who never realized they wanted an R to have an epiphany.

Want the Stretch with a deeper choil, or a straight spine? Try the R.

Want a larger Delica with a choil? Try the R.

Want a backlock PM2, or a PM2 with less belly? Try the R.

It probably seems like I'm constantly derailing threads talking about the R, but it's often because I see people requesting modifications to other models that are already executed on the R!

The below pic is the R alongside some common similarly-sized models: 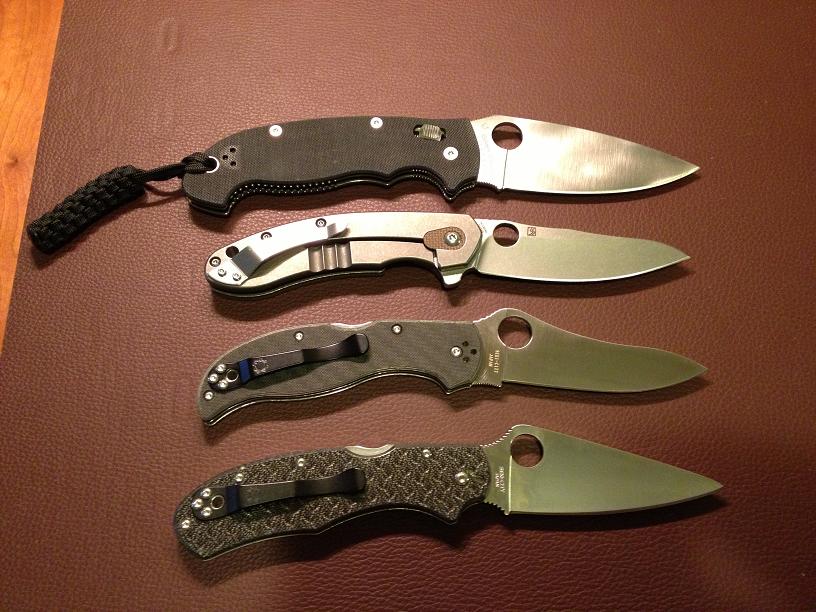 While I've got the mic, I'm going to suggest some sprint ideas for the R. I'm not one to clamor for supersteels, and I'm perfectly happy with VG-10 to keep the costs down (relatively speaking, of course). These ideas are separate from one another...

I'm happy to hear your sprint ideas as well. If you want to see another version of the R, let's hear it!
Top

What can it do that a Caly 3.5 can't?
SHARPEN IT LIKE YOU LOVE IT, USE IT LIKE YOU HATE IT
~David
Top

So it's thicker top to bottom?
SHARPEN IT LIKE YOU LOVE IT, USE IT LIKE YOU HATE IT
~David
Top

I am all over this! I really want a G10 R model! It is one of my all time favorite folders. The only issues with mine are that the Nishijin is very slick and the Spydie hole is sort of small. I love everything else about it. 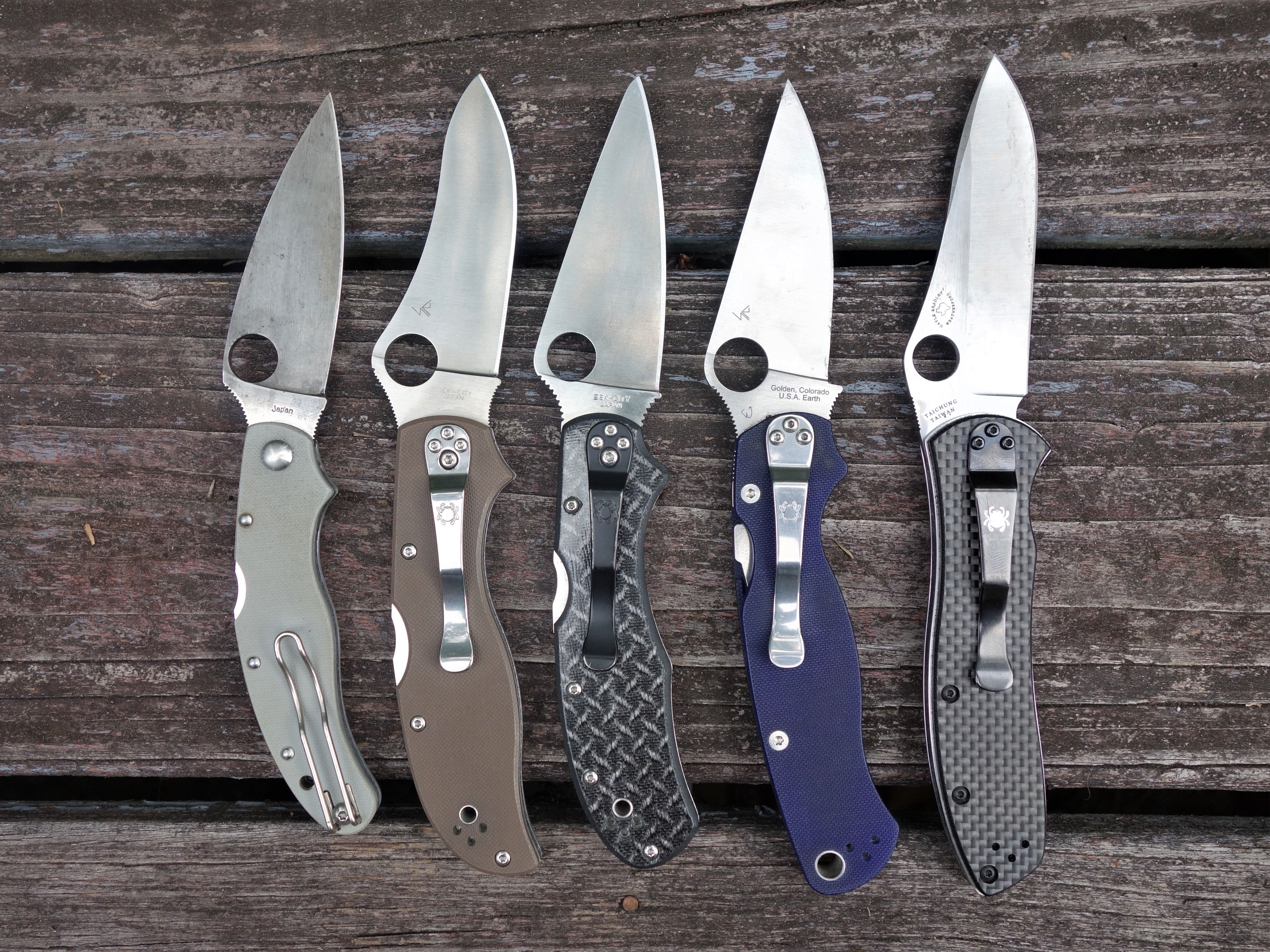 With the Delica and Endura. 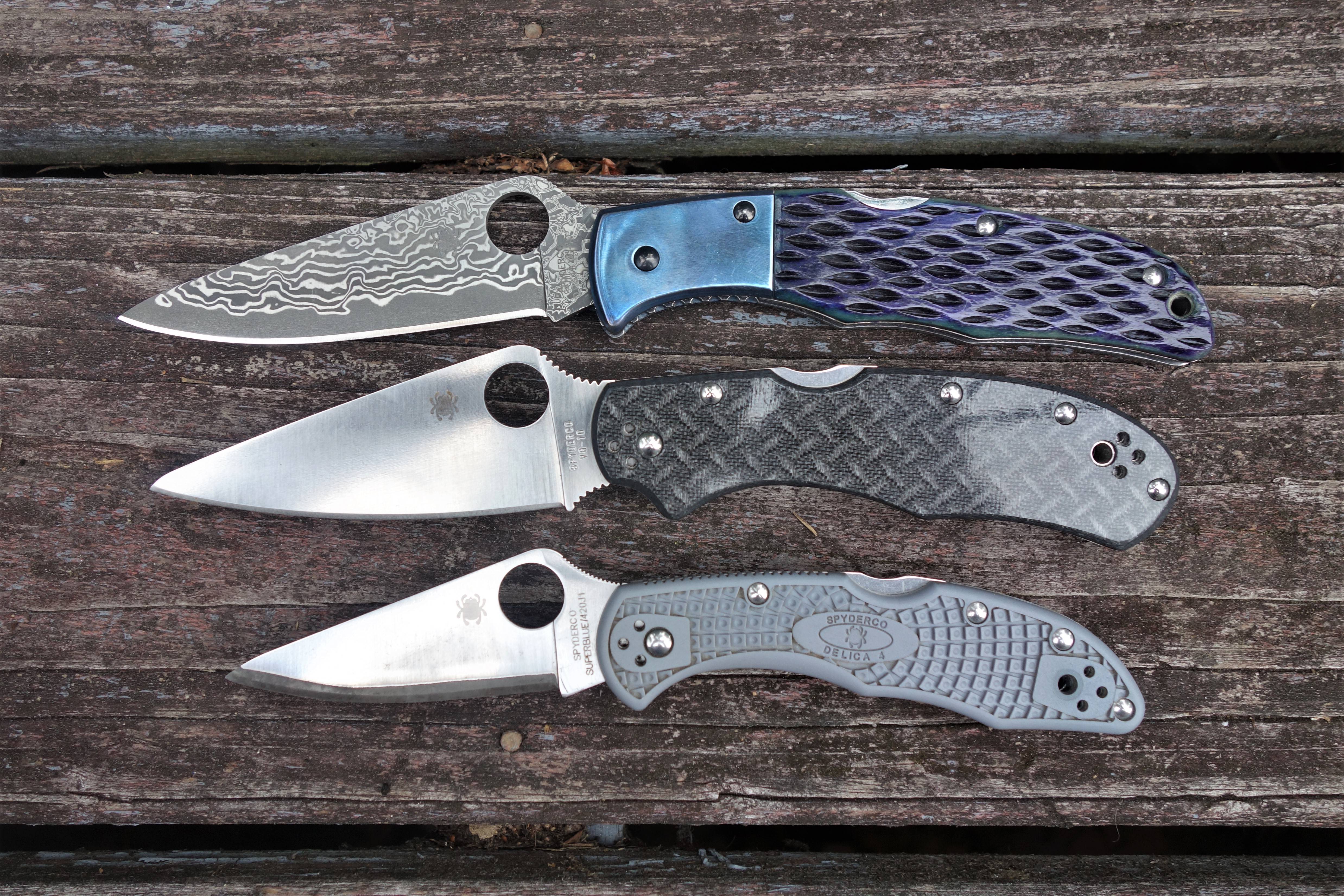 2012? So I just barely missed the last R. I'd be fine with vg-10 and whatever scales they put on one. It looks like a solid design and that's reason enough to get one, regardless of materials. The one with the skeletonized scales and solid blade is downright beautiful though.

Does anyone have a picture comparing it to the cara cara 2? I'd think they would have a lot of similarities judging by the pic of it next to the delica and endura. The R being made of higher quality materials, of course.
Top

I'd buy one in zdp or something different then vg10.
Top

Awesome pics, thanks for posting BFK. I don't really mind the slick scales too much, the ergos keep it locked in and the spoon style clip keeps it secure in jeans or other cotton pants. I wouldn't be opposed to something with more texture, though. Really I wouldn't be opposed to any config, truth be told. Similar to the delica, I like the design so much I'll pick up almost any flavor.

@Frozenspyder, the R was right at the beginning of my spydie collecting. It's a funny story actually. I had gotten a Delica, and then another, and was fully bitten by the bug. I learned of the BBS PM2 in M390/blue, the first run. I went there, put one in my cart, and then waffled for about an hour thinking: "what can this do that my delicas can't? Can I really justify $150 on a knife?" Laughable in retrospect, I know. When I finally decided to check out, they had sold out in the meantime! Well now the $$$ was burning a hole in my pocket and I was dead set on not missing an exclusive/sprint that I found interesting. The nishijin looked cool, and I like backlocks, so I pulled the trigger on the R immediately. The rest, as they say, is history, and it's one of those that I bought on impulse and it ended up being one of my favorite models, even to this day.
Top

Where was the R made? Seems like a nice contender for a Taichung model in peel ply cf and XHP.
I own an assisted knife and am embarrassed to admit I enjoy it.
Top

The two most recent ones were Seki. The first had its blades cut in CO and sent to Japan. Not sure where in Japan the first was made.

I certainly don’t want to naysay ideas here but Sal has previously said that they only take knives away from a maker in the most extreme of circumstances.
Top

Fully agreed. I total agree with you Tvenuto. Sometimes to go forward, you have to go back. People are always begging for the new hotness, but there are a lot of Spydies from "back when" with great designs. The R and the Superleaf are two of my favorite folders. I've always been a fan of the Endura, and the R is essentially an improved Endura in a lot of ways. The most recent sprint with Nishijin Glass Fiber was just stunning.

I'd be happy to see another R. CF or Ti would be fantastic.

Ok that barely qualifies as a joke but I tried.
http://www.KnifeSteelNerds.com - Steel Metallurgy topics related to knives
Top

The Nishijin R sprint was around for a while when I first started buying Spyderco. Came close to picking one up a few times, but wasn't crazy about that scale material, so I ultimately passed. Would be interested in a g10 sprint if it happened.

Agreed, the R is great. A G10 version would be a great user. I'm a fan of the semi-polished style on the Shaman, but any G10 would be fine. Would also make a great FRN model if sales would support it.
Tim
Top

R: definitely time to bring it back.
I had my eye on this knife for quite awhile, and I am very glad that I purchased this knife.
Think larger Delica.
(How many Delicas have sold?)

Fits the hand well like a PM2.
Blade length is there. Thin, pointy, stout, lockback slicer.
Nishijin handles are a little slick, but when you really look into the handles and the detail of the fibers, it's really intricate + stunning.

G10 would be sweet. I'm not too picky about the blade steel. It's not like spyderco uses any bad ones. I'd like zdp though. It doesn't get enough love these days.
Top

G10, peelply cf or Ti would be amazing I always over looked the R but reading these posts and seeing the comparison pics I realise I missed out.
Definitely be interested in a sprint and did someone say superleaf now that would be a special sprint :-)
Top