Now that things have settled down a bit following the festivities of the Blade Show, I would like to propose a discussion for a possible Sprint of the long-discontinued C66 Spyderco Vesuvius.

I actually had a brief opportunity to chat with Eric about this at the Blade Show. During our discussion, I jokingly said something along the lines of “…although the Centofante 3 is a stellar design, I’d really rather see a Vesuvius Sprint made in Golden.” Much to my surprise, Eric readily agreed and said that he too would like to see a Vesuvius Sprint! Granted, this does not necessarily guarantee that this project would come to fruition (or at least not in the immediate future), but it does allow us to get some ideas rolling and to also gauge interest. In light of the advancements in technology and experience that Spyderco possesses today, I believe that a rebirth of the Vesuvius would be very doable and would also be very well received by today’s end line users. In fact, one of our fellow Forumites, PSquared, started a thread back in April '18 regarding a desire for a Sprint of the Centofante 3, which is very similar to the Vesuvius: viewtopic.php?f=2&t=78927&hilit=centofante+sprint. There appeared to be a decent amount of interest in a Centofante 3 Sprint, but I personally think that a Vesuvius Sprint would be even more awesome because it would be ideally made in Golden, would feature a Compression Lock, and would be screw-together construction vs. pinned.

For those who may not know, the C66 Spyderco Vesuvius was designed by the late Frank Centofante and made its début around 2001. The Vesuvius design was a predecessor of the current Centofante 3 model, which is still going strong today. If my memory serves correctly, I believe the Vesuvius was also one of the first (if not the first) lightweight Golden-made models to feature the Compression Lock. The Vesuvius was also unique because it featured a special burgundy-colored FRN handle, nested stainless steel liners, and a palladium “Bug” inlay. The Vesuvius was chosen to be the 2002 Spyderco Forum knife and was produced in very limited numbers (500 total). I was fortunate enough to buy one of these models when they first came out and I have always loved the design. However, I don’t carry mine very frequently anymore because it would be too difficult and costly to replace if lost or stolen. I would love to have a new version of the Vesuvius to use and enjoy without having to worry about damaging a collectible piece.

Assuming that the original Vesuvius tooling still exists, I would like this Sprint to be built as close to the original version as reasonably possible. Other ideas/suggestions are certainly welcome, but here are my ideal specifications for this Sprint:

Anyway, these are just my thoughts. What do you think? Please feel free to share any ideas, thoughts, or suggestions. Let's get a discussion going to see if we have enough interest to warrant a Sprint. Below are a few quick pictures to give you an idea of what this model would look like.

Description: The Frank Centofante designed Spyderco Vesuvius is a beautifully contoured knife that has become a great reliable permanent knife in the Spyderco line-up with four different generations already. The fourth generation Vesuvius has the Wharncliffe blade and is not meant to replace third generation models, but offer an alternative blade shape. The first generation of this popular folder was designed with a compression lock, which was functionally problematic due to the design of the FRN handles, prompting a change to a lock-back design after two years, making the first generation compression lock Vesuvius a collectible knife. Generation 1 folders were also available with a Shell insert on the handle.
Generation 2 folders were similar to Generation 1 folders with the change of the lock type. Generation 3 folders added an addition groove channel to the handle, a switch to VG-10 steel and an adjustment to the location of the back lock. 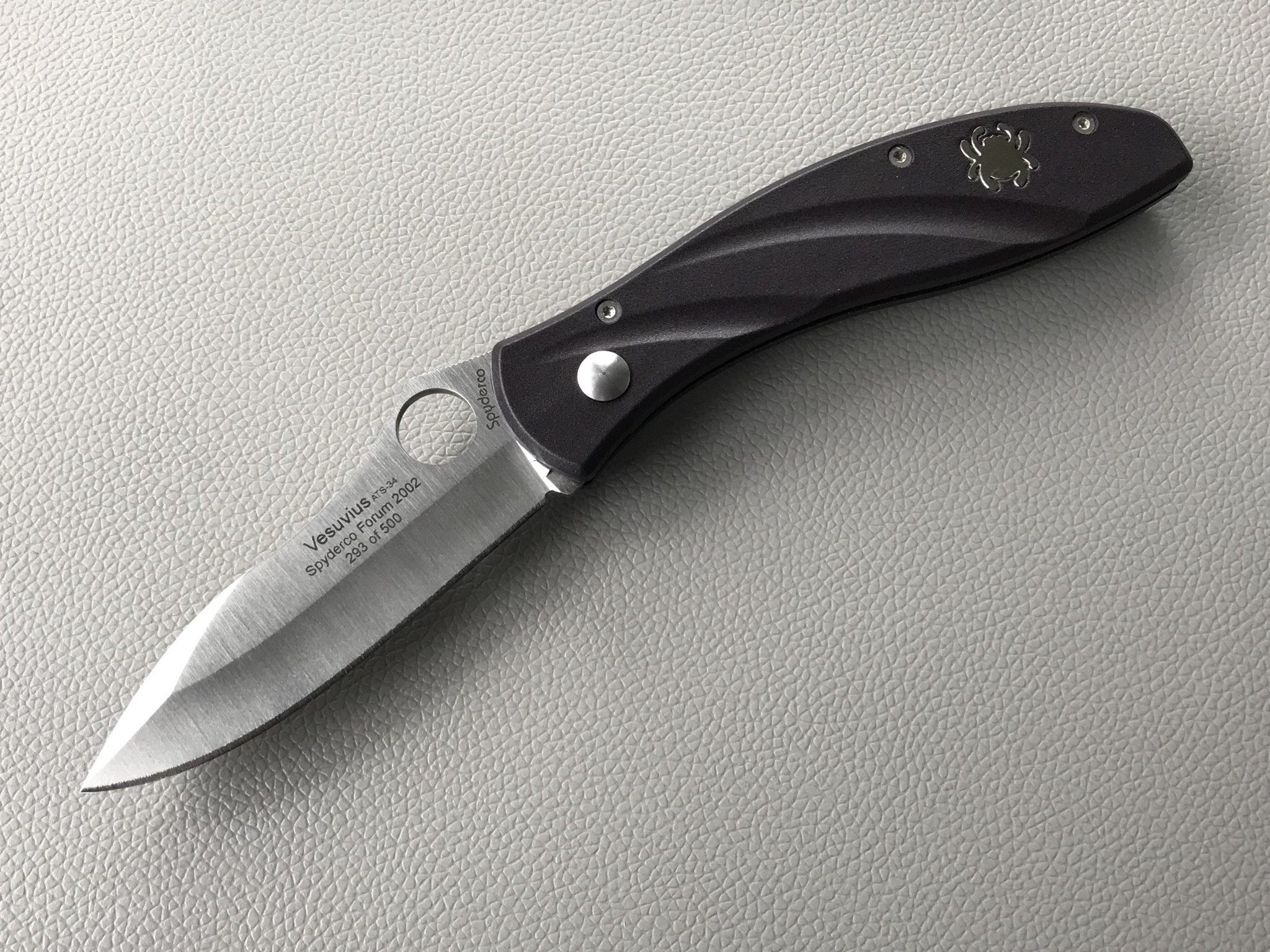 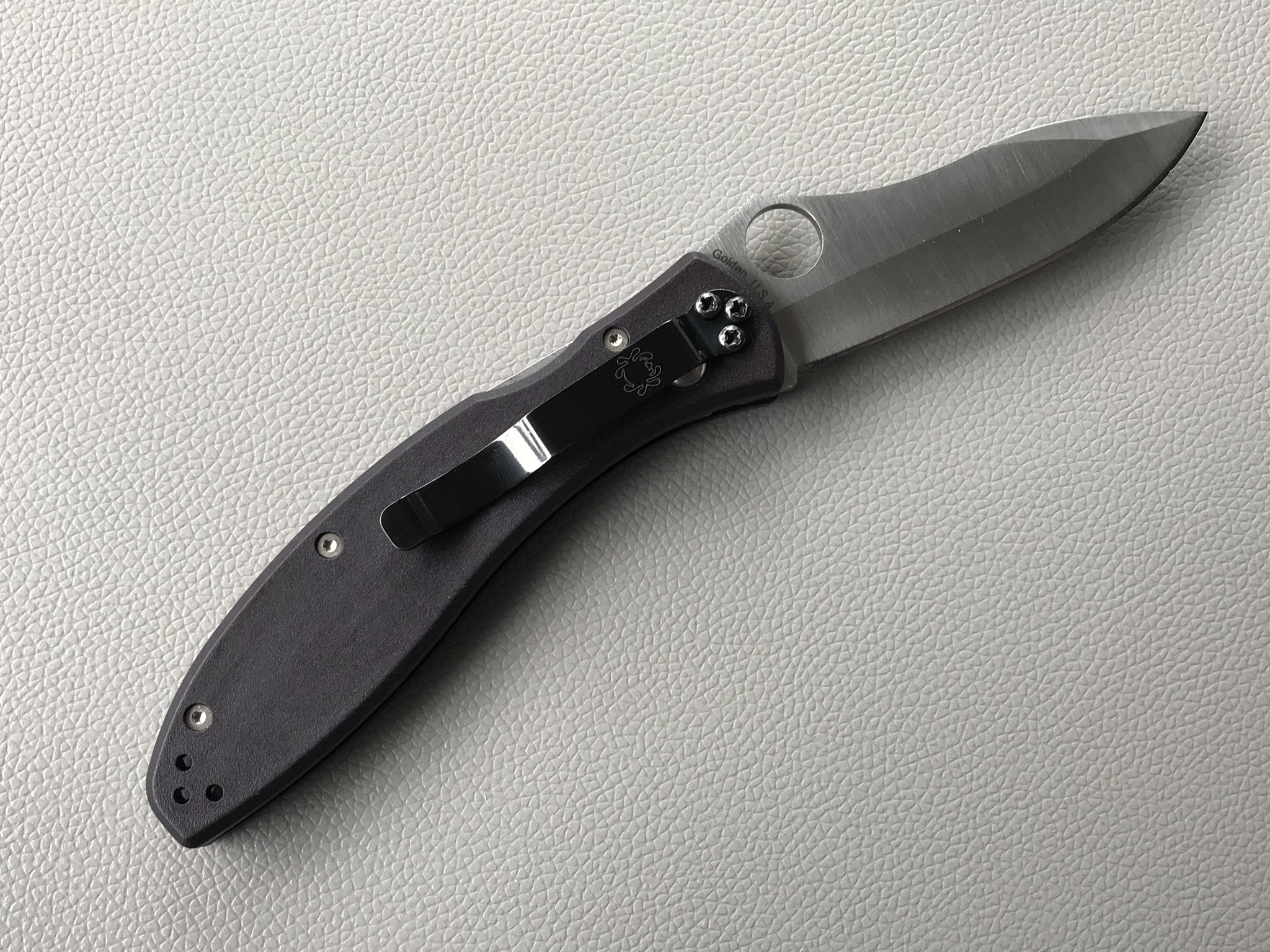 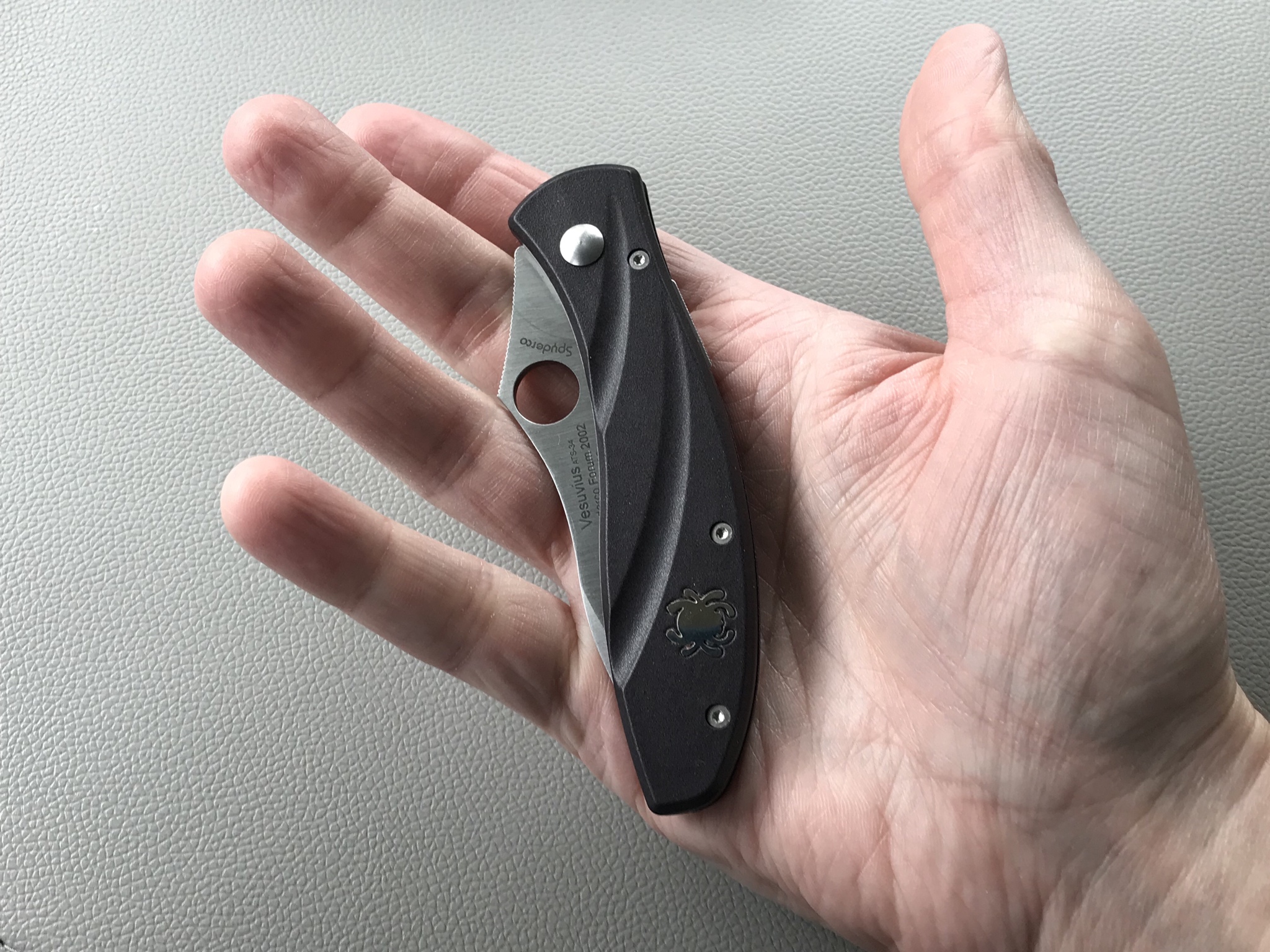 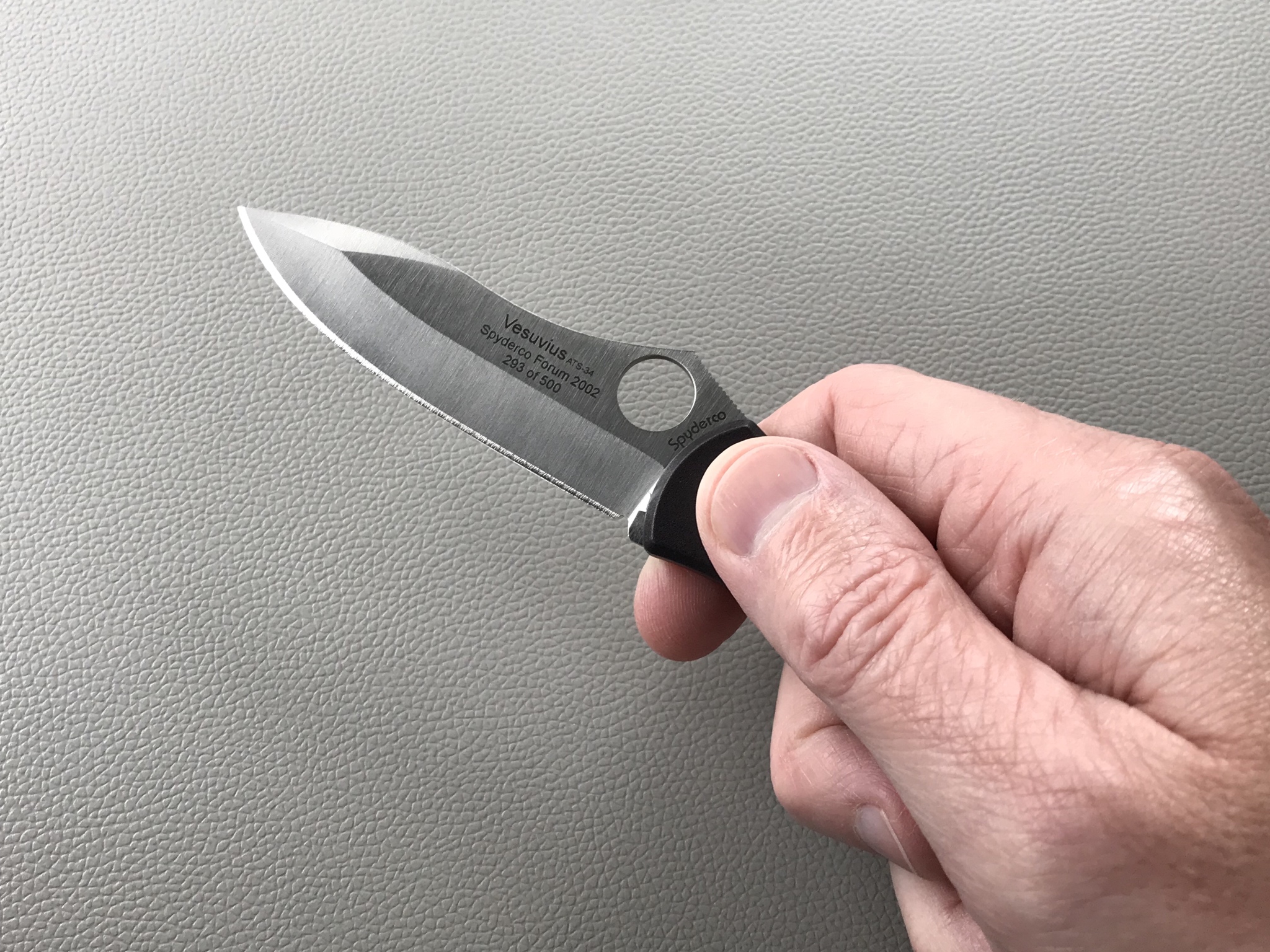 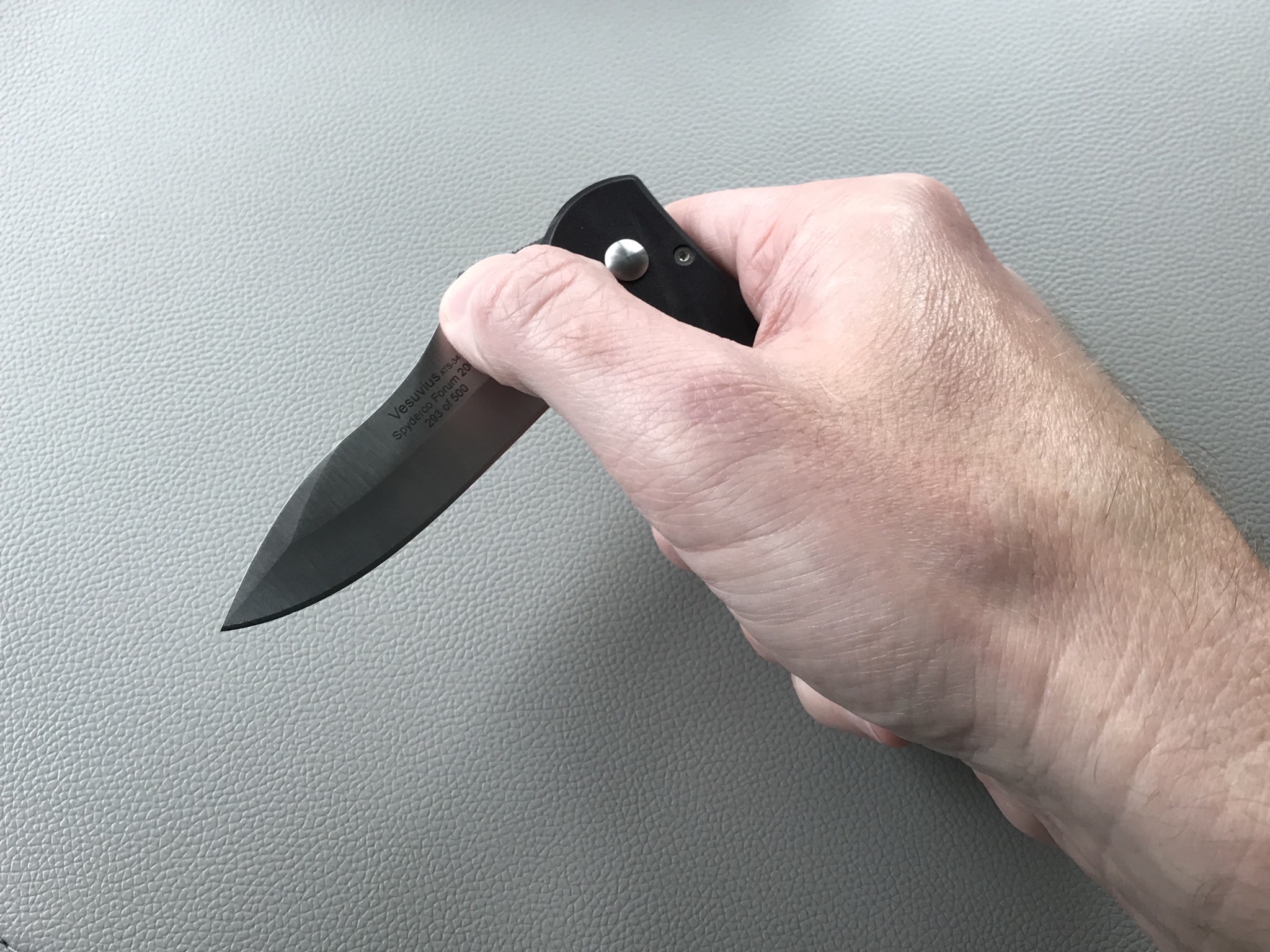 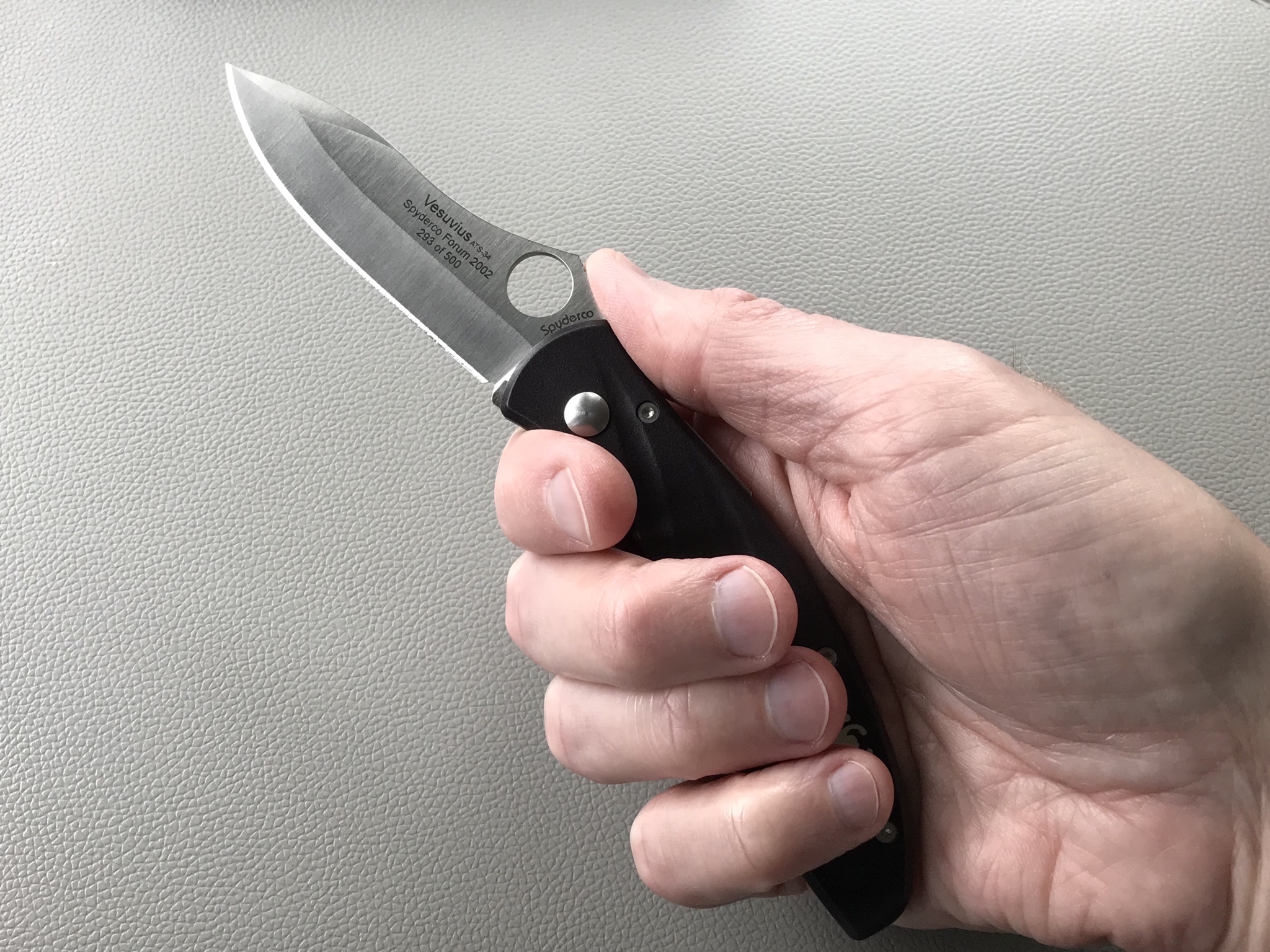 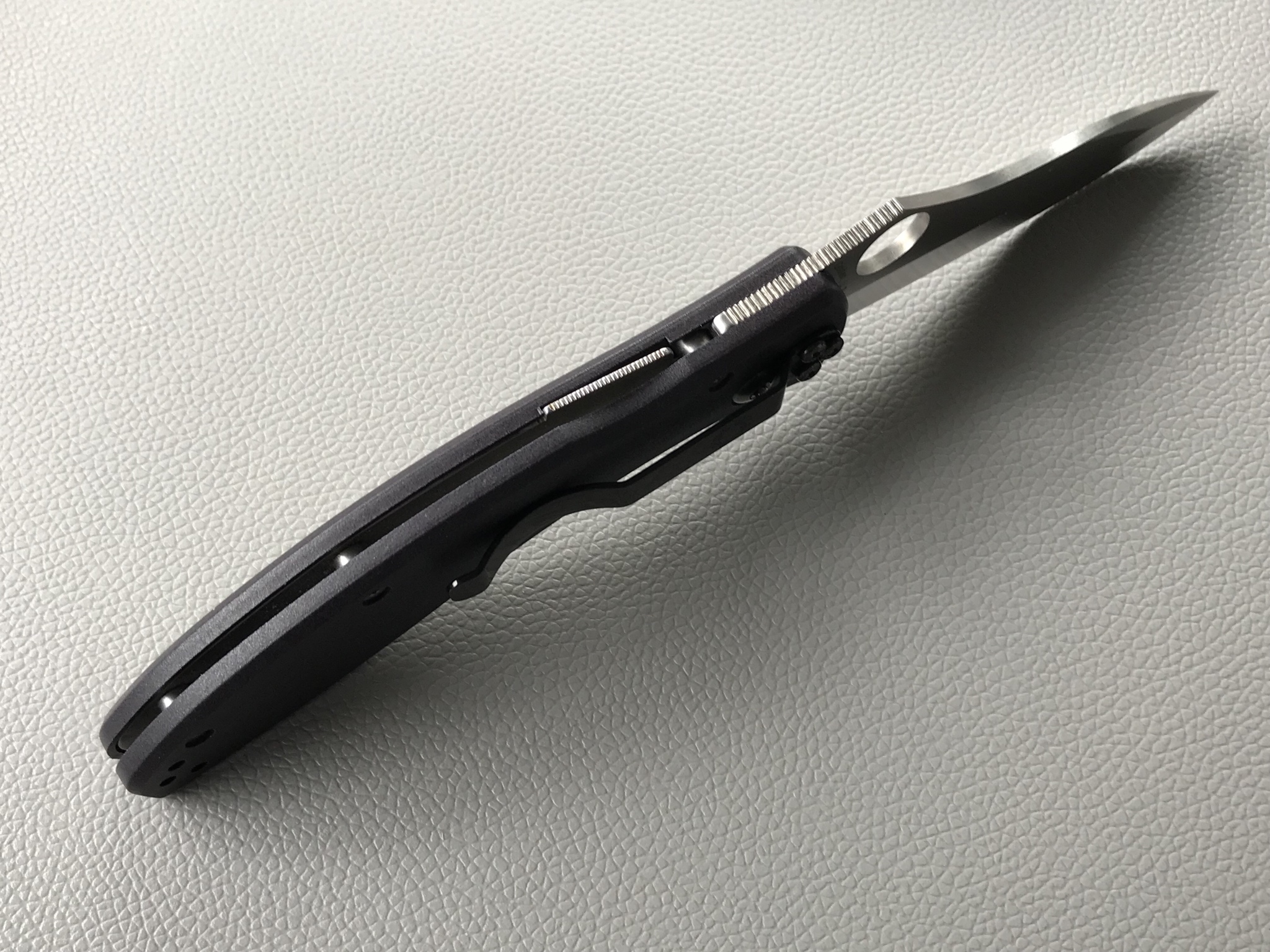 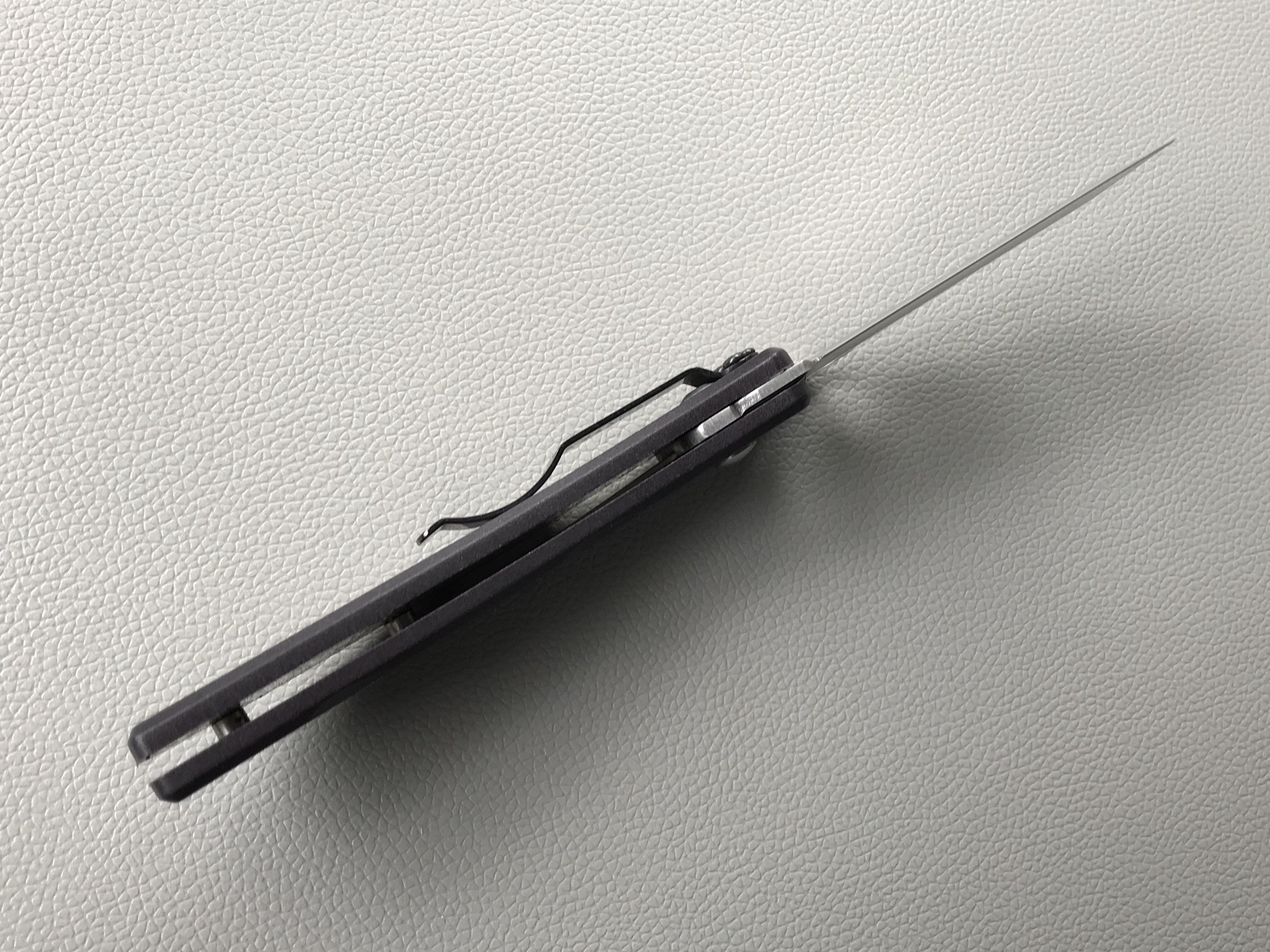 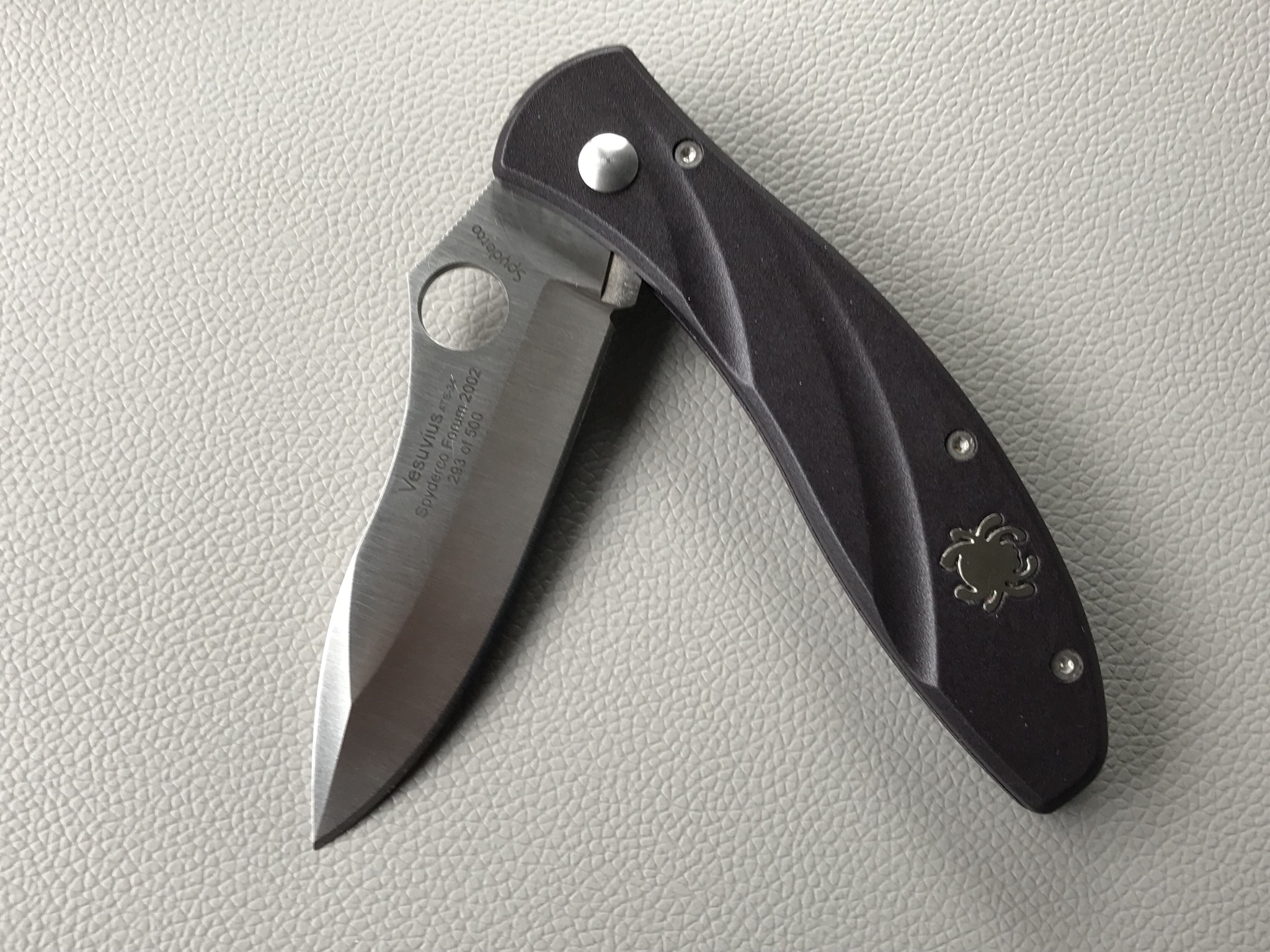 I'd be all over this. I was on board with the Centofante sprint, but I like this even better. FRN is perfectly fine, but something other than black would be nice for a sprint. Also, I'd like something a little more special than S30V for a sprint run too, although I'm not sure just what that is.
Top

I like when they do sprint runs of discontinued models that I'd like to have. I'd have a hard time passing a sprint Vesuvius up. So I'm in!
Of all the things I've lost I miss my mind the most!
Top

I am totally interested Michael. The Vesuvius is one of my first compression lock knives. I would also like the integrity and spirit of the original to be preserved. Thin blade stock, hollow ground, nested liners, Golden made & compression lock. I also think some sort of inlay is a requirement as almost all of his Spyderco collabs contained an inlay of some sort.

Can anyone confirm that the tooling for this model still exists? My vote would be for smooth G10 and CTS XHP to keep the price somewhat reasonable.
Top

I'm in for practically any combination of steel/handle.
SHARPEN IT LIKE YOU LOVE IT, USE IT LIKE YOU HATE IT
~David
Top

I'm totally in. But didn't I read somewhere (i.e., somewhere on this forum) that the compression lock was giving them troubles with the thin blade stock on that knife?
Top

dj moonbat wrote: ↑
Sat Jun 09, 2018 1:29 pm
I'm totally in. But didn't I read somewhere (i.e., somewhere on this forum) that the compression lock was giving them troubles with the thin blade stock on that knife?

I recall something about lock problems but I assumed it was because it was an earlier version of the lock and they just hadn't perfected it. It probably would be better as a whole new model with all the improvements they've made rather than just a sprint of the original.
SHARPEN IT LIKE YOU LOVE IT, USE IT LIKE YOU HATE IT
~David
Top

This is more interesting to me than a Centofante 3 but I dunno, is this better than a Para 2? Would a Para 2 LW be better than a Vesuvius?
Top

PSquared wrote: ↑
Sat Jun 09, 2018 2:06 pm
I’m in. I’d prefer a back lock or a liner lock to a compression lock but if it has to be a compression lock I’d still get one. Right now I’m not fussy about specs, a sprint in any flavor would be nice.

If you want a back lock the Centofante 3 is already out there.
SHARPEN IT LIKE YOU LOVE IT, USE IT LIKE YOU HATE IT
~David
Top

I love my Centofante's and Vesuviuses (if that's even the correct plural...).
I'd love to see a root beer Vesuvius; it would look great as a contrast on the black like it did with the Native!

For me, this would be better than a lightweight PM2. The Vesuvius is way up there on my list of Spydies I want from before my time.

EDIT: I love my PM2, but there are occasions when the blade hangs in the cut and I wish the blade stock were thinner. My thinnest Spydie, my Chaparral, never leaves me wishing it were thicker. If the compression lock can work with a skinny blade, that's definitely what I want.

As for materials, like Evil D, I'd be down with pretty much whatever. I'd prefer not S30V, but I'd be lying if I said I wouldn't still buy it. XHP FTW, though.
Top

+1 on the XHP steel suggestion

For me, this would be better than a lightweight PM2. The Vesuvius is way up there on my list of Spydies I want from before my time.

EDIT: I love my PM2, but there are occasions when the blade hangs in the cut and I wish the blade stock were thinner. My thinnest Spydie, my Chaparral, never leaves me wishing it were thicker. If the compression lock can work with a skinny blade, that's definitely what I want.

As for materials, like Evil D, I'd be down with pretty much whatever. I'd prefer not S30V, but I'd be lying if I said I wouldn't still buy it. XHP FTW, though.

Yeah the thin blade is where it’s at.
Top

I'd find it hard to resist but I'd also like to see it at least get a deep carry clip upgrade.
Top

I’m in! I would like to see it in XHP steel with smooth G10 handles and wire clip...
Top

I’d love one. A slight contour to the handles would be nice. An inlay would be welcome as we have seen that before.

Something other than s30v would be fun but not necessary.
Top
Post Reply
34 posts