That is an awesome picture and even better post! Great idea, and you are spot on. This is a great group!

It really is a great community. I wish the whole world had shiny footprints

I also forgot to mention that the tree is next to my back patio. Which is where I spend a lot of time while on the forum. Like right now, actually.

I was not sure if the first upload I added to the link was big enough so I uploaded it again as the original size to meet the requirements. So if my pic comes across twice please disregard the first one (the smaller file), thanks!
Dragonfly G-10, Blurple PM2, Para3, Jani-Song, Dragonfly2 ZDP-189, Lil' Native, Chaparral LW, Delica WC HAP40, Para3 M4, UKPK red G10, Para3 LW, Para3 LW M390

@ Termite generally the last submission is considered the official one, as long as it matched your post, so you should be good.
Top 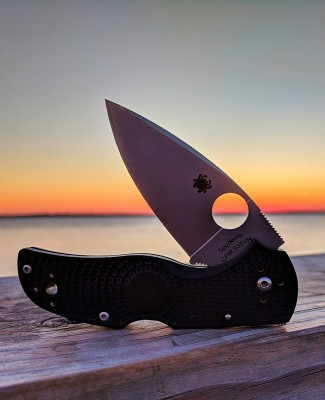 This is my first submission into the calendar contest. I know the heavy hitters have not entered yet. I just hope someone enjoys this photo. Thank you Spyderco for hosting this contest and good luck to everyone that has entered.

This is my first and so far only Spyderco I own. It certainly will not be my last. I am very happy that I started with this knife. The ergonomics, weight, and steel are great for my first knife. The handle just melts into my hand. Almost like it was designed for me.
My

You underestimate yourself Spyderflick. That's a great photo; I like the simplicity of it.
- Connor

The Meat man wrote: ↑
Tue Jul 31, 2018 9:58 am
You underestimate yourself Spyderflick. That's a great photo; I like the simplicity of it.

Thank you, I appreciate the kind words.
My 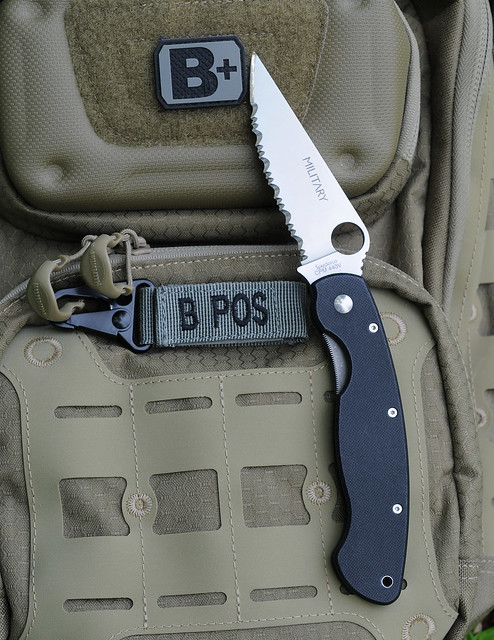 Military CPM 440V SE
The back pack has patch and tag with my blood type, this theme is to honor the vets with purple heart awards.

My entry is to present and admire a variety of different materials used for scales, huge collection of locks and fantastic and unique blade grinds that Spyderco offer to us. 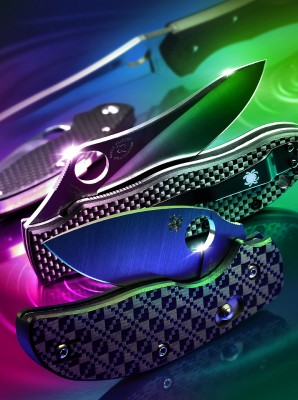 Thank You Spyderco for making the contest, and I wish a good luck to all contestants.
Tomasz tap
Last edited by tap78 on Thu Aug 02, 2018 7:16 pm, edited 2 times in total.
My

Well darn, I completely spaced that this ends this week, and I’m up camping.

Hopefully I can upload my full resolution photo with only 2 bars of service.

I guess this will be my humble submission.

This is my Paramilitary 2, in Maxamet.

It’s been in my pocket since I purchased it back in November. The edge retention of this steel alloy is absolutely phenomenal, and I finally only just really resharpened it a couple weeks ago!

As mentioned, we’re up camping, near Grand Lake, Colorado, and the knife is in my pocket and seeing plenty of use around camp. We hiked up the mountain a little way today, and the view from about 10,500 feet was breathtaking. I figured that this stump would make for a great photo. The Fraser valley can be seen in the background. 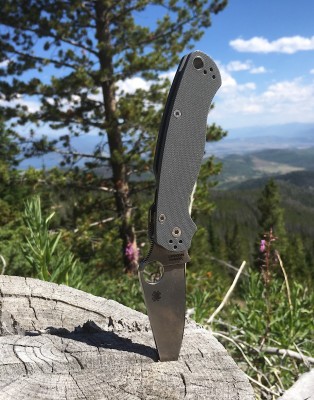 Thank you to our Veterans!
Top

My entry for the contest is this photo of my Spyderco Hundred Pacer. When I first saw the Hundred Pacer, I just knew I had to have one. This is probably one of my favorite Spydercos. Does a great job as a slicer! 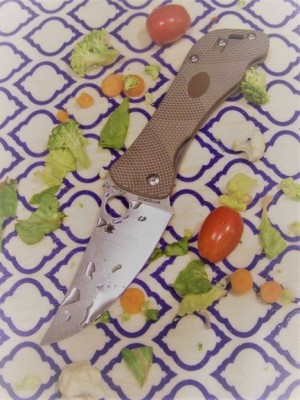 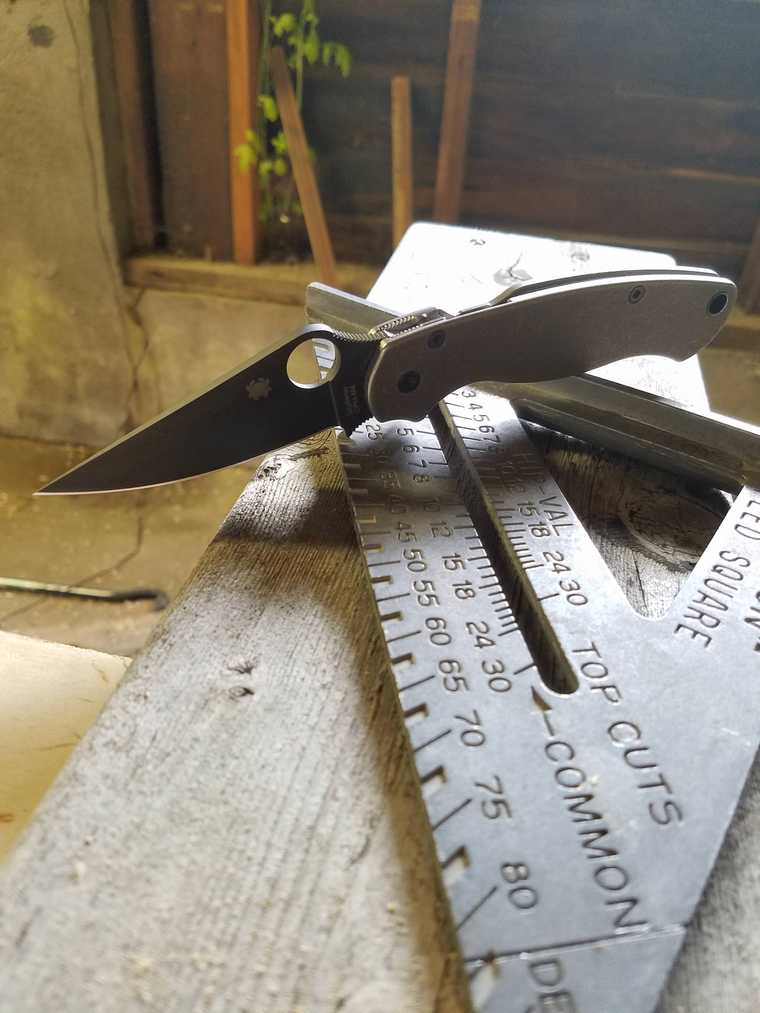 This knife is my constant companion, especially around the house and garage. I use it for everything - from installing drywall to trimming sticks for marshmallow roasting, from opening toy packaging at a child's birthday party to scribing lines in lumber for DIY furniture. I was working in the garage recently to make a coat rack from some reclaimed lumber. The afternoon sun was filtering in, and as I used the PM2 to help lay out the project, the light caught it. I snapped a few pics and got back to work.

Sal Glesser wrote:
These are not leggos.

My submission is from this year's family vacation at the beach. It was stressful with infants and a toddler between a few branches of the family, but I was able to catch a couple sunrises and capture this moment.

I tried several different Spyderco models, starting with my burnt orange HAP40 Endura. This Endura was my first limited edition (sprint, in this case) Spyderco, the one that started it all. I, therefore, tried getting a sunrise shot with that to signify a profound change in my tastes; a "new day" as it were. This and other attempts didn't feel right in the context of the ocean and sand. The first sunrise ended with no calendar-worthy photos.

After some consideration, I had a plan for the next sunrise I could sneak out to. This Pacific Salt, the knife I specifically purchased for the beach and fishing, fit the sandy context far better, despite lacking the same "new day" type of significance.

This Pacific Salt is a SE version, and as such, it has reintroduced me to the benefits of serrations when properly employed. They aren't shown in the photo, so that connection can't be made visually, but I don't mind. 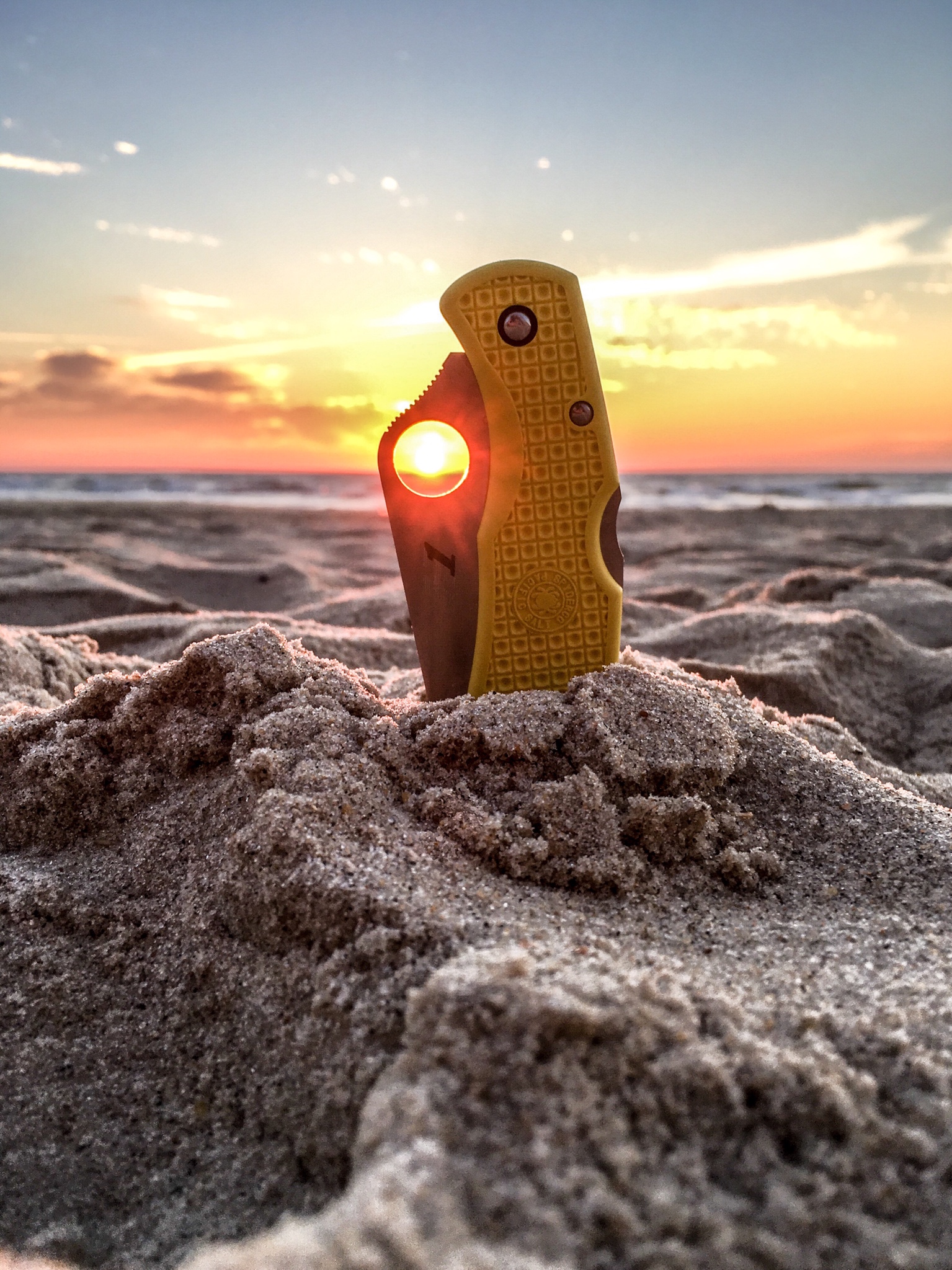 UGGGHHHHHH...thought I had me a good one of my yellow Salt. Now I've got to debate and most likely try a different pic...jerk face!

Yea that one looks like the cover to me. Nice work.
Top

That's a winner for sure Attila!

The Stretch has been my favorite EDC carry knife since its release in late 2004. The one in this picture started life as an early SS/Kraton Stretch and was customized for me by Steve Rice in 2005. It features lignum vitae scales over titanium liners. It has been carried considerably over the past 13 years. The photo was taken in 2009 while I was hiking at Grafton Lakes State Park in Rensselaer County New York. 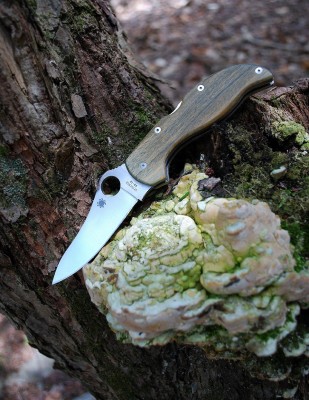