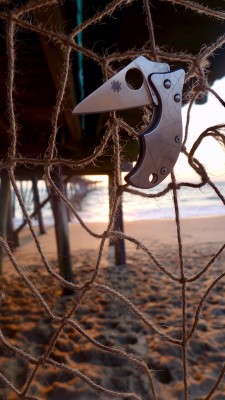 This year I created my own “spyderweb” for my long loved Spyderco Spin. Combine that with a sunrise over the Atlantic under the Avalon Fishing Peer and I crafted my entry...

Thanks for the contest again spyderco! Was a fun project. I submitted a hi-res version also, which has a ton more details.

Good luck to everyone.

Due to the lunch break, I was walking around and saw this old wooden railroad tie. An yellow flower was grown behind it...
I felt her steel body dressed in carbon fiber in my hand. A second later, The Beauty shone on the sunlight. My thumb slipped and stopped on the SpyderHole. "THWACK" - what an amazing sound from the liner lock. Sage 1 was ready for work...
... but this time - for a photo session. 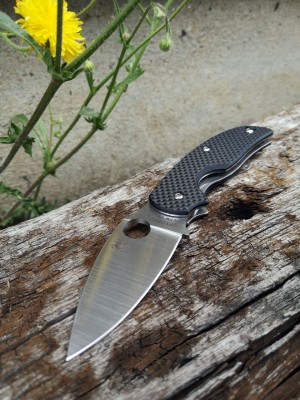 Hey Gsg9, liking your picture of the Caribbean, but don't forget to make a vertical one.
No landscapes this year

It'd be a shame to lose your shot at earning a spot in this year's calendar!

The Beast blending in its natural environment, lurking around water

I like this one a lot, LC200N, compression lock, ceramic detent, interesting grippy G10 handles, good sized blade, excellent execution
Took this picture when hiking, a Caribbean in my pocket, a Military in my backpack, happy days 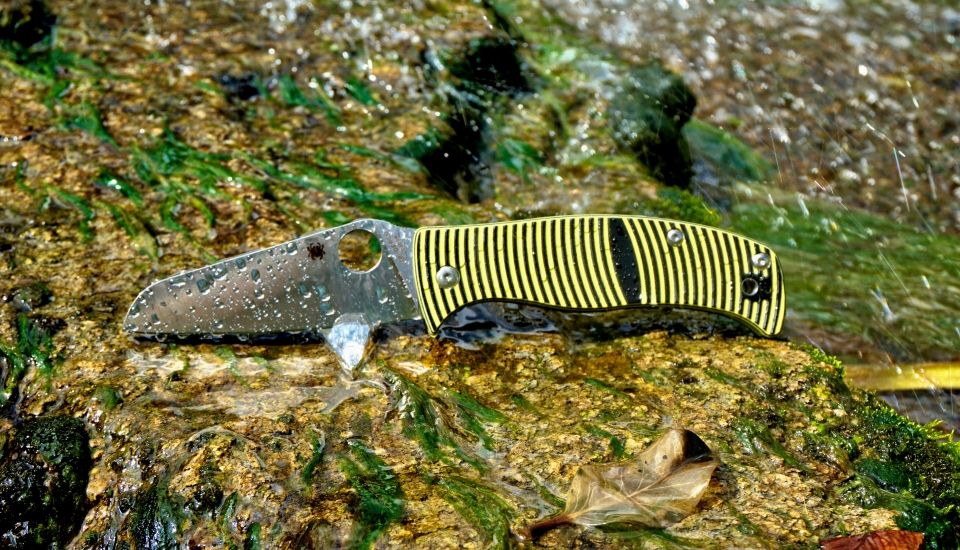 Great pic, but just wanted to remind you the submission is supposed to be vertical this year^^
Top

The Manbug is one of the most friendly looking knives in Spyderco’s lineup. Unfortunately, knife laws throughout Europe are very strict. Due to its small and capable design, the Manbug quickly became my go to option for any city trip. Because I live in The Netherlands, I went with the H1 steel version. In a country where we see more water coming down from the sky than sunbeams, a good stainless steel is a must have on any knife! 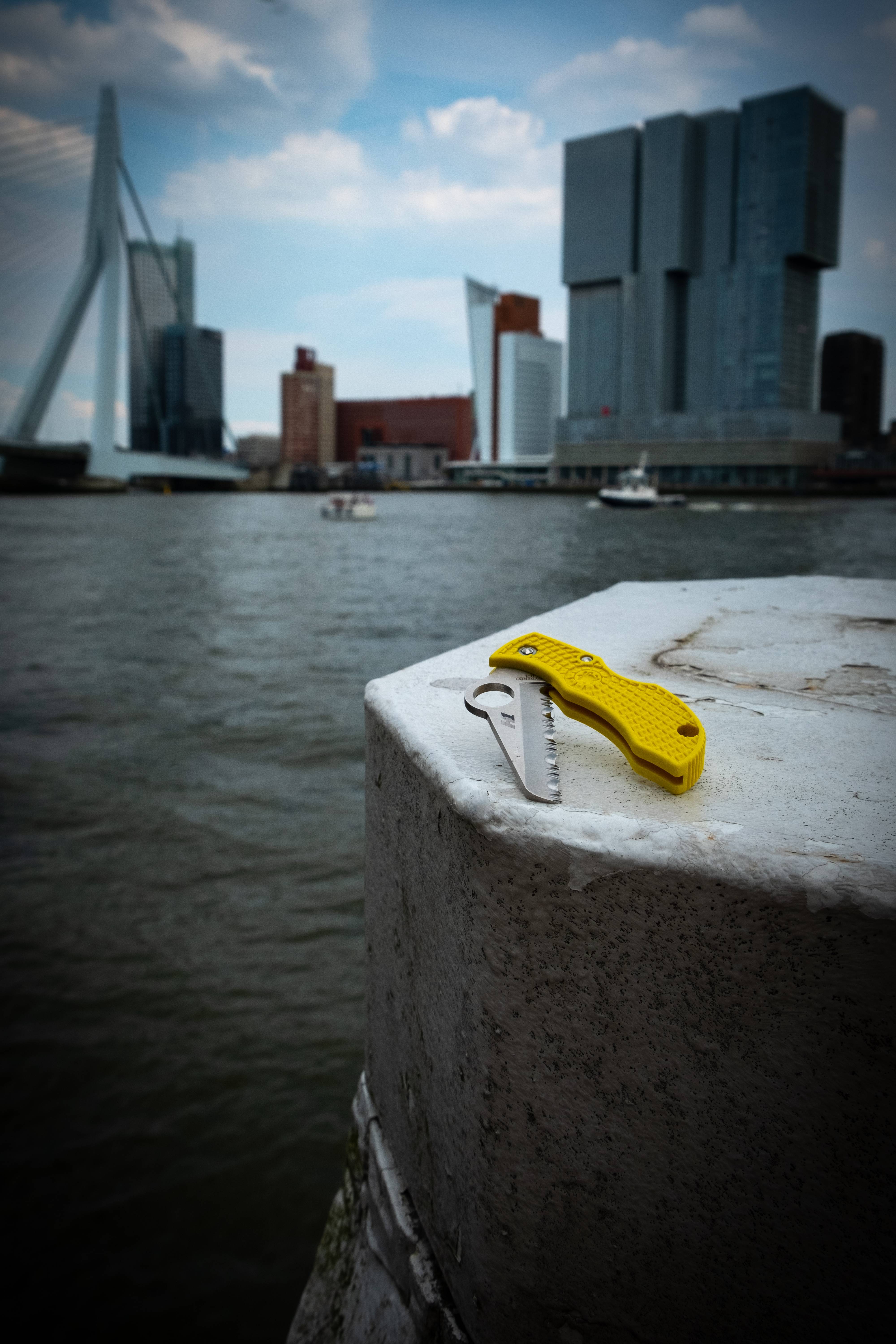 Thank you Spyderco for this great opportunity! Last year was a lot of fun. The Para 3 we won there is now one of my favourite knives. Good luck to all!

At last, a tactical bottle opener. I've searched for and been an advocate for a one handed folding bottle opener with a serious blade for years and Spyderco delivered with the ClipiTool Standard.

Large and small screwdriver tips, wire stripper, bottle opener, can opener and 3.5 inch blade make this a multi-tool with the essentials for the apocalypse or every day carry.

My favorite function is opening beers. Here it is shown on the deck of a beach house on Galveston Island.

First time applying for the Spyderco Forum Calendar Contest. I'd like to submit something classic - Spyderco Military, since it's my favorite Spyderco model. The knife on the pic represents CQI Spyderco Military, Dark Green G-10, and carpenter's CTS-204P steel. It's my edc knife for this summer.
I'm not much of a photographer, but here goes! 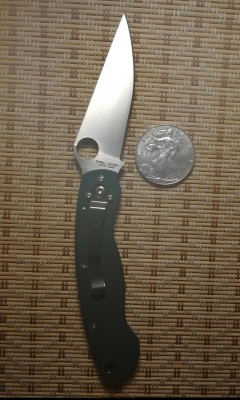 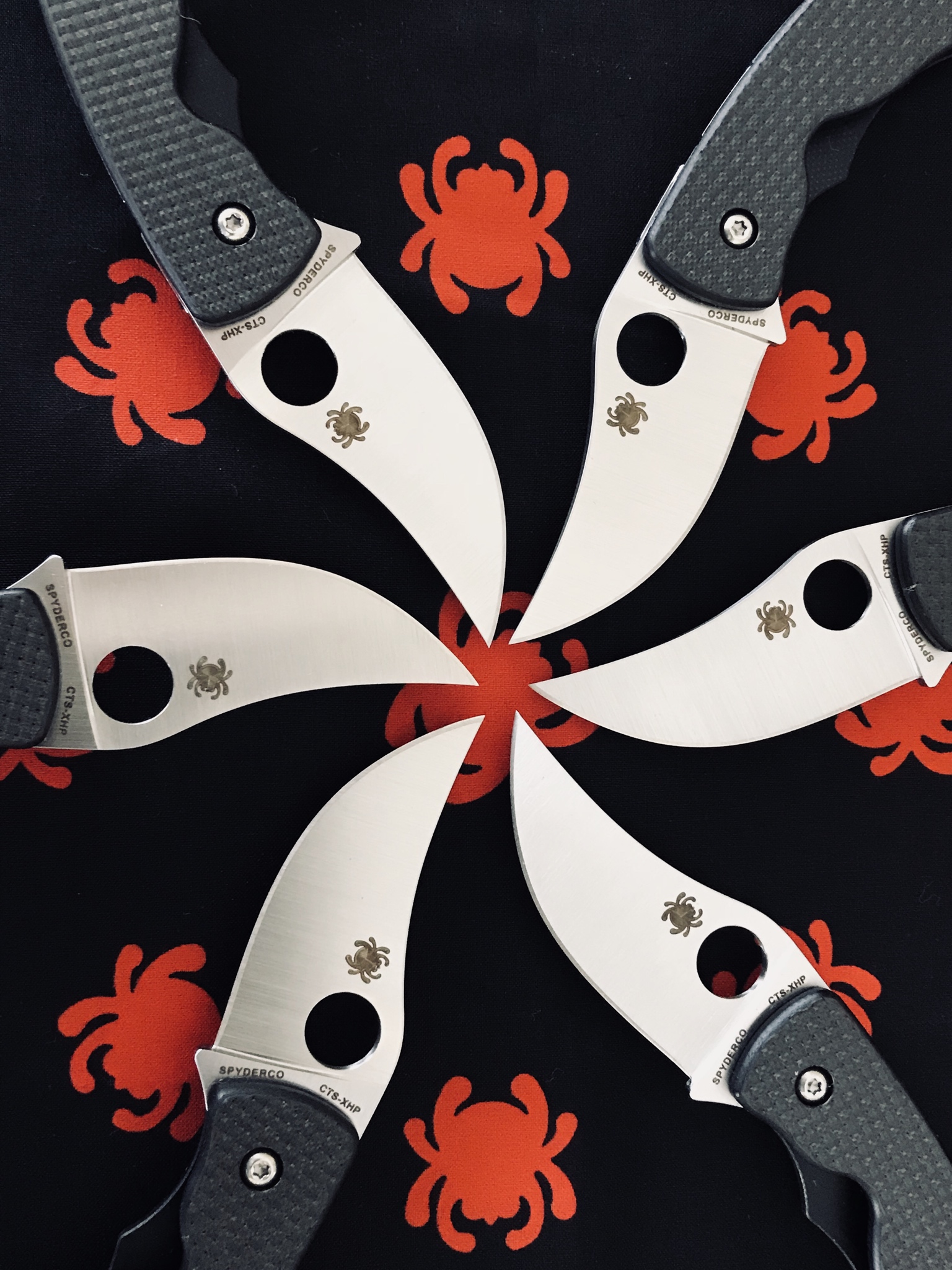 That is a good question, lol. If I win, maybe I would make some custom scales and do something special with it.

That is a good question, lol. If I win, maybe I would make some custom scales and do something special with it.

Would love to see what you come up with.
My

My submission for this year’s calendar doesn’t include a knife. I instead chose photograph the spyderco forum bug name tag. Model #BUGF. I wanted to showcase what I love about Spyderco. It’s more than knives to me.

Like many others, I stumbled upon this forum while trying to find a review for what was going to be my first Spyderco. A tenacious. I found so much more.

I discovered a community full of welcoming, intelligent, down to earth people who love knives like I do. People who just want to share their experiences and knowledge. People who will listen and offer any advice or help, and expect nothing in return.

I lurked for about 6 months before I registered and made my first post. And it was Sal himself who gave me my first welcome. I still tend to lurk in the background. Mainly reading posts new and old, trying to absorb all I can about these high performance tools.

This forum has taught me that there is so much more in my hand than just a knife. It can be a livelihood, a lifeline, or even just a hobby. Whatever it may be to you, this forum welcomes it.

And when I got my bug, I really felt like part of something special. Even if I don’t win a spot in the calendar, I will still feel as part of this wonderful family that Sal, Kristi, the whole spyder crew, and most importantly, the members here have created. Thank you all for reading this, and good luck to everyone! There are some amazing shots!

PS-I use this forum everyday. I consider it a tool just as much as I do the Spydie in my pocket. Thanks for the opportunity to everyone at Spyderco! If the Spyderco designed and made byrd knives are allowed, then here's my entry. If not, then of course you guys can just dismiss it.

Here, mother bird is looking out over her two little chicks that just hatched.

I've always liked a good deal and most of the Byrd line are definitely that.
Not so long after the Raven 2 was released I just had to get it and what a blast this knife has been for me.
Since I'm not really able to carry larger folding knives openly around too much, I've mostly been carrying it in or around the house as well as on longer forest hikes and the like. When I moved last year, this Raven did everything I asked from it and more. I dulled it hard, chipped it, but the CTS-BD1 took a great edge really quickly and the knife just kept on going. It made rebuilding a lot easier and in my mind will forever be connected to the house me and my girlfriend bought together.

I already stated I can't really carry large knives around. Having an office job doesn't really help a lot either. That's where the Finch and Starling come into play. Since I got them (and made a thread about them in the byrd forums here), they have rarely left my vest pocket.
They're small, but really sturdy and reliable, yet also thin enough to get everything you need in or around the office done.
It's like carrying a small traditional knife, but with more confidence.

A sidenote, the eggs used in this picture are goose eggs. My father's cousin owns large geese and often hands out eggs to the family. I vastly prefer them over any other egg I've ever eaten. They do make the Finch and Starling look even tinier! 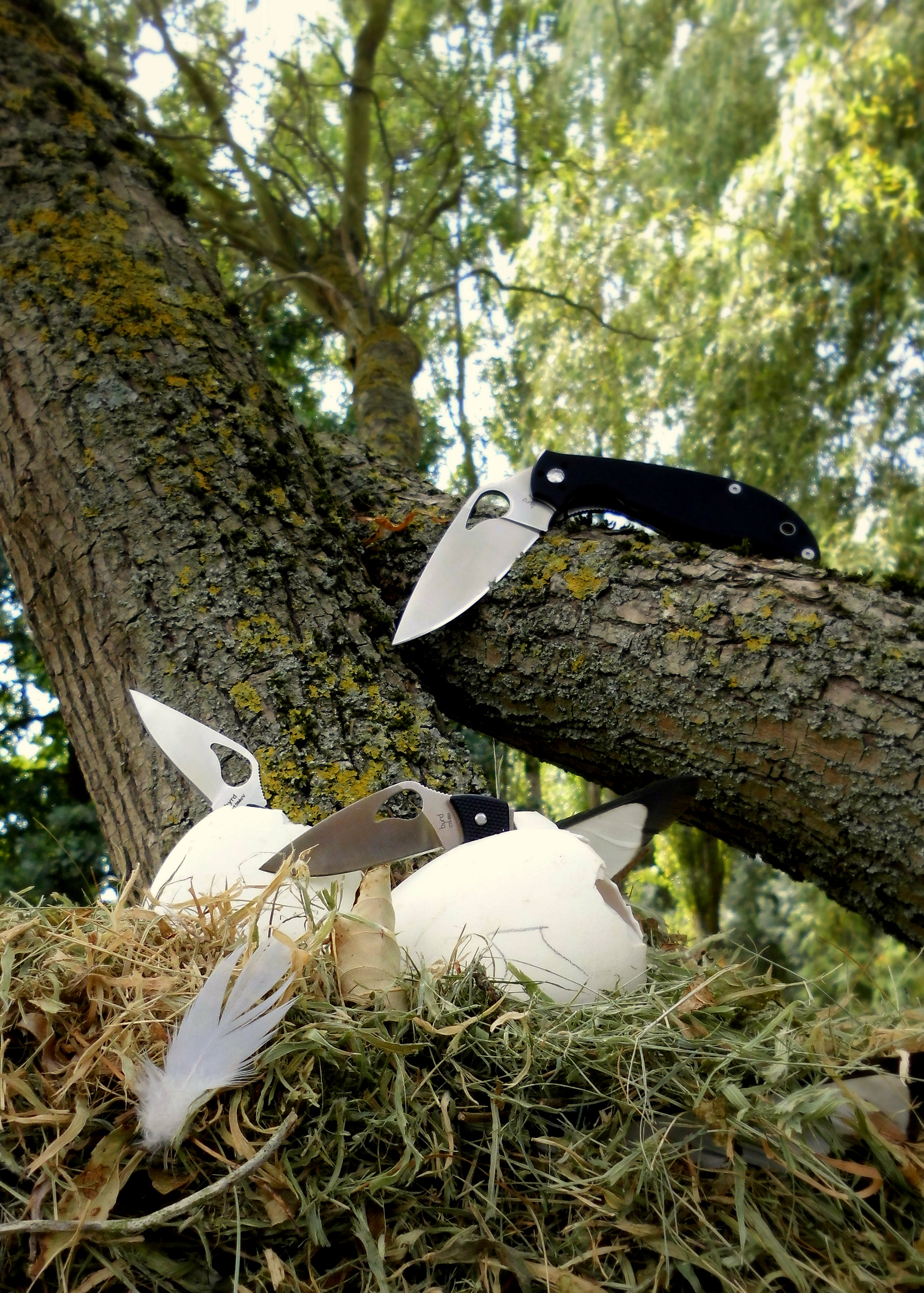 Thanks again everyone.
Cheers,

G_Shark, I have a similar idea of photography. The picture was taken a few weeks ago, so do not take offense at me.

* * *
Blades of the shape Hawkbill can be from different manufacturers, but most of all I like this shapes from Spyderco. This beautiful and predatory silhouette can not be confused with anything else. These blades can be large or small, plain edge or serrated, but even if they did not have a round hole, at first glance it's clear - yes, it's Spyderco! 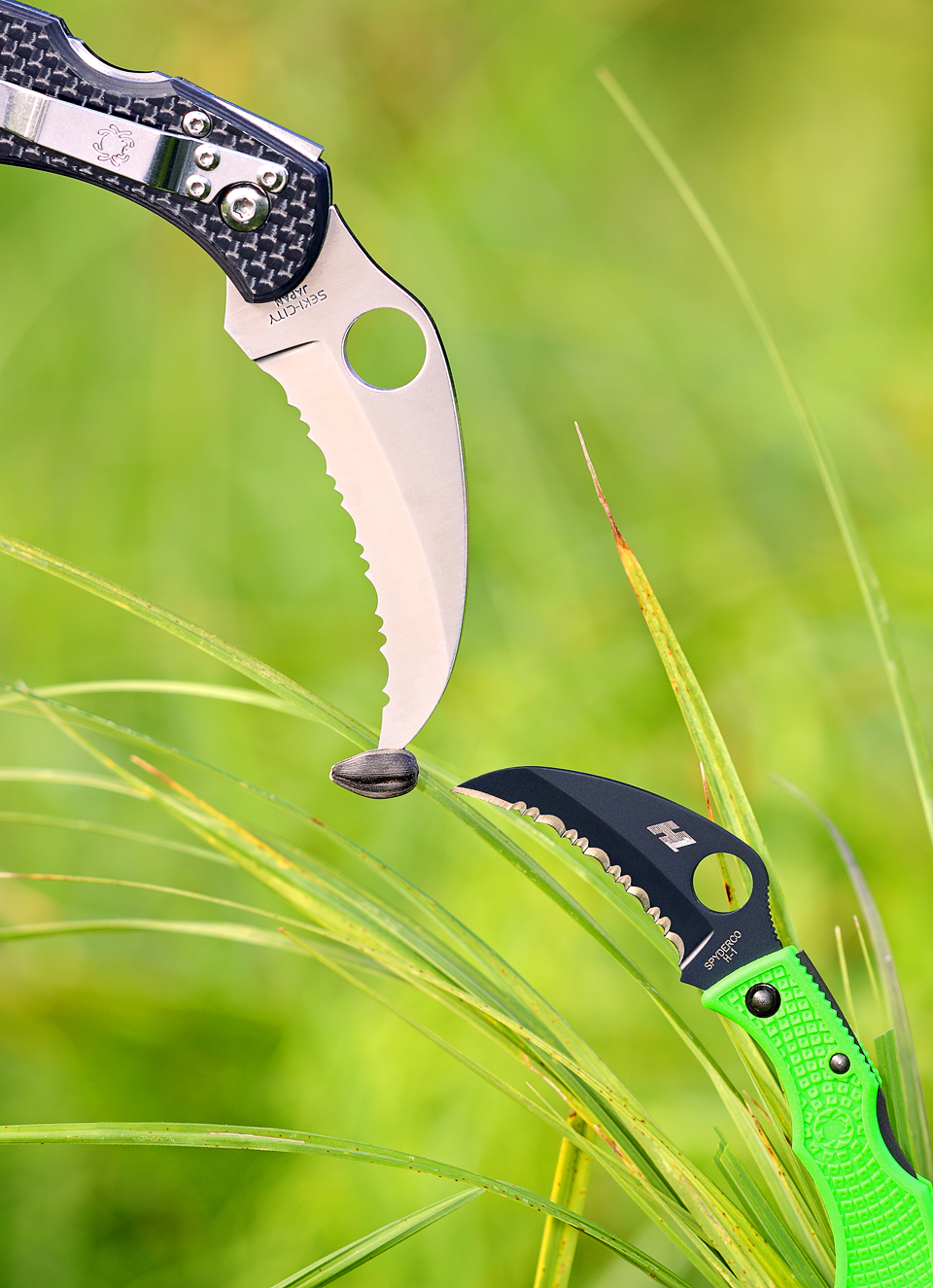 Terrific photos so far everyone! It's going to be a beautiful calendar this year.
- Connor

Why would I. That's a great picture you made there sir. Best of luck!
Top

The Photo was taken just for the Calender to show the daily 'Battle of the Bugs' for me ... always trying to decide which Ladybug I will EDC today! The Hawksbill makes a strong case as it is just so tactile to play with ... but the ZDP Bug always impresses with it cutting edge! And for the days I can't decide ... they can both come along

The wood is a block of 'Blackhearted Sassafras' I have been saving for a project. 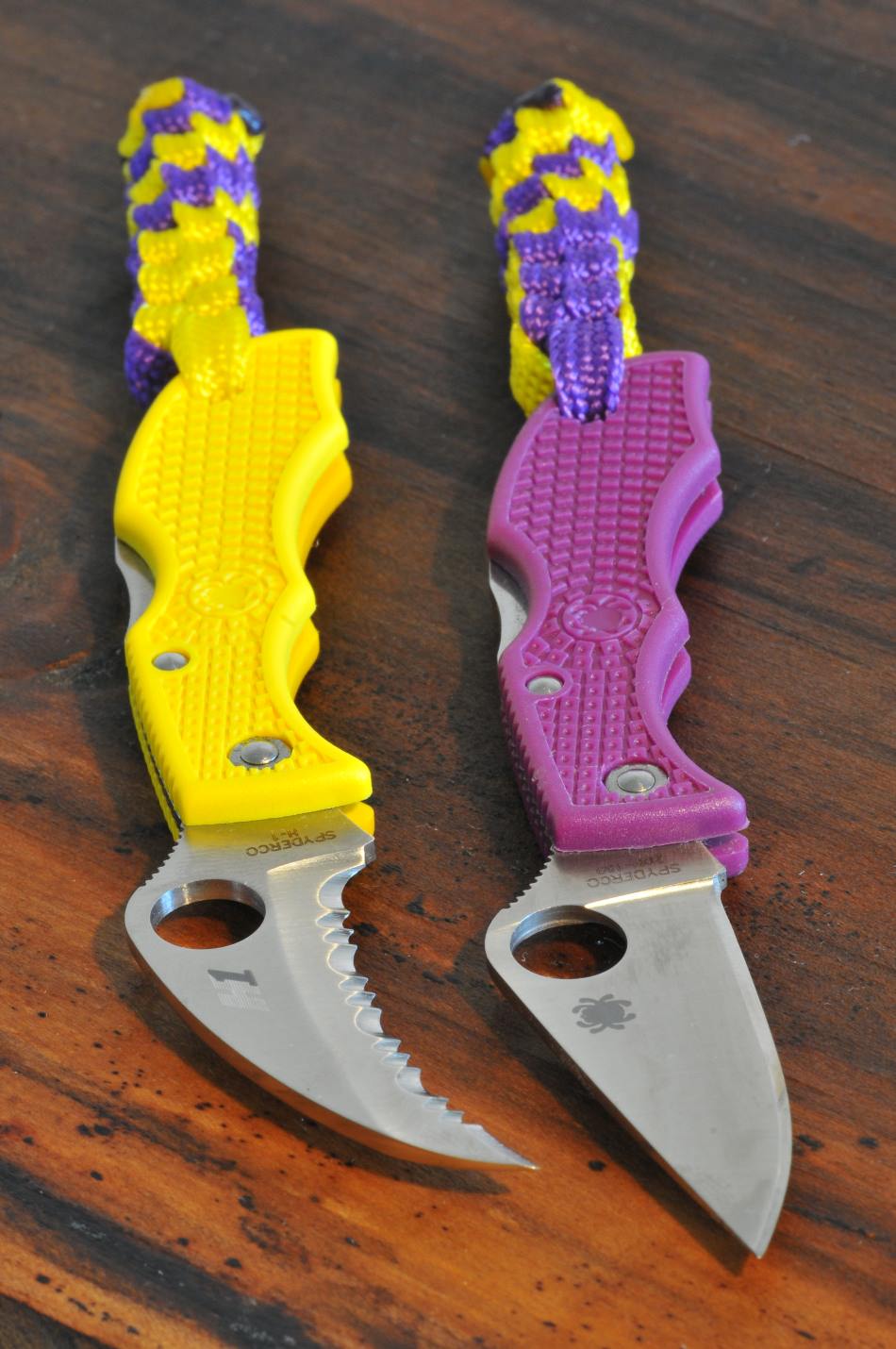 I'm entering this picture of my Spyderco Dragonfly with FRN scales. It is my newest knife and is very photogenic. I think it looks beautiful in a spring setting with a small flower bush. Thanks for the opportunity Spyderco, good luck everyone.
** I edited this post simply to better post the picture of my knife**