It's a slow day on the forum so I thought I'd liven things up with a Poll.

Pick a favorite out of these 5 Spydies. Why these 5? Just because

I know it's tough, but for this poll you can only choose one (you CAN change your mind though

I pick the para 3
3 inch ideal blade length, but maxamet or other great steels have g10 and not my hated dollar store looking frn, or it would be a tie with the native. I just ordered a s35 native to scrap the blade and keep the handle for my Maxamet. It takes buying 2 knives to make one goodbone.
Why the native is cursed with being blurple or frn or slick carbon fiber I have no idea. Being such a fine design, m390 with g10 or m4 with g10 or Maxamet with g10 are all winners, but alas, blurple or frn are the only choices.....I want the knife, so my Maxamet is getting the g10 off another knife.
Hence the para 3 is the same length but I can get a variety of steels that are great and get g10 every time.
“Putting fancy thoughts in a woman’s head is like putting lace on a bowling ball.....no good can come of it.” - Archie Bunker.
Top

Native... Only bc I want the new m4 exclusive
Top

So much to like about the Delica, especially the Delica 4. It has great ergonomics, the bidirectional texture is nice and grippy, 4 way carry options, time tested and proven design, but the number of blade options available was reason enough for me to vote for it. Standard blade in Plain, Combo, and Serrated, with or without TiCN coating. Also available with a Wharncliffe, Hawkbill, Reverse S, w/ Emerson Wave, 2.5" legal, and trainer.

On top of all that, it is offered in a number of different steel options widely available as either standard or exclusives, and is often sprinted! (VG10, H1, ZDP189, S30V, HAP40, Superblue, Damascus, Etc.)

Seriously? Those are all great choices!

My vote is based on “out the box” preferences of the 4 models I own.

Caly 3 - best out the box, love carbon fiber and the ZDP189, mine are not modified
UKPK - really love the thin blade stock, not wild about BD1 but my S110 version with aftermarket carbon fiber scales gets more carry time than my Caly 3
Native 5 - liking the linerless models a lot. The ergos of the Native 5 didn’t work for me until I realized that if I grind down the sharp peak on the back of the choil (like the Military or Blackhawk) it works a LOT better for me.
Delica - sentimentality my favorite but the ergos of the bumps in the handle don’t work for me. Aftermarket scales help but even then they get less carry than the 3 models above.
Para 3 - I don’t own one because of the thick blade stock and it has the choil that I’d need to grind down like I did with the Native. Compression locks have never really “clicked” for me.
Top

Caly 3 all the way. It just feels best in hand for me. I'd love a lightweight version, and I wish I could customize it with a lanyard or custom scales, but it's still my all time fav. Not all that practical a choice, though, since it's not a current production model and there aren't many easily obtainable options for folks who don't already have one.

Native is a close second, though, and that one *is* both a current production with a lot of options as is, and a lot of recent sprints, and is customizable to boot.

I picked the Delica, then changed my mind and picked the Caly3. I love both. Now, if you had asked which one would I buy the most of, it would be the Delica, hands down. It is cheaper and has great features, and is lighter weight. The Caly3, however, is heavier duty, feels great in the hand, and is nice and trim with better steel.
I Pray Heaven to Bestow The Best of Blessing on THIS HOUSE, and on ALL that shall hereafter Inhabit it. May none but Honest and Wise Men ever rule under This Roof! (John Adams regarding the White House)

Para 3 any day.
Smooth action a joy to open and close.
Perfect size and weight.
Cool that there are so many variations already available.
Hope more to come!
Top

UKPK for me. Pretty close between that and the Delica. In the end, the extreme lightweight and ergos do it for me. Especially with that choil. Love it.
Top

Like my children, I love each of them equally.
Top

I picked the humble Delica as I believe it’s one of the best bang for buck knives on the market.

Caly for me : I like the extra heft over the UKPK, but yeah, give me any one of these and I would be good for life.
Top

Really hard to choose between the Delica and Caly 3, but since I am a "blood brother"

to the Delica, I'll have to stick with it.

Before getting the smooth green G10 Native, i'd have immediately voted for the Para 3, but I can't decide anymore.

I have multiple Caly 3's and Natives, but voted UKPK based on most accumulated carry time, and because there's no Chaparral option.

I have to say Caly 3. It's just a superb knife. In this general size range I would also throw in the Mantra, it's basically a Delica flipper with better steel and a bit nicer overall.
SHARPEN IT LIKE YOU LOVE IT, USE IT LIKE YOU HATE IT
~David
Top

Delica all the way. Good ergonomics and bang for your buck ratio.

That said I carried my Caly 3 this week at work and was reminded what a great knife it is. 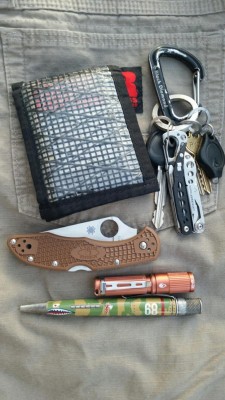 For me it's the Delica; this design was one of my first Spyderco knives and it's a classic, and I can get one in pretty much any color, steel, edgetype and grind!