by Candyman
So on many different forums we hear this word "grail" pop up. To some it means a knife that they cannot afford at the time. Some it means one that is dang near on the verge of impossible to get or hard to get unless you want to fork up some serious cash. Others are just "unicorn " status so to speak. I've decided to put a couple knives in the pot that I truly think are "grails" and I'm hoping you guys will throw your two cents in on what you think are grails as well and past that I'm not even opposed to a debate on why you might think the ones I chose do not meet that criteria. Here we go

1.The Cranberry Lum. No one seems to know the exact amount because it didn't actually make it into full production but there are reports of 2 so far. It is very "hush hush" who actually owns them though.

2. Laguiole- they pop up on occasion but are extremely rare. No Spydie hole. Becoming harder and harder to find in pristine condition and with the sheath as well

3. Dinosaur Bone executive- 30 made and given out to friends, family and knife makers by Sal.

4. Rainbow Cricket- a Japanese market only knife that I have still not determined how many have been made. There our reports that at least 600 were made (from what I've heard) but to be honest I've only seen 2 or 3 different pictures since I've been collecting.

5. ATR Black PE- I'd say it speaks for itself. Out of all the ATR's that you see come up for resale how many are the PE version. I think I've seen 3 in the past 5 years.

I do not know nearly as much as some of you guys so also if my words are inaccurate let me know and I'll fix it.

by brj
My personal grails would be the S125V and the 2000 forum bug inlay Millies.

by RadioactiveSpyder
The cranberry Lum came up for sale on eBay in February 2015. Sad to say my bid wasn’t the winning one! 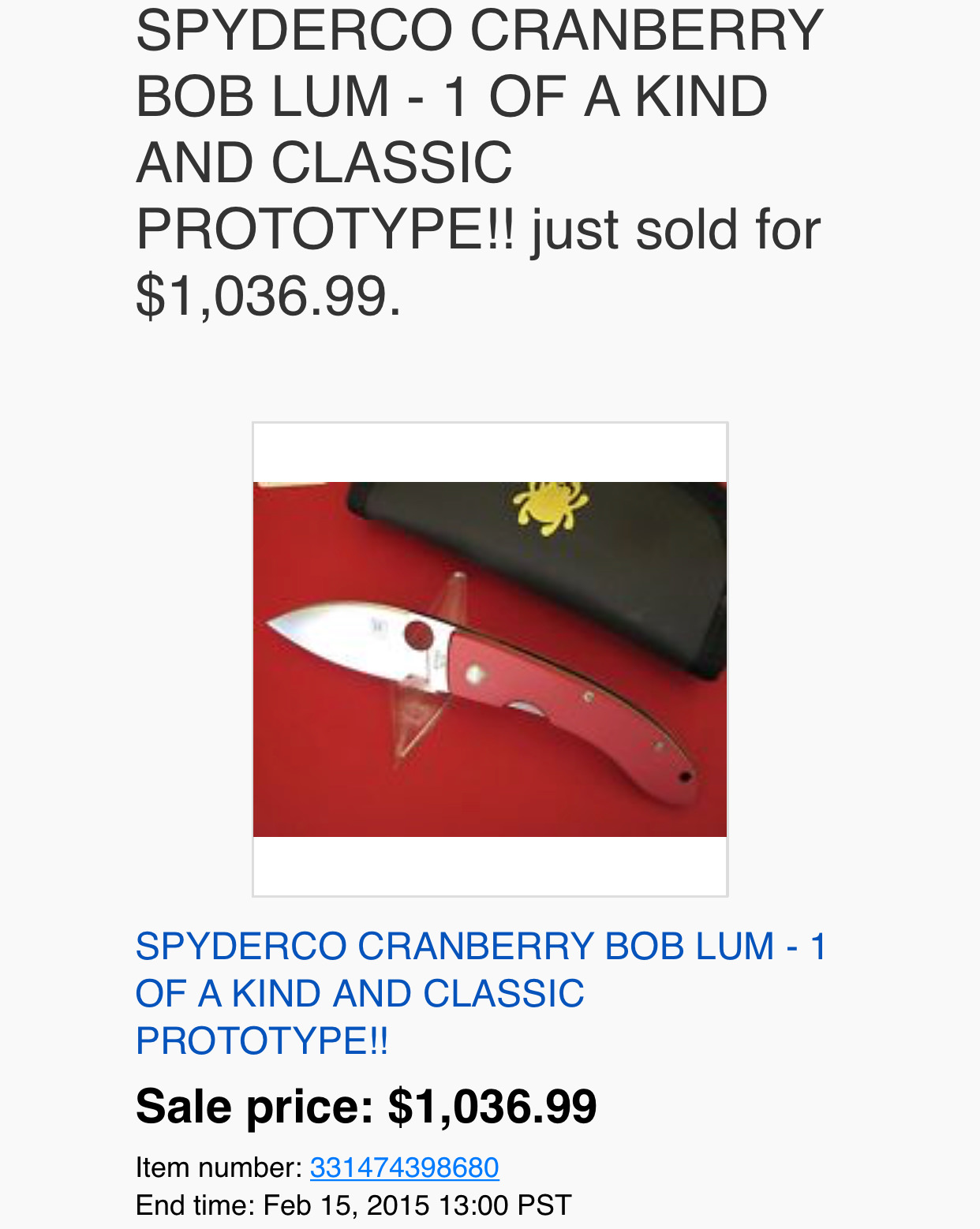 The Laguoile knives I see with some regularity on eBay (several per year in both edge configurations). I’ve seen pics of the dinosaur bone Executive (don’t you have one Rich?) but not of the rainbow Cricket.

I bet the Deacon might have a bit more to add.

by vivi
I'm pretty lucky to be honest. All of my grail knives, I own, or I don't want to own them anymore. For example at one point the foliage green C95 Manix was a grail for me, but the Manix XL DLC is a better knife in my eyes. At one point I wanted a PE black ATR, but the ATR 2 will have superior grip, a better clip, and a lower price.

As far as I'm concerned I have the best selection of production knives money can buy, bearing in mind my preferences. I'm not one for collecting, so if it isn't a superior user, it's not going to be a grail for me.

The only exception is that I'd like an H1 Catcherman to try out, but I'm not that worried about coming across one. I'd buy a Ronin 1 if I found one for a good price, but I'm 100% happy with my Ronin 2 so it's a very low priority. To me, hunting down these models isn't worth the hassle it entails, when current production offerings meet my needs.

by Ric
The problem with Grail things is, that, if you have it, the next Grail waits around the corner.

Luckily my "Wishlist" things are not that expensive.
Maybe the grail things gets less interesting the older you get.

by ross8425
Grail for me is a sebenza. Not really rare, but way more than I spend on knives. Maybe this year !

This is a partial list of "grail" Spyderco knives, "KSO's" (Knife-Shaped Objects), and project prototypes that I have had the privilege to handle in person, which I would love to own:

Sometimes, I wish there were 52 shades of grey hats to be donned there. I mean, for example, the Civilian, Matriarchs, Warrior, Pygmy Warrior, Restricteds, etc., are in no way, shape, or form utility knives. In many respects, Sal pioneered, among other things, the depth and breadth of the modern folding (fighting) knife, starting with the serrated Police Model.

Thus, with the Byrd line being brought online to cater to a wider audience, I think Sal should launch (or allow me to lead [Dream job! Haha.]) a "Q Branch" line, so to speak, to focus on taking long-shelved and "abandoned" projects and bringing them to fruition and into the light of day. In fact, it would be even cooler if the knives actually incorporated "letter 'Q-shaped' holes" in the products! (N.B., I don't carry any Spyderco knives that are tasked for the cutting of apples, not that there is anything wrong with the cutting of fruit.)

If the genesis of the name "Spyderco" was to embrace and embody the spirit of Spyder-series of race cars, then it stands to reason that Spyderco should have a special design team/line solely devoted to creating a Spyder-series of ultimate performance knives. (I'm not speaking of sprint runs of existing designs with super steels or exotic slabs. Rather, I am referring to "radical", single-purpose blade designs, which some have glimpsed, and have dreamed of owning ever since.) But I digress...

by Liquid Cobra
I used to have grails but after chasing them for a few years I managed to aquire them all. I learned that if you want it bad enough you’ll make it happen. If they’re hard to find, just keep searching. I learned some tricks from RadioactiveSpyder in that department (thanks pal). If they’re expensive, save up or sell knives you own. The reality is, if you want it bad enough, it’ll happen. It just takes effort, time and money.

I’ve had knives I thought were grails come up that I always thought were grails, but when push came to shove I didn’t jump on them because I’d have to sell some stuff and didn’t want to. I realized they weren’t actually grails, so I let them go and moved on.

My big Spyderco grail was the bento box exclusive blue m390 Paramilitary 2. I knew I didn’t want to buy one on the second hand market so I pestered bento box shop once a year asking them to do a third run. They eventually did and I got my grail. I actually bought two from them. That was the last Spyderco I was really hoping to find. Now I just look forward to the new stuff they put out.

That said, I’d love to add a janisong to my collection. I’ve had the opportunity to do so many times but the knife is illegal in Canada so it’s not an option for me. Now that I think about it, does that make the janisong my ultimate Grail since it’s completley unobtainable?

by Archimedes
Grail for me did not have so much to do with being rare as much as the knives just seemed like really great examples of Spyderco's. My three main grails were the 25th Anniversary Delica, The original Walker, and the original Spyderco R. Not super rare, but rare enough.

by Evil D
Besides maybe a Vesuvius or Ayoob I don't really have any grails, I have dream models and steel/material combos that haven't happened yet.

by wrdwrght
I'm thinking Moki is where some Spydie grails may be laying in wait for me.

by xceptnl
I have always thought the hummingbirds were kinda grail-like. I have seen very few pop up on the secondary market and when they did, it was too rich for my blood. The Jess Horn original was always rare and a grail as well

by ZrowsN1s
So I guess I'd define "grail" as a knife you would like to own, but for any number of reasons... you can not. This could be too expensive, too rare, or in the case of the Janisong too illegal

My grails have been, super blue DFly, 40th anniversary, super blue Delica, Yojimbo and Ronin 1's, PE Civilian, my current is the fluted CF native that I intend to do a maxamet blade swap on

by SharpieB
I am lucky that I don’t HAVE to own a sprint or other rare knives just due to a different scale colour or steel/handle combination. All of the Spydercos that I want to buy are not what I would consider grails as they are all under $200, and obtainable for me due to not being rare and also fairly affordable. PM2, BHQ Manix 2 (if still around when I want to pull the trigger), Matriarch, etc.

A Hinderer or Chris Reeve would be a grail acquisition for me as I have never spent more than $200 on a knife and never seen either in the flesh. Very interested in seeing with all the fuss is about. Luckily I am really happy with my $100-200 Spyderco and Benchmade knives.

by Larry_Mott
Now, i am not condescending, but to me a grail is hard to come by regardless if you're Bill Gates

I don't know what to call knives you simply don't have the funds to get but are otherwise not really that hard to get.
Personally i am lucky enough not to have any Spyderco i have a burning desire to own. .There are some i'd like, but i can wait until/if they show up at a price i can pay.
Lots of interesting Spyderco grails/unicorns out there, but i don't feel i *have* to own.

by colin.p
When I bought my first "current" knives, I thought $30 knives were expensive and anything above that was unobtainable and grail-like. Then I went up the ladder so to speak and bought increasingly more expensive knives.

For me, my grail was anything over $200 CAN and the Benchmade 940 was way beyond my reach. Well, I have one and several other fairly "expensive" knives and I find that they all have a place in my collection. I now have 2 Spydercos and plan on more, but it is a fun ride.

by zhyla
I dunno, there are so many good knives out there I don’t worry much about knives I’m not willing to pay for. I would like a Rock Lobster some day though.

One of my favorites is the reverse S SE meerkat. Which I scored at a swap meet a while back by chance. Sometimes you find out something is grail quality after you buy it.

by Evil D
Thought about this a little more, still can't think of any other Spyderco's but I do remember reeeeeally wanting one of these.

That Gunner grip pattern is just beautiful. It's also a great steel for a Strider. Even still I could do without the blade coating.

I'd also jump all over an Insingo if they'd give it a thumb hole.

by Tdog
I have most of the Spydies I want, but sure wish I'd picked up more of the Kopa's when they were available. Very beautiful knives.