I've got a couple of these little gems.

I EDC'd one for ages and still do occasionally. The other one I squared the spine off sharp and replaced the original cord with Jute twine that I Bees Waxed and I use it as a striker for a ferro rod, to make small feather sticks and all things fire making when I go walk about and if need be I can always unwrap and fluff up the waxed Jute and I'll always have tinder in an emergency. 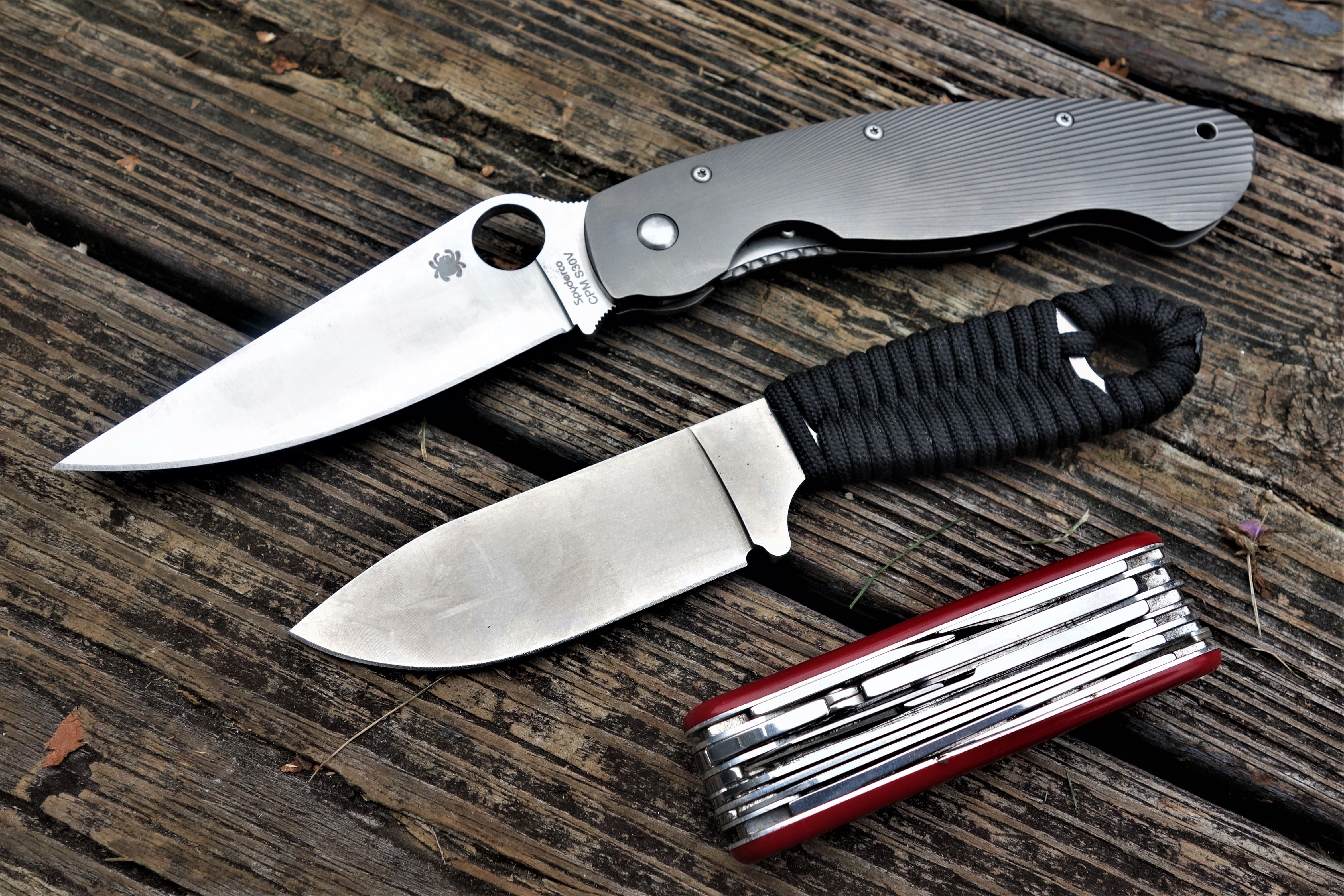 Added a fixed blade in (just got it in the mail last week). It is right around 5.5" long. 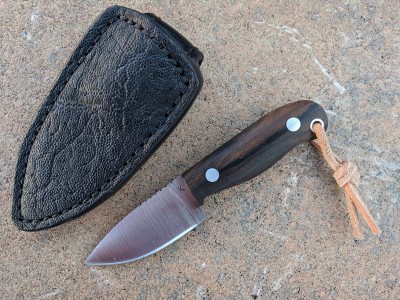 Having trouble switching this version of the Mule out. Not aure if it's the steel or the scales. Worked beautifully last night in the kitchen. Full size Lionspy and my BK24. 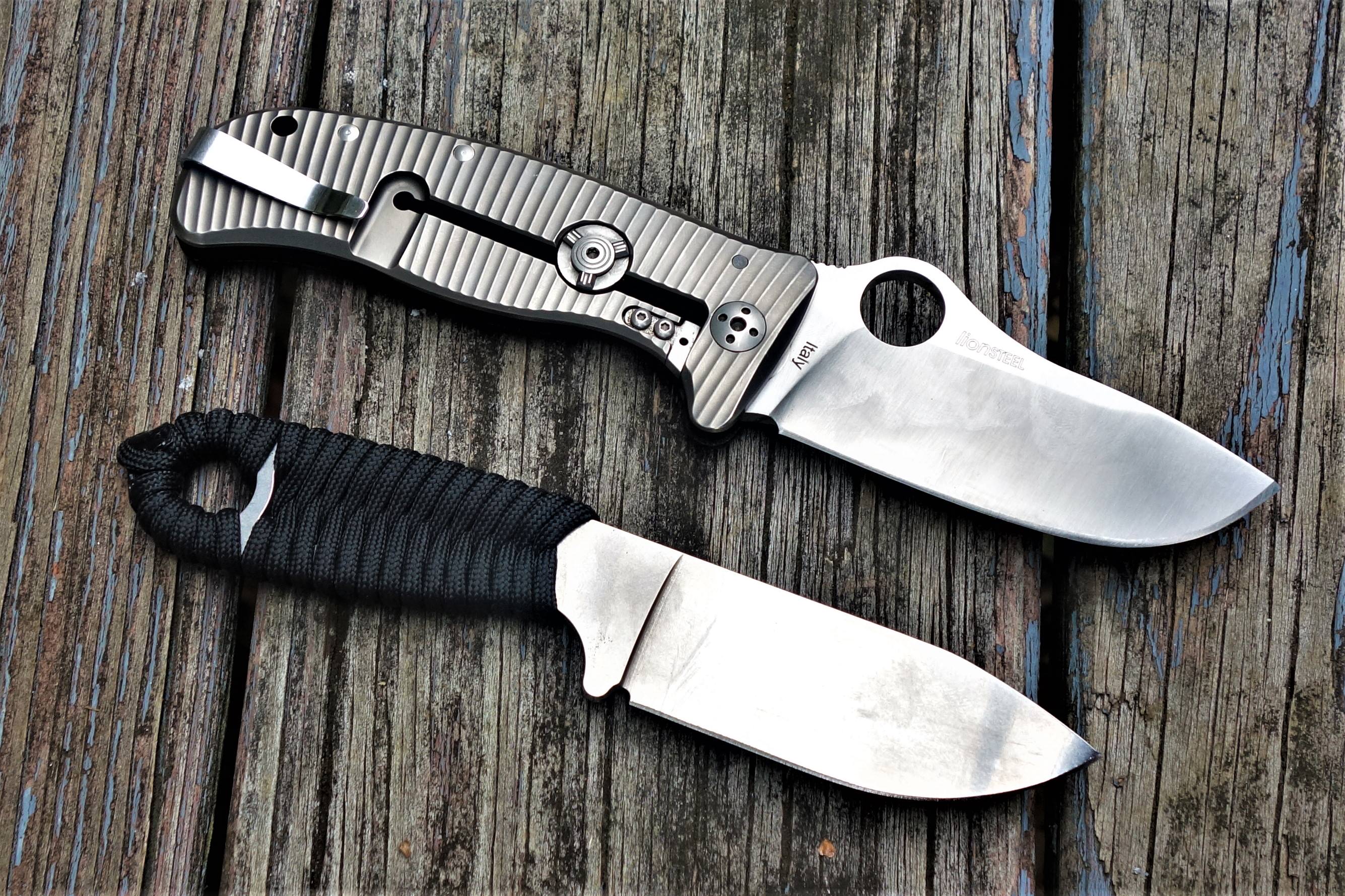 How do you hold the BK24 without being cramped for finger space or losing the pinky altogether? I sold my D2 version because I could not get a comfy grip. But it sure is a lil tank!
Top

I have no issues with it. I wear large gloves but don't have really meaty hands. If it was any shorter I would have issues but as is it is just right. I have always had it cord wrapped like this and it works fine for me. You must have slightly bigger hands than me. I find the regular Izula handle too small though.

I haven't actually used this one in D2 much but I have a BK14 which is 1095 that has been used and sharpened more than almost any knife I own. I actually carried it everyday for over a year. It has been to four foreign countries on vacations and with me on remote backpacking trips in multiple US states. It has field dressed deer and cleaned fish. It has been on overnight snow cave trips and on beach camp outs. For outdoorsy stuff it is the best neck knife I have found. It is a great knife. It is definitely robust too.
-Darby

I had the cheap "zytel" scales for it and could never warm up to the grip. Maybe the cord gives it a different feel? I am fine with the Delica and Urban. Online it says the handle is 3.75 inches, but that does not make sense in my head. Oh well, glad you enjoy it! It is definitely a great value piece.
Top

I have never used the zytel handles. Not every knife fits every person. People can be quite diverse and our hands are no exception. I think that is a big obstacle for knife makers. This knife's predecessor, the bk11, doesn't fit my hand at all and many people seem to like it.

The 14/24 is almost the exact same size as the Srteet Beat. Which also fits me well. I am a big Sreet Beat fan too.,I have just had the BK14 much much longer.
-Darby I think this challenge will become standard carry for me. I can't express enough how much i enjoy carrying a small FB and knowing i have a solid tool when the need arises. 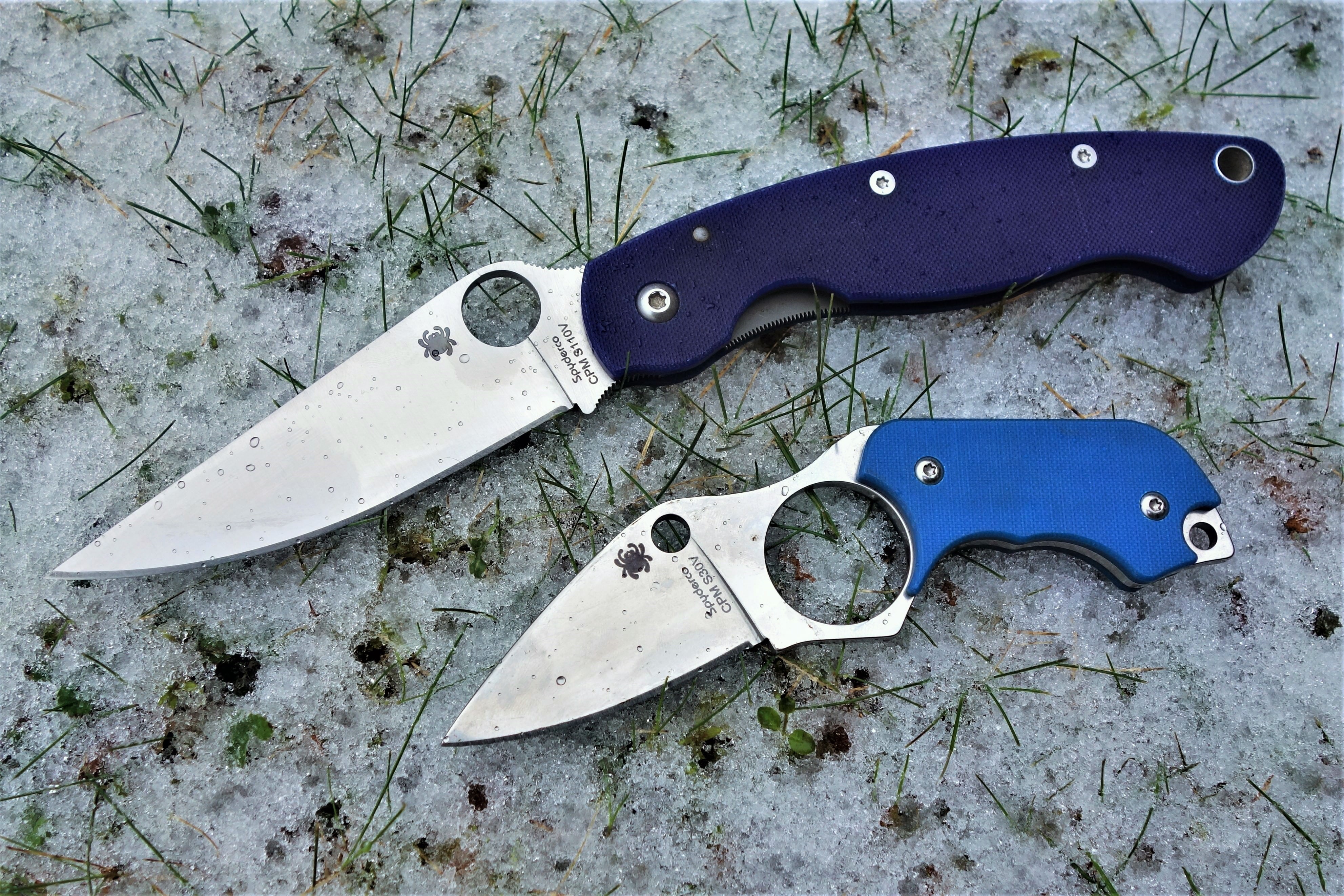 Over the weekend this was my carry. 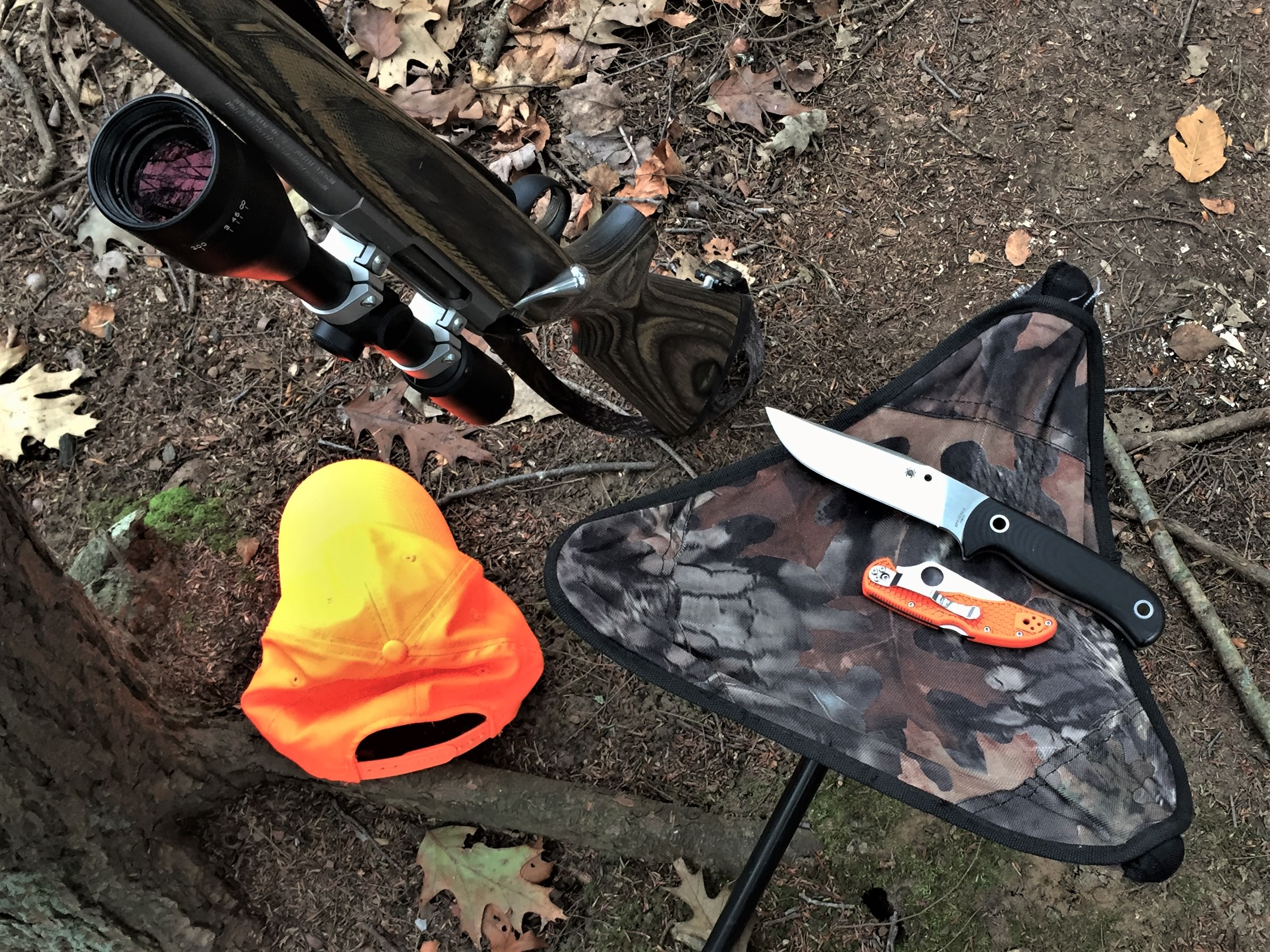 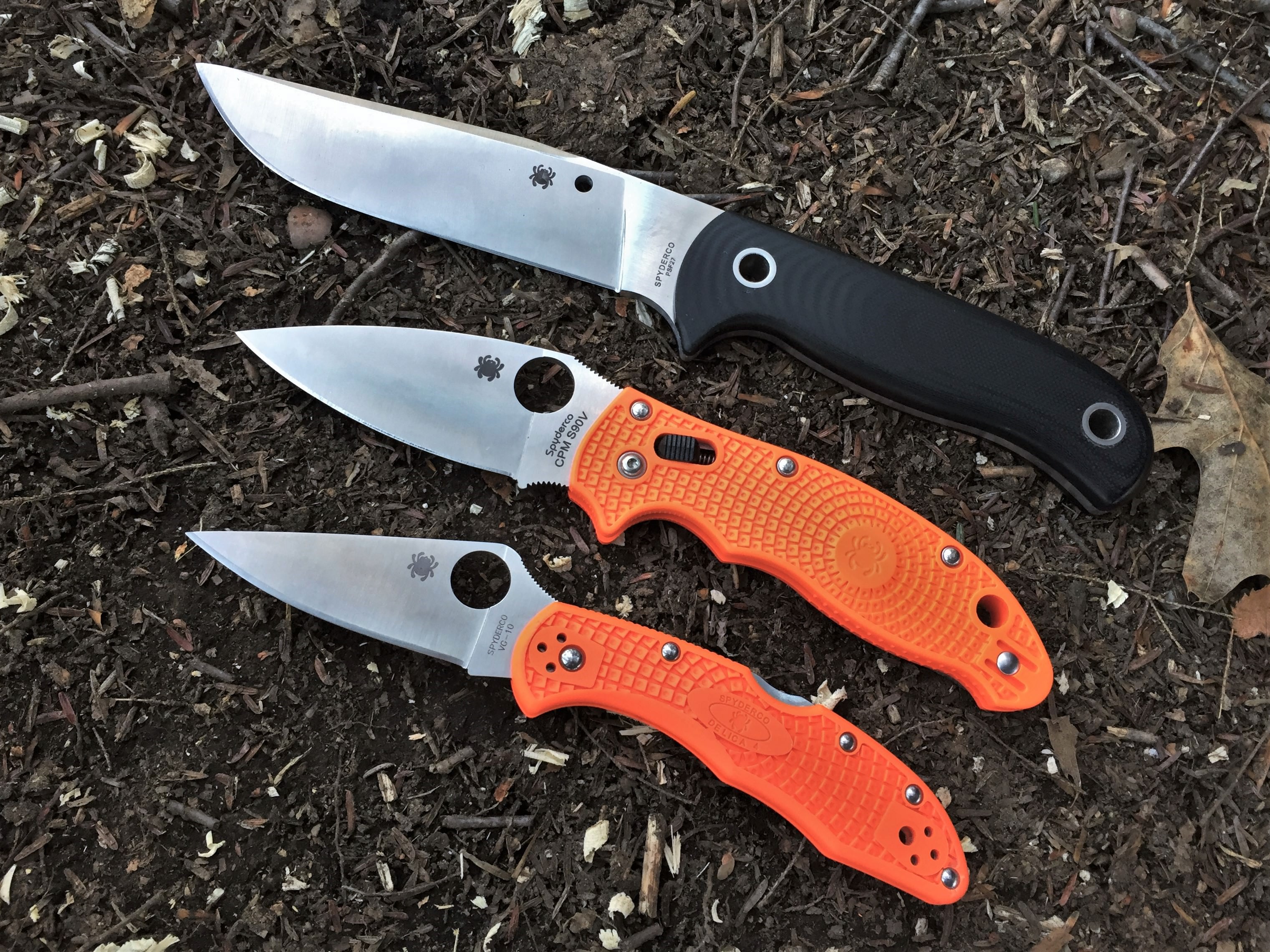 20 days in and I am still very pleased with the small fixed blades in my EDC. Today it's back to the Terrell 3FC. I was happy to see this thread. I'm glad to know there are others like me that like a small fixed blade. Finding the right fixed blade for EDC carry is tricky enough, carrying it everyday is even more of a challenge. I do a lot of backpacking in wilderness areas that do not allow open fires. A lot of National Park wilderness areas and nearly all of the Sierra Nevada Mountains above 10,000' don't allow fires. So, for about 18 months I've been slowly developing and testing a fixed blade design concept intended for backpackers that adventure into areas where fire isn't allowed.
When this thread began I started thinking about how to make a pocket sheath for the backpacking prototypes I'm working on. A pocket sheath would be much more helpful for EDC carry than for backpacking. I made an initial prototype that worked well and carried comfortably but it was fugly. Prototype 2 is a little better looking, but there's still a lot of cosmetic work to do before I have a design I would call "finished". That said, it works well and I have been carrying it all day, every day for 3 weeks and I forget it's in my pocket. So, I thought I'd show those of you that are interested EDC'ing a fixed blade. Anyone interested in making their own is welcome to copy my design for there own personal use.
One day (hopefully sooner than later) I will have my lite-fixed design fully realized and I hope to present it to Spyderco for consideration. For now it's all just a big W.I.P. 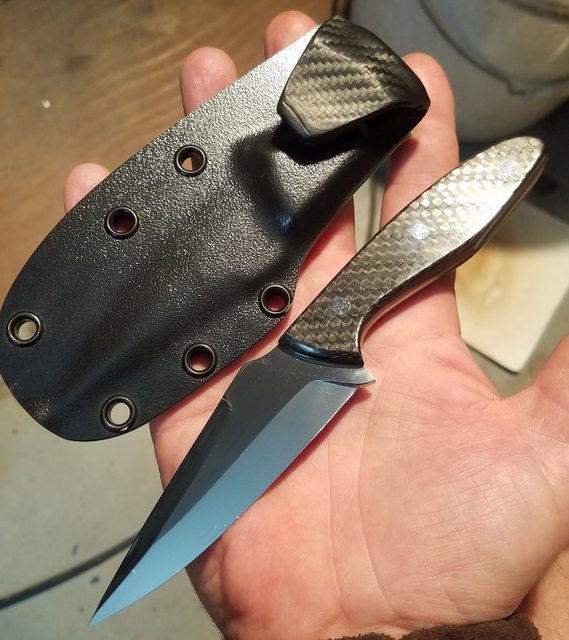 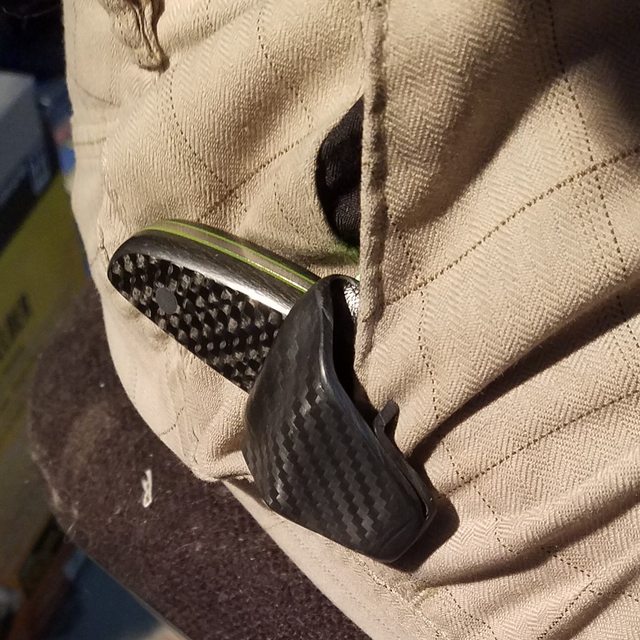 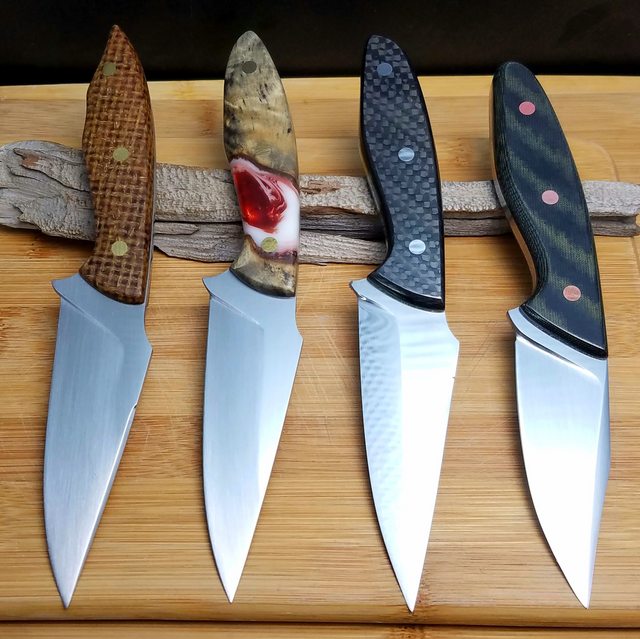 Very nice blades. I like them a lot.
Especially #2 going left to R.
Top

Wow Chad, those look amazing! All of them! I am assuming we are seeing some of the evolution of the design in that last pic? Very cool! I see that the handle, grinds and blade shapes are slightly different in each pic. I'm curious, which of the handle shapes do you find most comfortable?

I also have a question about the knife with the CF handle in the first pic. Would you call that a saber grind? Almost looks like it would perform like a scandi. I would think with that relatively steep primary bevel you could take it to a near zero grind and still have enough steel to support the edge. I'm not typically a fan of saber grinds (at least not on folding knives) but that looks like it could be quite a capable performer for "woodsy" type chores. Plus it just flat out looks good, which never hurts.

Beautiful knives, all! Thanks for sharing!
Top

Also, that pocket sheath is looking really functional too. Just the right amount of knife sticking out. I'm wondering if that would be comfortable for IWB carry? Is there a slight curve to the sheath? If not, could one be made that way to sit flush against the body?

Sorry for all the questions. You've definitely piqued my interest though!
Top

MacLaren wrote:Very nice blades. I like them a lot.
Especially #2 going left to R.

Thank you! I'm curious what appeals to you with that one if you don't mind telling me..is it the blade grind or the handle material?


Surfingringo wrote:... I am assuming we are seeing some of the evolution of the design in that last pic?

Somewhat of an evolution. 1-3 left to right were drawn at the same time and I was making small changes to the handle shape as well as the grind. Since they were only .105" thick they are extremely "slicey" The first was nearly full flat and the best slicer I've ever used but, I was worried it wouldn't be strong enough. The next was a high flat grind that provided a little more meat to the spine. The third was a test to see if I could make it a saber grind with a big swedge and still maintain the easy slicing. The 4th was a new direction for more information. Thicker steel, but skeletonized with a full flat grind and a swedge to keep blade weight down. It has a smaller (3") blade and a slightly taller handle with slightly more contouring.


Surfingringo wrote:.. I'm curious, which of the handle shapes do you find most comfortable?

None of them are uncomfortable but from most comfortable to least 4,2,3,1 at the moment. However, 3 will be more comfortable than 2 after I go back and add more contouring along the entire bottom edge of the handle.


Surfingringo wrote:...I also have a question about the knife with the CF handle in the first pic. Would you call that a saber grind?

Yes it's a saber grind. With that low grind on 20CV I was able to take the shoulder behind the edge down to .008" and it's still tough enough, and slices like a razor. It outperformed all the others by far in cardboard and rope cut testing. If I was going to continue to make this model in .105" thick steel I would stick with that saber grind for sure. However, It's looking most likely that my final design will use .140" thick M390 and/or 4V in which case my grind will likely be closer to the one with the stabilized wood & resin handle (#2 L-R).

After 100 6" box cuts and 100 rope cuts through a dirty 3/4" nylon rope it still sliced paper (although not super cleanly). After 10 passes on each side with 600 grit stones it was back to hair shaving again. 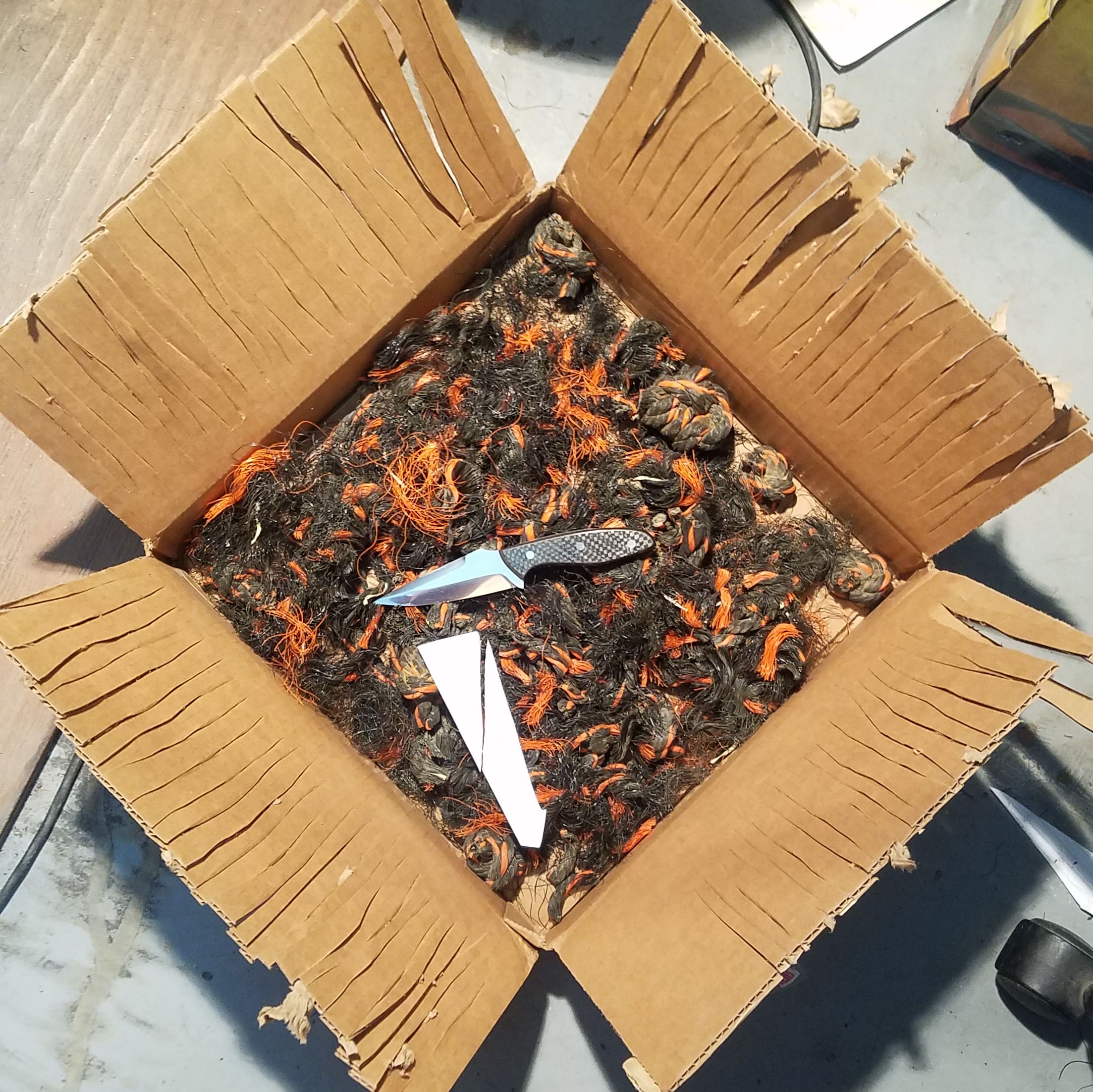 Surfingringo wrote:...Is there a slight curve to the sheath? If not, could one be made that way to sit flush against the body?

There is not a curve in that sheath although the sides can be curved away. I must say though..molding a sheath to the knife and then doing all of the other bends and folds without affecting the "knife pocket" has been a royal P.I.T.A. The curve you are thinking of would be easier than some of the bends that make the "clip".

Thank you very much for the kind words!