At this point I don't care about the handle color. Dye is too cheap and Spyderhawks are too frickin rare

Eventually a FFG PE in a high carbide steel would be fun though. That or with like a Merlin sprint.
Top

Blerv wrote:
Eventually a FFG PE in a high carbide steel would be fun though.

Im always Up For an H1 Spyderhawk. Been using mine Since They were released. I'd Probably Buy atleast 3.
Top

dsvirsky wrote:ANY color and I will buy (at least) one in SE. Last time, I picked one up in PE and, while it's my go to "yard work" knife, SE works so much better for those sorts of tasks.

I wonder how many of us use the Hawkbills as our dedicated gardening folders...

I cut a cherry tree out of it's 10 gallon bucket today with my spyderhawk. It punches into and through the plastic so easy. I immediately remembered why I love a good hawkbill in the yard.
Ryan

“Every created being is so constituted as to be capable of vice and virtue. For he can do nothing praiseworthy, if he had not the power of turning either way.” - Justin Martyr
Top

I'd take any Sprint as long as it's still using the old slim volcano grip handles.

That's nice, I do really like those oldschool grips and love the slim linerless design of the current Salts. I thought the new new Salt grip might be a bit too thick for me. That way at least I'll have a bit of time to get some extra Salts before the entire series gets rehandled.

(guess I was thinking about the Tasman with the smaller handle

I just got sample of the first piece from the new mold. It's actually very nice, still light, a little thicker, but the better directional texture is nice.

sal wrote:I just got sample of the first piece from the new mold. It's actually very nice, still light, a little thicker, but the better directional texture is nice.

I held something similar at the Spydiemeet and it is great but I have a soft spot for slim handles and this oldschool FRN, I would for instance love it if a Sprint would be made with the old style Delica's & Endura's 3 so I did lean towards the old Salt handle but I can definitely see this should be an upgrade for many.
Top

I'm in. Any color OK, but orange would be nice.

Got some carpets to cut up.
Top

I've for a long time would have liked to have seen a G-10 handled Spyderhawk. But after listening to everything that's been said and especially Mr. Glesser chiming in and informing us about the higher costs of the G-10 and so forth I will be content at this time to see the return of the Spyderhawk with an FRN handle.

But I would very much wish that they would consider offering a Spyderhawk model with at least a newer blade steel like LC200N or maybe even one of those newer Japanese blade steels like the ones on that thread with a similar title. But I would love to see how LC200N performs in a Hawkbill especially and also to see how it stacks up against H-1 being that it is a nitrogen based steel like H-1 is.

If someone were to market the Spyderhawk and TASMAN models in a major gardening mail order catalog like "A. M. Leonard" or some other company that caters to the gardening, landscaping and botanical trades I think Spyderco would truly have a difficult time keeping them in stock. Because everybody that I've loaned one of my Hawkbills to that was gardening all loved them and wanted one for themselves.
Top

Are these shipping yet?

This is taking forever....
Top

Any comment on the final steel, handle color, PE/SE choice for this run Sal? Looking forward to this one. 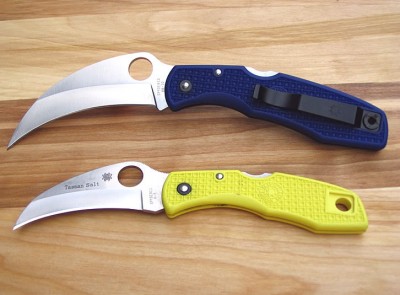 ZrowsN1s wrote:Any comment on the final steel, handle color, PE/SE choice for this run Sal? Looking forward to this one.

I like the look of this vg-10 one a lot.
Spyderhawk1.jpg

You're going to hate me "Zrow"

Because I've had a "user" blue PE, VG-10 Spyderhawk since 2005. And believe it or not I actually use the blue PE Spyderhawk about twice a year. I'm actually surprised to see someone put up a pic of it because you just don't see those very often at all. Now the one I got has a chrome/stainless pocket clip instead of the black one on yours. However I've seen them both ways over the years which confuses me because I think they only ran that model less than one year.

Actually I got my "user" blue PE Spyderhawk already used or I probably wouldn't ever used it as rare as they are. But I do like the VG-10 PE unit better than I do the PE H-1 unit because it stays sharper much longer IMO.

I like the idea of the color coding of the handles and I hope to see more Hawkbills using that method of identification in the future. I got a feeling that they will if they start using LC200N in some of the newer Hawkbill blades.
Top

I found that pic in an google search, I believe that one is a Blade Forum 03' knife. I posted that pic as a visual reference because you are right JD, there aren't many blue PE spyderhawks out there, mostly all you see is the yellow SE in Spyderco hawkbills. I am starting to develop quite a collection of Yellow and Orange Handled spyderco's, I was hoping for a different color (and plain edge)

I'd still buy one in SE Orange because I've been wanting a larger Hawkbill for a while, and I'm sure I will still love it, I was just hoping for a little variety from the many Yellow/Orange handles and SE hawkbills.
I ❤ The POLICE

Hoping to see some H1 Spyderhawks this summer

We have the process started, but it usually takes longer than you (or I) like.

“Every created being is so constituted as to be capable of vice and virtue. For he can do nothing praiseworthy, if he had not the power of turning either way.” - Justin Martyr
Top
Post Reply
354 posts