Okay, here was my other design proposal all those years back. This one was a definite no go as Peter had told me the Tusk was apparently on the drawing board even back then. I didn't know it was the Tusk at the time but he told me Sal already had a rigging knife design that had been around for a while.

My concept was to do it as a Slipit since rigging knives traditionally were slip joints, and it would allow more universal sales in places where locking blades are prohibited. Which I thought might be handy if you were a sailor traveling between ports. For more general use I also thought it would make a great woods folder. I love the marlin spike for working with knots and find it handy for poking at stuff that I don't want to risk poking at with the tip of the knife blade

I think once again I found a weird niche that I thought was handy but in hindsight wouldn't end up having enough universal appeal to really be considered. But my buddy Tom did another amazing job rendering my idea anyway so here it is 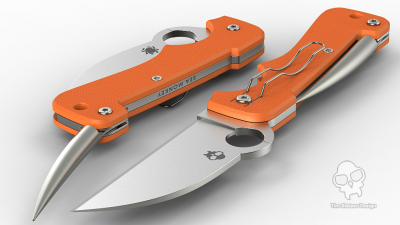 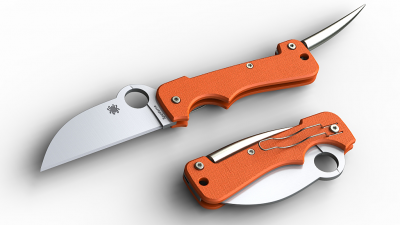 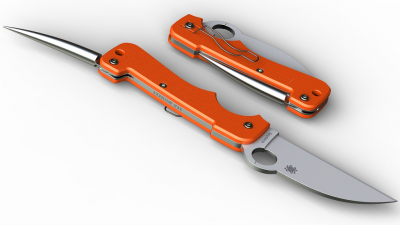 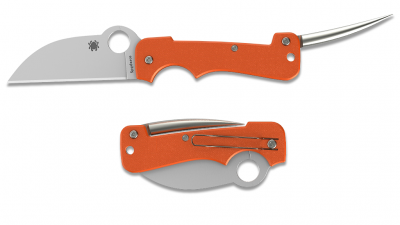 Nice design! I would like it in H1 or LC200N, with serrations or part serrated, if possible. And some checkering or Volcano grip on the handle.
Top

Very cool design! I don't have a use for it but it is a very nice design and I can see a market for it.

I love it! But would prefer a pointier tip. This seems like it would be an awesome knife for mushroom gathering... using the marlinspike to poke at stuff I don't want the blade to touch.
Top

Correct. Would have been traditional and kept it legal most places in the world.
Tim
Top

I'd probably buy it. Lack of a lock on the blade wouldn't bother me, but I tend to be a bit more reckless with a Marlinspike. No edge to cut you, but having a finger pinched by the spike folding while you're working the point into a knot would not be much fun. Even so, it looks like it would come a lot closer to my price range than the Tusk.
Top

I dunno. Not sure what kind of price range something like that could have ended up at. I would def think less than a Tusk but I'm sure blade steel would be a big factor. Something H1 would have been appropriate although I guess if I was pushing for that I should have had my rendering done with yellow handles

To me, with such a wide blade, it wouldn't be comfortable to grasp when using the spike.


As merely a tiny jest, if it had dual locks, think of the mall ninjas you could dispatch.

Nice renderings. Do you know which rendering software your buddy used for this?
Top

Its cool looking but I'm not a fan of heavily defined finger placement. I would rather impose my will upon the knife than vice versa.
Top

Blade width was 1.5 inches but much of that protrudes from the handle when closed so the actual handle with spike folded would probably be closer to an inch or so high. I wouldn't think it would be too bad but again, that's the benefit a manufacturer has working with a knifemaker rather than just some dude who came up with some designs, they could actually handle a physical prototype and know if it would work well or not.
Tim
Top

I don't really care if a rigging knife has a locking blade since it will only be used for slicing rope and bait. The spike on the other hand is nearly useless if it doesn't lock. Also the sheepfoot blade seems like a poor fit for boating applications. I would think a drop point would give more edge for rope cutting and better surface contact on a cutting board.
Top

Could be Seber. I based it on traditional rigging knives that commonly had sheepsfoot blades and no locks on either blade or spike. I figured those folks had more time around boats than me

There's certainly an argument to be made that a modern version could or should be different though. I've used some originals (on land, not on a boat) doing rope work and didn't have any issues with the spike not locking. I like them for camp use and think they make a nice companion to a fixed blade. I actually don't think most rigging knives, even currently produced ones, have spikes that lock although I know the Tusk does. Then again maybe there's a good reason the Tusk got made and this didn't!

I only have a couple of these type knives, but both of them and most of the ones I've handled have had locking spikes and non-locking blades. As for the choice of a sheepsfoot blade, a straight edge is less likely to slip off a wet rope than a blade with belly.
Top

You guys probably are right then. The ones I'd messed with and had didn't lock although they were all fairly old military surplus models. I thought it was the norm but it's looking like maybe I needed to do more research!

I don't really have any plans on trying to redo these designs and resubmit them anywhere else (which is why I figured it wouldn't matter posting them at this point) but it's def something to keep in mind if ever try anything similar in the future!
Tim
Top
Post Reply
16 posts • Page 1 of 1