Thanks for the pics! Very interesting knife
Top

yep...I am screwed.. Gotta have one.
Top

I've been looking forward to this design since it was first announced. So far I'm fairly impressed. Just to caveat, my last few EDCs over the past year and half have been "higher end" mid-techs and productions (Shirogorov, CKF, Strider Performance Line and Fantoni). I say that because this will be the least expensive framelock I've purchased in a while. Despite having owned and carried many higher end production knives I've always defaulted back to the humble Spyderco Pacific Salt due to the corrosion resistance.

I primarily carry PE blade and use all my knives for basic daily cutting tasks. I usually have a knife clipped in my pocket or IWB 10-12hrs out of the day. I probably carry IWB more than in the pocket which makes corrosion resistance a must for me. In the south I sweat a lot and have experienced rust on just about every production model I've carried IWB. The SpyderChef combines the ergos and blade shape that are most useful to me. It's also lightweight and highly corrosion resistant. I like that it has PB washers. The stonewash finish is a little darker than I prefer but it's a user for me. The handle feels good. Would have probably increased the cost but I would have liked contoured scales like the Slysz Bowie. Construction and finish-wise, I would compare this model to the Sage 2.

I'm going to put this one in the rotation for a few months and see how it does. It was a hard choice between this blade and the Magnitude that is also in stock at SMKW...

Can anyone say how it compares to the Bowie?
Handle looks more flat. Bowie seems to be highly recommended.
How is the blade shape? Tip pretty usable?
Top

I am a HUGE fan of the Slysz Bowie, and the Spydiechef shares it's DNA to a degree. The size/weight is very similar, and the ergos aren't as far off as the less conventional design might make you think: 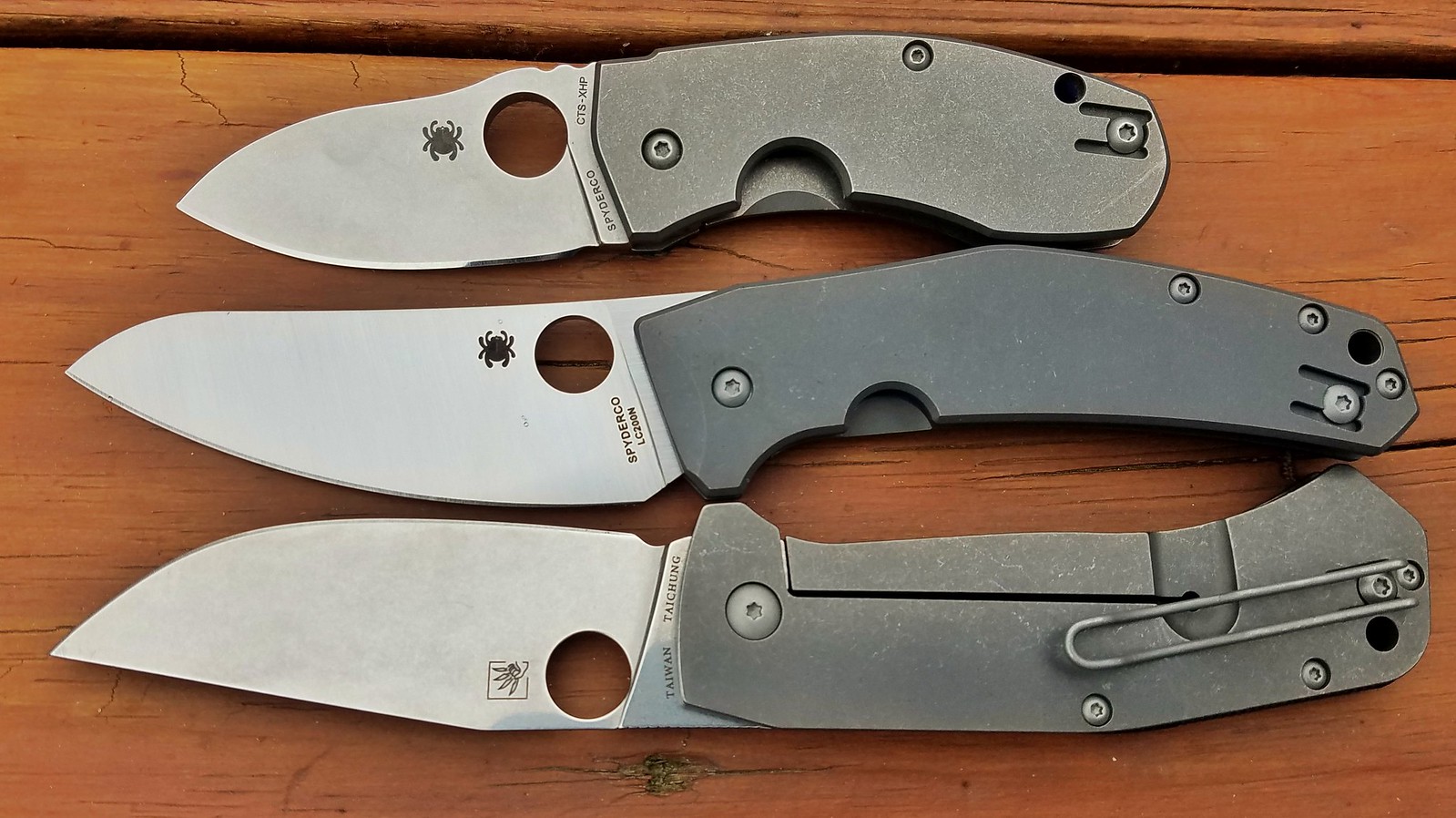 The Spydiechef lacks the contoured handles of the Bowie (

), which perhaps keeps it more accommodating of different food-prep type grips. The matte finish of the handle is less polished and almost tacky, which is much better when wet than the Bowie or Techno.

Slysz designs, this one has open back construction instead of a backspacer, which I initially thought was to aid in cleaning. However, the amount of standoffs and lanyard barrel complicate washing bits of food out. Probably a non-issue, but the K2 is the biggest folder I own and is held together by just two bolts. This would've been an ideal situation to try something similar IMHO. (Marcin's designs seem to usually have 3 bolts in back and a lanyard, despite the Techno vs Mouse, so this may be a signature of the design.)

Minor detail, but the cutout for the opener hole and lock is noticeably smaller, making both processes feel a little more exacting. 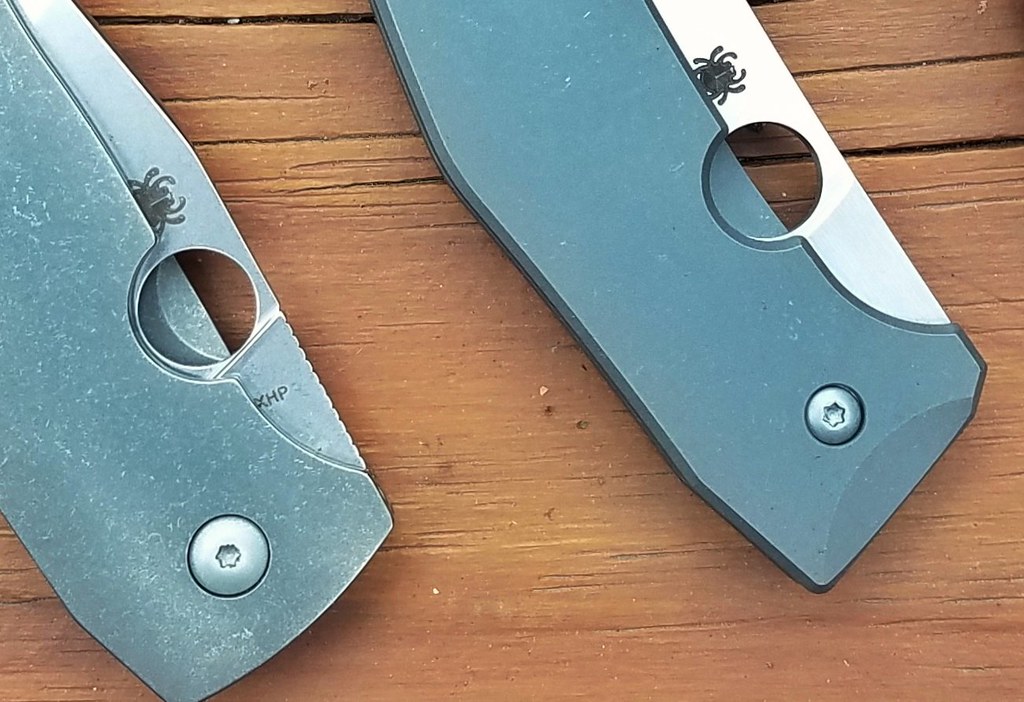 So far I really like this knife. It has a very nice balance and the blade/handle angles feel much more natural in hand for most cutting tasks than pictures may suggest. I spend way too much time using knives like my GB1 in the kitchen (which admittedly makes no sense), and really look forward to using the Spydiechef for what it was designed.


THX Much for your fantastic pics.

Your 'Slysz comparison review' here is awesome. I totally agree that 3 stand off looks like too much, even could be obtrusive when cleaning food inside the knife, but since I don't pretend to use the SpyderChef as a kitchen tool it's not a problem to me.

Of course I'm getting one for sure, once you get some Slysz designs in your rotation you just can't resist the new ones.

I really like mine. My only gripe is that the lockup on mine is at about 80% already, and when dis-engaging the lock it's a little gritty almost. However, it's very smooth, and rock solid lockup still. So I am just going to use it until something develops then I will send it in. I don't think it will wear that quickly though. Here are a few pictures, they pale in comparison to abbazaba's

Thoughts, I love the steel, it sharpened to a crazy razors edge so easily. And I think other than the Nilakka this is the thinnest I've ever seen Spyderco grind a production folder.

The handle is very comfortable in my XL hands, and it's nice and light. Great for EDC.

Wow loving all these photos! Great shots everyone!


Amazing how similar it is to that Fantoni!
Going back to Caly.
Top

Man I just wish the blade angle wasn't so positive. I love everything else about this one.
SHARPEN IT LIKE YOU LOVE IT, USE IT LIKE YOU HATE IT
~David
Top

I reluctantly took the SpydieChef off my list when I first learned its blade was shorter than I'd hoped. But the photo comparisons here (thanks) reveal that its cutting edge actually exceeds the PM2 and Manix2, and, given the blade's shape and lack of choil, I now see abundant food-prep uses (among others). Back on the list.
Last edited by wrdwrght on Fri Oct 28, 2016 11:26 am, edited 2 times in total.
Top

We need the Swayback. So, so much.
Top

Ain't that the truth

!
I wouldn't mind seeing his Gen 2 Mouse in production either! I really love the sheepsfoot.
- Nick

Any idea why it's not stonewashed the same as the Techno and Slysz Bowie?
http://www.serendipity.li/more/myth_of_apollo.htm" target="_blank
Top

SuckSqueezeBangBlow wrote:Any idea why it's not stonewashed the same as the Techno and Slysz Bowie?

Abbazabba said its grippier...guess for traction in wet environments?
Top

SuckSqueezeBangBlow wrote:Any idea why it's not stonewashed the same as the Techno and Slysz Bowie?

It is much gripper than say like the Techno for comparison. It feels similar to a Sebenza's blasted feel, but not as aggressive because of the stonewash on it. I think it was either blasted or acid washed, along with the stonewash.
Top

Dang, I need one!

I'd like to say thank you to all who posted pictures, it gives a much better feel for the size of the knife! I'm really loving the lines on this one, and it looks useful in a way that very few other folding knives are. Spyderco and Mr Slysz really did a great job on this one.
The problem of a coherent civilization is the problem of living with ignorance and not being frustrated by it.
Top

I want this too. Where are they? Can't find em at any of the usual suspects.
Top
Post Reply
72 posts