I was just looking closer at my Starmate, and the detent ball doesn't seem to engage the blade at all when closed. There's no movement of the lockbar toward the blade whatsoever when the blade closes, like there's no detent hole or notch in the blade at all.

Looking at mine, the lock bar only seats about a hair into the detent. I might be able to fit a piece of paper between the scale and the lock bar when completely closed.
-Brian
A distinguished lurker.
Waiting on a Squeak, Pingo, and Cliptools with a Split Spring!
Top

Gino, I think you're right. The detent ball doesn't seem to line up with the detent hole.

Because most of this is hidden, I can't see how it is misaligned, but judging that my lock bar moves a little would make me guess it's on the front part of the detent cutout.
-Brian
A distinguished lurker.
Waiting on a Squeak, Pingo, and Cliptools with a Split Spring!
Top

If I don't see any news in this thread, I will probably grind (with my diamond triangle) some where the stop pin lands when the knife is closed. See if that helps.

The only problem looks like that I will have the possibility of messing up the end of the handle because it is so close.

GoldenSpydie wrote:I've never handled the newer version, but the old version is awesome. I've always liked the original....wish I had never gotten rid of mine

I can do that, but then, I won't be able to check progress easily.

I'm thinking painter's tape on the end of the handle.
-Brian
A distinguished lurker.
Waiting on a Squeak, Pingo, and Cliptools with a Split Spring!
Top

I might change my mind and take it apart for aesthetic reasons.
-Brian
A distinguished lurker.
Waiting on a Squeak, Pingo, and Cliptools with a Split Spring!
Top

I'm still trying to figure out what you're trying to do... are you going to make a new detent hole in the blade??
That doesn't sound like it'll work out well trying to do it assembled. Nor with Diamond triangle. Need a small carbide detail bit either in a dremel or drill press.

Not to try to push you into disassembling a new knife, but might be able to see more detail of the track for the detent ball when taken apart?
Going back to Caly.
Top

njlay wrote:Hi everyone,
First time poster here. Just got my first Spyderco (the C55G) in the mail yesterday, and I came across this forum. Not having any other Spydies to compare it to I can't say relatively the retention strength, but I would say from experience with other knifes that the retention isn't the best. My guess would be that the hole that the detent sits in is too small, or the detent ball doesn't protrude into the hole far enough. Either way, just stick with tip down carry haha.

Welcome to the forum, njlay.

You're definitely off to a great start with your new knife. Tip-down is actually how I carry my Starmate too. (But in truth, that is the only way the clip positions on the older version. Lol).
Hope to see you around!

So far so well! I don't really mind the weak retention. I've found that, along with a light lubrication (don't tell anyone but I used chapstick haha) on the bushings (synthetic bushings feel really strange dry) I can deploy the blade without even touching it! Makes for quick deploying which I like. Also, I like to fidget a lot and so far this seems to be holding up to my constant opening/closing. Nice knife! Any recommendations for a second spyder, probably a little smaller? (I've only had this for 2 days and I'm already hooked! haha) I can't really play down a knife this size as easily as I thought I would.
-------------------------------------
Just got my first Spydie (C55G) - Dec '15
Top

For a second Spyder (which will quickly turn into your third, fourth, and so on...

SpyderNut wrote:For a second Spyder (which will quickly turn into your third, fourth, and so on...

I've heard lots of great things about the Paramilitary 2, and from a few quick searches have found that the popular color options are very often sold out. Primary uses include mail & box opening, although having something more capable than a letter opener is always to be desired. My current list of knives (in the order I got them) are:

The Scallion is the first "good" knife I've ever owned, and it was a gift from my father. I still carry it sometimes. It's a shorter knife, only 2.5", but it doesn't have that "scary" factor that longer knives have so it's nice to have when I'm at the office.

The Shallot was my first knife purchase, and I fell in love with that knife. I love Kershaw's SpeedSafe open assist feature, though it does add to that "scare factor". Unfortunately I lost that knife last summer and it bugs the crap out of me. The 3.5" length seems just a bit too long for that style of knife, but I enjoyed it immensely. Something about that stainless steel felt really good.

To replace the Shallot I purchased the Scrambler, but that left something to be desired. It's bulky in hand and slow. The reason I was drawn to it in the first place is the blade shape. I really like the classic look of a drop point. Reminds me of the old folder my dad carried with him.

The Funxion EMT was originally intended as a gift to my brother, an EMT. Apparently he isn't very fond of carrying a purpose driven knife though, he just likes his cheapo $10 plastic handle Stihl folder. So after sitting in the junk drawer for a year I "inherited" it back for myself haha.

That brings me to this latest purchase, and my introduction to the Spyderco family, the Starmate. Great knife. Really like it. I guess what I would REALLY like for my next spyder, is basically this knife but .5" to .75" shorter. The only limitations I have legally is that it can't be an auto, which is probably a given since I think that's a federal law(?). I can open carry knives larger than 3", and conceal carry basically anything else.

Your story is similar to mine, starting off with a very nice Spyderco right off the bat. My first Spyderco was a Vallotton Sub-hilt. When it arrived, my reaction was, "WHOA. LOOK AT THIS THING!" It was like nothing I'd ever seen or held before. I was hooked right then and there. Obviously I'm a bit addicted to that rush that I felt holding the Vallotton the first time and the sense of satisfaction I get from it. Spyderco is still hitting home runs with their new knives so I still continue to get that feeling fairly often.
Top

I would recommend a Sage 2 for your next purchase. It has titanium scales (you seem to have liked the metal Shallot), and titanium is lighter and cool. It has the leaf blade, which is similar to a drop point.

Another suggestion would be the Native 5 (drop point and a variety of steels/handles), the PM2 (one of the ultimate Spydies), or the Delica 4 (variety of handle options including stainless steel.)

Be aware that the backlocks (Native, Delica, Dragonfly, Caly, etc.) will not have as fast/easy an opening as the other knives.
Top

My new Starmate is now one of my favorites, but I purchased it for an odd reason. My first name is Starley. I also own Star M45 and M40 Starfire pistols in the Starvel electroless nickel finish for the same odd reason. Here, is the M45 and the Starmate. 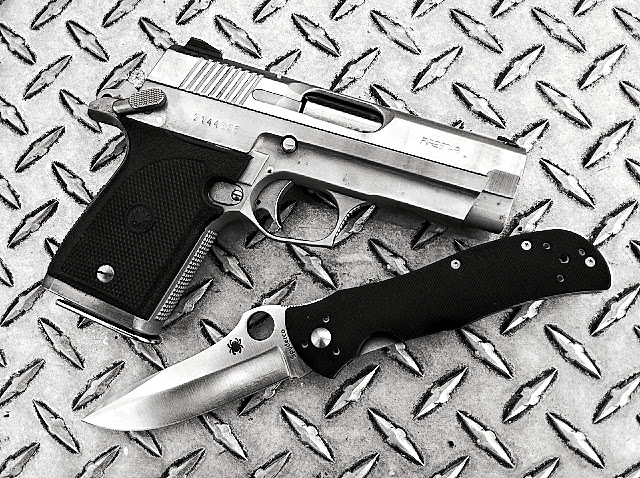 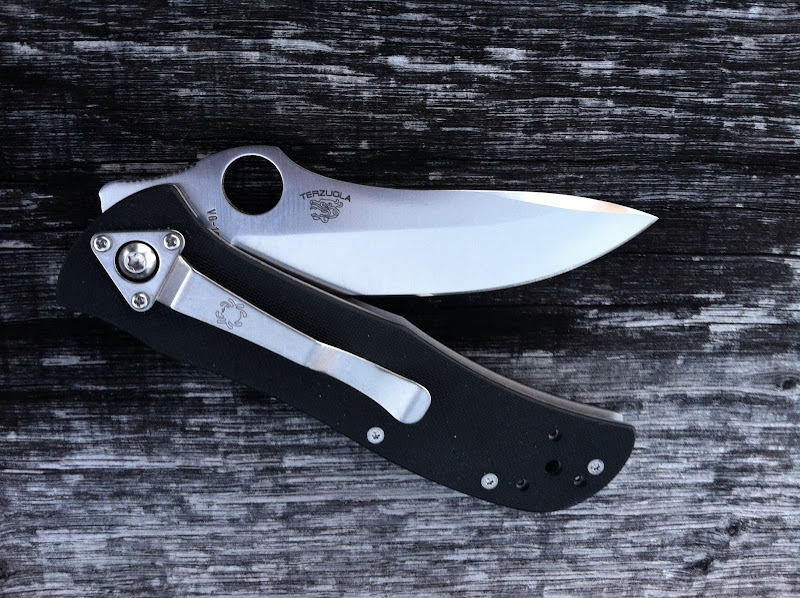 Not the cleanest (photo or knife) but here it is!
Starmate C55GP
Top
Post Reply
60 posts