What's your favorite?
"Two things are infinite: the universe and human stupidity; and I'm not sure about the universe." Words of Wisdom Albert Einstein-American Scientist 1879-1955
Top

As dumb as this will sound to many, the Caly 3.5 because I always have it making sales calls, am utterly familiar with it, it is quite capable, and it is benign looking. If you stuck an Endura blade in a G10 Delica handle and sent the resulting knife to prep school for a semester, you would have the Caly 3.5. I would have to say the Emerson La Griffe for a fixed blade strictly for SD. Its carnage to size ratio is off the charts!
Top

Fixed: Smith & Wesson H.R.T. Badge Knife SWHRT2B (serrated hawkbill)
Folder: Cold Steel Rajah II 62KG
Democracy is not freedom. Democracy is two wolves and a lamb voting on what to eat for lunch. Freedom comes from the recognition of certain rights which may not be taken, not even by a 99% vote.
Top

.
There are numerous threads on defence edc but tbh its a contentious issue as far as I'm concerned .
Sure I'd rather have a knife than nothing , I've posted before I've been attacked with a machete I have scars and the guy got hurt and a long sentence .
I've practiced Silat and that really didn't kick in just natural reflex is what helped then it crept in , I'd personally say train in a specific MA .
Learn what is basic if that's all you want or keep at it using designated knife like a karambit , after a discussion I had with someone returning to the dessert in oct .
We both decided and he's on his 3rd tour and seen CQC a long thick fixed , with a sharpened top swedge is a good all rounder .
Maybe if its a spyderco a warrior or a modded temperance although idk how or if putting a swedge on one would weaken it .
It is horses for courses there's no definitive answer for a multitude of possibilities , your local carry laws etc come into play etc ...ect.
Experience in real life scenarios training muscle memory is all good though and I'm just pulling your leg on the whale thing .
Its them **** crack squirrels you've got to watch out for

I don't prefer a fixed or folding. Sliders are way more effective IMO. The polished slider on my Kahr 45 works really well and I have never cut myself handling it!

xceptnl wrote:I don't prefer a fixed or folding. Sliders are way more effective IMO. The polished slider on my Kahr 45 works really well and I have never cut myself handling it!

xceptnl wrote:I don't prefer a fixed or folding. Sliders are way more effective IMO. The polished slider on my Kahr 45 works really well and I have never cut myself handling it!

Is "slider" a common term, or am I just very sheltered? I'd never heard it before today.
Top

Janfrederik wrote:Is "slider" a common term, or am I just very sheltered? I'd never heard it before today.

I figured that out after a quick Google search, I just wasn't sure if it was a commonly used term, or if he was just being witty.
Top

Janfrederik wrote:I figured that out after a quick Google search, I just wasn't sure if it was a commonly used term, or if he was just being witty.

I think it was this one

its called a slide.
Top

Yep, the HK USPc 45, then whatever knife I have if I can't outrun the punk.
Top

Janfrederik wrote:Is "slider" a common term, or am I just very sheltered? I'd never heard it before today.

A slider is a parachute reefing device: http://en.wikipedia.org/wiki/Slider_(parachuting)

For what it's worth, my summer EDC is also a Kahr, and it's never cut me either. But the slide on my winter EDC (G23) has bitten me several times at the range.
Top

I just posted this response in a near identical thread, but here it is again...

Typically this one, although it's not a Spyderco;

I do also carry a knife, mostly to aid in retaining my primary weapon;

Also a big fan of the Kabar TDI.
Top

It was ment to be a witty play on words.

I truly hope to GOD above that I never ever have to use a knife ( or even a gun for that matter) for self defense. But I am a fervent believer in the Second Amendment of the USA Earth Constiitution>> therefore I do have 2 Spyderco blades I carry when I feel that things are nor right or there is a potential for trouble that I carry quite often lately.

My favorite folder that I would want to deploy for SD is without a doubt my Spyderco C-60 Ayoob, G-10 handled Sprint version. The Ayoob was created by one of the foremost firearms expert and that being Massad Ayoob himself and Mr. Ayoob certainly had defense in mind when designing it. The ergos of that knife feel so natuaral that I would feel very confident with it if I had to use it for such an occasion should it arise. Not to mention it is one super outdoor, hunting and fishing folder as well.

In the fixed blade category I have a preference for my Spyderco Perrin Streetbeat model. Another blade made with VG-10 blade steel and another blade designed by a very revered man in the field of self defense as well as a prominent martial arts expert and that being Fred Perrin.

The Streetbeat isn't much longer than many of Spyderco's folders but it is very ergonomically designed. And again the G-10 Sprint Ayoob folder just has a feeling so natural that I can't imagine anyone designing a blade better than the C-60 Spyderco model. The Ayoob and the Streetbeat are what I refer to as my "VG-10 Dynamic Duo".
Long Live the SPYDEREDGE Spyderco Hawkbills RULE!!
Top

The only time I think about having a knife for self defense is when I'm in the sticks, and I'm not thinking about defending myself against other humans. In those cases I almost always have a fixed blade, recently it's been mule teams and before that it was a Benchmade Nimravus. The mule teams are nice because the edge is short enough to be legal everywhere in my state and obviously the exotic steels are fun 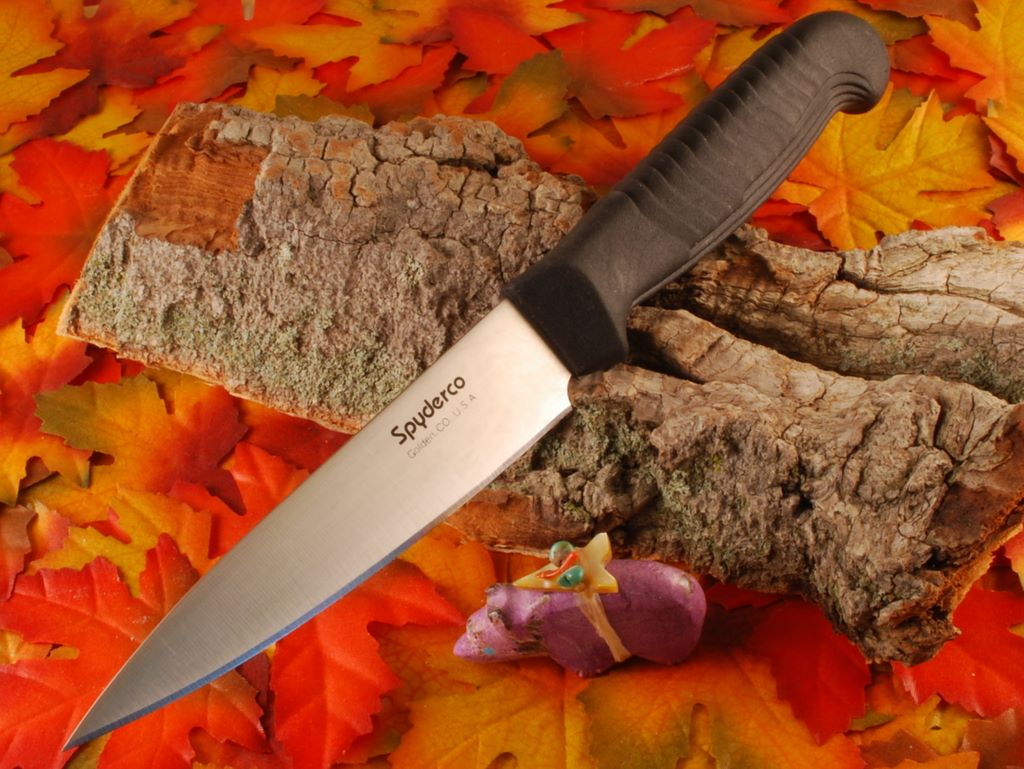 ...it protects me from hunger on a daily basis.

My Domino and my Raven combat cane. If I can't take the knife because of its a court house or airplane I can always have one of my canes with me. I also have Canemaster canes, one is my airplane cane its just a tough piece of Hickory and is none threatening looking but is super strong. Being disabled has two advantages one you get great parking and two you can carry a cane anywhere without question.

I Have A High Art: I Hurt With Cruelty Those Who Wound Me. Archilochus 650 BC.
Top

I think the best fixie is the SWICK 2, and the best folder is the bi-fold or the Introvert that will be coming in the future. Those knives are near impossible to strip from the hand, or dislodge, and the blade angle makes them very good for crossadas and MBC.
"Nothing is so fatal to the progress of the human mind as to suppose that our views of science are ultimate; that there are no mysteries in nature; that our triumphs are complete, and that there are no new worlds to conquer."
Sir Humphry Davy
Top
Post Reply
27 posts