What Features Do You Like On A Pocket Knife?

What Features Do You Like On A Pocket Knife?

I was wondering what features you all like on your pocket knives? I am not talking tactical knives, and I do have preferences for these. But I am talking about actual pocketable knives.

I like to have ambidextrous one hand opening and closing and top grade steel choices. I also like nice scales. G10 is awesome and comes in colors other than black. It can be polished, too. Bone is another favorite in smaller knives.
I prefer blades of not more than 3 inches and for general use I like a trim clip point or even a slim trapper style blade. This way I can cut fruit, open boxes, open envelopes, clean fish, and cut up a meal with one knife (after cleaning!).

What about you all?
Top

i like 3 inch blade also not too big and not too small perfect for my indoor and outdoor jobs. i prefer the g10 handle i like the way it feels in my hand and its not too grippy just right my dad had one and that made me want to get one
Top

I like lock backs, midlocks, flippers and 2-3 inch blades. Ergos are key for me, as is easy opening/closing. I'm a big fan of G10 and carbon fiber. I also enjoy FFG with a belly. Leaf blades are my favorites. That's why I like Spyderco, they have a lot of offerings in those ranges.
"Nothing is so fatal to the progress of the human mind as to suppose that our views of science are ultimate; that there are no mysteries in nature; that our triumphs are complete, and that there are no new worlds to conquer."
Sir Humphry Davy
Top

Plain edge blade is a must and, unless it's a DA/OTF auto, so are a Spyerhole opener, midlock, and 50/50 choil. Full flat ground blade and smooth stainless bolsters with natural scales are icing on the cake, but I'll carry pretty much anything except peel-ply G-10. For me, this one is about as good as it gets. 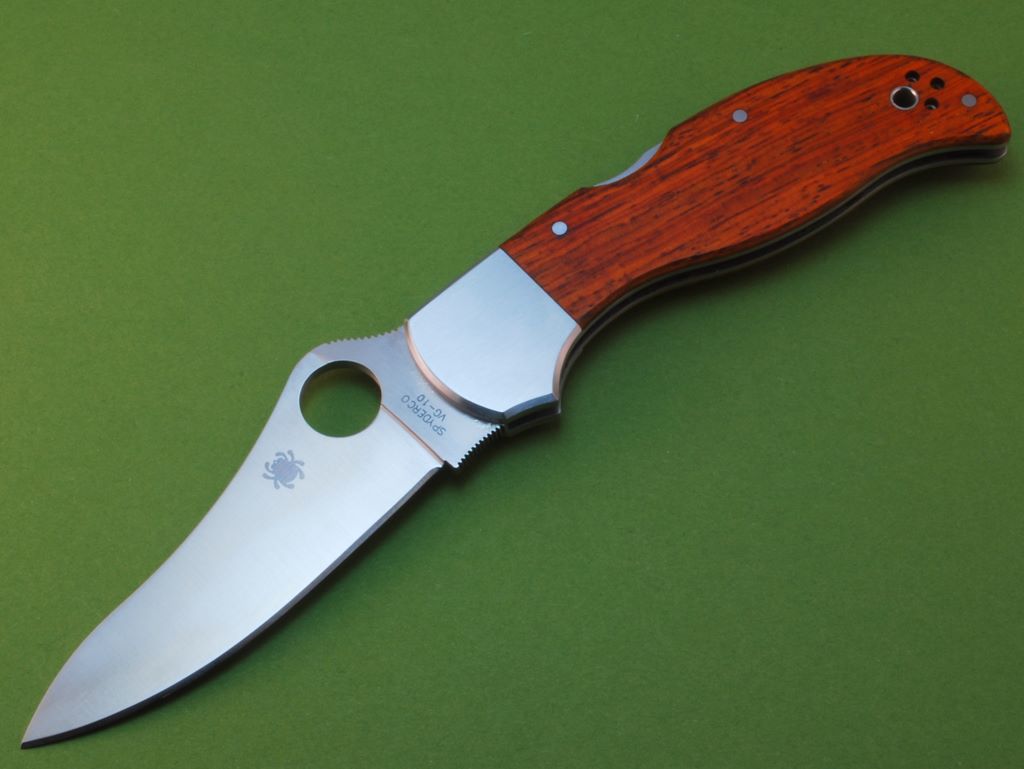 It has to be light like the Tuff, have a Spydie hole (larger the better) and be easy to hold and cut with. After handling the Tuff, the other knives don't really measure up to its status anymore.

I like a needle-sharp tip, a thin grind, light weight and a comfortable handle of modest size. Usually I have to compromise on at least one, but the Centofantes get a LOT of pocket time. Other favorites have nail nick opening and one doesn't lock.

My favorite feature is a deep carry clip.
-Frank


Delica and Endura are great knives! They're the low priced crack samples that'll get you hooked on spyderco! Feed the need!
-Michael Cook
Top

I like a knife to have a blade, preferably with one side sharpened, fold somewhere in the middle, and have some kind of handle apparatus at the opposite end of the blade.

Seriously though, i'm realizing i don't really have a cookie cutter taste in what i like and don't like. I used to think i did, but if you look at the knives i own they really don't have anything in common with each other except for the round hole.

-4 way clip option is nice, even though most of my knives end up being carried tip up. A few knives i've gone back and forth with how i clip them, so it's nice just having the option.

-I must say i prefer to have a compression lock over most any other lock design except maybe the captured ball bearing lock. The lock itself isn't enough to get me to buy a knife, but if two knives are similar enough, i'll take the one with the CL.

-I do like G10 over most other handle materials. I'd like to see more peal ply carbon fiber if it were less expensive. I'd also like to see a more aggressive pattern machined into the G10 somehow.

-I like deep carry wire clips, which is ironic since i only own one knife that has one. I can live with the standard hourglass clip though.

-I'm torn between thick blades vs. thin blades. I like the aesthetics/strength/pivot strength of a thick blade, but I like the slicing performance of a thin blade. I just don't like how thin blades feel under my thumb when using the thumb ramp.

-I usually prefer full flat grinds, but my Yojimbo 2 is helping me to learn the virtues of a nice thick blade with a high hollow grind. That way i can have the thickness where it counts but still be thin behind the edge.

-I have to have a good steel. VG10 is the bottom option for me, i really don't want a steel that holds an edge any less than VG10, no matter how easy it may be to sharpen. This is often what i'm torn with when considering Victorinox knives. I love a SAK, but don't have much love for that steel. It's easy to sharpen and takes a nasty edge, but that edges doesn't last long when you really lean on it. I really prefer S30V as a standard option steel, which happens to work great since Spyderco seems to agree.

-I really like wharncliffe blades. I wish Spyderco made more of them. In a perfect world, every knife Spyderco makes would have a wharnie version like the Centofante 3/4 duo. I just don't know how i'd handle something as insanely badass as a wharncliffe Military or Para 2....wow.

-Screw construction, and more importantly screw pivots. I can't say a lot to knock the pin construction Spydercos...there's really nothing wrong with them from a performance aspect, i just like the option to take a knife apart for modifications if i choose to. I do prefer a screw pivot though.

-Pillar construction. This goes hand in hand with compression locks, but also liner locks. I like the ability to rinse out the insides of my knife and air them out. I also really like to be able to look inside the knife and see how the locking mechanism works. Again this is one of those things that won't keep me from buying a knife, but the knives i really love the most have this feature.

I'm sure there's more..
How you carry yourself is just as important as what you carry.
~David
Top

I like spyderhole, 50/50 finger choil, decent steel. 3-3.75" blade length, depends on occasion. Primary EDC 3.5-3.75" are near perfect. Second knife or dressy knife - 3" is max. I prefer but this is not a must: FFG blade, midlock, low riding pocket clip. Strongly prefer natural materials for scales, but micarta and polished G10 can be fine for EDC. May be one day I will have my perfect knife.
"People sleep peaceably in their beds at night only because rough men stand ready to do violence on their behalf"

David - are tastes are almost identical outside of the wharnie thing and caged ball-bearing lock, which I am indifferent to. Scary. I may have my wife call you next year when it's time to shop for Christmas. You will probably already know what I want before I do.
Top

Easy lock- I think locks are overbuilt and just IMO, if I cannot break a lock by smacking it into a table spine first, it's good. So basically liner locks for me, although it really doesn't matter.
Plain edge or serrated, not both.
Deep choil, or some way to keep my hand from sliding forward
50 50 choils are not my favorites at all. I like the knives that use all the blade space. Unless I'm going to somewhere with length restrictions. Then blade:handle ratio can be skewed.
Pocket clip doesn't matter, I holster all my knives.
Around 4", unless length restrictions.
Carry a sharp knife, and life will never be dull
Top

Evil D wrote: i'm realizing i don't really have a cookie cutter taste in what i like and don't like. I used to think i did,

For light carry I like slim and light. For harder work and security knives with 3d sculpted/swelled handles, pinky ramps, etc.

Generally it depends on the mood or task at hand

I find that there is no one perfect knife. I am currently carrying 2 or 3 knives to do various tasks. I wonder if it would be practical to have a knife that has a 3" leaf shaped blade on one end and a small 2" blade on the other end and each blade have a lock?
Top

The Deacon wrote:Plain edge blade is a must and, unless it's a DA/OTF auto, so are a Spyerhole opener, midlock, and 50/50 choil. Full flat ground blade and smooth stainless bolsters with natural scales are icing on the cake, but I'll carry pretty much anything except peel-ply G-10. For me, this one is about as good as it gets.

Deacon, THAT is a good looking knife. I would be proud to carry something like that. Which model is it?
Top

I like knives that are thin and light with a blade of at least 3" and preferably larger. It also has to have a comfortable ergonomic handle with some level or protection from the blade. It also should preferably be black G-10, carbon fiber, or have natural wood scales and have a deep pocket clip. For a guy like me who only uses the Sharpmaker VG-10 steel is preferable. The knife that fits this bill the best for me is the Spyderco Junior.

P.S. Deacon's knife is a Spyderco Stretch that was customized with wood scales and given to Paul by Sal. I know this because Paul likes to show it off frequently to torture us normal folk who can't get one.
The important thing was that I had an onion tied to my belt, which was the style at the time. You couldn't get white onions, because of the war. The only thing you could get was those big yellow ones...
Top

One-hand operation is essential for me: pocket clip, thumbstud/thumbhole, liner/compression/axis/frame lock.
I like a good steel, preferably CPM154 or better although I have some less expensive knives with lesser steel
I like G10 scales although I do have a few less expensive knives with FRN
Plain edge almost exclusively
I like a keen point, non-recurve

I make exceptions to some of these depending on the knife, the price and the intended use.
Top

Right now my perfect folder is the Szabo. Call it what you will but I love the design and have always wanted a military with a comp lock. Unfortunately spyderco never made such a knife but the Szabo is as close as it's gonna get. The comp lock is one of my favorites as well its pretty much impossible to fail with regular knife usage and even with some extreme use. I prefer longer blades but I usually carry multiple knives and always have a spin on me for when times call for a very discreet cut. I would have preferred G-10 scales but everyone is telling me how beautiful the Szabo is and how huge it is. I just rather have and not need than need and not have
Top

Onionman wrote:P.S. Deacon's knife is a Spyderco Stretch that was customized with wood scales and given to Paul by Sal. I know this because Paul likes to show it off frequently to torture us normal folk who can't get one.

Although I like to think that I show it off in the hopes it will generate sufficient interest to convince whoever was considering sponsoring it as an Exclusive, or an alternative sponsor, that it's worth the risk.
Paul
My Personal Website ---- Beginners Guide to Spyderco Collecting ---- Spydiewiki
Deplorable