We are sorry to announce that Mr. Bob Lum has passed away.

He is survived by his wife Jean and their son Eli. We extend our deepest condolences.

Bob was a custom knife maker extraordinaire. It is a sad day in the knife industry.

My Condolences to Sal and anyone else that knew Mr. Lum. His work is very impressive.
Shawn
Top

Bob will live on through his knives which are now in the hands on many. 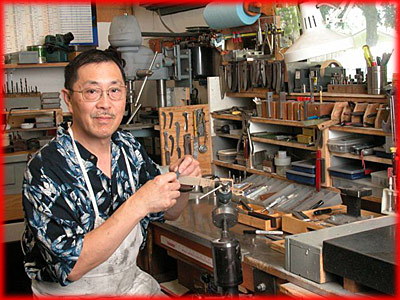 (image credit: http://www.boblumknives.com)
><> The most important blood trail leads to the Cross <><
C09 CoPilots My Specialty
Integrity is Being Good Even if No One is WatchingTM
Looking for: C04 Executive plain edge, C09 CoPilot plain edge with brass liners and a G-2 marked blade
Top

It's sad to see him go. He was a very talented guy, and very prolific with his designs. No doubt he has inspired other makers, and we know he had a bunch of fans of his designs. I'm not sure of his age but he seemed pretty young. My thoughts go out to the family. Joe
"A Mastiff is to a dog what a Lion is to a housecat. He stands alone and all others sink before him. His courage does not exceed temper and generosity, and in attachment he equals the kindest of his race" Cynographia Britannic 1800


"Unless you're the lead dog the view is pretty much gonna stay the same!"
Top

I knew Mr. Lum only through his exceptional collaborative work with Spyderco, but I am saddened by his passing. My condolences go out to his family.
Top

Very sad news indeed. He was an inspired and creative artist. My thoughts are with his family.
Top

That is sad news indeed. I had the pleasure of meeting Mr. Lum this past February at a knife show in NYC. We chatted for about 15 minutes -- he had recently been hired by BM, and was proud of his new designs. A very nice man, and clearly full of talent. My condolences of his family and friends.

Thank you Mr. Lum for your designs and integrity. My condolences to the familky. RIP knifebro
Top

My condolences to all who knew him.
So many knives, so few pockets...

I'm very sorry to hear that.

My condolances to those he has to leave behind.
Arend(old school Spydie lover)

MEMBER OF THE INTERNATIONAL ORDER OF THE SPYDEREDGE!!!

...I would love to have one in full SpyderEdge:p
Top

My condolences to his family. I never had the opportuity to meet Mr. Lum but it is a sad day for all of us. The world needs more people of his stature.

He will be remembered even by people who never met him.
Not really all that slick

Indeed, the knife community has lost an icon. I heard last night about this and was just so shocked I wasnt sure what to say. I had the pleasure of talking to him a couple of times. Such a nice warm hearted gentman. I am sad to see him go. He will be missed.
Brad Southard

"Whatever you do, work at it with all your heart, as working for the Lord, not for men," Colossians 3:23
Top

Those of us that are blessed enough to own (and USE) one of his incredible contributions to the Spyderco line will raise our glass in his honor this evening. Godspeed to you, Bob.
Top

My condolences to his family. I did not know him but love his knife designs.

Collector 118
What goes around, comes around
Top

My deepest condolences to all his loved ones and may he live on thru his knifedesigns and more.
His name has been engraved in steel and may his name live on forever, in the true honor he deserves.
He has put a joyous smile on alot of knifecollectors and knifeknuts around the world with his great knife designs.
Top

Sad news indeed... my condolences go out to his family...

brian
"All paths lead back to the Spyderhole..."
Top

Sad news, he was a very talented, and exceptionally gentlemanly person. My condolences to his family.
Paul
My Personal Website ---- Beginners Guide to Spyderco Collecting ---- Spydiewiki
Deplorable