Not sure where I found this pic. Most of the knives here are well-known to most of us. But what is that thing I have indicated with an arrow ? Never seen it anywhere before. Was it even a Spyderco prototype ? It looks like something for cutting carpets !

I just hope that I have not let a big Spyderco secret out of the bag ! I doubt it, but you just never know. Does anyone know what it is and what happened to it ? I cannot really see it being used for EDC or MBC ! 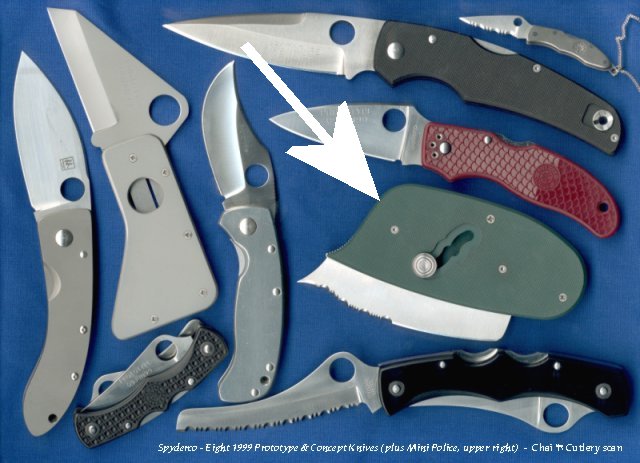 Dunno but I love the pic. can ya repost it without the arrow

More of what does not work will not work. Robin Cooper, Rokudan; Aikikai.

There is great power in the profound observation of the obvious. John Stone, Rokudan; Aikikai
Top

That is an Ulu with a retractable blade...Ed
Top

Ulu ???? Never even heard of it. Could anyone shed more light on this ?

Anything to oblige ! Here is the pic sans ugly arrow. 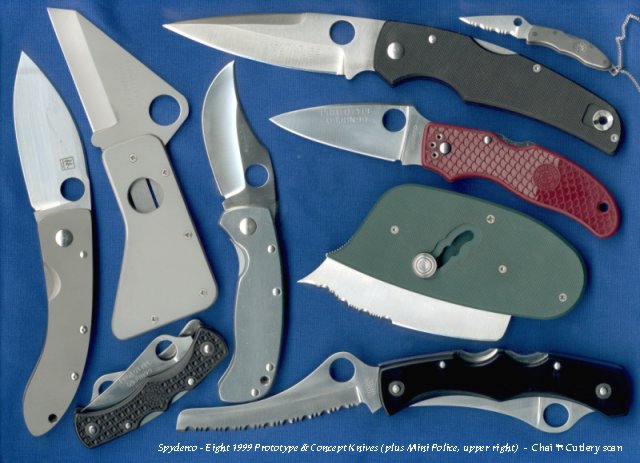 Ed Schempp wrote:That is an Ulu with a retractable blade...Ed

Could you please explain?

Thanks ST, I assumed(first mistake) that Ulu was a model name, not a general name.

Isn't that a modern day version of what eskimos use to skin their foodstuffs? I even recall an Uluchet...oh man, I am now showing my age with that one!

Proverbs 16:3...Commit YOUR works to the LORD, and YOUR plans WILL succeed!

I know its a little OT here, but the CHIEF looks great, I mean the BIG Native!!!
"Having a dull knife is like having a stupid friend."
Top

Now that we know WHAT an ulu is, maybe someone will explain what it is doing surrounded by these great knives. Is Spyderco about to launch this one in Northern Canada ?
Top

The green g10 ulu was a prototype model. And the big cheif is a renegade model from the eighties. Plus a titanium chinesse folder!
Top

I actually have an ulu from up North and they are supposed to be good knives. For some reason, I think they were often carried by women as a utility/food prep tool.
Top

More of what does not work will not work. Robin Cooper, Rokudan; Aikikai.

There is great power in the profound observation of the obvious. John Stone, Rokudan; Aikikai
Top

My family always had an Ulu sitting displayed on the mantle/shelf at the house (AK born & raised), and she dropped it on her leg while dusting once, it got her pretty good, she still has pain on that spot to this day (12+ years). they are mighty cutters, and not exactly ergonomic, ALL blade.

It was a concept knife of an Ulu style blade developed 5-6 years back and Sal showed it at a couple shows for feedback (including Blade Show I think 1999 or 2000). The picture was taken before we established our "no photo of concept knives policy".

It was designed primarily for the person who cuts boxes and cardboard- think UPS, postal and FedEx employees. Unlike traditional ulus it had a sharp tip. It had approx 2-1/2" of cutting edge on a blade that was only 3/4" long, an interesting premise. Also it was what I liked to call an anti-auto. It manually opened but the blade spring retracted back into the handle when you pushed a button on the backside by the clip. Just my opinion but I think at the time Sal showed it, it was just too far out, too specialized and maybe even too innovative for the knife public. It was, and still is, a great concept! No production plans in the works.

Thanks for that explanation. Problem with it i, it does not have the characteristic "hole", but I guess there was another way to deploy it.

Chad, you are showing your age by calling them Eskimos...they like to be called Inuit now

Neat, would love to see it in the open postion

Yes, it's an old pic by the late James Mattis. Who had access to a lot of nice spydies. Nice to see that old burgundy caly proto again, now we have a better one with ZDP! I got to play with the Ulu concept model during my visit and the ergos are quite good actually. The proto was a bit stiff for my 'spydie hole accustomed' fingers, and I'm sure that most ELUs won't think much of this knife. Too bad, I think it would be a nice sheeple friendly knife. No dangerous points or curves and it closely resembles a box cutter.

CKE wrote:Chad, you are showing your age by calling them Eskimos...they like to be called Inuit now

Neat, would love to see it in the open postion


The Ulu in the pic, is in fact in the open position. Unless you meant you wanted a look at the inside of the knife.