How about a "Pelican"

How about a "Pelican"

I love my Cara Cara2, but I always think, folded up, it looks a bit more like a Pelican than an eagle. Which got me to fantasizing....

I know it's supposed to be a "value" line, but what about something salty in the Byrd's nest?

In my version of the fantasy, it's got similar lines to the Cara Cara, maybe even the same handle, but in a yellow or orange FRN with the bidirectional grippy bits. Field cleaning a fish can get pretty slippery so I think the G-10 would get mucked up pretty quick.

Near the tip, my precious Pelican would have a "gut hook" on the dull edge similar to a lot of deer hunting knives. Now, I've never found those all that useful on a deer, but it's handy as hell for cutting lines when fishing, especially when you have to do it in a hurry- just drag the back of the knife across the line. It's hard to explain why this is better than just using the front edge. but it is. It has to do with control.

Speaking of, I'd run those huge Spyderco serrations the full length of the blade, and I'd keep the tip sharp for certain other unsavory fishing tasks that require puncturing things with scales on them---fish --alligators---dragons, you know the sort of thing. So, no "rescue" tip in other words.

Finally, and this would be the big ask, something made of steel with a little more SW corrosion resistance.. Then again, my Hawkbill has been to the pier twice and wade fishing three times---and it hasn't rusted at all. Probably because I obsessively clean and oil my knives. I've replaced enough fishing gear to habitually freshwater rinse and oil ALL THE THINGS ASAP after getting out of the water.

If you could make the Pelican inexpensive enough, I could probably get by with the Cr8MoV steel, knowing that if I screwed up and forgot to FW rinse and oil it, I could get another one on the cheep.

BTW: I think part of my fascination with the Byrds is because of the bird names. And I think the hole looks more like a bird eye than a comet. Probably just me.

I'm not a birder, but I take a lot of pictures of them as a pastime. Here is a shot of a Brown Pelican I got at Port Aransas back in July. 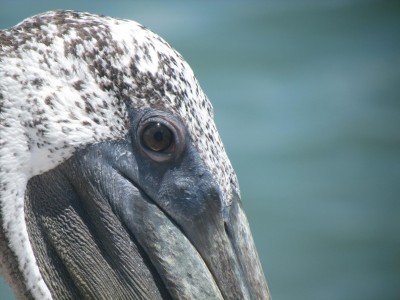 I'm only using black until Spyderco comes out with something darker.
Top

You're going to have to come up with a new name.

The Pelican is the name of a discontinued Byrd.

Thanx for the suggestion, but I think the design would please you, but not enough of the general market to be successful for us.

Another suggestion is to add the hook/single serration into the spine, perhaps on the Rescue model. In that case no new design required.

If sharp tip is required, a regrind by user can be done to this Rescue model, similar to what Surfingringo does.
Chris