I've had a Byrd Hawkbill for a few months it's my do anything knife. I've been so impressed by Byrd quality that I needed to have another. I really wanted to give 8cr13mov a try in PE. My brother does with well with his Tenacious, I just touch it up for him occasionally. There is a

dealer across town that I checked out for the first time today. As usual the selection of

was sparse mostly consisting of the budget line. They had one Byrd the Cara Cara 2. 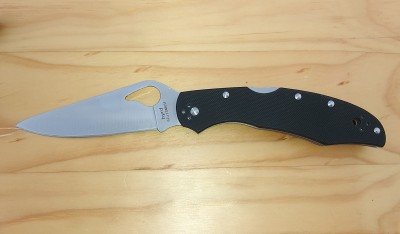 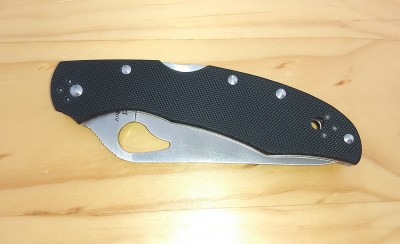 Once it was in my hand I knew I had to have it. The fit and finish blows me away. I would say they have improved since my Hawkbill was made. This knife would have never appealed to me if it wasn't for the Manix 2 turning me into a large knife guy. For some reason I thought it was bigger than the PM2 but not really. I guess I need a Millie now. 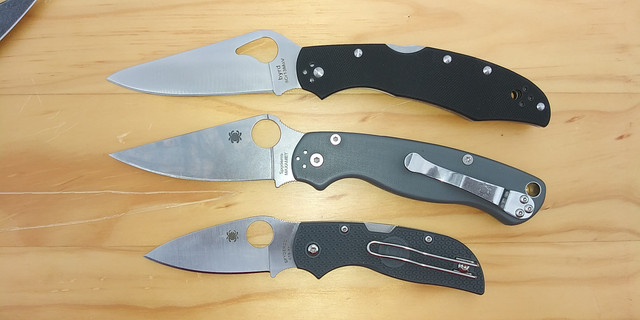 Is the Cara Cara hiting way above it's price or is it just me? This knife really blew me away and that was back to back with knives over 4 times the price. Because of the price I expected some weird quirk or something. Well I couldn't find one, only tons of performance! It cut as good as the Chap even with its thicker 3mm blade stock. The CC2 never developed any hot spots. Its large handle gives plenty of grip even for tougher cuts. It did exceptionally well considering its price much better than I would have thought. Looking at the specs you wouldn't think it would do so good having 3mm blade stock. It actually has a significant distal taper resulting in ⅔ of the blade being sub 2mm. That's why I try not to shop by the specs anymore. You need to get the knife in hand to feel how it truly performs.
Top

Absolutely!!! I first tested the Byrd waters with a Hawkbill. Ordered from Wally Mart so I had to pay tax, but I figured if it was deficient in any way I could just return it. Much to my surprise it was centered and locked up like a bank vault. Not quite drop shotty, but the slightest flick of the wrist and the choil was on your fore fingernail. I figured I just got lucky and that was the best $25 I ever spent on knives. A few weeks later I happened to stop by a local brick and mortar Mom & Pop surplus store and saw that they had a Byrd Cara 2 Rescue in the case. They don't do MAP but I asked to examine it anyway. I leaned on that thing every which way but loose............actually not loose. There is a recent thread about blade play and this thing (and the Hawkbill) has absolutely no play in any direction. Spydie flickable and drop shotty, too. I paid 20% over MAP plus tax and was happy to do so. The Hawkbill is now drop shotty, too. There is a lot of buyer-be ware sentiment among the knife community regarding Chinese made knives, but as far as I'm concerned, Sal has removed that concern from the table. They may not tickle a steel snobs fancy, but in my limited experience they are solid, solid, solid.
Top

Joshcrutchley1 wrote: ↑
Fri Apr 09, 2021 6:00 pm
Is the Cara Cara hiting way above it's price or is it just me? This knife really blew me away and that was back to back with knives over 4 times the price.

It actually has a significant distal taper resulting in ⅔ of the blade being sub 2mm.

I feel the same way, it does hit higher than it's class, even with left over scale glue

This blade geometry is such a slicer.
Top

Being in the ranch , hunting and fishing industry, the CC Byrd really does box two above it’s weight class, I keep a couple of CC’s and meadowlarks in my work trucks and offshore boat
I have no problems using them to clean wild hogs covered up in sandy dry mud, or slicing up 200
Feed bags in a day, now 8cr13mov does require some slight maintenance after some heavy abuse, but I don’t mind in retrospect to trying get my S90v chips ground out or taking time to resharpened, great addition to spyderco for guys who can’t drop $200+ on some exotic steel
Top

I don’t tend to duplicate purchases but like them, (CaraCara), so much I have one of each blade variant.
Std, Rescue and wave. All are great in fit, finish and ergo’s.
'The future is already here;it's just not evenly distributed'
William Gibson
Top

I have the rescue version and I couldn't agree more with you. I think that it (favorably) compares to knifes 3x or 4x times its price.

I could say something similar about the Meadowlark and its peers in size.
Si vis pacem para bellum